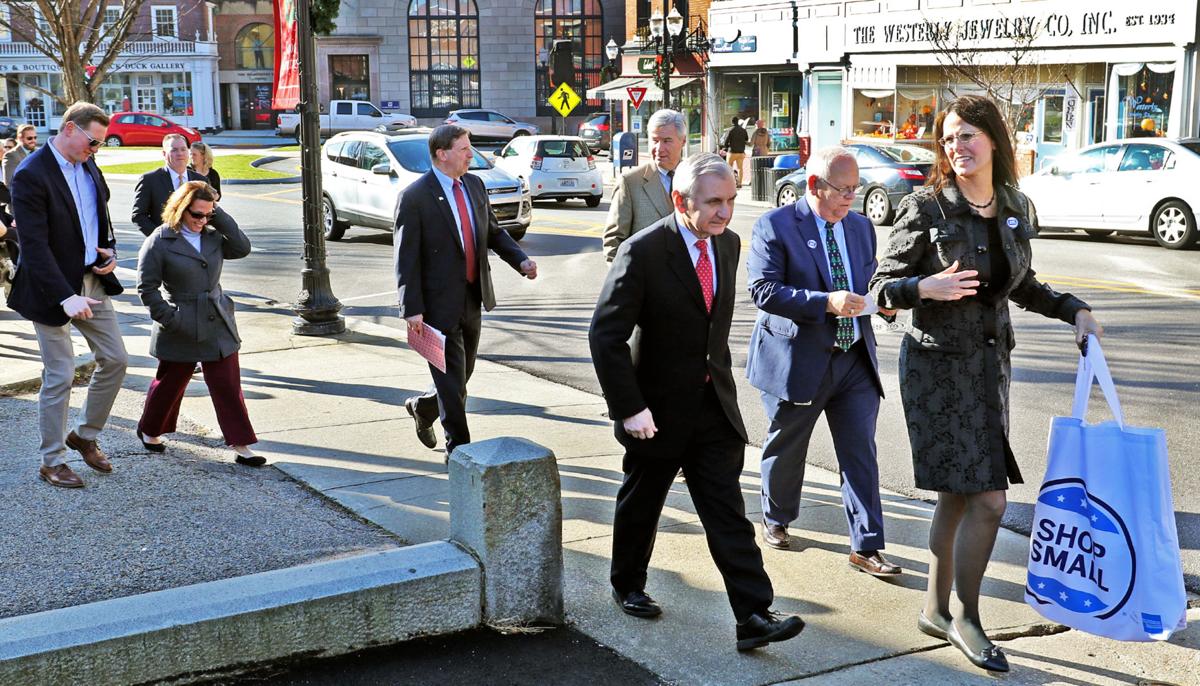 Lisa Konicki, president of the Ocean Community Chamber of Commerce, led a delegation of government, business and philanthropic officials on a tour of eight downtown businesses Tuesday as part of a promotion for Small Business Saturday. Among those in the group were U.S. Sen. Jack Reed, foreground in the dark suit, Mark S. Hayward, to his left, Rhode Island district director of the Small Business Administration, U.S. Sen. Sheldon Whitehouse, and Neil Steinberg, president of the Rhode Island Foundation. Harold Hanka, The Westerly Sun 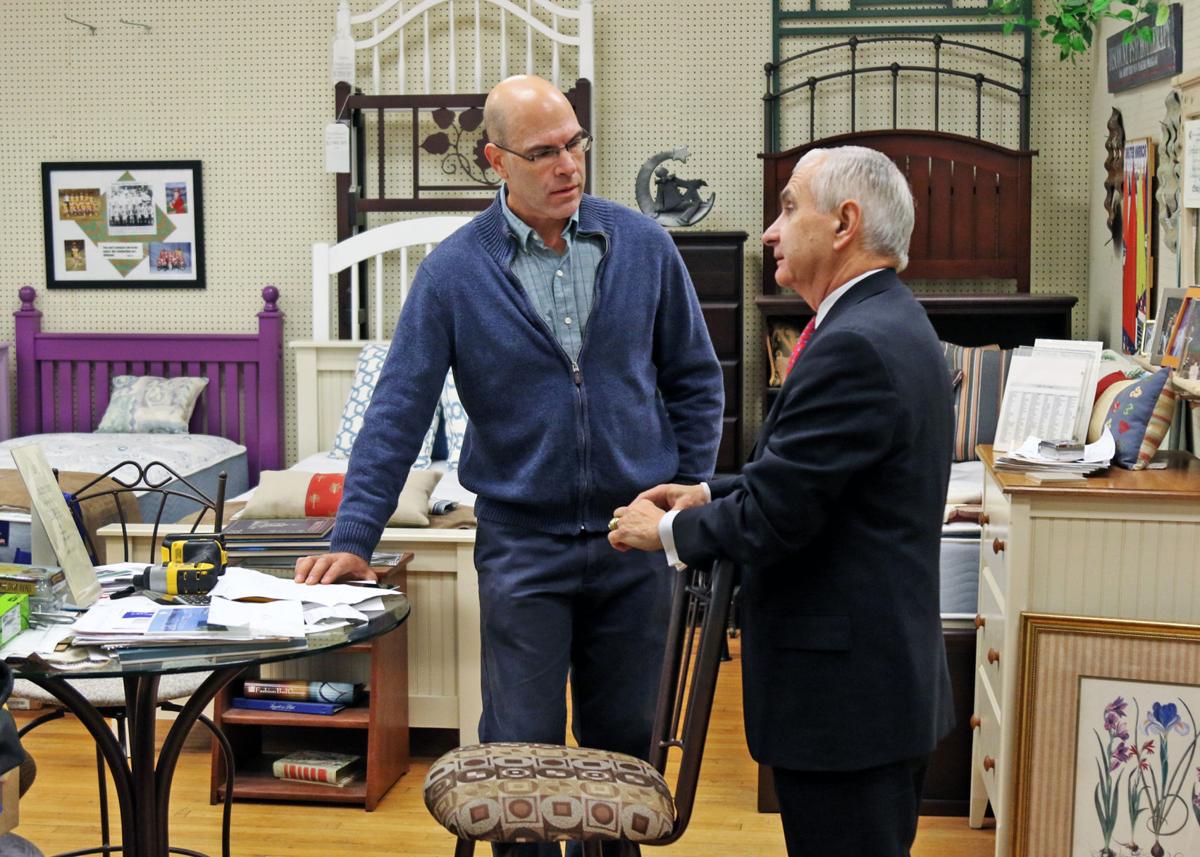 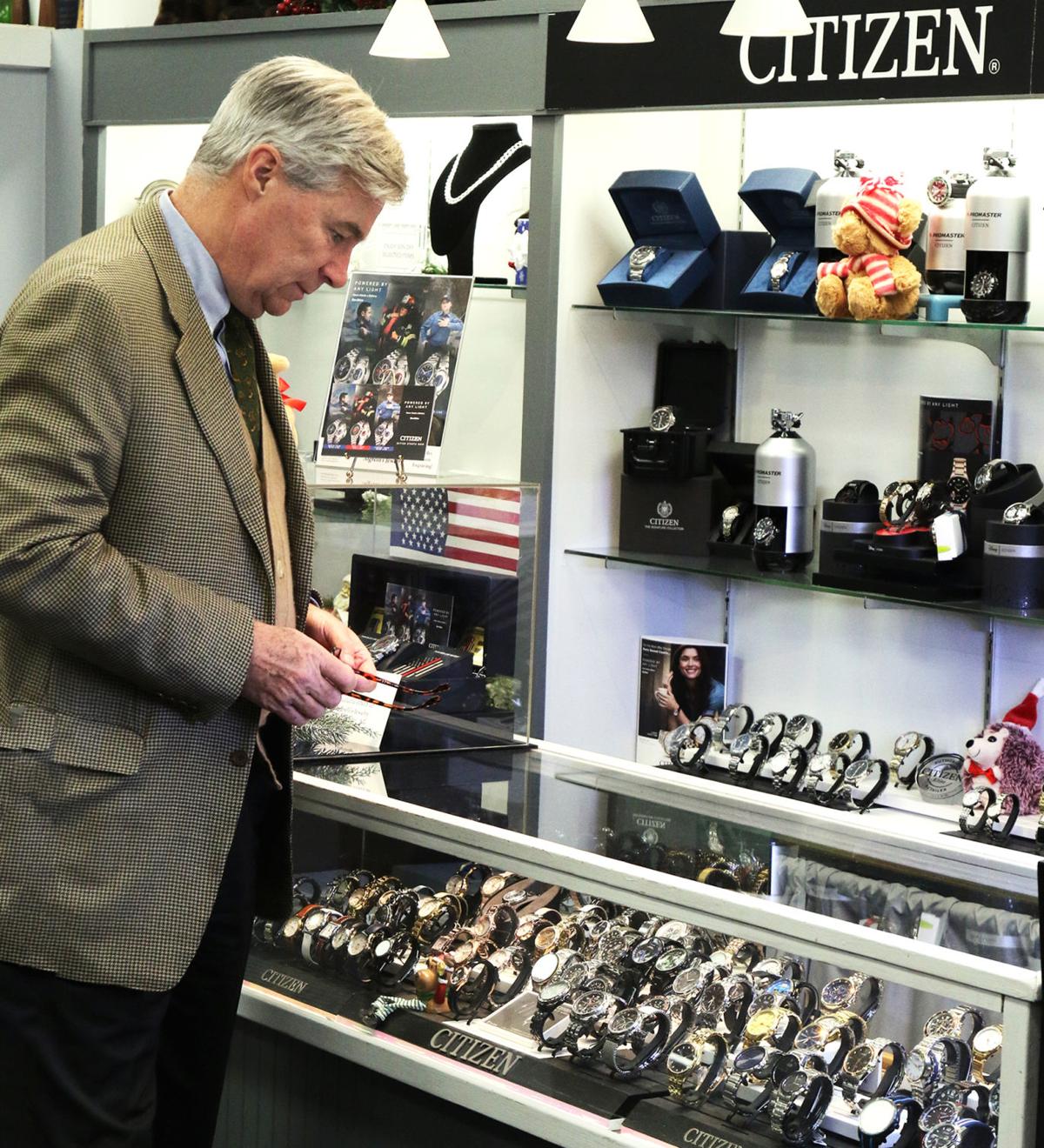 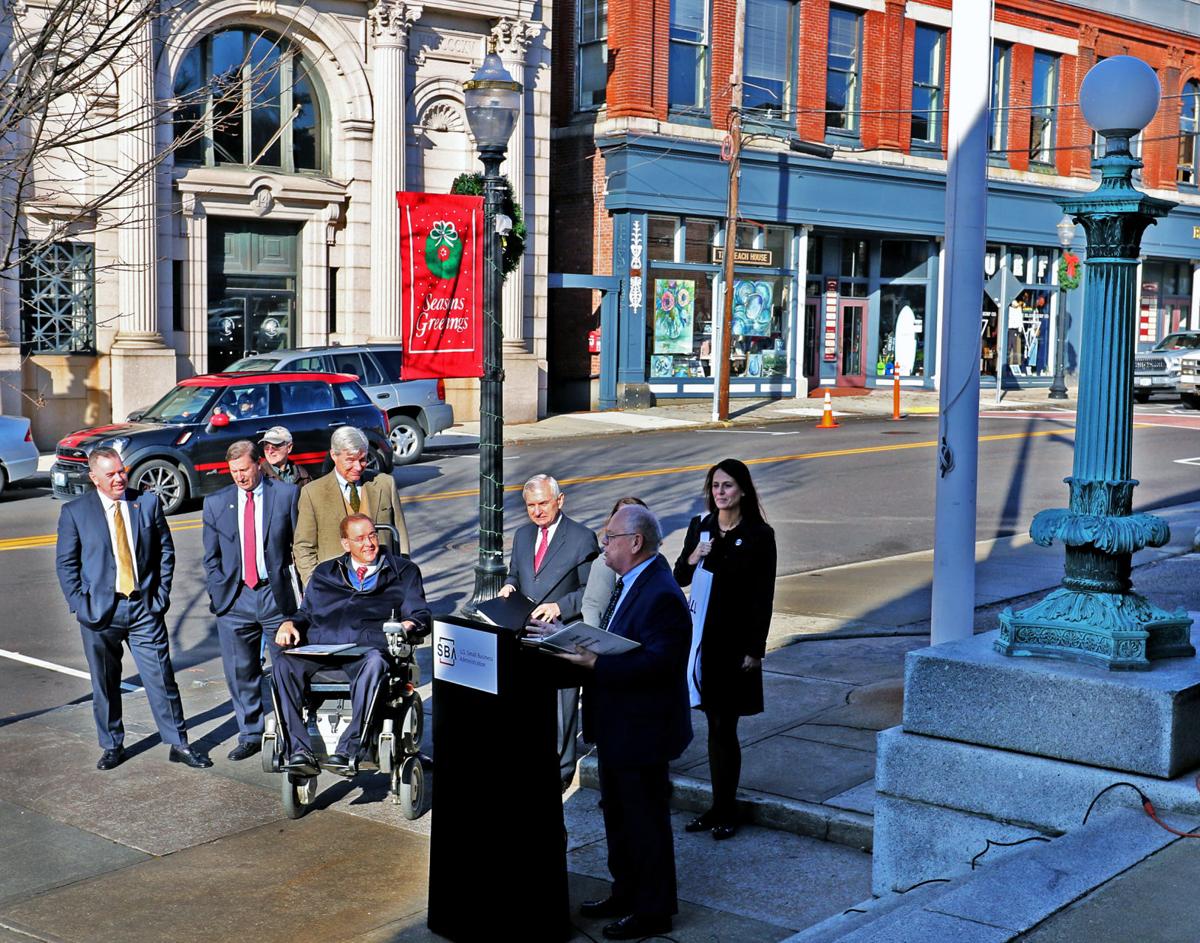 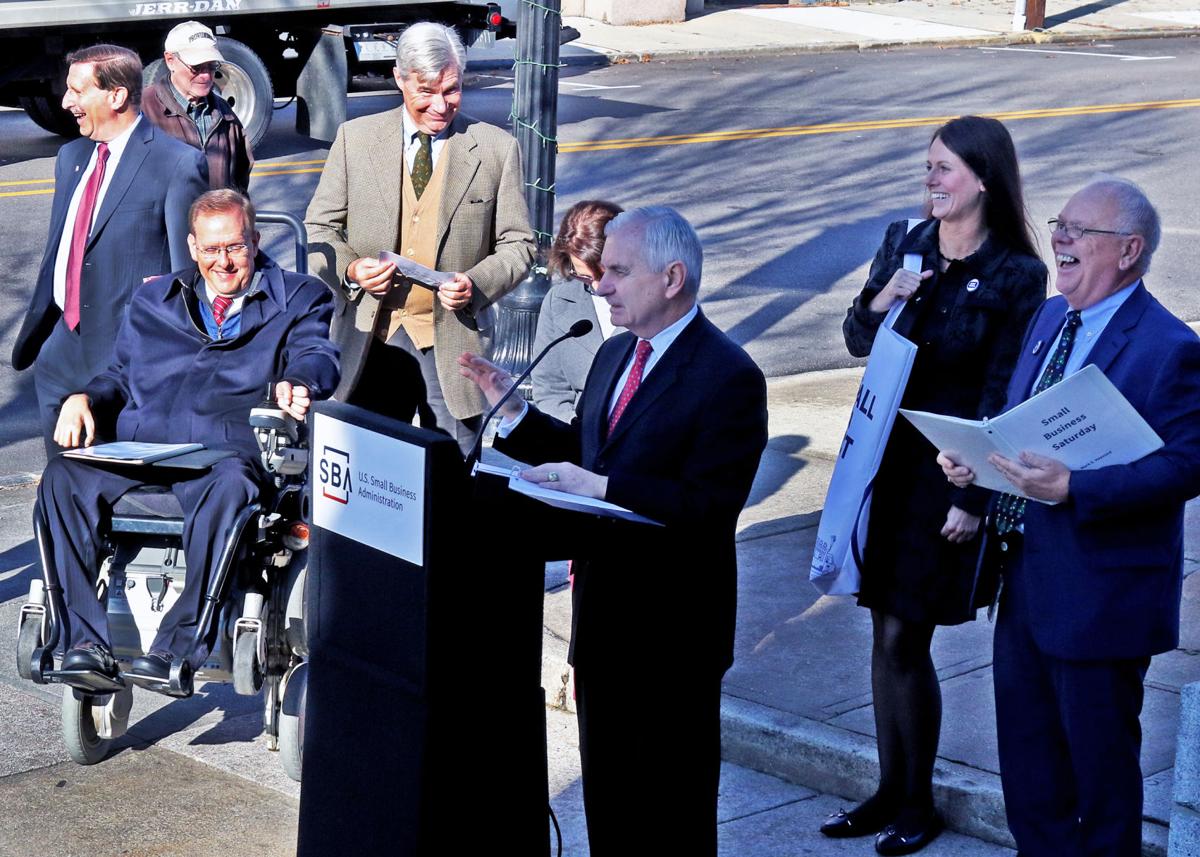 Lisa Konicki, president of the Ocean Community Chamber of Commerce, led a delegation of government, business and philanthropic officials on a tour of eight downtown businesses Tuesday as part of a promotion for Small Business Saturday. Among those in the group were U.S. Sen. Jack Reed, foreground in the dark suit, Mark S. Hayward, to his left, Rhode Island district director of the Small Business Administration, U.S. Sen. Sheldon Whitehouse, and Neil Steinberg, president of the Rhode Island Foundation. Harold Hanka, The Westerly Sun

WESTERLY — One of the customers in Walle Hutton's Rhode Island Surf Co. shop on High Street stood out from the rest on Tuesday. It was U.S. Sen. Sheldon Whitehouse who picked up a hooded shop sweatshirt for someone on his shopping list during a jaunt  through the downtown area.

The third-term senator was joined by a cadre consisting of other members of the state's congressional delegation, federal officials, members of the state's philanthropic community, and local business leaders for a walking tour aimed at encouraging shoppers to descend on the area this weekend for Small Business Saturday.

Organized by the federal Small Business Administration in conjunction with the Rhode Island Foundation and the Ocean Community Chamber of Commerce, the tour started with remarks from Whitehouse, his colleague, U.S. Jack Reed, U.S. Rep. James Langevin and others.

Hutton was thrilled to welcome the officials into the store he opened in May.

The speaking portion of the tour focused on the economics of shopping in stores that are owned by local people.

"When you shop in a big box your dollar bounces once in the cash register at the big box and then goes right of state to wherever the headquarters is, but if you shop at Herbwise the owner might go to Woodees and buy something or go down to the Black Duck Gallery or go to Cahill & Co. or to Westerly Jewelry and the funds circulate in the community," Whitehouse said.

In addition to boosting the local economy, Neil Steinberg, president of the Rhode Island Foundation, said choosing to support local businesses is an important community gesture. "The point about the financial benefit is well made, but it's also civic. It is the small business owners who are the Little League and soccer coaches and the chairs of the Chamber and the people who run for local office and who give back to the community."

Small businesses are  an essential component of the community's fabric, Langevin said.

"I know how important small businesses are to our people and the challenges that small businesses face. If we don't support them they will go away and that will forever change the character of our state and the community ... these are our neighbors and our friends who are working in these shops," Langevin said.

Celebrated each year on the Saurday after Thanksgiving, Small Business Saturday was developed and is promoted by the SBA. On the nine prior occasions the day has been celebrated, an estimated $103 billion was spent nationwide with small businesses, the agency said.

About $17.8 billion was spent last year in the more than 7,000 communities that participated in Small Business Saturday, according to Wendell G. Davis, SBA regional administrator.

Ocean Community Chamber of Commerce volunteers will be deployed to businesses throughout the region on Saturday looking for local shoppers in small businesses and presenting $10 gift certificates to more than 30 lucky shoppers. Lisa Konicki, the chamber's president, said Small Business Saturday aligns with one of the chamber's mantras.

Joseph Miceli, owner of Miceli's Furniture, called Small Business Saturday "an important community building day and I appreciate the congressional delegation taking the time to come to visit Westerly to highlight small business and the community that supports the businesses. It validates and acknowledges the support."

Over the course of more than two decades in his current location, Miceli said he has been "gratified to see the town blossom. When we moved here in 1996 the town was nowhere near as vibrant as it is today."

As new businesses, restaurants and bars open up in the downtown, an energy and sense of partnership builds, Miceli said.

"It does create traffic and opportunity. There's a synergy that has developed that lifts all boats," Miceli said.

At DPS Bookkeeping we can easily support coordinate all facets of your bookkeeping https://www.dpsaccounting.com.au/payroll-bookkeeping-perth/, which includes reconciliation reporting and payroll providers to take the anxiety out of managing everyday company surgical procedures.