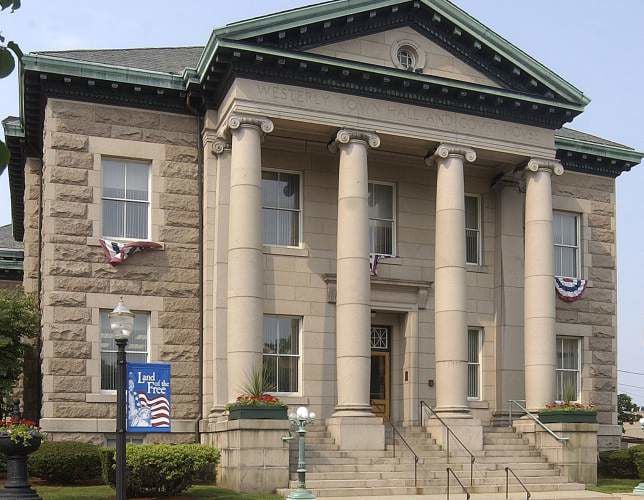 WAKEFIELD — A Superior Court judge has ruled in favor of Westerly and several current and former officials in a lawsuit filed by former Zoning Official Elizabeth Burdick that claimed town officials had defamed, conspired, and retaliated against her.

Judge Sarah Taft-Carter, in a decision filed on Jan. 15, found in favor of the town and seven officials and granted the town and officials' motions for summary judgement after finding Burdick "failed to establish that there remains any genuine issue of material fact as to her charges of retaliation under the Rhode Island Whistleblowers' Protection Act, defamation, invasion of privacy, negligence, or civil conspiracy."

Claims of negligence, violation of privacy rights, and portraying Burdick in a false light were also deemed by the judge to be unsubstantiated or invalid. The suit had named Town Councilor Christopher Duhamel, former councilors Diana Serra and Patricia Douglas, former solicitor and Town Manager Michelle Buck, former Town Manager Steven Hartford and Attorney Daniel Kinder, who worked as legal counsel for the town, as defendants. Former Finance Director Deborah Bridgham was also named a defendant in her role as former chief financial officer of the town.

The case developed following the Copar Quarries of Westerly saga that gripped the town for several years and prompted lawsuits, including Burdick's, other enforcement action and hundreds of thousands of dollars worth of legal fees.

Burdick, who served as zoning officer for about 4.5 years until February 2013,  entered into a separation agreement with the town and agreed to release claims she had made prior to leaving her job.

In late 2011, Burdick started to receive noise and dust complaints from Bradford residents who said the quarry operation was interfering with their daily lives. Hartford removed Burdick from the Copar project and, through a lawyer, sent three letters to Buck alleging unethical or illegal conduct by town officials and a hostile work environment. She also notified the town of an intent to potentially bring claims against her under the state's whistleblower law.

In her lawsuit, Burdick claimed that comments made by Hartford, Serra, Duhamel and others to The Sun and in public meetings invaded her privacy and amounted to defamation.

"... the statements made by Town functionaries, quoted in the articles published in March and April of 2013, form the basis for a number of Burdick’s claims of retaliation, defamation, and false light invasion of privacy, as well as negligence and conspiracy," Taft-Carter wrote in her decision.

The judge ruled that some of Burdick's claims were essentially wiped out by the agreement she signed before ending her employment with the town. "...whatever the potential merit of [Burdick's] claims about alleged violative conduct  contained in her December 2012 and January 2013 letters may have been, any purported  whistleblower status available to her as a result of those allegations was released through the Separation Agreement she voluntarily and knowingly signed on Feb. 22, 2013," the judge said.

The judge also found that some of Burdick's defamation claims were invalid because Burdick was a public figure even after she left her job because her lawyer, Gregory Massad, spoke during Town Council meetings about her and issues raised by Robert Lombardo, a lawyer and government watchdog, who accused the town of trying to coverup aspects of the Copar saga and Hartford's tenure as town manager.

"When an individual involves themselves prominently in public affairs and debates, they become limited-purpose public figures who have assumed the risk of defamation," the judge wrote.

Burdick also failed to demonstrate the comments she said were defamatory were made with malice, and in one instance the comments amounted to a statement of opinion, Taft-Carter wrote. At least one of the alleged defamatory statements was determined to actually be a true statement, the judge said.

Burdick also claimed that her privacy was violated when Hartford released her separation agreement to The Sun, but the judge said release of the agreement was required under the state Access to Public Records Act. Burdick also failed to provide evidence that the town released emails and other material obtained by The Sun and others, the judge ruled.

In addition to waiving her negligence claim when she signed the separation agreement, the ruling found that the town did not have a legal duty to establish a whistleblower policy aside from following state law.

Athlete of the Week: June 5th

Sponsored by Antonino Auto Group: For the remainder of the school year, The Westerly Sun will be selecting a high school Athlete of the Week. Voting closes on Tuesday at 9am and the selection will be announced on Thursday. The nominees for the week ending June 5 are as follows:

Schools across US brace for surge of kindergartners in fall