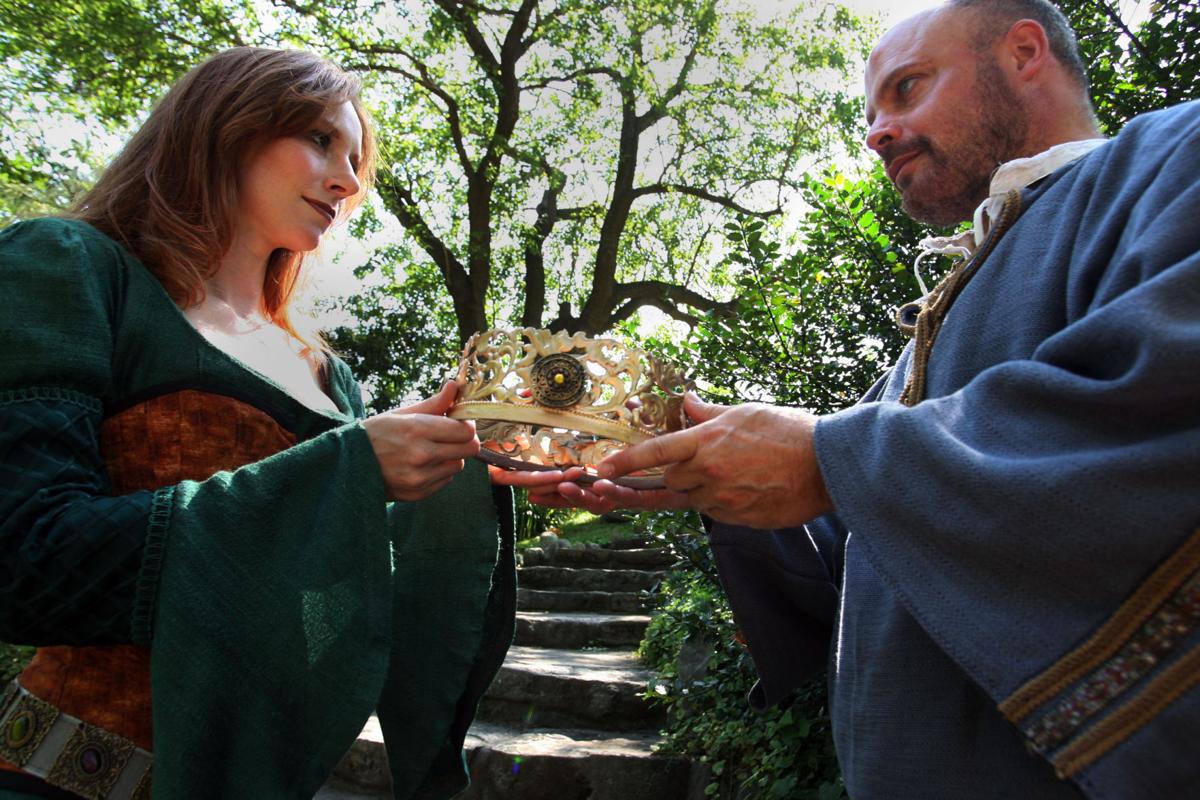 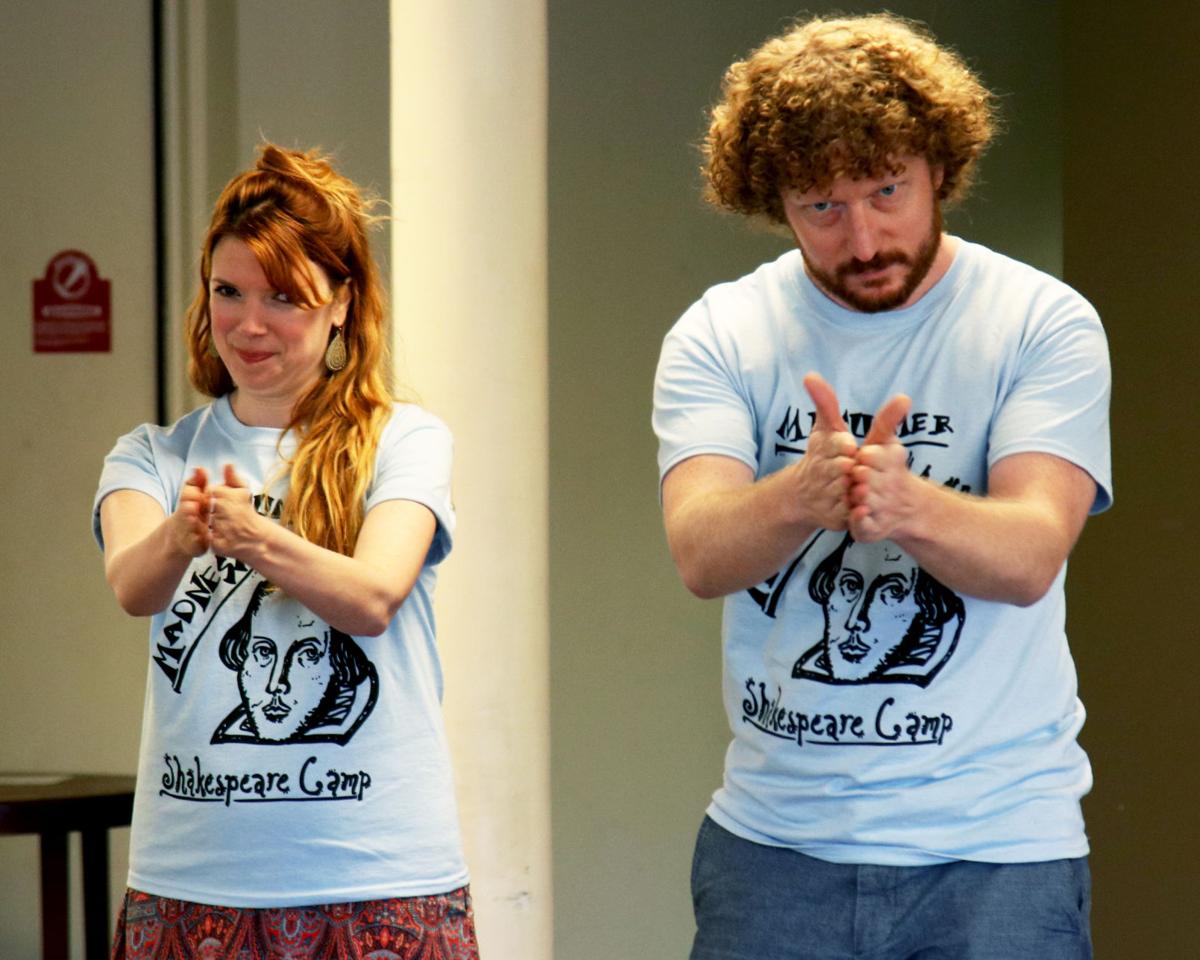 Alana Rader and Jon L. Peacock, co-artistic directors of education for the Colonial Theatre of Rhode Island, applauded campers who participated in "Midsummer Madness" — short performances from some of Shakepeare's most famous works, at the Westerly Library in August 2018. Sun file photo 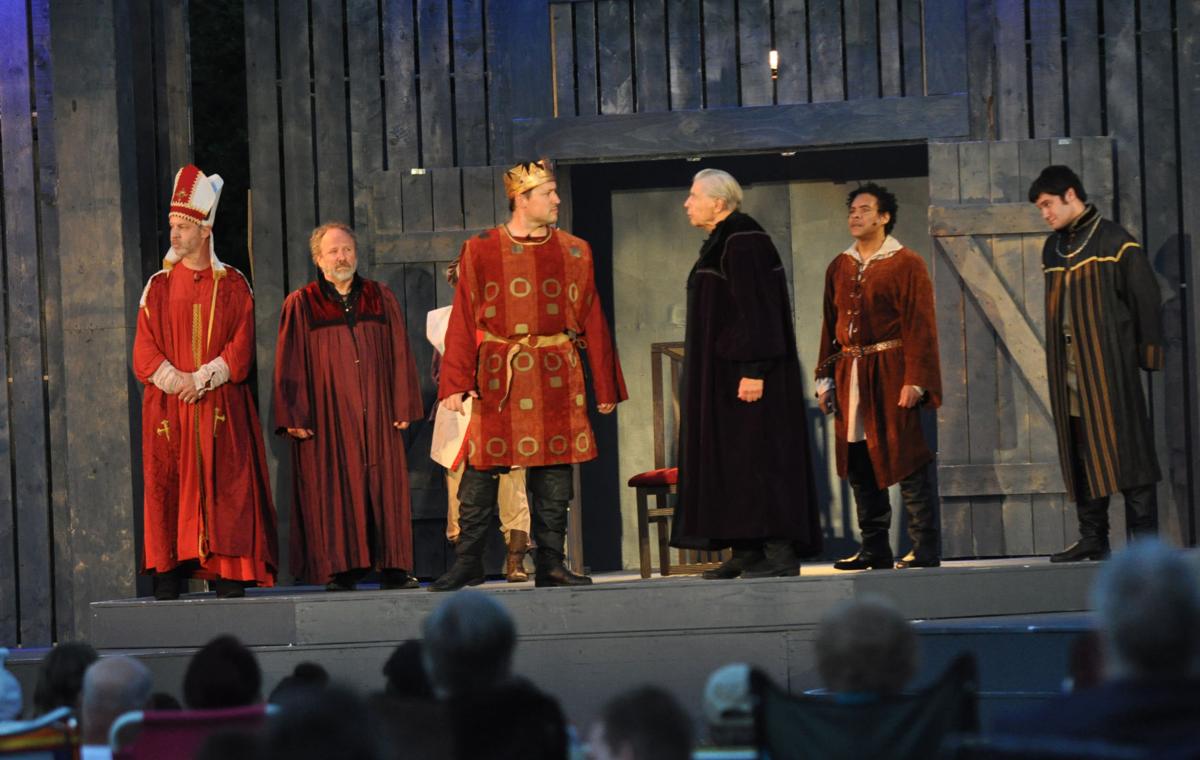 The Colonial Theatre presented "Henry V" on the 24th anniversary season of Shakespeare in the Park in Westerly. Sun file photo.

Alana Rader and Jon L. Peacock, co-artistic directors of education for the Colonial Theatre of Rhode Island, applauded campers who participated in "Midsummer Madness" — short performances from some of Shakepeare's most famous works, at the Westerly Library in August 2018. Sun file photo

The Colonial Theatre presented "Henry V" on the 24th anniversary season of Shakespeare in the Park in Westerly. Sun file photo.

WESTERLY — Shakespeare will be back in Wilcox Park again this summer. At least in the form of one of his most popular comedies.

The Colonial Theatre of Rhode Island, the company that's been bringing Shakespeare to Wilcox Park since 1991 — minus a one-year hiatus in 2018 — plans to stage "A Midsummer Night's Dream," from July 31 to Aug. 18, according to Nicholas Moore, vice president of the Colonial's board of directors.

"We are thrilled," said Moore. "We are just so excited to be continuing this great tradition in Wilcox Park and to be working with the Westerly Public Schools."

The announcement was made Monday night at an ice cream social fundraiser held at Mel's Downtown Creamery in Pawcatuck, at which cast members from "You're a Good Man Charlie Brown" — Westerly High School's spring musical, now in rehearsals — gathered to share some of the music from the show.

Moore also said that actors Jon L. Peacock and Alana Rader, hired by the board last year to head up the company's partnership with the Westerly schools, have been named co-artistic directors of education for the Colonial.

The pair will direct "You're a Good Man Charlie Brown" and run another year of "Midsummer Madness," the children's  summer camp, he said. Rader and Peacock directed last season's production of Thornton Wilder's "Our Town" at the high school, which was met with enthusiasm.

"You're a Good Man Charlie Brown" includes a cast of 13 high school students, and a technical crew of roughly 15 more, Rader said.

Peacock, who was directed by Oskar Eustis in The Public Theater's production of "Julius Caesar" in 2017, and played the role of Sir Andrew in the Colonial's 2017 production of "Twelfth Night," said the company is actively scouting for a director for "A Midsummer Night's Dream."

"We have sent out a request for proposals to the major artistic institutions in Rhode Island," he said Tuesday.

Moore said the partnership with the schools will allow for a "shadowing" situation with "A Midsummer Night's Dream," whereby students interested in the arts will be able to partner with the professionals involved in the production. Students will have the opportunity for intensive training, internships, and experience as understudies, he said.

"That means with sound, lighting, carpentry, marketing, stage managing and acting," Moore said. "We'll not only be teaching students about drama, but offering individual training."

Rader and Peacock, who also began teaching drama classes Tuesday at the high school, said they plan to tie the curriculum of all the classes into "A Midsummer Night's Dream."

The summer camp too, which is geared for young people from 7 to 18 years old, will be based around Shakespeare's comedy, which features such characters as Hippolyta, Queen of the Amazons, the fairies Oberon and Titania, and the trickster Puck.

Moore said the Colonial is grateful for the support of Westerly school Superintendent Marc Garceau, who has been vocal about his support of the theater arts.

Rader said, "We also have a brand new website, designed by Jon." She added that the company is consciously emphasizing its official name these days.

"We are officially The Colonial Theatre of Rhode Island," said Rader. She has a degree in musical theater from Kent State University, and has performed with the Ohio Shakespeare Festival and interned at New York's Looking Glass Theatre.

The Colonial Theater was founded in 1985 by Harland Meltzer and for many years was located on Granite Street. In 1991, the company began producing annual Shakespeare in the Park productions in Wilcox Park, an event that attracted thousands of theater lovers to the park each summer. In 2017, the organization began a roughly yearlong investigation into allegations of sexual harassment in the nature of a hostile work environment.

The investigation was completed in late 2018, and the board voted to keep the findings confidential, Moore, a lawyer, said at the time.

Last May, the theater announced that it would take a one-year hiatus so the organization could increase its focus on its partnership with the Westerly Public Schools. Last December, Meltzer resigned as producing artistic director to devote time to his elderly parents.

The theater's updated website can be found at www.colonialtheatreri.org.