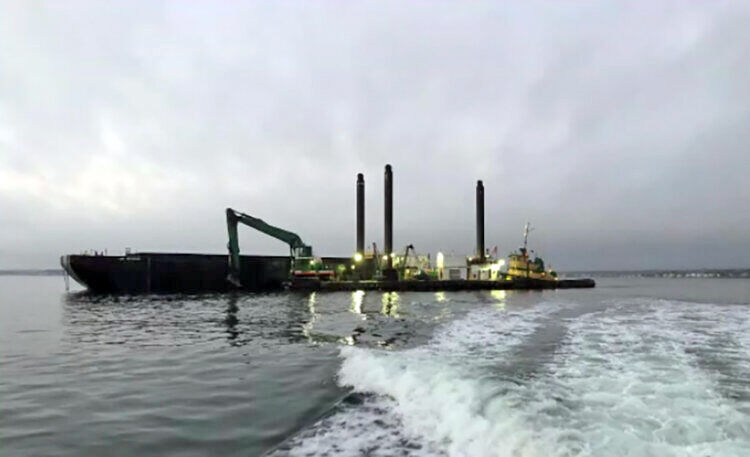 Dredging is already underway for the West Quonset Channel, which will provide a safe route for submarine travel between General Dynamics Electric Boat's Quonset Point and New London facilities. Courtesy of ecoRI News 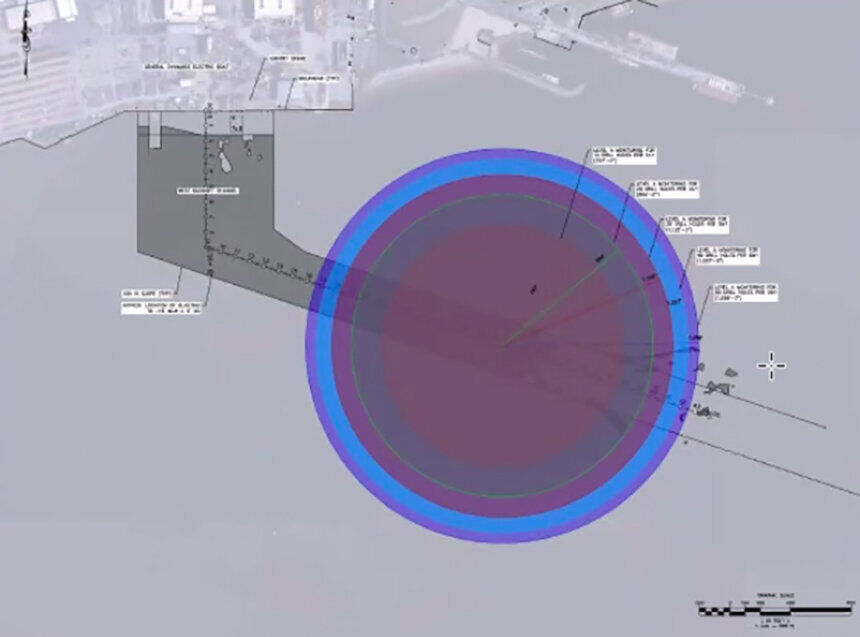 The plan includes a 1,500-foot exclusionary zone around the blast site. This area will be monitored for sea life. (Quonset Development Corporation images)

Dredging is already underway for the West Quonset Channel, which will provide a safe route for submarine travel between General Dynamics Electric Boat's Quonset Point and New London facilities. Courtesy of ecoRI News

The plan includes a 1,500-foot exclusionary zone around the blast site. This area will be monitored for sea life. (Quonset Development Corporation images)

Despite opposition from Save The Bay, the Coastal Resources Management Council (CRMC) has approved blasting a portion of Narragansett Bay to accommodate the construction of nuclear submarines.

The project, put forth by the Quonset Development Corporation (QDC), includes a new pier, Navy vessel construction facilities, and a 395-foot custom barge that will move parts of a new class of ballistic missile submarines between Quonset and New London, Conn., for defense contractor General Dynamics Electric Boat.

At its Dec. 8 meeting, the CRMC board gave a full-throated endorsement of using explosives to dislodge undersea rock to complete a new shipping channel, saying QDC had done its homework on the application. Three CRMC board members, including chair Jennifer Cervenka, cited national security as part of their reasoning to approve the project, despite the fact that military readiness isn’t something council members are asked to consider when weighing coastal development proposals.

National security, Cervenka said, “added support for this project that there is a compelling security interest here.”

CRMC board member Donald Gomez said the project should be approved for “the greater good.”

“The greater good is really the protection of the United States and getting so that we are on a parity again with the Chinese and especially the Russians,” Gomez said.

The state’s coastal zoning council is asked to “preserve, protect, develop, and where possible, restore the coastal resources of the state for this and succeeding generations.” Also, “the preservation and restoration of ecological systems shall be the primary guiding principal upon which environmental alteration of coastal resources shall be measured, judged and regulated.”

Cervenka and CRMC executive director Jeffrey Willis declined to elaborate as to how undersea blasting for a military project meets that mission.

Save The Bay opposed granting the permission to blast because of the risk of harming or killing marine life, an act often referred to as “taking.”

“There’s no way to guarantee that there will be no takes of marine mammals, specifically seals,” said Mike Jarbeau, baykeeper for Save The Bay.

Jarbeau said Save The Bay is discouraged that QDC ignored local knowledge and conditions in the waters within Narragansett Bay’s West Passage. The proposed blasting, scheduled for this month and next, approaches the peak population of seals in the bay and is taking place near Rome Point, the most populated seal haul-out site in Narragansett Bay.

Save The Bay is concerned that pressure to complete blasting before Jan. 31 “has led QDC to ignore the clear evidence that seals will be present and active in the project area,” Jarbeau said. “Based on this information, there is an extremely strong potential for seal harassment or injury.”

He noted that QDC also failed to consider alternative routes once it learned that a rocky area was in the proposed channel. “Despite that, the project proceeded, leading to these last-minute changes to address the rock in time to meet the dredging window,” Jarbeau said.

North Kingstown resident Arthur Hamilton noted that there is ample time to find alternatives to blasting since the construction has yet to begin on the new pier and the custom barge is still being built.

A former marine engineer, Hamilton suggested the use of a cutter drill to breakdown the rock. He also said the rocks could be left in place and the barge could navigate the channel during high tide.

“Explosives are the last worst thing we want to do,” Hamilton said.

Hamilton, Jarbeau, and Barrington resident Susannah Holloway argued that QDC should be required to apply for a marine mammal take authorization from the National Oceanic and Atmospheric Administration, as was required for construction of the Block Island Wind Farm.

Holloway called for a larger safety area for protecting sea life and urged that the blasting occur in summer, when flounder would likely the only threatened species.

“This sound [from blasting] is much louder and a lot more damaging,” she said.

Edward Spinard Jr., development services director for QDC, defended not having the federal take authorization, saying that blasting will be done much less frequently than the continual pile driving required to build the nation’s first offshore wind facility.

Spinard and CRMC noted that the authorization for taking wasn’t required because QDC wrote a thorough and detailed blasting plan that is designed to avoid killing marine mammals.

“A take authorization is a license to kill,” Spinard said. “We don’t want any takes.”

David Reis, of CRMC’s permitting staff, said the Rhode Island Department of Environmental Management and the Army Corps of Engineers have already vetted the blasting plan.

“It’s beyond our expertise, but it’s also beyond our jurisdiction,” he said.

Gomez was pleased that delayed pulse charges will be used to demolish the rock, so that marine life isn’t exposed to the full blast at all once.

Spinard said the rocky outcrop was missed during the original dredging survey, conducted by a previous dredging company. The new dredging contractor, Cashman Dredging, recently completed a year of blasting New Bedford Harbor, Spinard noted. That project was more than 10 times the size of the QDC project and required multiple blasts per day.

“They ended up with zero takes,” Spinard said.

To avoid harm to sea life, QDC’s plan includes a 1,500-foot exclusionary zone around the blast site. Eight biologists will watch for marine mammals from three boats before and after blasting. The blasting will occur once a day for 15 days. Underwater microphones and side sonar will be used to search for schools of fish and marine mammals. A fish-startle system will be deployed to scare schools of fish and their mammal predators out of the blasting zone. Each blast will be measured to be sure desired sound levels are met, according to the QDC plan.

“We are using every known monitoring technique to get zero takes,” Spinard said.

QDC can begin blasting as soon as it receives written approval from CRMC, which typically takes a few days after a vote is taken. Blasting must end by Jan. 31 to protect fisheries, in particular winter flounder spawning season.

Athlete of the Week: June 5th

Sponsored by Antonino Auto Group: For the remainder of the school year, The Westerly Sun will be selecting a high school Athlete of the Week. Voting closes on Tuesday at 9am and the selection will be announced on Thursday. The nominees for the week ending June 5 are as follows:

Stick & Fin brings a touch of southern California to Westerly

Neighbors charged with selling cocaine together after Westerly investigation

PHOTOS: A conglomeration of crabs at Green Hill Pond