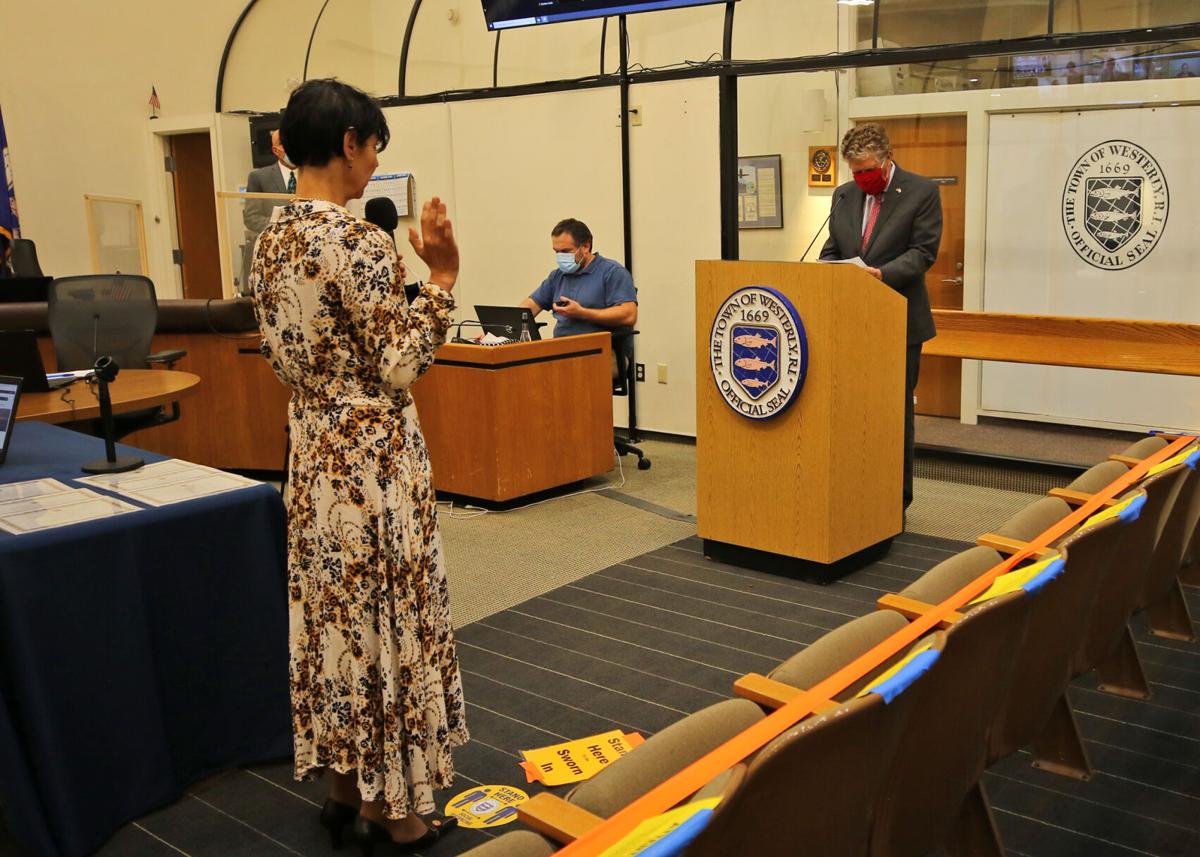 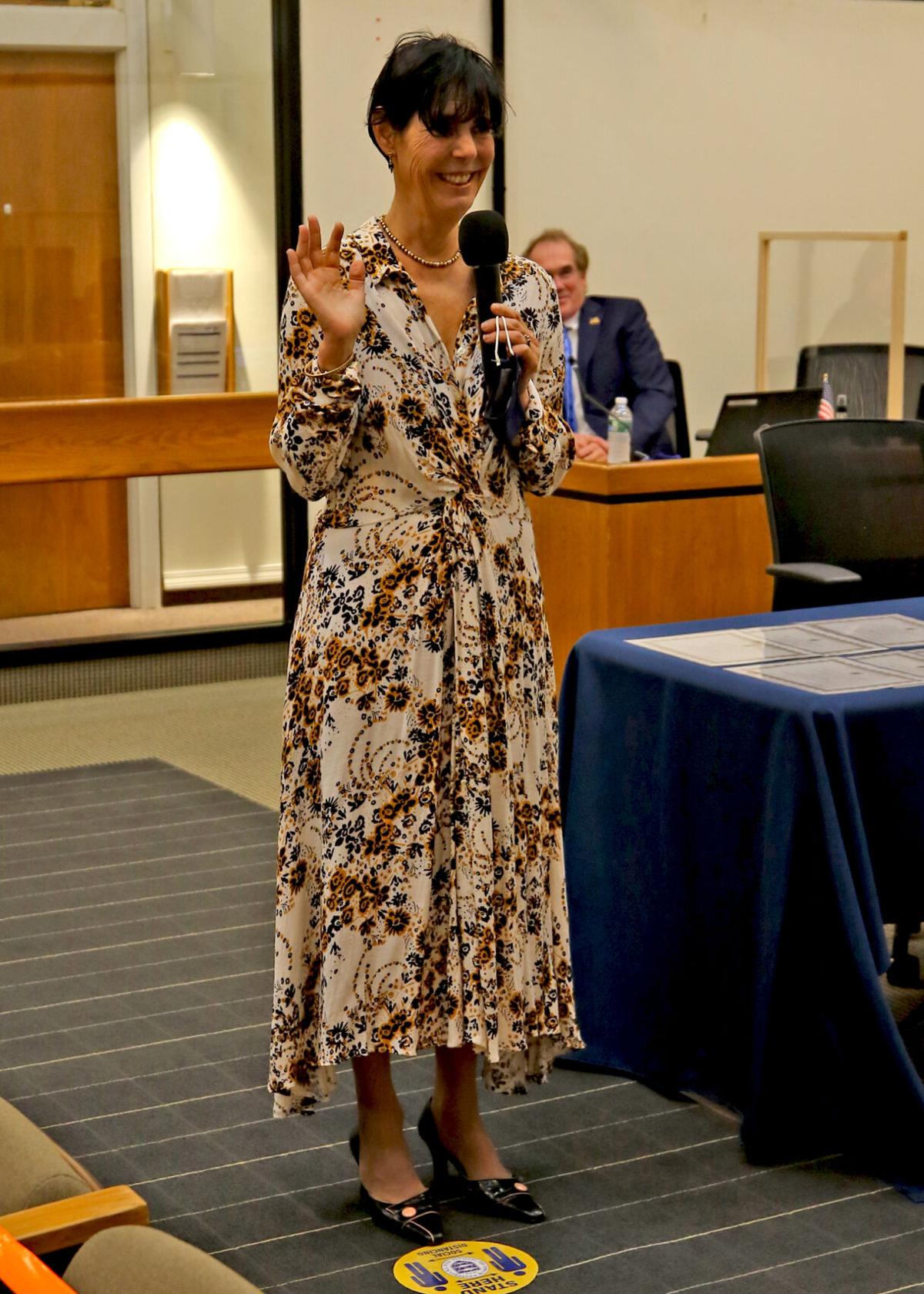 WESTERLY — For each of the past two local elections, voters have voiced their support for Sharon Ahern by making her the top vote-getter for Westerly Town Council. That support was validated Monday as Ahern was named the council's next president.

Members of the council voted unanimously during the inaugural meeting of the 2020-22 council to support Ahern, who ran as an incumbent unaffiliated candidate on her way to earning the most votes for the second consecutive term. She will take the reins from Christopher Duhamel, who was the third-highest vote-getter and will continue to serve on the council during the coming term.

"I just want to thank everyone and let you know I appreciate the vote of confidence; it means a lot to me," Ahern said after receiving the gavel. "I truly believe this will be a great team. I am very optimistic about it but also anxious because we have a lot of work ahead of us."

The decision will return the gavel to the town's top vote-getter two years after members chose not to reward Ahern's victory. Then a newcomer to the council, members expressed concerns about her experience before voting Duhamel as president.

After receiving 6,745 votes in 2020, according to data available through the Rhode Island Board of Elections website, council members chose to support the will of the people in naming her president for the coming term. The top vote-getter has served commonly as president at times in the past, but there is no requirement that the president's gavel be given to the top vote-getter.

Caswell Cooke Jr., also unaffiliated, received the second-highest number of votes in 2020 with 6,727, while Duhamel, a Democrat, finished third with 6,411 votes.

Ahern said in an interview with The Sun earlier this month that she expects the new council to get to work right away on the Comprehensive Plan and proposed revisions to the zoning regulations once the Planning Board completes its work. The council will also soon conduct its annual joint meeting with the School Committee to start the budget process, she said.

Council members also chose, by a 4-3 vote, to appoint Suzanne Giorno to serve a second term as the vice president. The motion was approved by Giorno, Duhamel, Karen Cioffi and Brian McCuin. Ahern, Cooke, and Philip Overton each voted for Cooke, with Ahern stating that she selected Cooke for consistency as the second-highest vote-getter.

The inaugural meeting did not have the same pomp and circumstance as previous years, with the town choosing to forgo the traditional escort by the Westerly Police Honor Guard and limiting those present for the post-election ceremony to just 10 people.

Members of the 2020-22 council were sworn in one-by-one in the Council Chambers at Westerly Town Hall by Lt. Gov. Daniel McKee, while the newly elected members of the School Committee took their oaths of office online. Duhamel told the public that the scaled-back celebration was designed to adhere to state Department of Health recommendations regarding safety given the coronavirus pandemic.

Duhamel also used Monday's meeting as an opportunity to thank outgoing members of the School Committee, those appointed to serve in roles during the previous council's term. The individuals recognized were not present, and will receive their certificate of appreciation at a future date or by mail, officials said.

He also offered a word of thanks to outgoing councilor William Aiello, who attended his final meeting as a councilor via Zoom. While he acknowledged the two didn't always see eye to eye on every issue, Duhamel said Aiello was a man who was always "true to his word," and thanked him for representing Westerly while always keeping the best interests of the community at heart.

"You have been a hard worker for Westerly, in all aspects from recreation to serving on the Public Works Committee to helping build the community center," Duhamel told Aiello, who stated only that it had been an honor serving.

The meeting also gave Duhamel a moment to recount the challenges of the 2018-20 council, which included the death of town employee Angelo Turano in late 2018 following a tragic incident at the town's transfer station, a shooting at Babcock Village in 2019 that led to the death of a resident and two employees, and the COVID-19 pandemic in 2020.

"We have developed a strong level of camaraderie over the past few years, working together in some very difficult times during the past term," he said.

During Monday's meeting, members of the council also approved the appointment of Democrat Michael Ober to serve on the Westerly School Committee, taking over a position left vacant when Mary Adams announced just prior to the election that she would be resigning from her role.

Ober, who works as an eligibility services specialist for the Connecticut Department of Social Services, previously served on the committee for a total of seven years. He has also served on the Board of Finance and on the Municipal Land Trust.

Council members were split on the selection, with Ahern, Cooke and Overton each lending their support to nominee Tim Killam, an independent. Both Killam and Ober were unable to secure enough votes to be elected in November, but Killam had attained support from 43 more voters than Ober.

In the Easy Chair with Angeline Lanzetta-Gualtieri

In My Own Shoes: Who’s ‘they’? And why are they ‘influencers’?

Postscripts: Susan Sayer’s spirit is inspiring as she copes yet again with her fate