Designs for Mystic River Boathouse Park show plans for the boathouse, which will look like a barn. The concept was approved by the state on Dec. 1. A contemporary design drew an outcry on social media. Courtesy Mike O'Neill 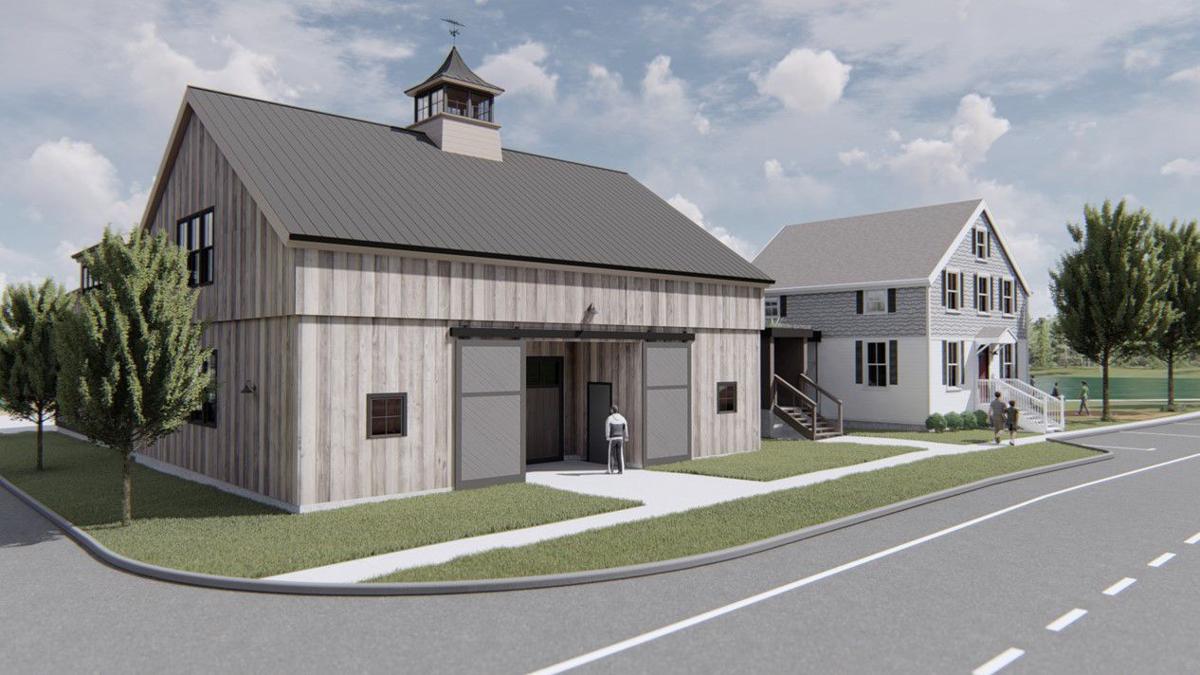 Designs for Mystic River Boathouse Park show plans for the boathouse, which will look like a barn. The concept was approved by the state on Dec. 1. A contemporary design drew an outcry on social media. Courtesy Mike O'Neill

STONINGTON — A crowd of more than 70 people expressed near unanimous approval of the new designs for the Mystic River Boathouse Park last weekend. With an estimated $2.8 million needed for remediation of the site, however, the focus now turns to procuring the grant funding necessary to make the project a reality.

First Selectwoman Danielle Chesebrough and Mike O'Neill, director of rowing for the Friends of Stonington Crew and vice chairman of the Mystic River Boathouse Park Implementation Committee, said that about $3.2 million will be needed to complete the project as approved by the state.

"There has been some confusion in the past week regarding the costs that will be needed to complete this project," Chesebrough said. "There will be no added money coming from the town. We will be applying for a brownfield grant from the state at $2.8 million, but that money would include funding that will help build a majority of the park itself."

Voters approved $2.2 million in bonding for the park on Greenmanville Avenue in 2016. The town bought the property for $1.67 million in January 2017, and the town currently has about $440,000 remaining from the bond, which will be used for items such as lighting and benches. The remaining cost, $2.8 million, would be sought through the state and would allow for construction of the park itself at the same time, Chesebrough explained.

By the time all is said and done, the project is expected to cost approximately $5 million in public funds between bonding and state grants. The town had already received a separate $200,000 grant through the state Department of Economic and Community Development, which was used to hire Kent + Frost of Mystic, the landscape architecture and design firm chosen to design the park.

Plans for a boathouse on the site, which would be used primarily for the Stonington High School crew team and a community rowing program, are also progressing, but will be funded entirely through private fundraising through Friends of Stonington Crew, O'Neill said. As of right now, he said, about $400,000 has been raised.

The new design for the boathouse was formally presented to the public during an information session at Stonington High School on Dec. 7. The building would be about three times larger than an old home, designated as historic, that will be preserved and moved to a site 90 feet north of its existing location and placed in front of the boathouse.

"The public expressed concerns after we unveiled the initial design, and with the state requiring that a historic home on the property be restored, we used the opportunity to redesign the boathouse at the same time," O'Neill said.

Of the approximately 70 people in attendance, O'Neill said the support for the new concept was "unanimous."

The boathouse will contain boat bays, equipment storage and a training area. Its exterior will primarily be weathered wood to resemble other structures along the shoreline, O'Neill said.

Chad Frost, principal of Kent + Frost, said the two buildings will be connected by a glass hallway that will serve as the Hart Perry Trophy Room, named after the National Rowing Foundation executive director, who died in 2011. The house will be restored and turned into changing rooms, offices and restrooms.

There will also be an amphitheater on the site to provide outdoor seating.

Frost said Thursday that the adjusted master plan was completed in October and presented to the state. The State Historic Preservation Office, which operates under the economic development department, formally approved the plans on Dec. 1.

Under the revised plan, Frost said the relocated home — the last one in a neighborhood that predated the Mystic Seaport Museum — would serve as the park's centerpiece, being the first building visible to southbound motorists on Route 27.

Frost said the plan was redesigned following ongoing negotiations with historic preservation office. The result provided an aesthetically pleasing look that also incorporated what the public had asked for, he said.

"It took more time than expected to get through that phase, but that wasn't the town's fault," Frost said. "This master plan is what the public wanted," he said, adding that the implementation committee "has committed to seeking all avenues of funding possible to make it happen."

With a master plan in place, the focus will be on remediation and site work, which is expected to be expensive, because the 1.2 acre site contains coal slag dumped by the Rossie Velvet Mill. During the last rounds of state bonding, which occurred over a year ago, the state's Bond Commission distributed just $4 million and only one municipality received more than $1 million. It is uncertain what might be approved in the next round and when funding may be released. The project, if approved through the brownfield grant process, would be competing with other projects for state funding.

Chesebrough, O'Neill and Frost said that while there are a number of moving parts, they were confident that the state would release some money to the town, whether it be the full $2.8 million or a partial grant.

"There is a recent history of the state approving funding boathouses and recent grants of approximately $2 million were used for projects in Middletown and Glastonbury, and a much larger project was approved in New Haven" Chesebrough said. "These projects, along with the community aspects of what we are trying to do here in Mystic, make the town a good candidate."

The $200,000 approved by the state for the design phase is also an indication that the town is in good standing, Chesebrough said. Conversations with DECD officials, as well as with state Sen. Heather Somers, R-Groton, Rep. Kate Rotella, D-Stonington, showed a strong level of support as well.

If the funding were to fall through for any reason, or if the grant is less than requested, Chesebrough and O'Neill said the town would explore a variety of federal grant opportunities. One such grant, approved by Congress this week, was a living shoreline grant that could provide up to $500,000. Such funds could be used for remediation of the living shoreline portion of the park.

In any event, Chesebrough said she is more confident now that the town will be able to eventually move forward without seeking additional municipal funding.

In the meantime, Frost said the town will proceed with the work of securing 21 necessary permits at the local, state, and federal levels. Obtaining those permits will take about a year, he said.

O'Neill and Chesebrough said they were excited about the opportunities the project could provide, including the possibility of a wide variety of general recreation programs.

The work will take time, O'Neill said, but in the end he believes the project will be something the entire community will be proud of.

"As with any worthwhile project it won't be without its challenges. If there weren't any, then it wouldn't be a project worth doing," he said.