You are the owner of this article.
Edit Article Add New Article
You have permission to edit this article.
Edit
Welcome, Guest
Home
News
Sports
Obits
Opinion
Photos
Classifieds
Things to Do
Special Sections
More
1 of 12 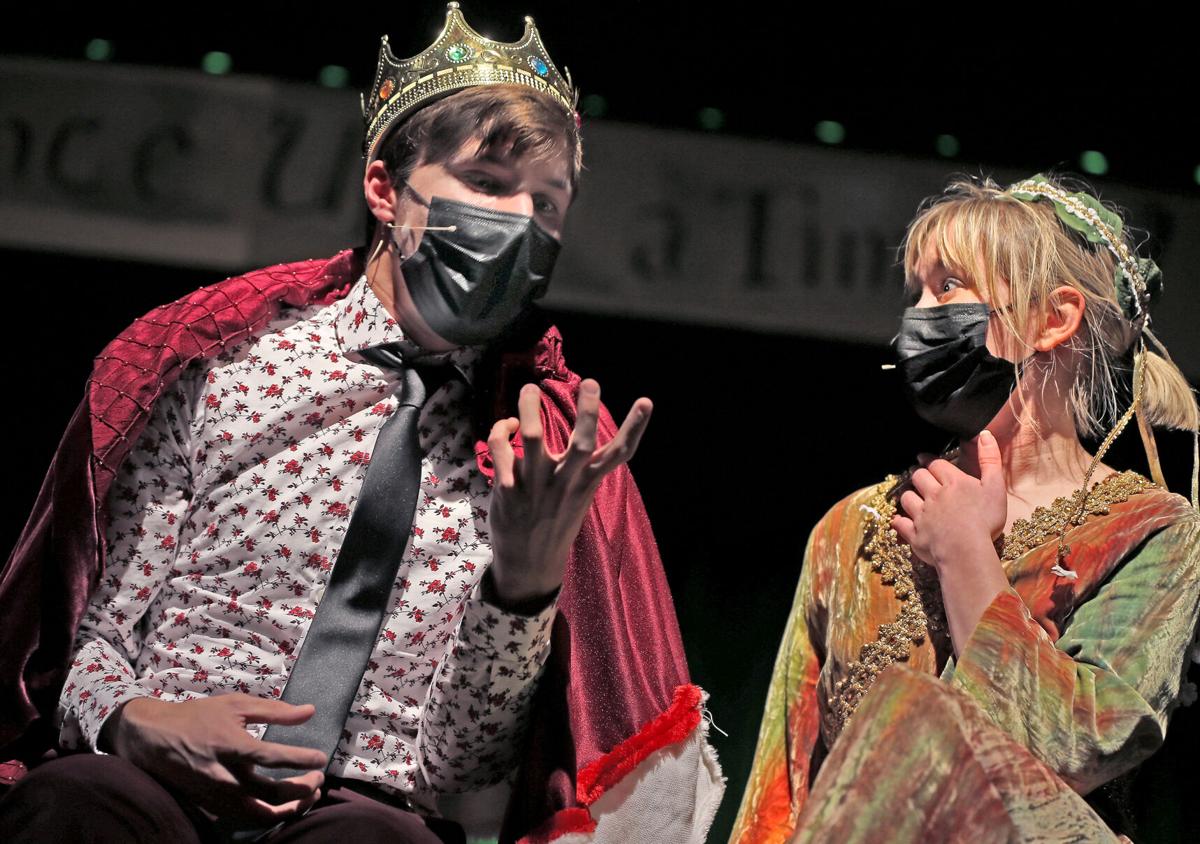 Stonington High School Theater group cast member rehearse their roles as ,in their production of “Brothers Grimm Spectaculathon”, on Wednesday, Nov. 17, 2021, in the school’s auditorium. The play is directed by Erin Sousa-Stanley. | Tim Martin,The Westerly Sun 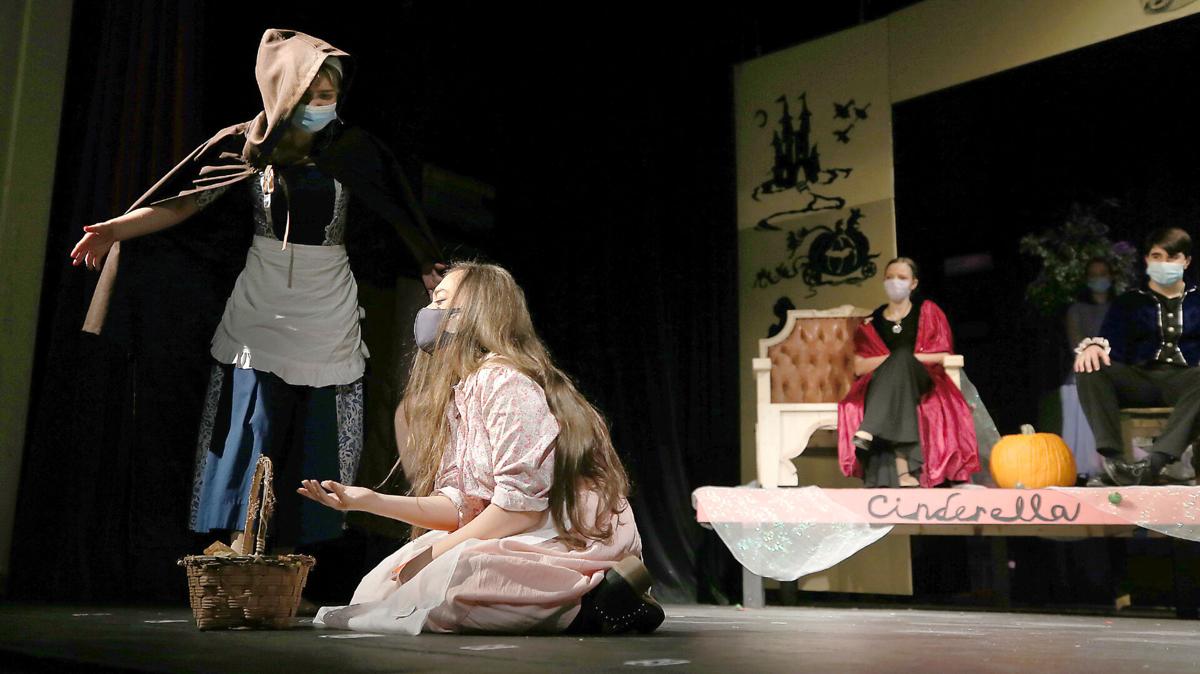 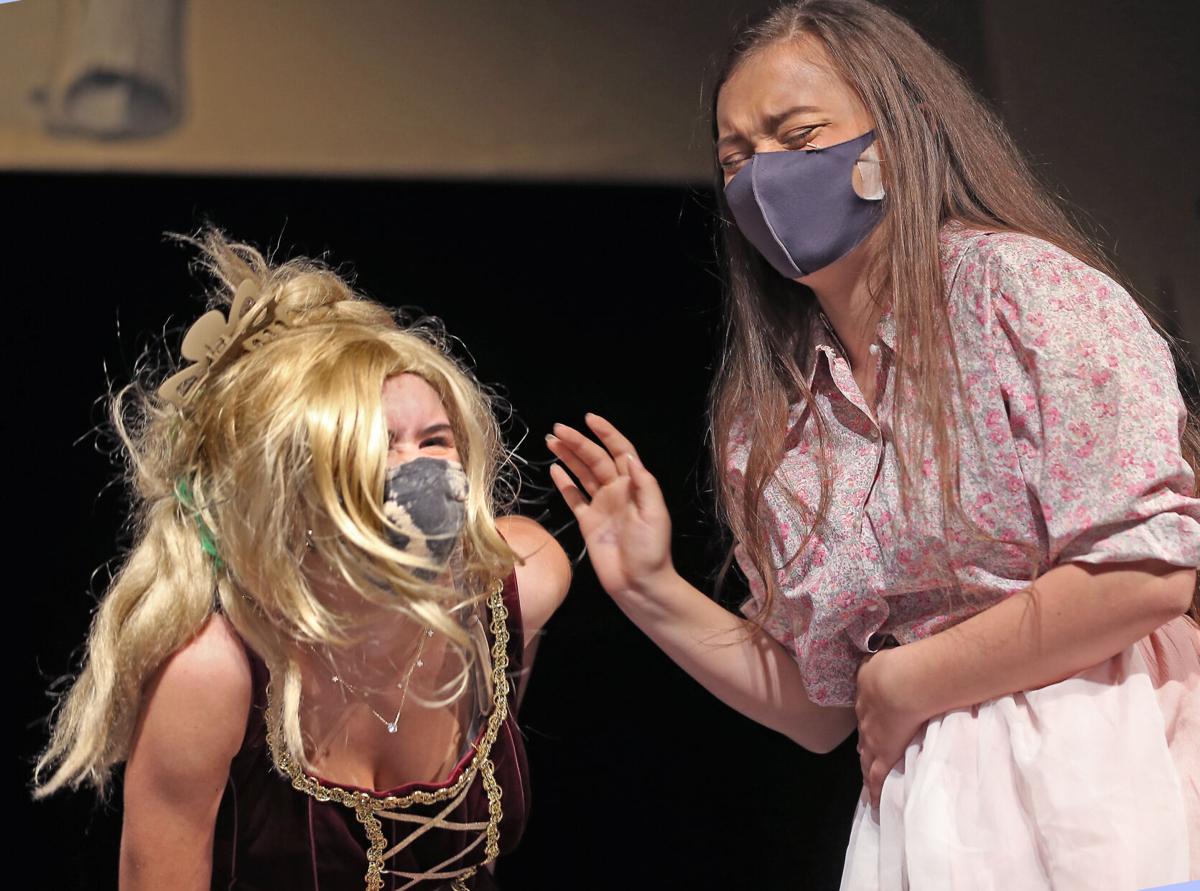 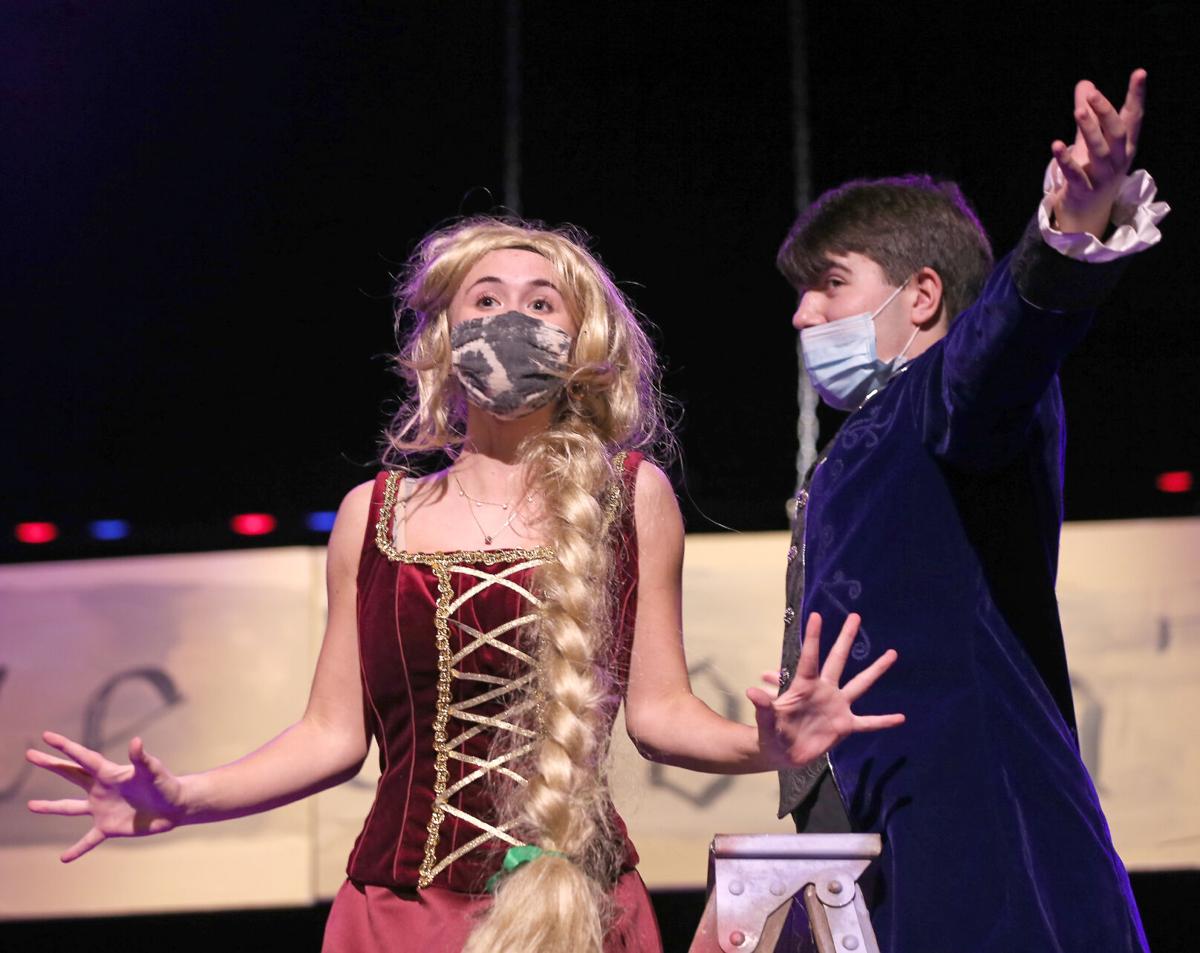 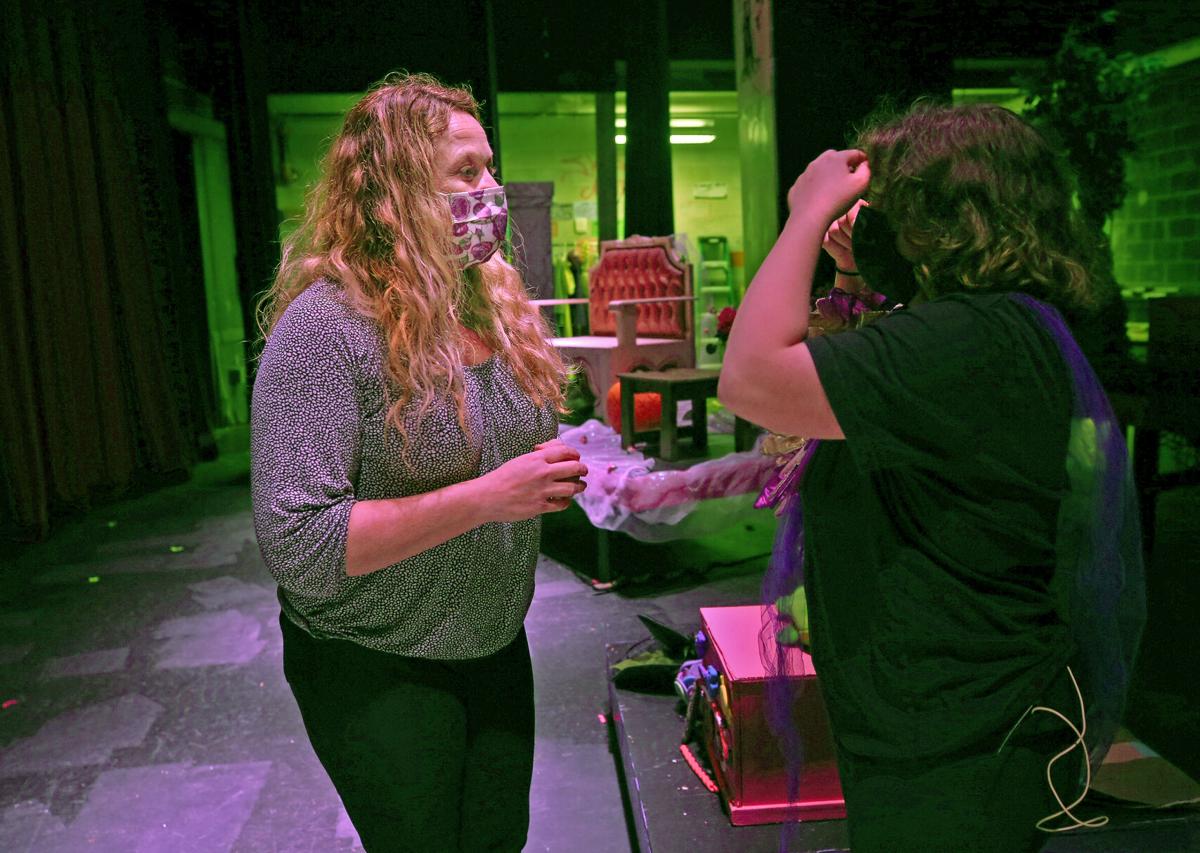 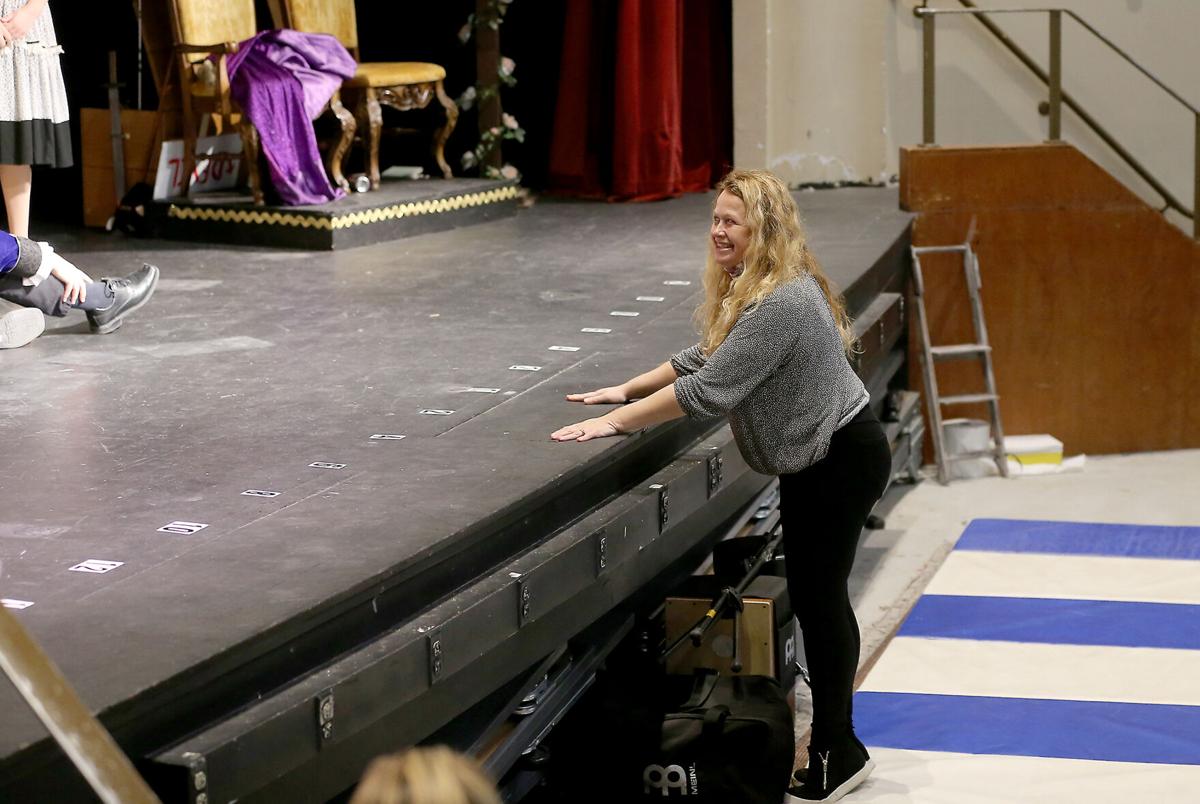 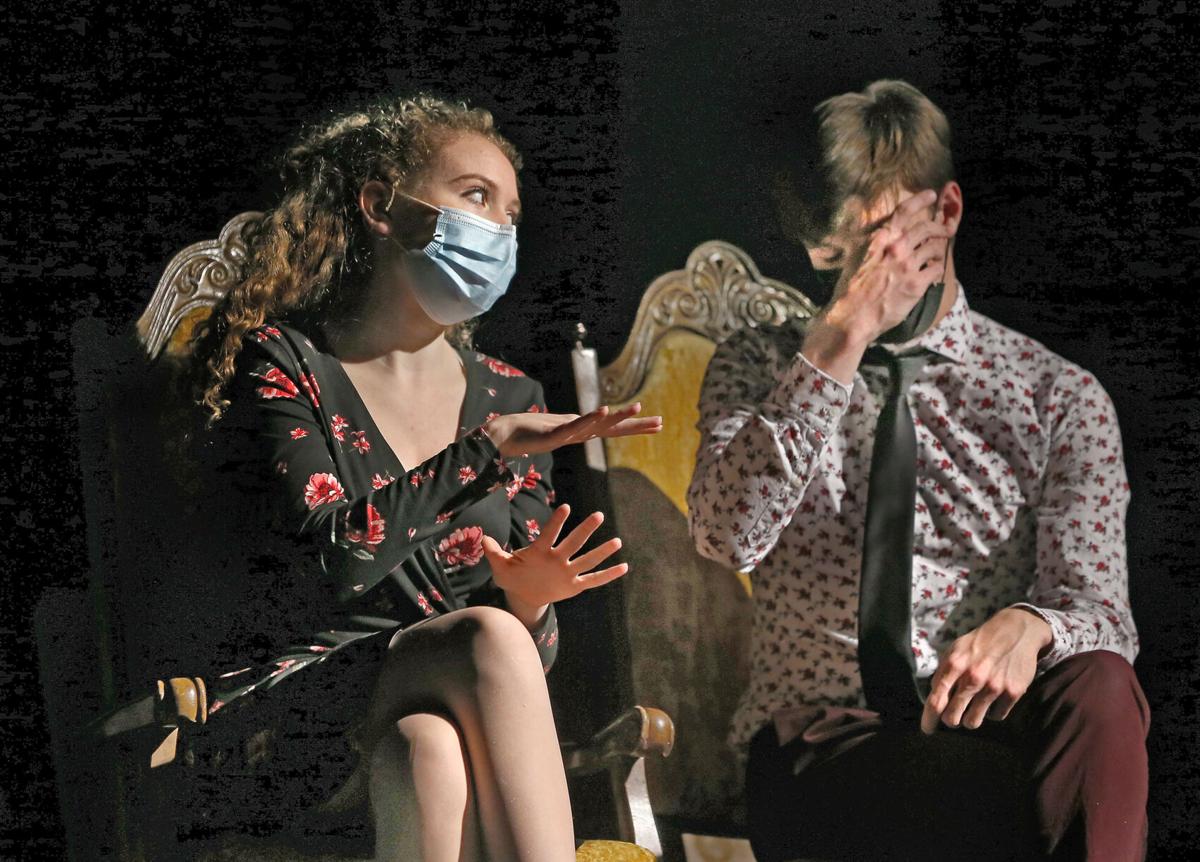 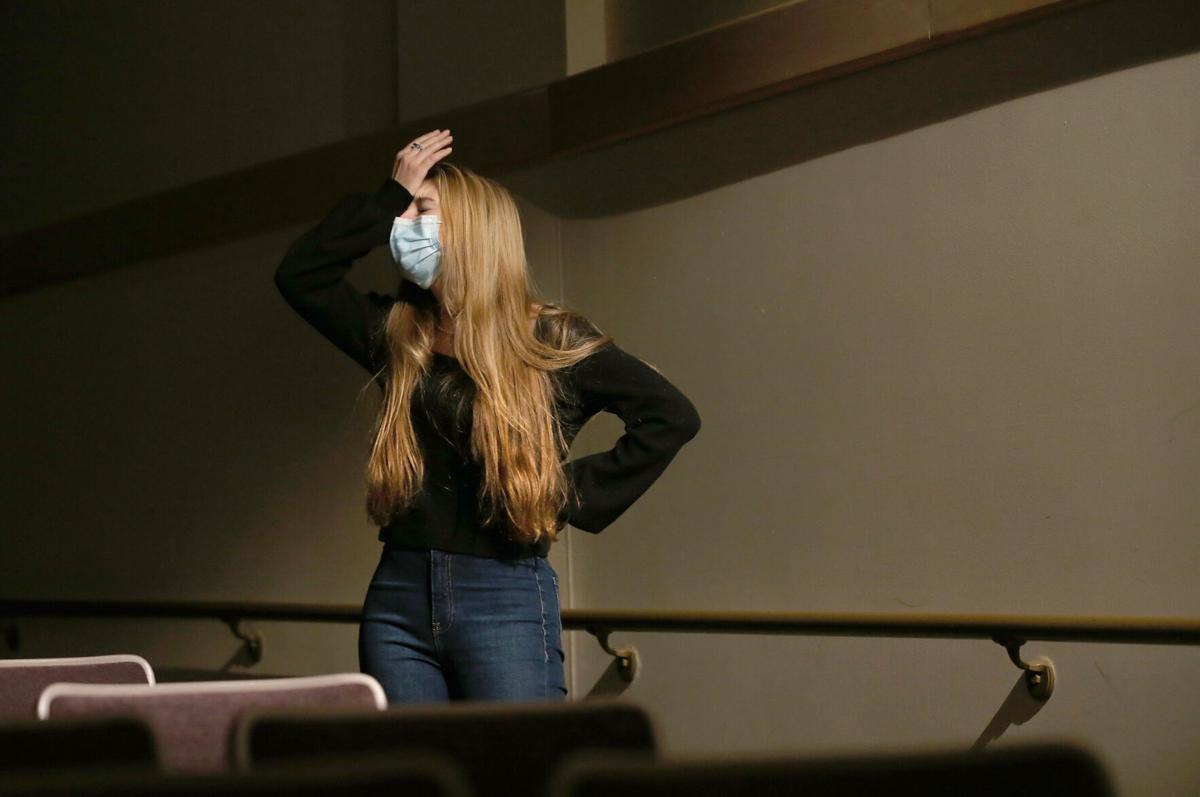 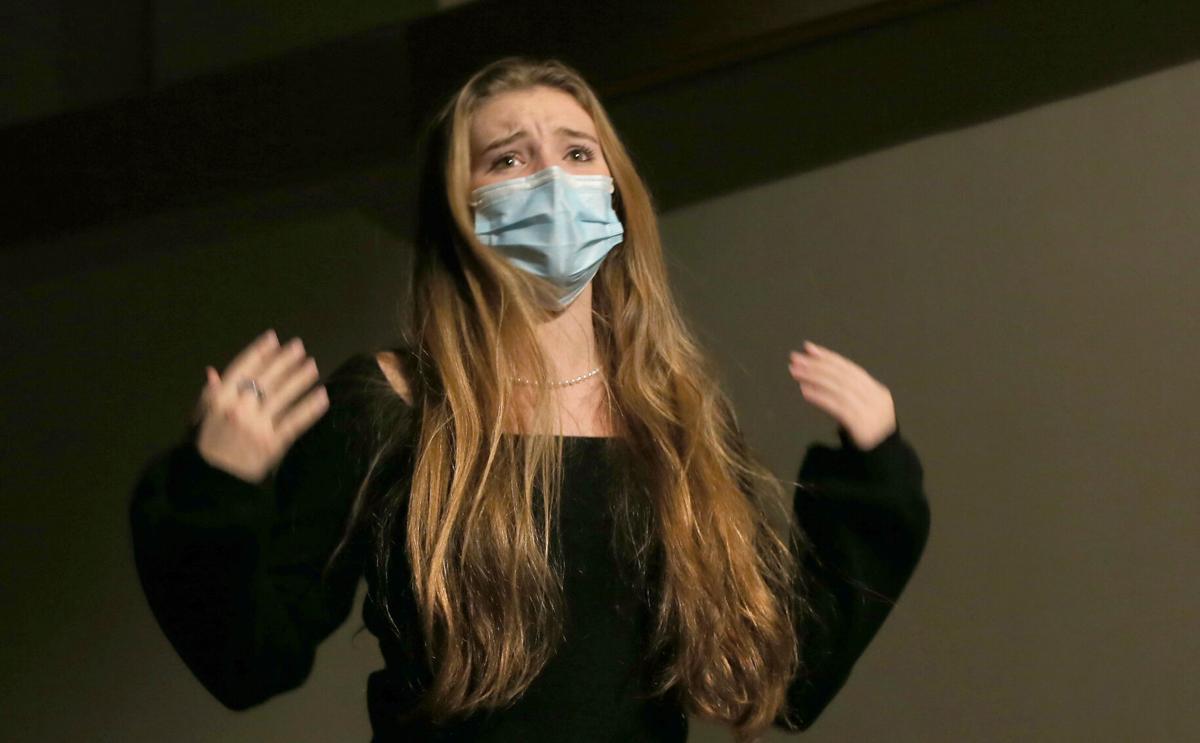 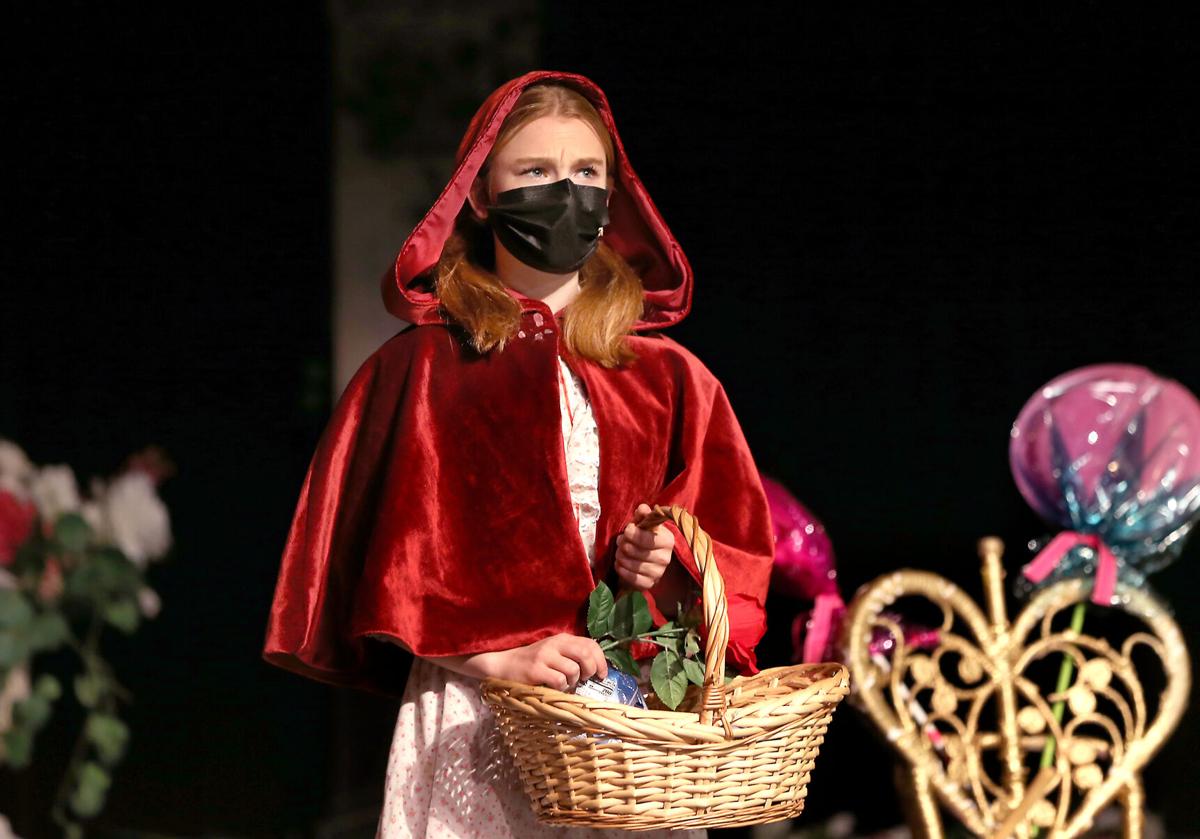 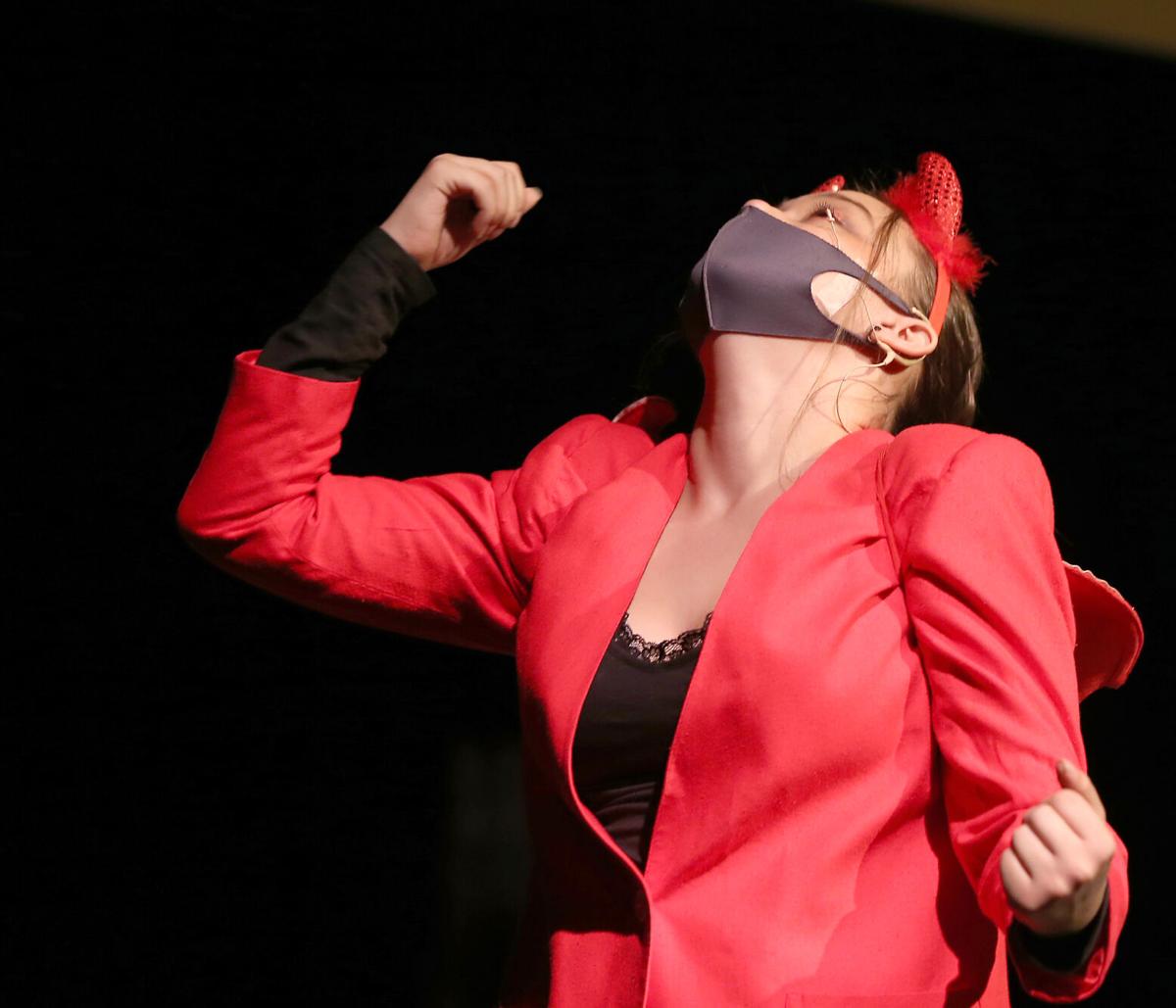 Stonington High School Theater group cast member rehearses her role as ,in their production of “Brothers Grimm Spectaculathon”, on Wednesday, Nov. 17, 2021, in the school’s auditorium. The play is directed by Erin Sousa-Stanley. | Tim Martin,The Westerly Sun 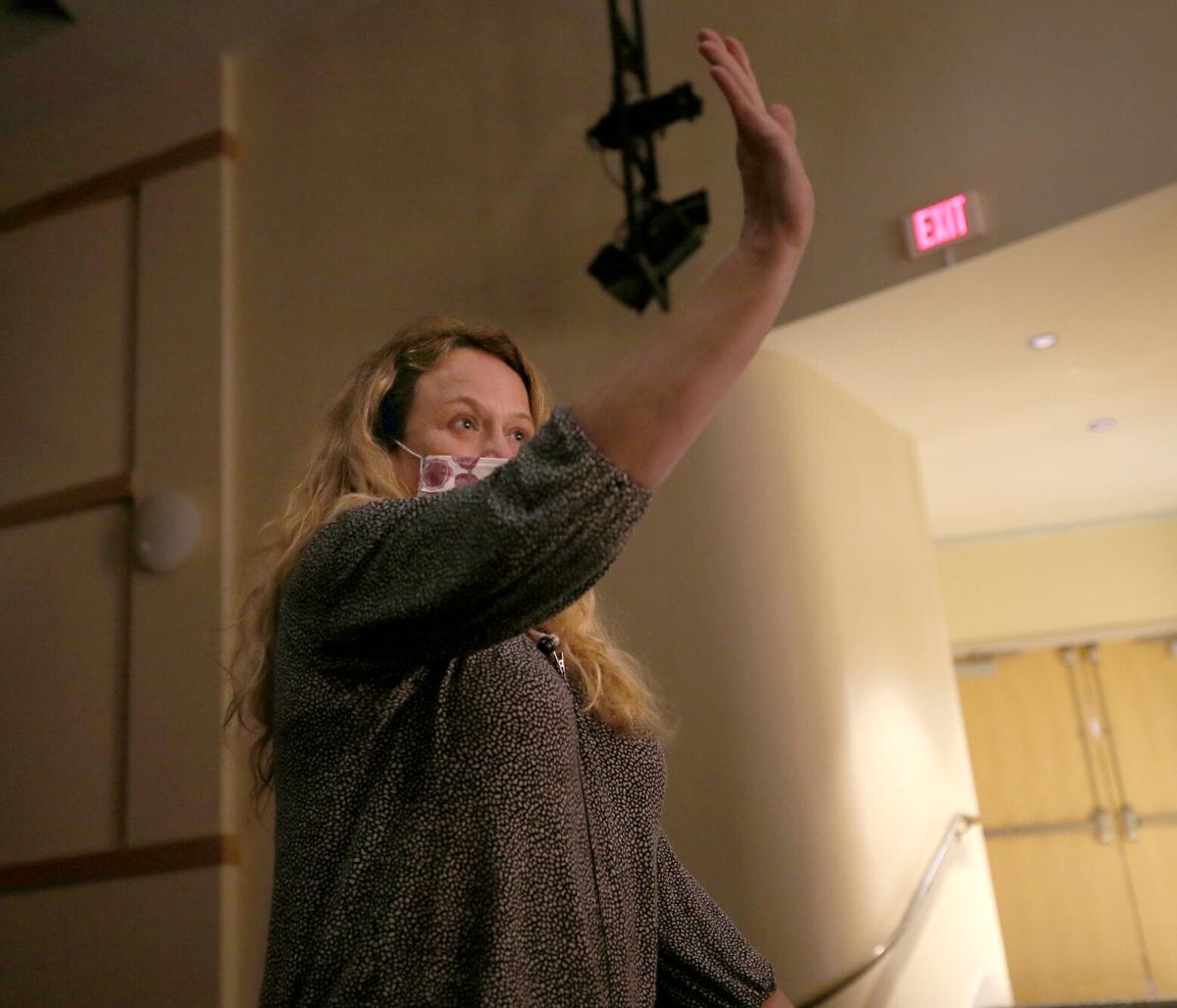 Stonington High School Theater group cast member rehearse their roles as ,in their production of “Brothers Grimm Spectaculathon”, on Wednesday, Nov. 17, 2021, in the school’s auditorium. The play is directed by Erin Sousa-Stanley. | Tim Martin,The Westerly Sun

Stonington High School Theater group cast member rehearses her role as ,in their production of “Brothers Grimm Spectaculathon”, on Wednesday, Nov. 17, 2021, in the school’s auditorium. The play is directed by Erin Sousa-Stanley. | Tim Martin,The Westerly Sun

STONINGTON — Maggie Welch, a 17-year-old Stonington High School senior, stood in the spotlight Wednesday afternoon, smack dab in the middle of the auditorium stage. Within moments, Kyler Christina, who is also a senior and also 17, scrambled up the steps to join her.

The two teenagers proceeded to banter and joke when suddenly the curtain rose to reveal an enormous sign — hung from the ceiling high — which read "Once Upon a Time." Beneath the sign, arranged artfully all around the stage, were an assortment of mini sets, each with characters in costume, and each with the name of a fairy tale painted on the front.

It was a dress rehearsal for "The Brothers Grimm Spectaculathon," the fall production of the Stonington High School Drama Program, and the students were eager and ready for the run-through.

The play, based on the collection of Grimm Brothers fairy tales and written by educator Don Zolidis, has been one of the most frequently produced plays in high school theater, and has been described as "a wild, free-form comedy with lots of audience participation and madcap fun."

"We wanted to do something joyful and fun and one with a lot of people," said Director Erin Stanley, a veteran choreographer and stage director who has been teaching for more than 20 years. "Especially because of the pandemic ... and now that theater is finally back."

"We have more than forty kids involved," she added. "Some are onstage, some are doing the lighting and sound and others are part of the stage crew."

"It's a little outside our comfort zone but it's given us a lot of opportunities," said Stanley, noting that several students get to play more than one role. "It's a zany play."

Welch and Christina, who play the roles of the two narrators, said it is exactly that zaniness that makes the play so much fun and so unpredictable.

"We get to use our comedic skills," joked Welch, who has been a member of the theater group throughout her high school years, "and put things together in unexpected ways."

"I like it because we get to do improv," added Christina, who along with Welch earned a Halo High School Theatre Awards for "Best Costume Design and/or Execution" for last year's play, "Still Life with Iris." "I've never done improv, so it's a great learning opportunity."

"It's like we're just playing," he continued, "Like kids playing ... and we get to be creative and jump in and out of character."

"I also like it also because we all think we know all about the fairy tales," said Welch, "but these are different."

Welch said that the script, written originally in 2007, has been updated to include contemporary references.

"There are COVID references," she said, "and even something about Britney Spears."

Described as an "epic, action-packed, fast-paced retelling of some of your favorites such as 'Snow White,' 'Hansel and Gretel,' 'Rumplestiltskin' and some you’ve never heard of, like 'The Fisher Girl,' and 'The Devil’s Grandmother,'" the play's two narrators and their "crack team of actors" attempt to combine the complete 209-story works of the Grimm Brothers into one gigantic "Spectaculathon," Stanley said.

"It keeps us on our toes," added Christina. "You don't know what's coming next."

Senior Sydney Champagne, 17, who has been acting since she was in fifth grade, has several roles in "The Brothers Grimm Spectaculathon," but prefers one above the others.

"My favorite is probably the witch," she said with a smile. "It's kind of fun playing an evil character."

"But she's really very sweet," put in sophomore Katie Danaher, who was walking by and overheard Champagne. "I promise."

Danaher, a vocalist who is the lead singer of the local rock group, "Pop!," is participating in a theatrical production at the high school for the first time with "The Brothers Grimm Spectaculathon."

"It's really fun," said Danaher. "It's a really great environment."

"We break the fourth wall," said Stanley with a laugh. "We actually talk to the audience."

"The Brothers Grimm Spectaculathon" opens tonight with performances tonight and Saturday at 8 p.m. and Sunday at 2 p.m. Tickets are $12 for students and $15 for adults and are available at the door.

Both sides ramping up for new state-by-state abortion fight

Connecticut reports its first omicron variant case; may be tied to NYC man