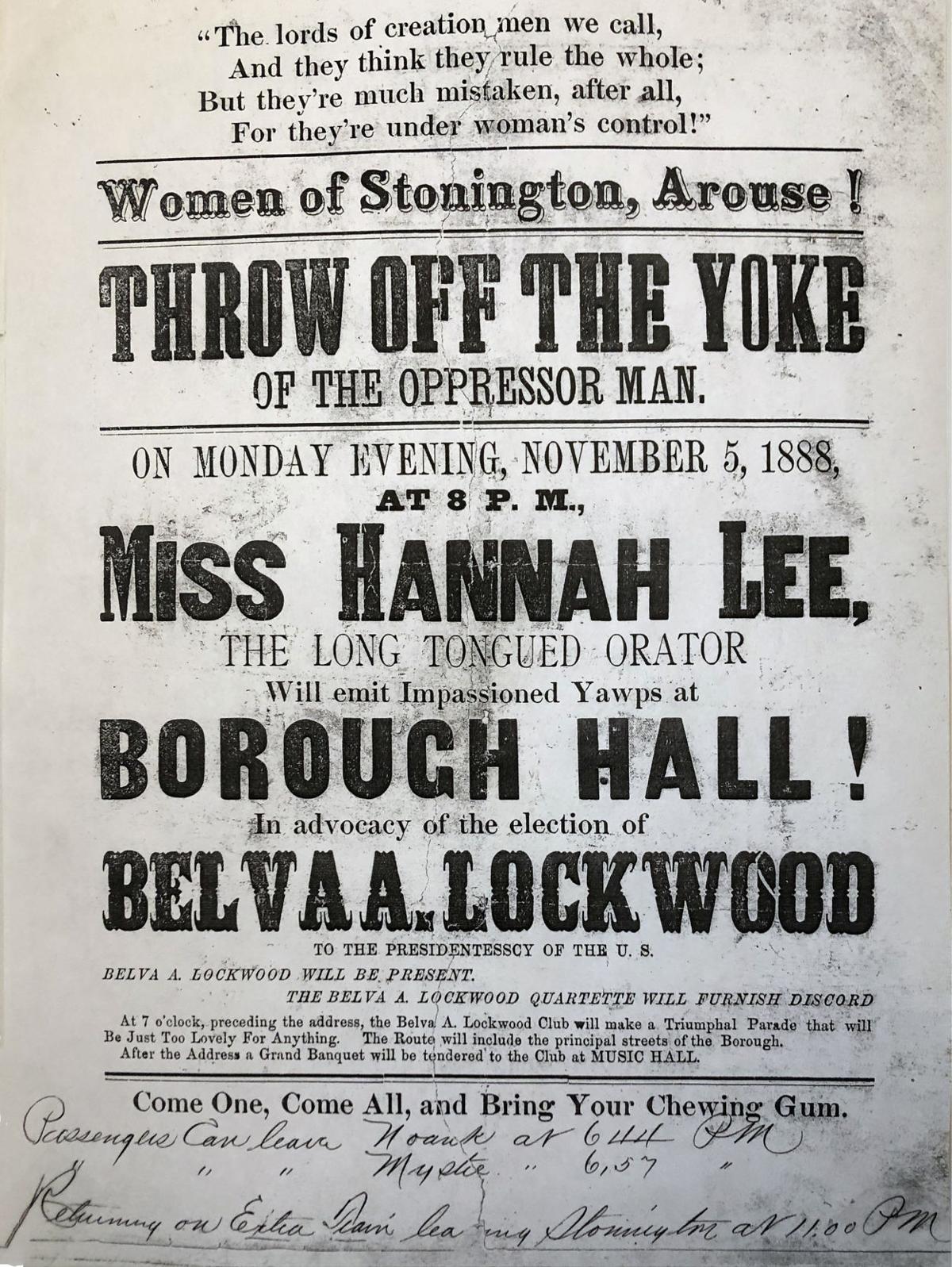 The cheeky poster "advertising" the appearance of Belva Lockwood in Stonington in November 1888. (Courtesy of Indian and Colonial Research Center) 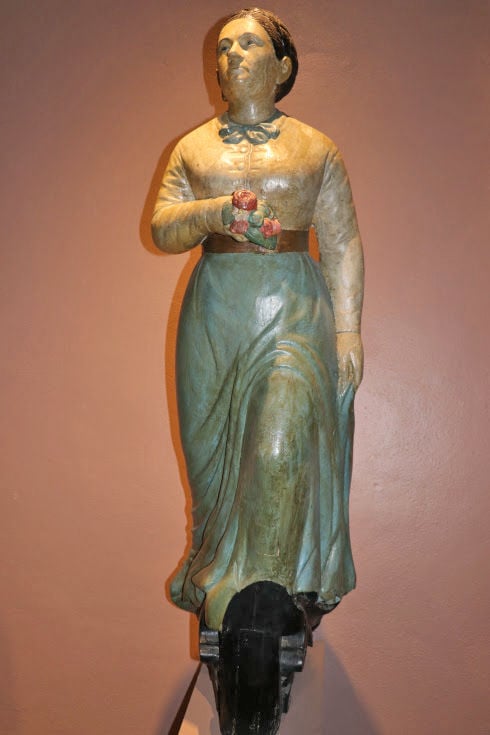 A ship's figurehead that is purported to be Belva Lockwood at the Mystic Seaport Museum. (Courtesy of New England Nomad blog)

The cheeky poster "advertising" the appearance of Belva Lockwood in Stonington in November 1888. (Courtesy of Indian and Colonial Research Center)

A ship's figurehead that is purported to be Belva Lockwood at the Mystic Seaport Museum. (Courtesy of New England Nomad blog)

On a soggy Thursday morning the other week I stopped in at the snug Indian and Colonial Research Center in Old Mystic, looking for a certain book. Once settled, and though I did not have to use the facilities, Marcus Mason Maronn, a stalwart and congenial volunteer at the center, urged me to visit the bathroom.

Posted in that bathroom was one of the most ardently awkward, perhaps because of the vernacular of the day, or just blatantly satirical, public notices I’ve read. It promoted the appearance of Belva A. Lockwood, leading suffragist, prominent Washington, D.C., lawyer, the first female attorney allowed to practice before the U.S. Supreme Court and twice candidate for president of the United States, at Borough Hall in Stonington Borough. She was to appear at 8 p.m. on Monday, Nov. 5, 1888, the evening before the national elections.

Judge for yourself the tenor of the handbill:

The lords of creation men we call,

And they think they rule the whole;

But they’re much mistaken, after all,

For they’re under women’s control.

That was the ditty that headed up the notice, followed below, in bold lettering:

THROW OFF THE YOKE

OF THE OPPRESSOR MAN.

Will emit Impassioned Yawps at

In the advocacy of the election of

To the presidentessy (sic) of the U.S.”

Belva Lockwood would be present and “The Belva A. Lockwood Quartette will furnish discord.”

Added, in fine script, was: “At 7 o’clock, preceding the address, the Belva A. Lockwood Club will make a Triumphal Parade (through the borough) that will Be Just Too Lovely For Anything.”

Finally, the notice urged: “Come One, Come All and Bring Your Chewing Gum.”

At the bottom of the handbill were penned train times from Noank and Mystic to the event and the 11 p.m. return.

This handbill, as suggested earlier, might be innocent, given the colloquial manner of the era. But “Long Tongued” and “ Impassioned Yawps” and “bring your chewing gum” and “just too lovely for anything”? Sorry.

In this, the year celebrating the centennial of Women’s Suffrage, it is prudent, at the least, to spotlight the history of abuse, ridicule and obstacles confronting generations of women seeking the right to vote, and the treatment of Belva Lockwood is a microcosm.

For the record, I asked Marcus Mason Maronn why the vintage handbill was displayed in the bathroom, of all suggestive places? He said the late 19th-century presidential campaigns of Belva Lockwood did not fit in with the scope of the pre-colonial and colonial research center, but he wanted to make sure patrons saw it.

Lockwood, nominated for the presidency in 1884 and 1888 by the National Equal Rights Party, and deemed the first woman eligible by age to run for president, was no stranger to disparagement, and the underlying sneer that I read in that poster was merely an extension of what occurred here four years earlier.

In October of 1884, according to “Women’s Suffrage and Memorabilia: An Illustrated Historical Study,” written by Kenneth Florey and published in 2013 by McFarland & Co. in North Carolina, Mystic was the setting for a “Mother Hubbard Parade,” one of a series of marches by men throughout the country aimed at buffooning Belva Lockwood.

“Men attired in dresses carried torches and toted rag babies while marching to Williams and Dudley’s Square, where a hand-drawn banner bearing a ‘portrait’ of the candidate was raised on which the words ‘For President Belva Lockwood’ were inscribed,” wrote Florey.

“There was a speech given by ‘Anna Dickinson,’ a caricature of the labor and suffrage activist Oliver Hewitt, an obscure figure today who may have been the editor of an area newspaper.

“A poem was read and later distributed to the crowd by an anonymous ‘Sweet Singer of Lyme.’”

As the late local historian Carol Kimball of Mystic has written about the 1888 event in Stonington:

“Belva Lockwood clubs were organized too, but they worked against the candidate, staging ‘Belva Lockwood parades’ in which men dressed as women. They marched wearing poke bonnets and carrying brooms for sweeping out corruption. In quiet Stonington, such an event was arranged on Monday evening, Nov. 5, 1888, the night before election. Prominent men of the village, Palmers, Cheseboros, Weeks and Wheelers, donned women’s clothing and paraded to Borough Hall.”

There is a curious addendum to the Belva Lockwood story here. Mystic Seaport Museum has in its collection a figurehead known as “woman with roses” and said by some to be a striking likeness of Belva Lockwood. The Seaport description notes: “Figurehead from unidentified vessel … once thought to be from vessel named BELVA LOCKWOOD, full-length woman, black hat, blue skirt, white blouse.”

Fitness coaches adapt to lockdown with online classes and workouts

Postscripts: The Medal of Honor-winner who once roamed the halls at Stonington High School

In My Own Shoes: He helped put the ‘greatest’ in that generation