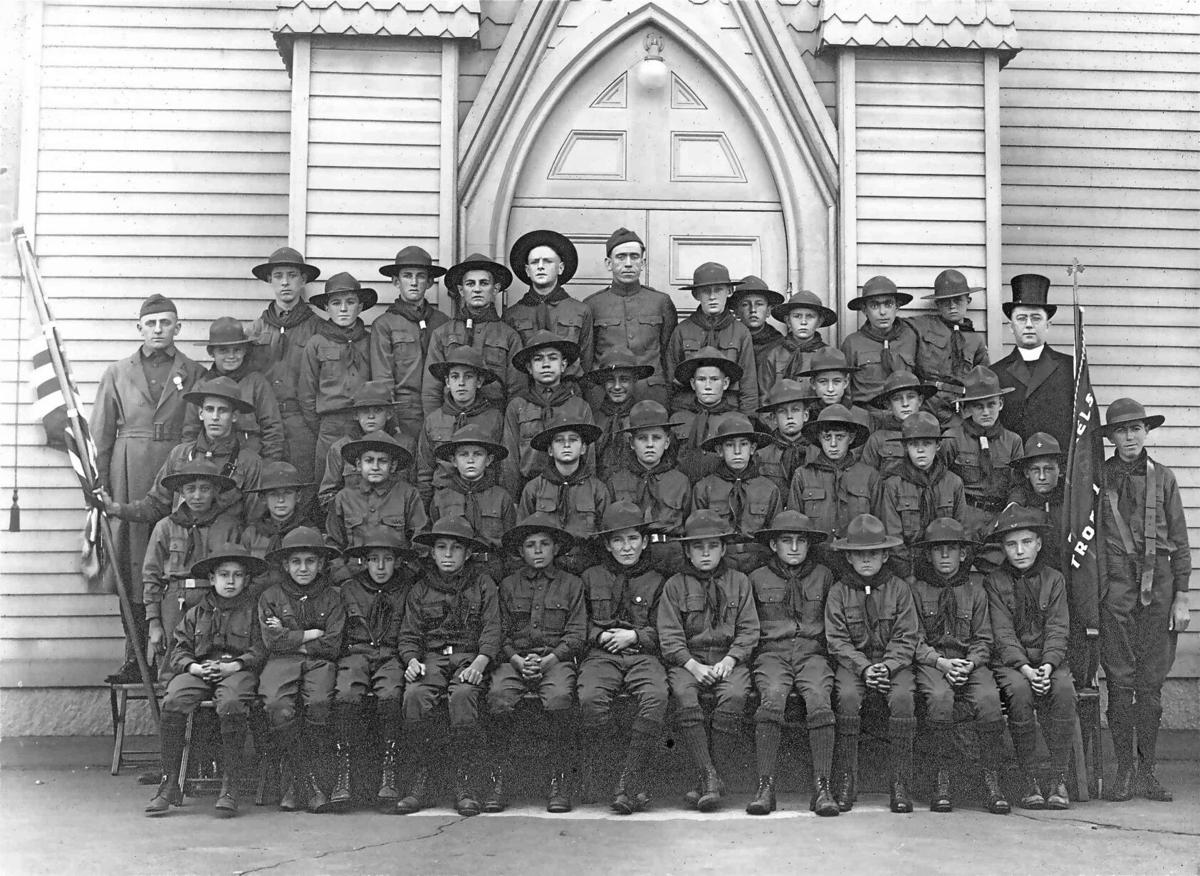 The original Troop 9 poses in front of St. Michael the Archangel church in July 1920, with the Rev. John Keane in top hat, before marching down Liberty Street to “crash” the Westerly Fourth of July Parade. The troop had been rejected in its application to join the parade because of anti-Catholic bias. Courtesy of Troop 9 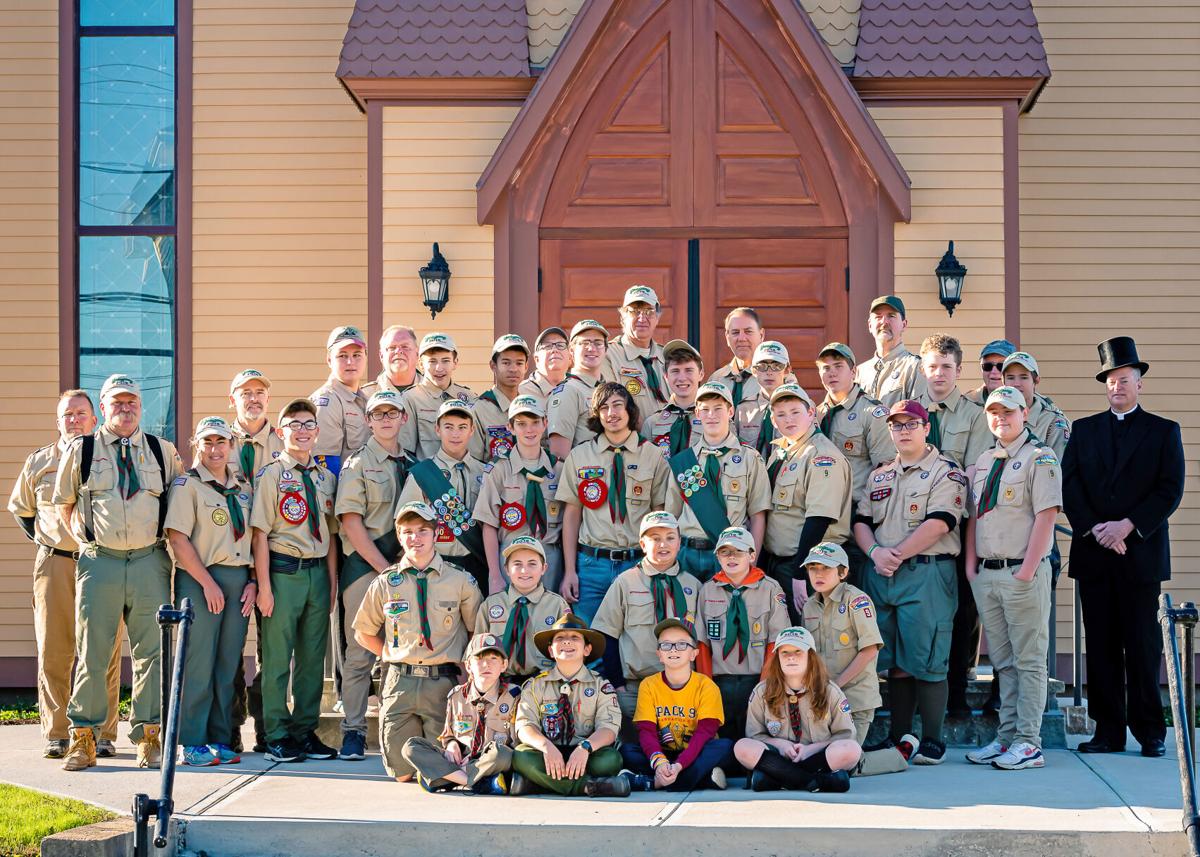 The current Boy Scout Trroop 9 poses in front of the newly rebuilt St. Michael the Archangel Church in Pawcatuck in November 2019, with the Rev. Dennis Perkins in period hat. (Carmen Garcia Photography) 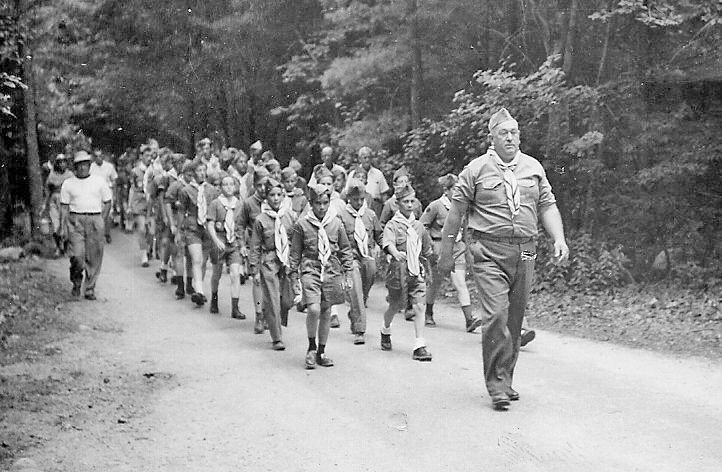 The original Troop 9 poses in front of St. Michael the Archangel church in July 1920, with the Rev. John Keane in top hat, before marching down Liberty Street to “crash” the Westerly Fourth of July Parade. The troop had been rejected in its application to join the parade because of anti-Catholic bias. Courtesy of Troop 9

The current Boy Scout Trroop 9 poses in front of the newly rebuilt St. Michael the Archangel Church in Pawcatuck in November 2019, with the Rev. Dennis Perkins in period hat. (Carmen Garcia Photography)

PAWCATUCK — In 1920, a young priest, bubbling with energy and idealism, arrived at St. Michael the Archangel Church in Pawcatuck. Within months, Father John J. Keane convinced parents to help him establish a Boy Scout troop.

A hundred years later, thanks to the efforts of Keane and others, Pawcatuck's Troop 9 remains strong and vibrant. And while COVID-19 may have put a damper on the yearlong activities that had been planned to honor the centennial, the pandemic can't stop memories of the troop from being shared, and stories from being told and retold.

"Father Keane was a ball of fire," said former Scout Larry O'Keefe of Stonington with a chuckle one day last week as he talked about the history of the troop. "He was an Irishman who spoke fluent Italian so he could relate to a lot of parishioners, including the new immigrants."

Keane also helped establish St. Michael's Maria Assunta Society in 1920, a Catholic group that sponsors the annual Feast of the Assumption celebration, a tradition brought to the region by the immigrants from Sicily that dates back to the 16th century.

O'Keefe, who serves as the troop's historian, said Keane, along with parishioner George Chapman, became the moving forces behind Troop 9's formation. The idea was so popular with local families that eventually there were 140 scouts, and three separate troops were created to accommodate the boys: Troop 1, Troop 2 and Troop 3.

The St. Michael's Boy Scout troop was the first troop in the region to be sponsored by a Catholic Church, a fact that caused a bit of a stir in the early days, O'Keefe said, and has become one of the more colorful pieces of troop history. Known as "The Westerly Parade Caper," the story began when the Scouts' application to march in Westerly's Fourth of July Parade was denied. The story, O'Keefe said, was handed down by Elaine Donahue, daughter of former Troop 9 Scoutmaster James Donahue.

"In the 1920s, parades were key community events in Stonington's easternmost village of Pawcatuck," says Gail B. MacDonald in her recently published "Hidden History of Mystic and Stonington." "Among the floats, bands and dignitaries marching, the Boy Scout troops in full regalia were an important and popular contingent."

Yet, when Father Keane and Chapman submitted their troop's application to march, it was denied — twice.

"Then reality dawned on the Scout leaders," MacDonald writes, "(that) this was the latest example of anti-Catholic sentiment against the parishioners of Pawcatuck by those in power locally."

MacDonald said a movement called the "Know Nothing" party, primarily an anti-Catholic, anti-immigration, xenophobic movement, was at its zenith in the 1920s.

"Father Keane and the boys were fired up by the snub and vowed to find a way to circumvent the subtle discrimination," according to troop history. "They developed a plan."

"The scouts all had hats that were like Smokey the Bear hats," O'Keefe said, "and Father Keane had a top hat."

On the day of the parade they dressed in their uniforms and, with their troop and American flags in hand, they first gathered in front of the church to pose for a photo, then marched down Liberty Street into Westerly and waited "patiently and politely on the sidelines for the parade to arrive," according to the Troop 9 history.

As the Boy Scout division approached, Father Keane waved his top hat in the air and led his boys, 56 strong, onto the road, and they joined the parade. The crowds on the sidelines roared and cheered and clapped their approval. They were never again "rejected" when they requested to join a Westerly parade.

"It would be the last time a parade committee tried to prevent the Catholic Scout troop from participating in a local parade," MacDonald writes.

Troop 9 is also the oldest troop in the Westerly-Pawcatuck region, O'Keefe said, and the only Connecticut troop to have its own cabin at Camp Yawgoog, Rhode Island's famed Boy Scout Camp.

O'Keefe said Loretta Mahoney Chapman and Jessie Hughes Smith formed a Girl Scout troop two years later in 1922. Girl and Boy Scouts participated in parish socials and plays, had an award-winning fife and drum band and bugle and drum band and even produced a 20-page monthly parish newspaper. In 1925, Hector Richards became the first scout from Troop 9 to earn an Eagle Scout Badge, scouting’s highest award. A total of 88 scouts from Troop 9 have achieved Eagle since then.

O'Keefe, who was a member of Troop 9 as a boy, said there is one man whose story is an essential piece of Troop 9 history.

Charles D. Keegan Sr., the troop's longest-serving scout master, made an indelible mark on Troop 9 when he took command in 1951. For the next 30 years, O'Keefe said, Keegan would profoundly influence the lives of hundreds of scouts.

A retired Coast Guard commander who served in the Pacific during World War II, Keegan lost his wife after the birth of their sixth child. While he raised his children as a single father, he also helped raise a generation of scouts.

O'Keefe said Keegan, who had a way of drawing the best out of the boys, changed the lives of young scouts forever.

"He was an incredible man," O'Keefe continued, "an amazing man ... one in a million ... he dedicated his life to scouts."

The cabin at Camp Yawgoog, Keegan Cabin, is named in his honor.

While most of Troop 9's centennial events have been canceled or postponed for 2020, the scouts do plan to continue with a few events, pandemic protocols permitting. On Aug. 16, scouts will join members of the Maria Assunta Society of St. Michael's in a procession to celebrate the Feast of the Assumption. In September, they plan to have a grand celebration weekend at Camp Yawgoog, with ceremonies, tours, displays, a dedication and a closing campfire.

In November, the late Lance Cpl. Billy Labreque, who was killed in Vietnam — the only Troop 9 Eagle Scout to give his life in war — will be honored when a plaque will be placed on his grave in the St. Michael New Cemetery. A ceremony will also be held to honor all deceased scouts and leaders, O'Keefe said. In December, plans are still in place for a 100th anniversary Eagle Scout and Troop Court of Honor.

O'Keefe, has been working with members of the 100th Anniversary Planning Committee — co-chairs John Sutcliffe and Will Morrissey and members Sharon Drago, Bill Howard, Mark Mercier, Brian Murphy, Mike Murphy, Mark Robinson, Fred Shawyer, Phil Volk, George Werrbach, Sandy Whewell and Mike Whewell — to catalog the history of the troop and to spread the word about the centennial events.

Sutcliffe, an Eagle Scout who was in Troop 9 during the days Charlie Keegan was Scoutmaster, said while COVID-19 protocols may still be pending for the Camp Yawgoog event, committee members and current scouts are definitely planning to participate in the Maria Assunta Society's procession on Aug. 16.

The committee members have a framed proclamation and two badges they plan to present to St. Michael's pastor, Father Dennis Perkins, Sutcliffe said, "something that can hang in the parish hall."

"Scouting was a huge part of my life," said Sutcliffe, who reconnected with his Troop 9 family when O'Keefe urged him to join the planning committee.

Sutcliffe said anyone with questions about the upcoming events, or with Troop 9 news to share, can contact O'Keefe by email at LOKeefe@aol.com or by telephone at 860-495-5632.