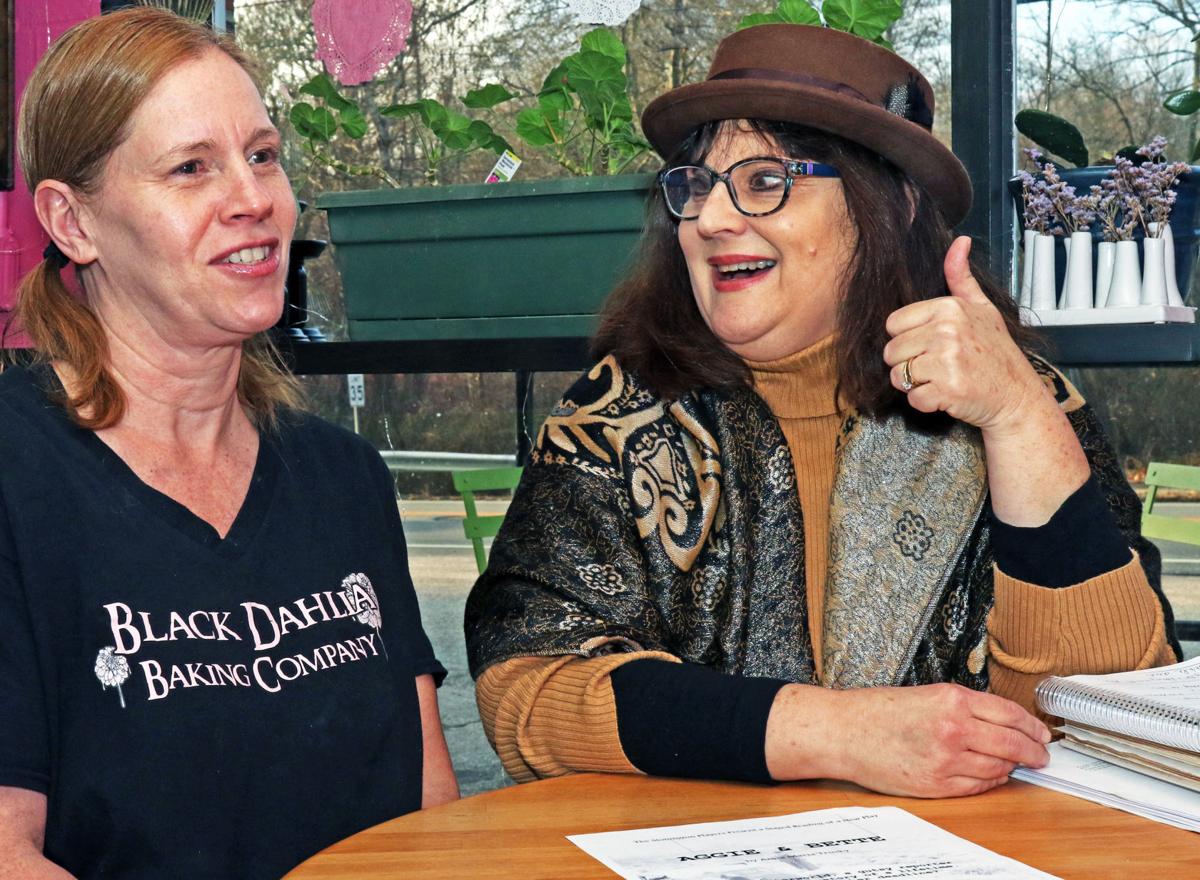 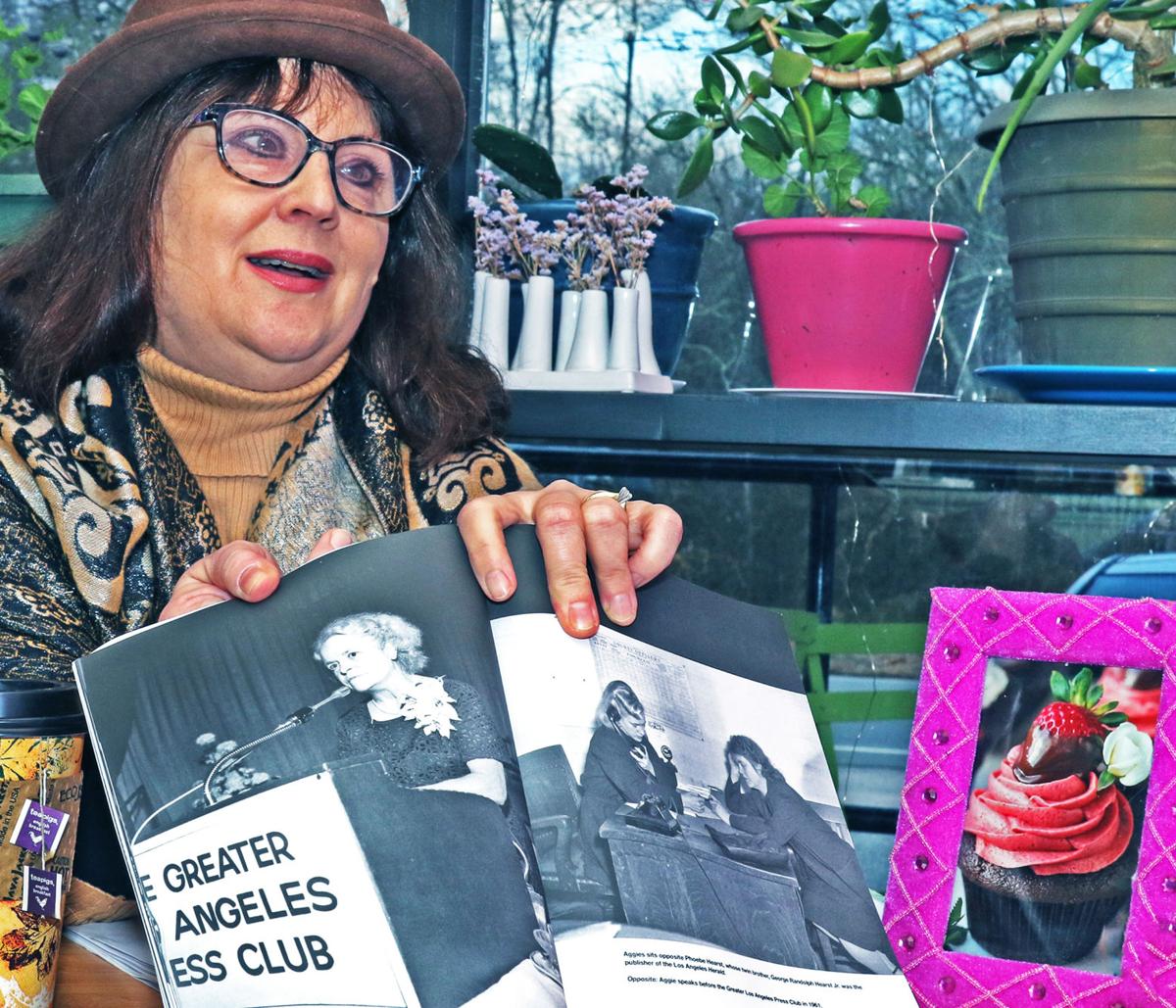 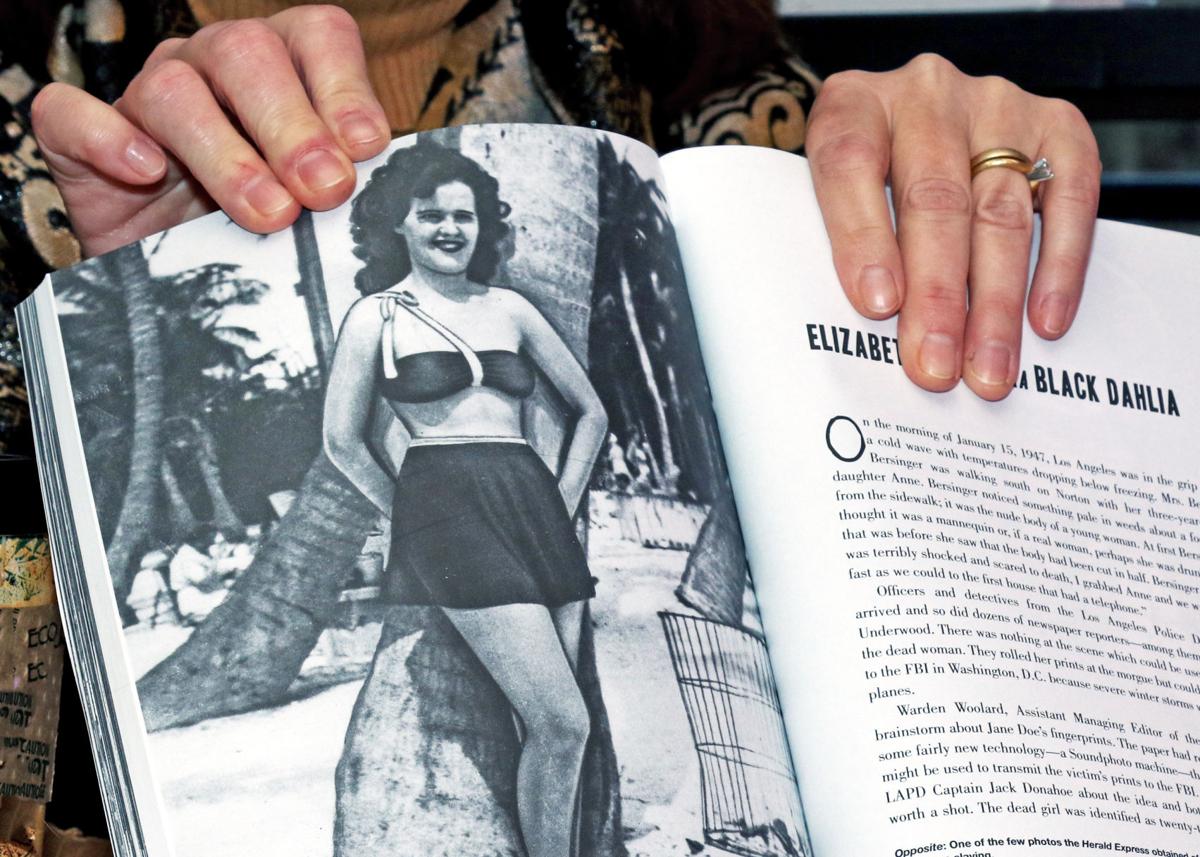 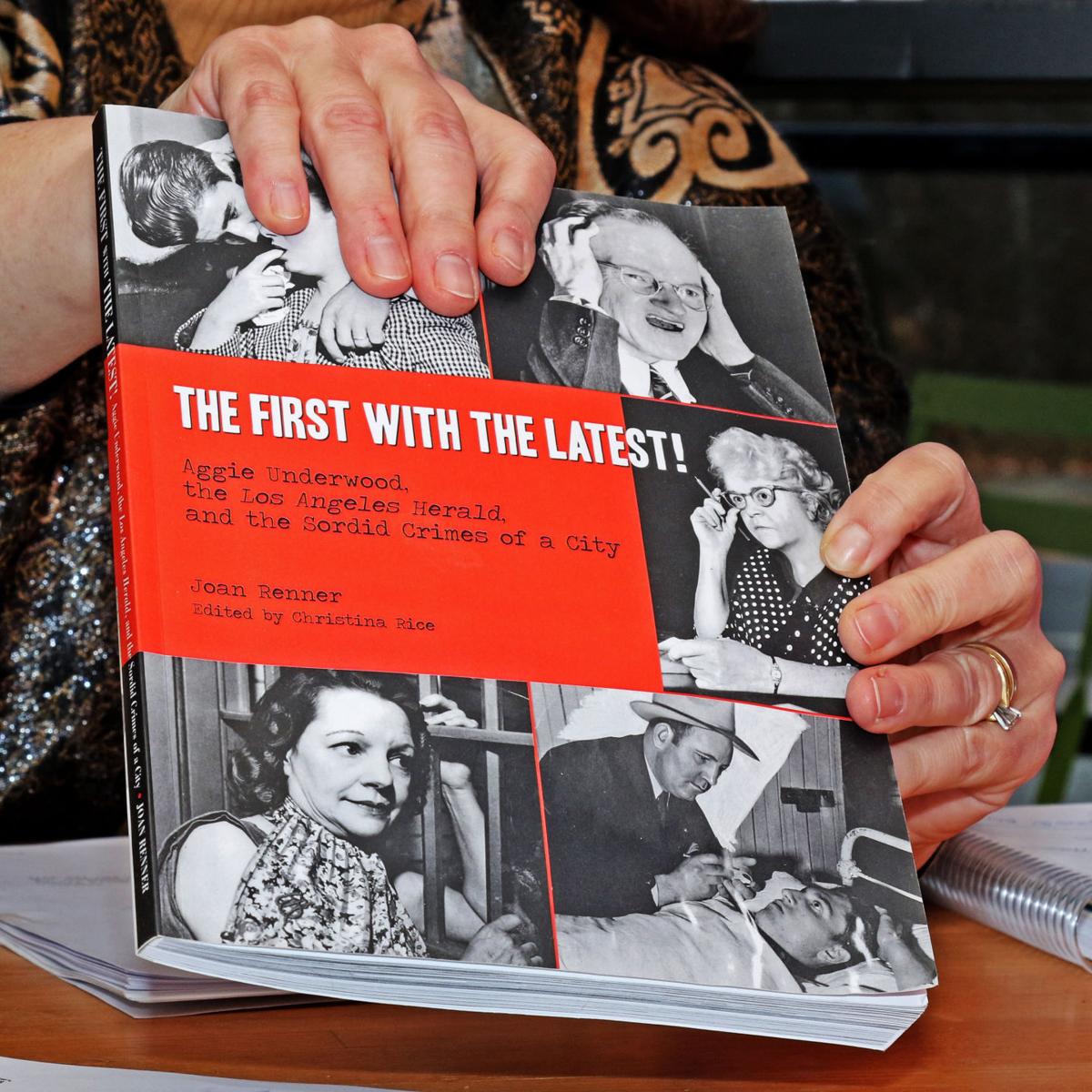 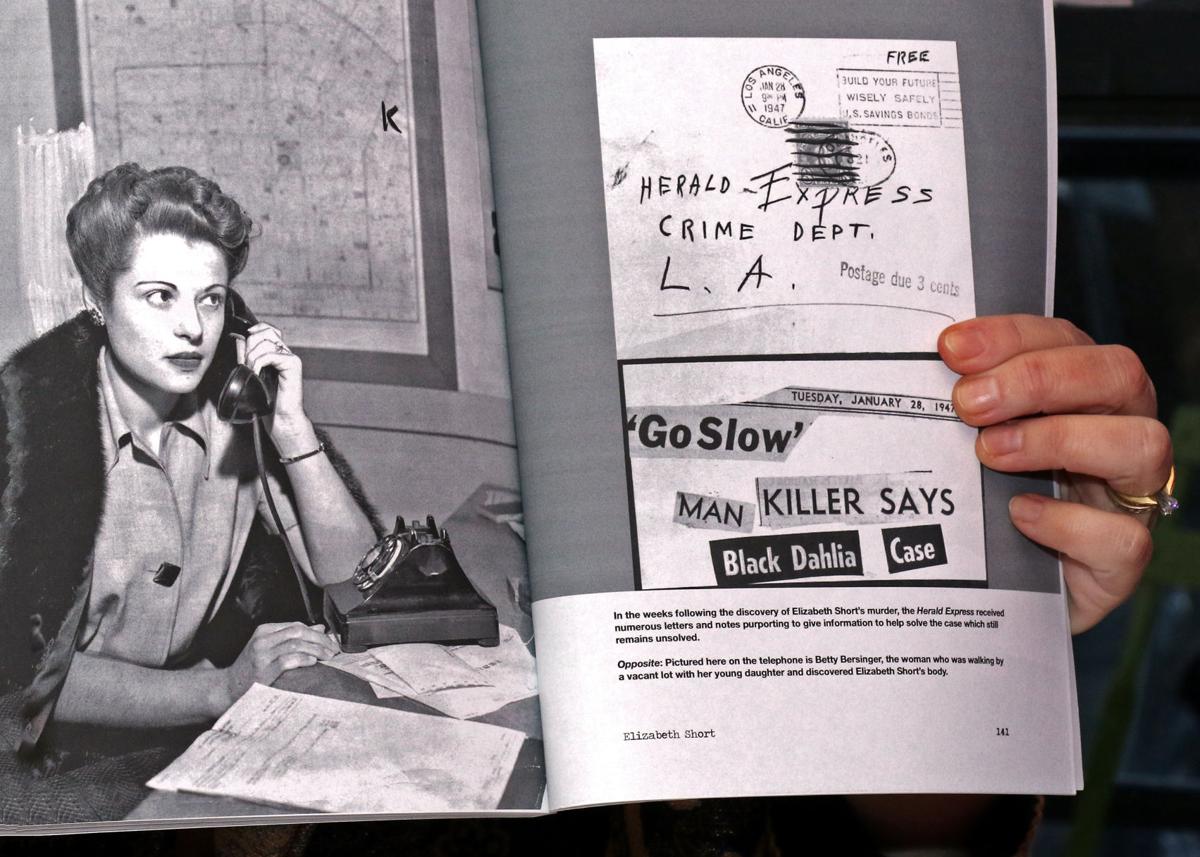 Betty Bersinger who discovered the body of Elizabeth Short and one of the notes claiming responsibility sent to the LA Herald-Express. Playwright Anna Maria Trusky discussed her new work, "Aggie & Bette," which centers on the unsolved infamous Black Dahlia murder case in Los Angeles in 1947, during an interview on Wednesday, January 8, 2020. Harold Hanka, The Westerly Sun 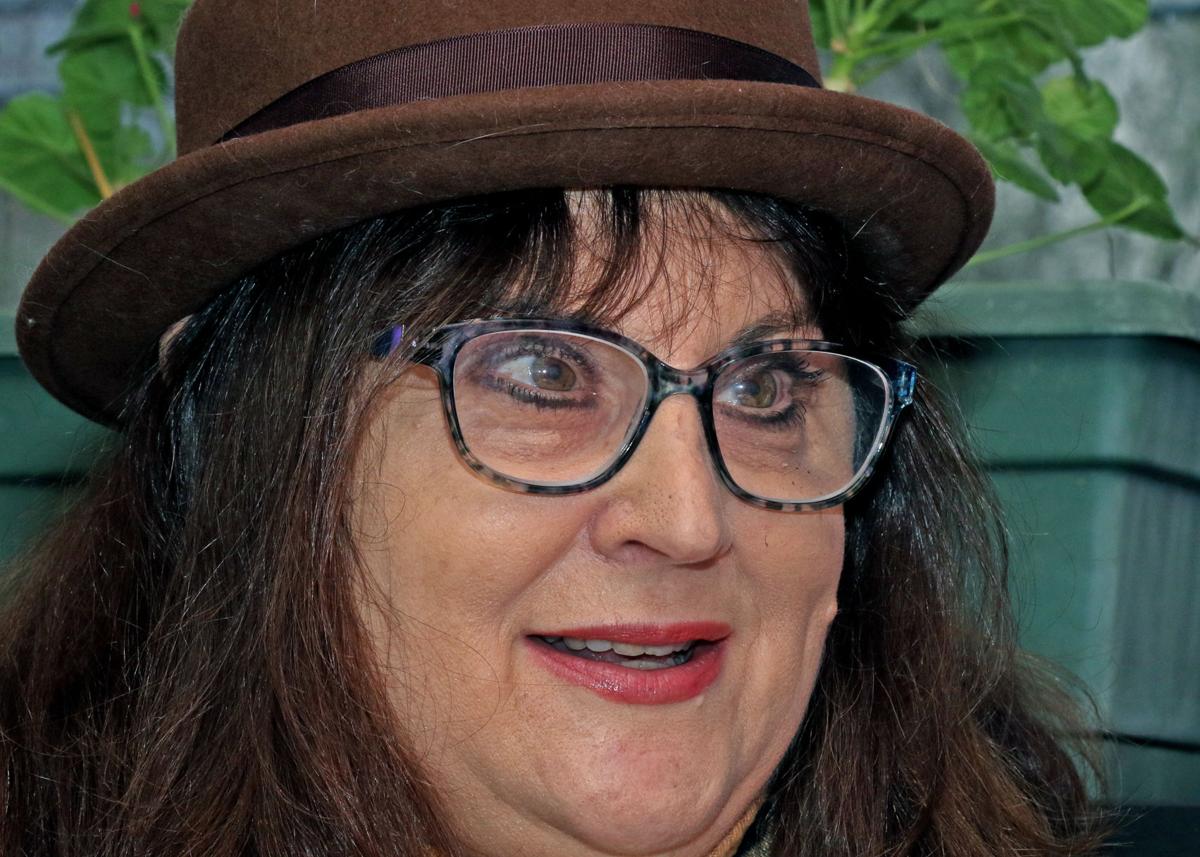 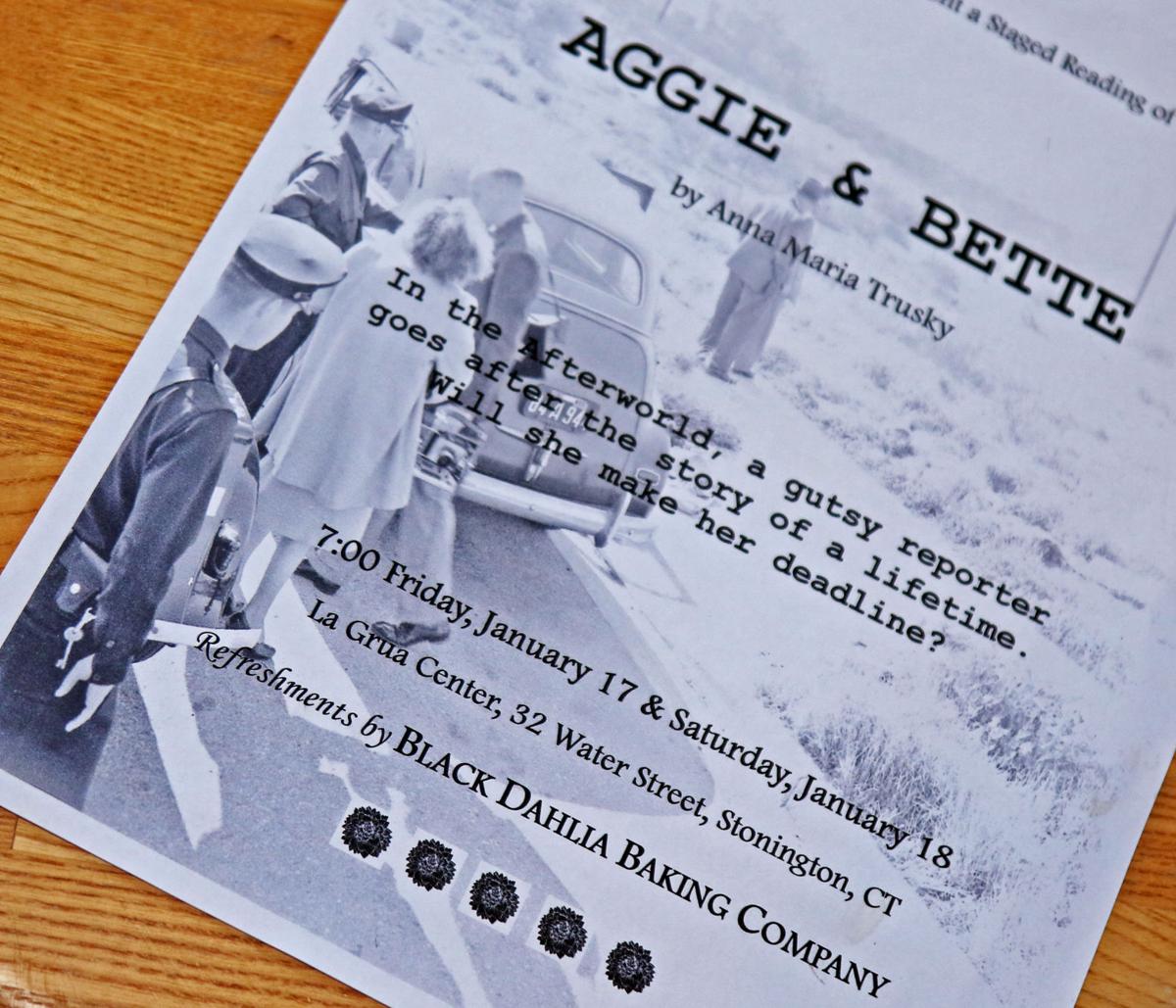 Betty Bersinger who discovered the body of Elizabeth Short and one of the notes claiming responsibility sent to the LA Herald-Express. Playwright Anna Maria Trusky discussed her new work, "Aggie & Bette," which centers on the unsolved infamous Black Dahlia murder case in Los Angeles in 1947, during an interview on Wednesday, January 8, 2020. Harold Hanka, The Westerly Sun

PAWCATUCK — For Mystic-based playwright Anna Maria Trusky, the infamous unsolved murder in 1947 of Elizabeth Short — "The Black Dahlia" — has all the more significance today, 73 years later.

"I was driving by one day and I saw the sign, 'Black Dahlia Bakery,'" Trusky recalled with an amazed look on her face. "And I said, 'What?' "

Trusky, who serves as president of the Stonington Players, has written a fictional play about the gruesome murder of Elizabeth Short — a 22-year-old unemployed waitress — and Agness "Aggie" Underwood, the crime reporter who covered the story for William Randolph Hearst's Herald-Express in Los Angeles. The play, "Aggie & Bette," will make its debut next week at La Grua Center in the form of a staged reading sponsored by the theater company.

"I came over right off the bat and I told her that I'd love for her to create some custom refreshments when we produced the play," said Trusky. "With the utmost respect, of course."

"Of course," said Thorne with a smile. "I'm thinking we'll make some cupcakes and cookies."

With tasteful touches of course, the two women agreed.

While Thorne didn't exactly name her bakery after the Black Dahlia murder, the connection can't be readily dismissed, she said.

Her two sons,  Dustin and Quinton, are fans of the heavy metal band The Black Dahlia Murder, and the whole family enjoys film noir murder mysteries — factors that weighed into the family's decision-making when trying to find the ideal name for the bakery. But her late grandfather's love of dahlias carried equal weight. Her grandfather, Anthony Lionetti, played an important, supportive role in her life, Thorne said; he taught her to garden, and he loved flowers.

"It all sort of came together," Thorne said.

Trusky said she had a fascination with the story of Elizabeth Short since she was a girl and first heard of the young woman who had moved across the country, by herself, perhaps to seek fame and fortune.

"It might have been a movie that was on TV, with Lucie Arnaz playing Elizabeth Short," said Trusky of her initial intrigue. "I just remember having this image of this beautiful young woman with dark hair being found murdered in an empty lot," she added. "But it was too horrible for me to read much about it until I was an adult. I knew the case was unsolved and I kept hoping somehow it would be, so she could have justice."

"You just want justice for the poor woman," said Trusky. "Her story really resonates with me. Here she was living in Medford, Massachusetts, always being told she was beautiful, and she and her little friends loved going to the movies ... so maybe she goes to Hollywood to be discovered ... like Lana Turner."

"There is so much to this story," she said. "There were hundreds and hundreds of detectives and cops roaming the city of Los Angeles for weeks and weeks after Betty's murder."

Adding to Trusky's curiosity was something she learned a few years ago when she watched a YouTube movie about the murder.

"I was struck by the fact that there were only men on the scene when the body was found," she said, "Yet, a prominent reporter named Agness Underwood was there that day too. She was completely erased from the story."

"I've been a reporter all my adult life," said Trusky, who has worked as a writer and editor and has had a number of her plays produced regionally, "and to think there was this woman who was so much a part of the story  ... just disappearing."

Add to that, she said, is the fact that Underwood was taken off the Black Dahlia story and promoted to city editor right in the middle of it.

Underwood was an intriguing and fascinating woman, said Trusky: a woman who worked in the male-dominated newsroom of a major newspaper and became one of the paper's best crime reporters.

Her first assignment was to interview Amelia Earhart following the aviator's historic solo flight from Hawaii to California, said Trusky, and she even got to interview Clark Gable.

"Yet nobody mentioned she was there," said Trusky, pointing out that Joan Renner, a "writer, lecturer, and a social historian with an expertise in historic Los Angeles crime," and the woman behind the Deranged L.A. Crimes website, has been telling Underwood's story.

Renner's book, "The First with the Latest," is "a good source for folks who want to read more about the Black Dahlia murder," she added.

"She is a social historian from L.A. who is also a big Aggie fan and has compiled quite a bit of information on her," said Trusky. Underwood's autobiography, "Newspaperwoman," published 1949, is out of print but copies are sometimes available online, Trusky said.

In an article Renner wrote in 2013 for LA Magazine, she said; "Dahlia conspiracy theorists sometimes point to the timing of Aggie’s promotion as proof that she was close to discovering the identity of Short’s slayer."

"Many years after the Dahlia case went cold, Aggie told her grandsons that she knew who had murdered Elizabeth Short," Renner writes. "When asked for the name of the killer, all she would say was 'he’s dead and it doesn’t matter anymore.'"

"These women need to have their due," said Trusky, who has been in touch with Underwood's great grandson.

Ever since she began writing the play, she said, she's experienced a string of unusual coincidences. For instance, she said, when she and her husband, Paul, bought tickets online to see a "David Bowie Celebration" concert, they thought the concert was in Boston. It turned out that the concert was just north of Boston, at the Chevalier Theatre in Medford, Mass., the town where Elizabeth Short grew up and where she attended Medford High School.

"Then, when we got to Medford," she said, "I walked into a CVS and was thinking about Elizabeth, my eyes landed on a product called 'LA Girl.'"

"I just kept thinking, 'This woman wants me to write about her,'" Trusky said.

"And just think," she added, "today marks the last day Betty Short mysteriously disappeared out the door of the Biltmore."

On Jan. 9, 1947, Short left the Biltmore Hotel in downtown Los Angeles and was never seen alive again. Almost a week later, according to an FBI report, a mother taking her child for a walk in the same neighborhood "stumbled upon a gruesome sight."

"The murder of the young woman sent shock waves through L.A. and the nation," said Trusky, "due its extreme level of savagery and debauchery ... not seen before or since."

"Aggie and Bette," said Trusky, based on the lives of Short and Underwood, "takes place in a dark realm of the afterworld."

"I knew I needed to write about them both, to tell both of their stories," said the playwright, "so I thought I'd put them together and see what happens."

"I think I can find more out on the other side," she said, and ask the questions everyone wants the answer to.

Although Short is often portrayed as a "floozy or a prostitute, Trusky said there is no proof of the accusations.

She was a head-turner who only had to "bat her baby blues" for a dinner or a place to stay and maybe she liked to party, but she was not a bad woman, Trusky said.

"Do you know there were more than 300 suspects, dozens of people who made confessions and 50 suspects interviewed?" she asked.

"I have a lot of affection for Aggie," she said, "and poor Betty ... I think she was depressed and lonely ... and she was penniless."

A talk-back will be held after each reading with Trusky and the cast members.

"It's probably best suited for people 17 and older," said Trusky. "It's not all gruesome, but it's probably better for older people."

"It's not a Disney story in other words," said Thorne with a chuckle. "She's definitely not a Disney princess."

There are no tickets, reservations or admission, but a suggested donation of $10 per person will be accepted, Trusky said.

Letter: Battle between good and evil in the Capitol