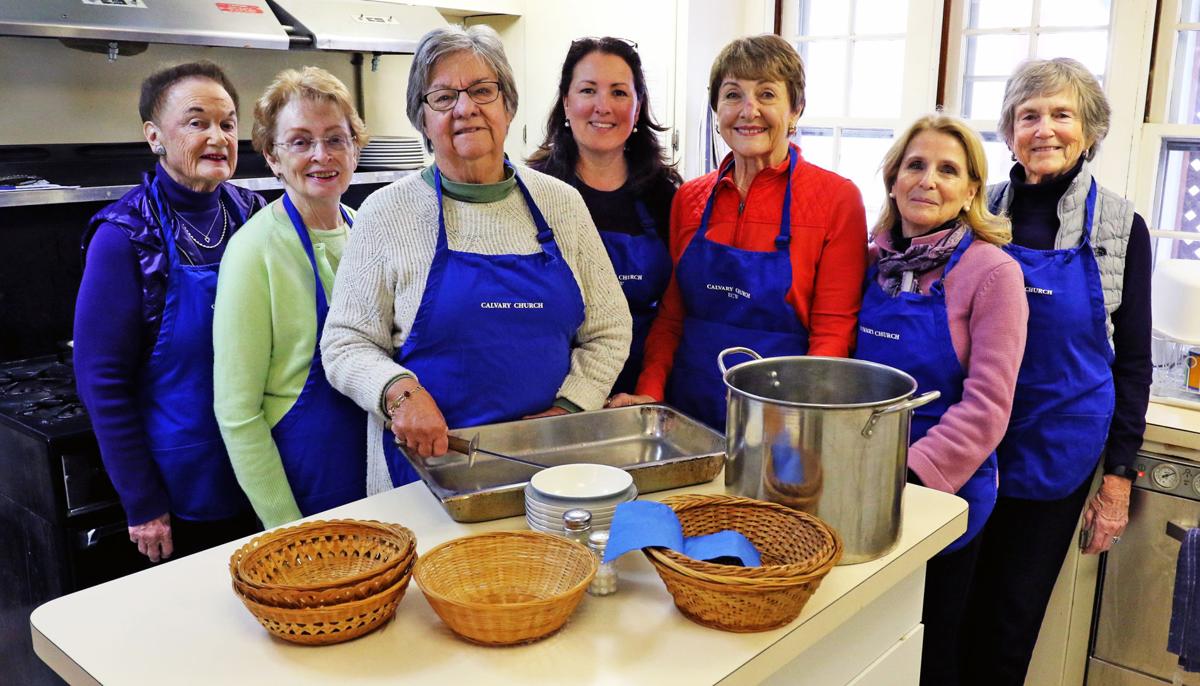 From left, Marianne Holly, Lois Glazier, Amy Carvell, Liz Hall, Carole Barnard, Melinda Mears and Lucia Johnstone, members of the Episcopal Church Women who oversee the Lenten Luncheon series at Calvary Church in Stonington. The luncheons will begin this Monday and run through March 30 as a fundraising effort for nonprofits. Feb. 27, 2020. Harold Hanka, The Westerly Sun 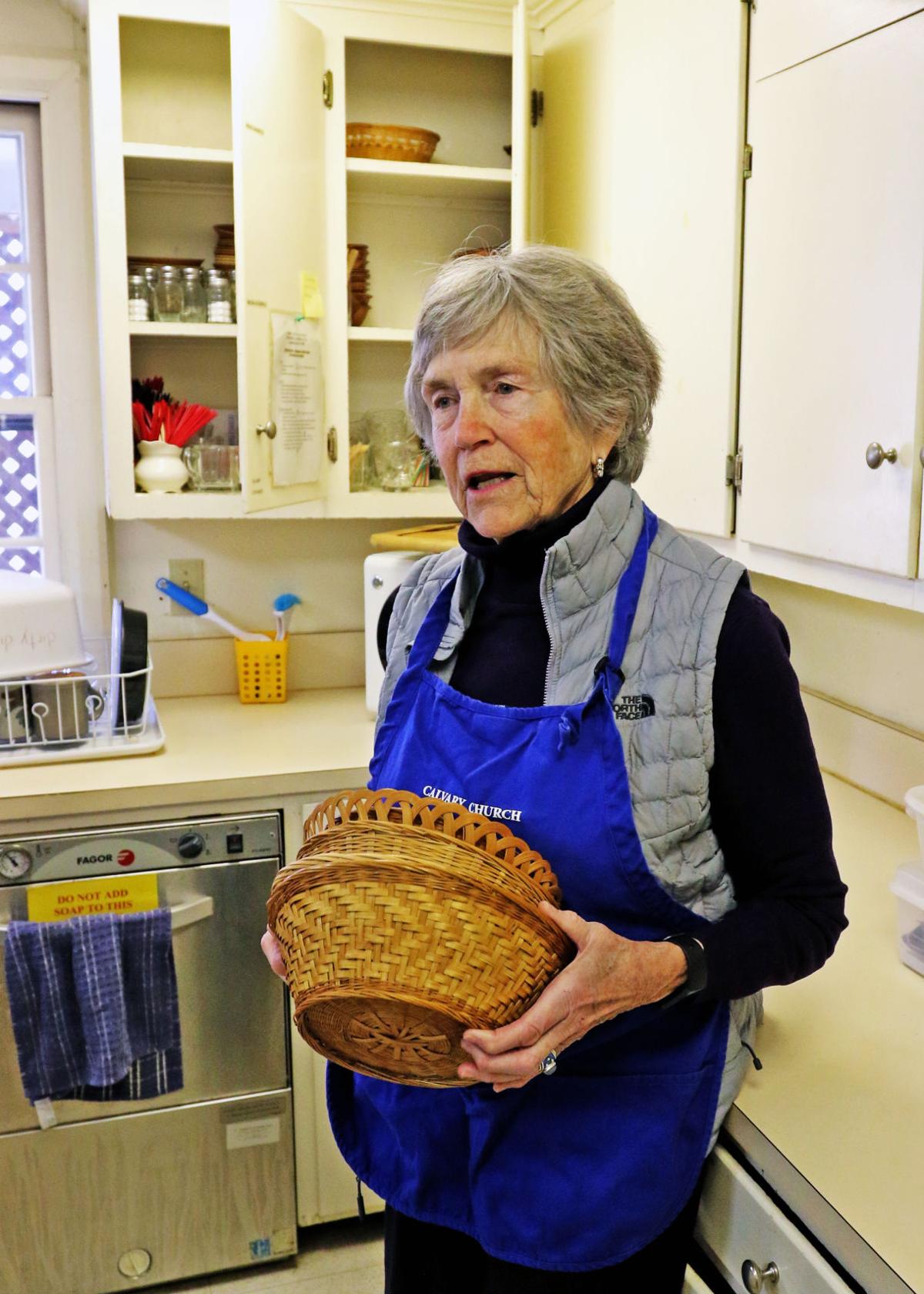 Lucia Johnstone of Stonington co-chairs the committee that is in charge of Calvary Church's Lenten Luncheon series, now in its 55th year. The luncheons, which begin Monday, serve as a fundraiser for a number of nonprofit groups. Feb. 27, 2020. Harold Hanka, The Westerly Sun 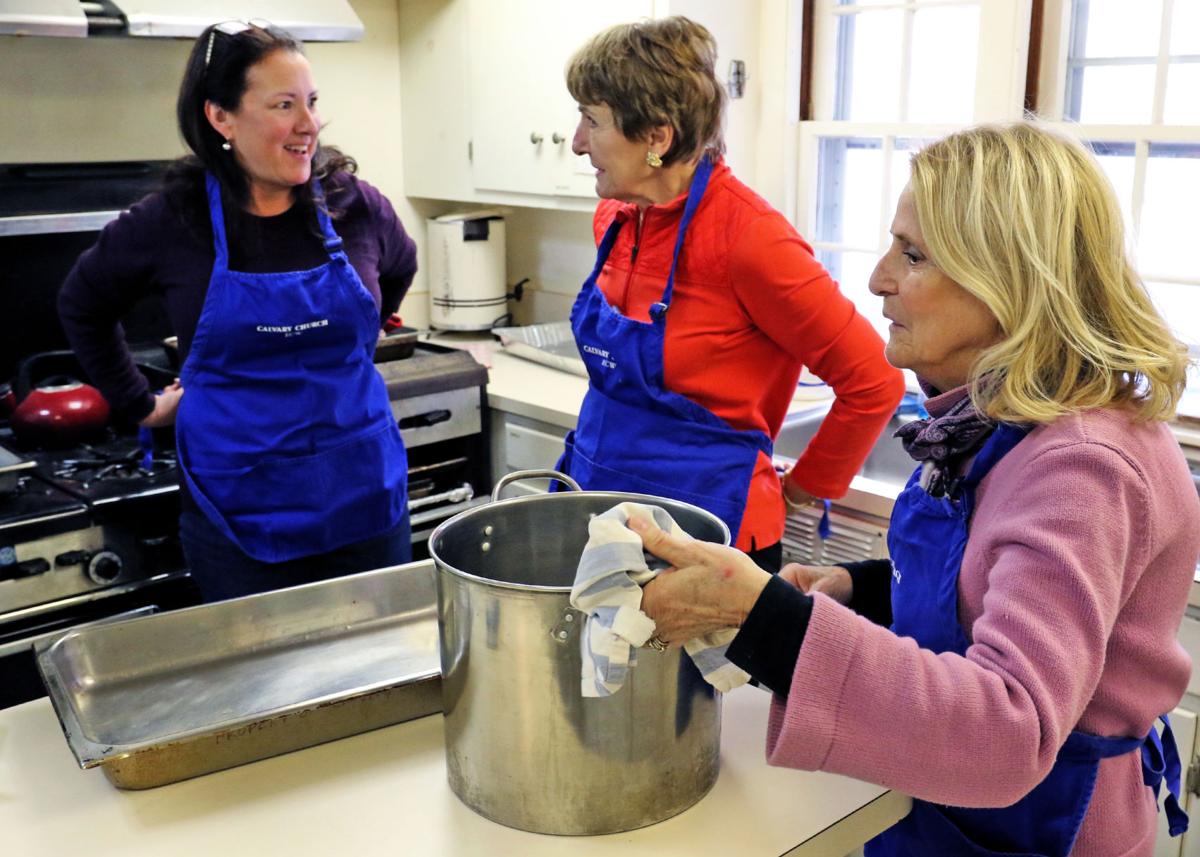 From left, Marianne Holly, Lois Glazier, Amy Carvell, Liz Hall, Carole Barnard, Melinda Mears and Lucia Johnstone, members of the Episcopal Church Women who oversee the Lenten Luncheon series at Calvary Church in Stonington. The luncheons will begin this Monday and run through March 30 as a fundraising effort for nonprofits. Feb. 27, 2020. Harold Hanka, The Westerly Sun

Lucia Johnstone of Stonington co-chairs the committee that is in charge of Calvary Church's Lenten Luncheon series, now in its 55th year. The luncheons, which begin Monday, serve as a fundraiser for a number of nonprofit groups. Feb. 27, 2020. Harold Hanka, The Westerly Sun

STONINGTON — It's the season of Lent for Christians around the world, and the season of "Lenten Luncheons" at Calvary Church in Stonington Borough. Now in its 55th year, Calvary’s Monday Lenten Luncheon series, part of the church's Outreach Program, begins March 2, and runs each Monday through March 30.

For $12, lunchgoers can enjoy a different homemade entrée each week, along with a salad, a bread basket, a beverage and a dessert, also made from scratch. Proceeds from the luncheons are donated to charity.

On a recent windy morning, seven women from Episcopal Church Women, the group that oversees the fundraiser, gathered at the church's Parish House to talk about the luncheons and share menus and memories.

Each weekly luncheon recognizes one of the nonprofits organizations that receives the funds, according to Amy Carvell of Weekapaug, who oversees publicity for the group. This Monday's luncheon, for instance, will feature baked flounder and will recognize Fellowship House Ministries, a faith-based agency in Groton dedicated to assisting men released from prison and people recovering from substance abuse and addictive behavior.

"Fellowship House offers clients individualized programs designed to keep them from being caught up in the revolving door of relapse while working toward a successful transition to society," Carvell said.

Carvell, who is in charge of the first luncheon along with Melinda Mears, said that roughly $7,000 was distributed at the end of the 2019 luncheon series.

Lucia Johnstone of Stonington, who co-chairs the Luncheon Committee with Liz Hall, also of Stonington, said the luncheons have always been done for charity. "But we actually began them because all the local restaurants were closed on Mondays ... and the wife of our minister loved to cook," she said. "She made a delicious clam chowder."

Johnstone, now in her late 70s and the longest serving member of the group, said the group serves anywhere from 60 to 100 people per luncheon, and it takes about 20 volunteers to make things run smoothly.

"And we offer takeout too," added Hall. "Which is so helpful."

Hall said she teamed up with Johnstone this year to make sure the tradition continues. "We don't want it to die out so we are involving a new generation," she said.

Johnstone said, "It's such a wonderful tradition, and it brings the community together."

Hall said she enjoys the fellowship involved with the luncheon planning, cooking and serving, and Mears, too, said she loved the sense of community.

Committee member Marianne Holly, who lives "on the Mystic side of Stonington," said she's done just about every job at the luncheons.

"I cook, I waitress and I find when I get a group of my friends to come, they end up telling their friends and then they come," Holly said. "I suggest that they come back and bring a friend."

"I love to socialize," added Holly, who graduated from Westerly High School with the class of 1952. "And this is so much fun ... everyone is so congenial."

Lois Glazier, another member of the group, said, "I think the food is delicious and it's all for a good cause."

Carole Barnard said, "We have the opportunity to experience very special friendships." She is also a member of another committee whose members are organizing a May fundraiser that will feature five consecutive days of events, including a fashion show.

Carvell said that on Monday, March 9, Shepherds’ Pie is on the menu and that day's fundraiser recognizes A Sacred Place, an organization that "offers hope to incarcerated women" at the Janet S. York Correctional Institution in Niantic.

Programs at A Sacred Place help women, many of whom are single mothers, and many with addictions, "to become successful in leading responsible, educated, spiritually enriched, drug and crime free lives," Carvell said. Program participants have one of the lowest rates of recidivism in the country, she added.

On March 16, Turkey Tetrazzini will be served and Teammates For Life, a Ugandan mission program, will be recognized. The purpose of that program, Carvell said, "is to rescue, educate and mentor vulnerable girls from impoverished villages in Uganda by empowering them through education and sports to become leaders who will help transform their communities into self-sustaining villages."

On March 23, "Bar B Que Sliders" are on the menu and The WARM Center, Westerly's emergency shelter and soup kitchen, will be recognized.

On March 30, the lunch will feature "Honey Baked Ham with all the Trimmings," and the Pawcatuck Neighborhood Center will be recognized. The final luncheon is organized by the church's Friday's Men's Group, headed up by Tom Sanford.

Each luncheon begins with Noonday Prayer at 11:45 a.m., in the church across the courtyard, Carvell said, and everyone is invited. Food is served beginning at noon.

Johnstone, a New York native who grew up in Stonington and has been a Realtor since 1974, said she's thinking of stepping back a bit from her duties overseeing the Lenten luncheons.

"Here I am all these years later," she said with a chuckle, "I think it's time for me to retire ... or to pass on the golden ladle."