Skip to main content
You are the owner of this article.
Edit Article Add New Article
You have permission to edit this article.
Edit
Welcome, Guest
Home
News
Sports
Obits
Opinion
Photos
Classifieds
Things to Do
Special Sections
More
1 of 3 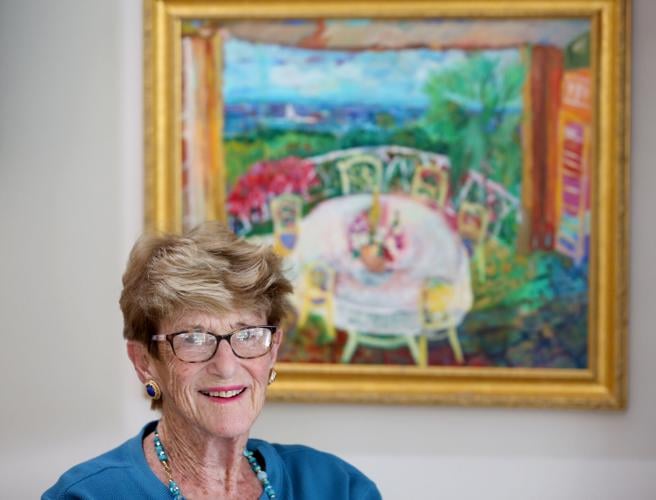 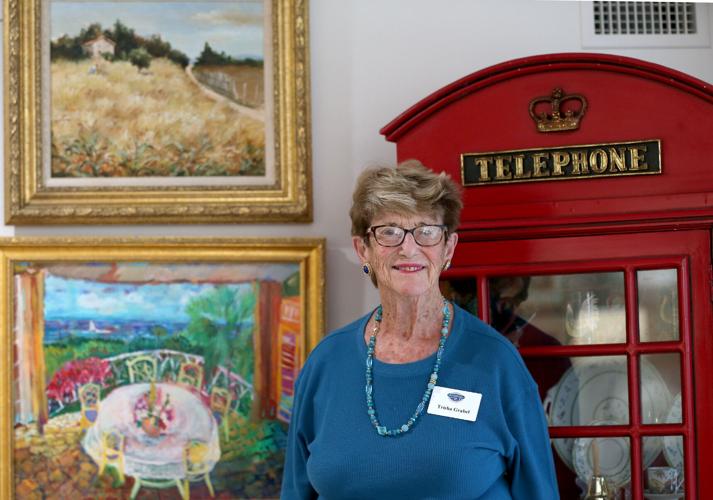 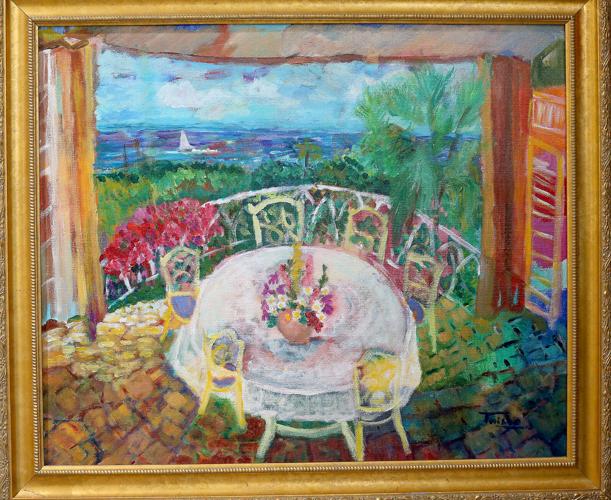 A painting by Tricia “Pat” Grabel, of Mystic, a landscape painter who resides at resident at Stoneridge, Wednesday, Sept. 14, 2022. |Tim Martin, The Westerly Sun

A painting by Tricia “Pat” Grabel, of Mystic, a landscape painter who resides at resident at Stoneridge, Wednesday, Sept. 14, 2022. |Tim Martin, The Westerly Sun

WESTERLY — With glitter in her hair and a smile upon her face, 88-year-old Trisha Grabel stood in the middle of the Tapped Apple Cidery & Winery Friday night, greeting friends, fans and art-lovers.

Dozens of admirers — many from the StoneRidge senior living community in Mystic, where Grabel now makes her home — and some others, members of the Westerly Village, packed into the small cidery to view Grabel's eye-catching paintings — acrylic landscapes, florals, stills and abstracts "inspired by the light, ocean and beautiful scenery of Westerly and Mystic" — hanging on the walls.

"Another one just sold," said a delighted Grabel, who was in the midst of the opening of her first solo art show in 10 years, and clearly enjoying herself. "Now I've sold two."

One of the paintings was sold to John Harkey of Providence, who stood nearby, smiling, alongside his wife, Ginger.

"How can you not love her work?" said John, who is writing a story about Grabel and her art for an upcoming edition of "Village Voices." "I love it. It makes me happy."

"She has such freedom of expression," added John.

"She has such command," said Mimi Desire, of Attleboro, Mass., who helped Grabel hang the show and was sitting at a small table by the entrance keeping track of the "Sold" stickers. "She's a great lady."

A great lady with a great story, according to Laurie Meisner, who, assisted by her husband, Bill, and John Harkney, helped Grabel write a short biography called "One Woman’s Story of Evolving from Mere Survival to Thriving — Despite All Odds."

Grabel credits Harkey and the Meisners with encouraging her to tell her story and share her artwork, which also adorns the walls of her StoneRidge apartment, where, a few days before the opening reception, she spoke about her life and art.

"I have a strong sense of color," said Grabel as she sat in her brightly decorated apartment, surrounded by plants, art and an enormous, bright red British phone booth.

"Bought in Westerly and made in China," said Grabel with a laugh as she stood next to the phone booth.

Her art work, she said, is "fueled by my exuberance, imagination, intellect and love of color and motion."

"Nothing is realistic," adds Grabel, giving credit to Pierre Bonnard, Henri Matisse and Vincent Van Gogh as inspiration for her expressionist art, and Warhol, Pollock and Frankenthaler as influences on her abstracts.

"I'm not a celebrated artist, but I celebrate my art," said the London native. "I want my art to bring joy. One of my aims is to bring happiness to other people because I am basically a happy person and I like to spread that."

But before art; before her 1939 escape from the Nazis aboard the the R.M.S. Duchess of Atholl with her nanny and brothers; before her marriage to the late Dan Grabel — a New York-based journalist who had a career as a news writer and reporter for the original "Today" show with Dave Garroway — before her successful career as a director of publicity for Conran’s home furnishings; before her return to school at the College of New Rochelle to finish a bachelor's degree; before the birth of her two sons, four grandsons and one great-grandchild, a 1 pound, 14-ounce baby named Patricia Ann Cohen, who was born in London to Alfred and Rita Cohen.

"My baby bonnet could fit on a tangerine," said Grabel with a laugh. "The doctor said I was not worth saving."

"My nanny wrapped me in cotton wool, fed me with an eyedropper, and kept me in the bottom drawer of a chest of drawers," said Grabel. "From impossible beginnings to a thriving, highly-spirited 88 year-old.

"I have the fighting spirit of the Cohens," she said. "Our motto is 'Play hard and work hard.'"

Grabel is also an accomplished athlete who swims daily and is a Senior Olympics cycling champion who has bicycled in a number of competitive races, ridden from Ottowa to Quebec, across Cuba, up the mountains of Cape Town, throughout Long Island on a "Cultural Ride," and participated in the Empire Games with dozens of medals to show for her efforts.

Grabel's parents, too, showed that fighting spirit, she said. During World War II, her mother served as the volunteer head of the Civil Defense for the Corporation of the City of London when the city "gave her a flat in the Criminal Court called Old Bailey — a place that is now reserved for murderers."

Her father, the director of Court Bros. Ltd., a chain of British furniture stores, joined the Royal Air Force and spent most of the war as a squad leader in Cairo, Egypt.

"His work wasn’t always that bad," she said. "He was a good Bridge player and was sometimes required to play Bridge with King Farouk."

Although she took painting classes when she was a young girl in England, she said, she was constantly reprimanded for refusing to copy what was in front of her.

"But I always thought I'd paint one day," she said.

Grabel, who studied at the Sorbonne, did begin painting again, but not until she was in her 60s, she said.

"I became a wild woman in my sixties," Grabel said triumphantly.

Grabel has exhibited in galleries in New York, Connecticut and Rhode Island. Her work was also included in a tri-state juried show at the Katonah Museum of Art in New York.

In 2004, Grabel and her late husband moved to Westerly. After her husband's passing nearly 10 years ago, she said, she became a member of the Westerly Village, one of four villages in Rhode Island and part of the umbrella organization known as Village Common. The group is devoted to helping older citizens "remain active, connected and independent in the home and community they love."

"Westerly Village has been very, very helpful to me," Grabel said, "not only helpful in terms of helping me get to and from great social events, since I no longer drive, but also helping me with transportation and now ... helping me get my story out — to share my own life miracle of not only surviving but of thriving despite all odds.

"Fame doesn't come overnight," Grabel joked while she sat in her StoneRidge apartment, "nor does it last more than 15 minutes.

"I take great pleasure in painting," said Grabel, smiling. "I get lost in it."

Grabel's exhibit will be on display at the Tapped Apple Cidery & Winery, 37 High St., Westerly, through Oct. 20.

"I do hope people will come and look, and see, and smell the flowers which can't be picked," Grabel joked. But they can be sold, she added, and she hopes she won't have to bring any back to StoneRidge with her when the show ends.

"I'd love to sell them all," she added with a smile.