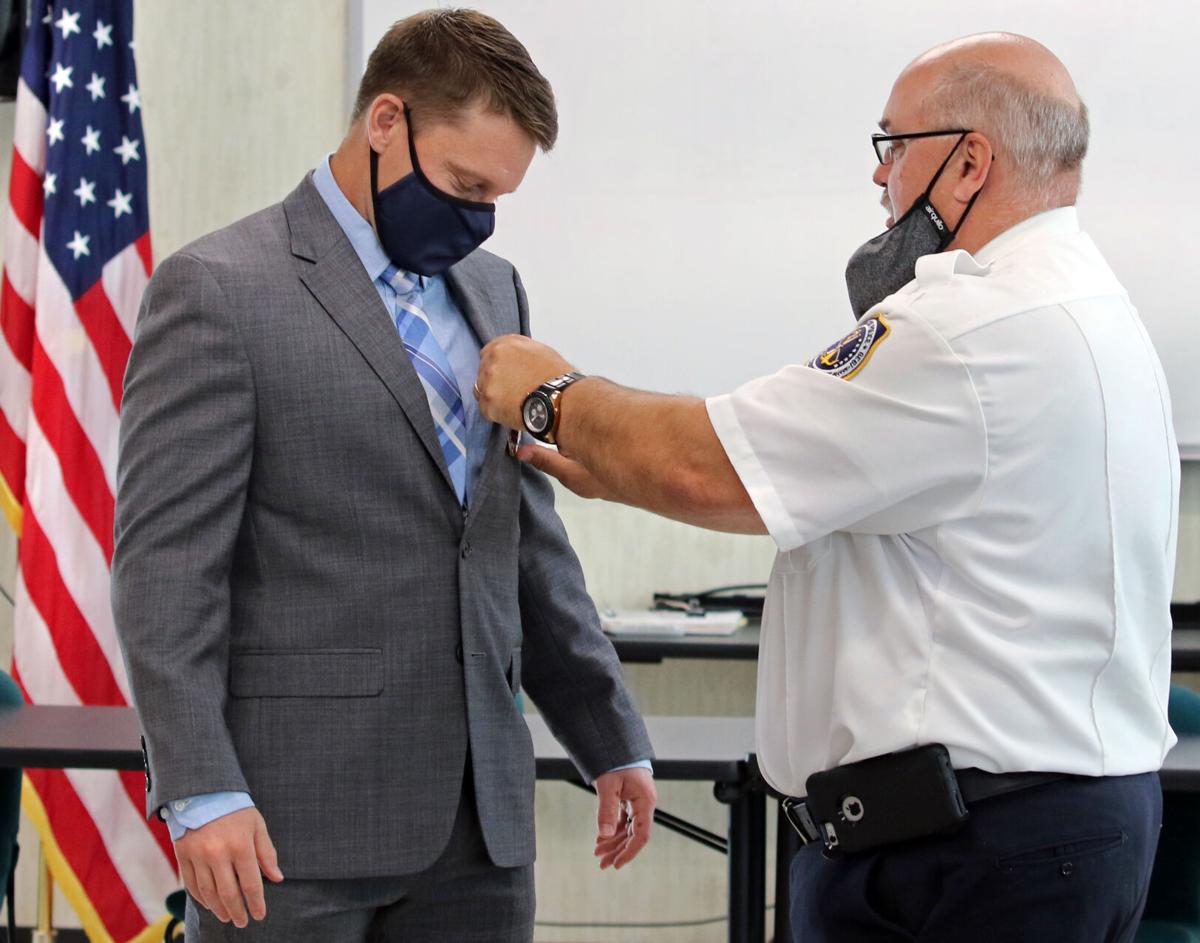 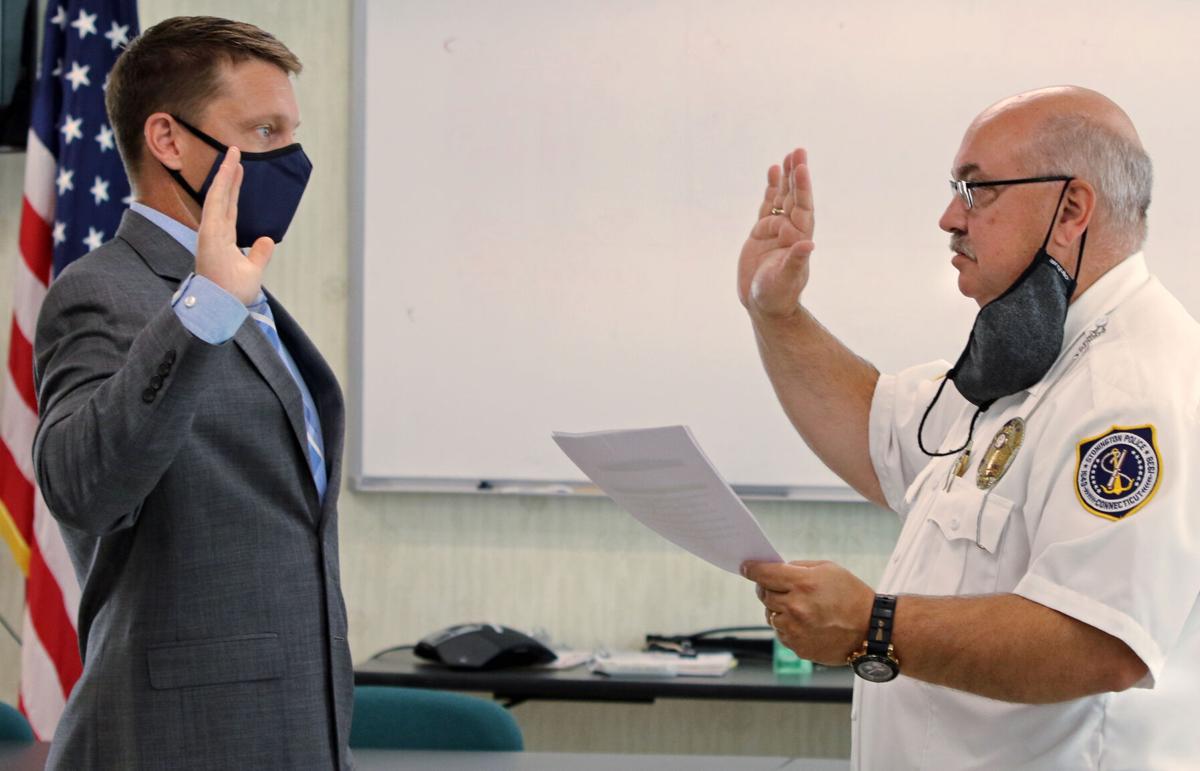 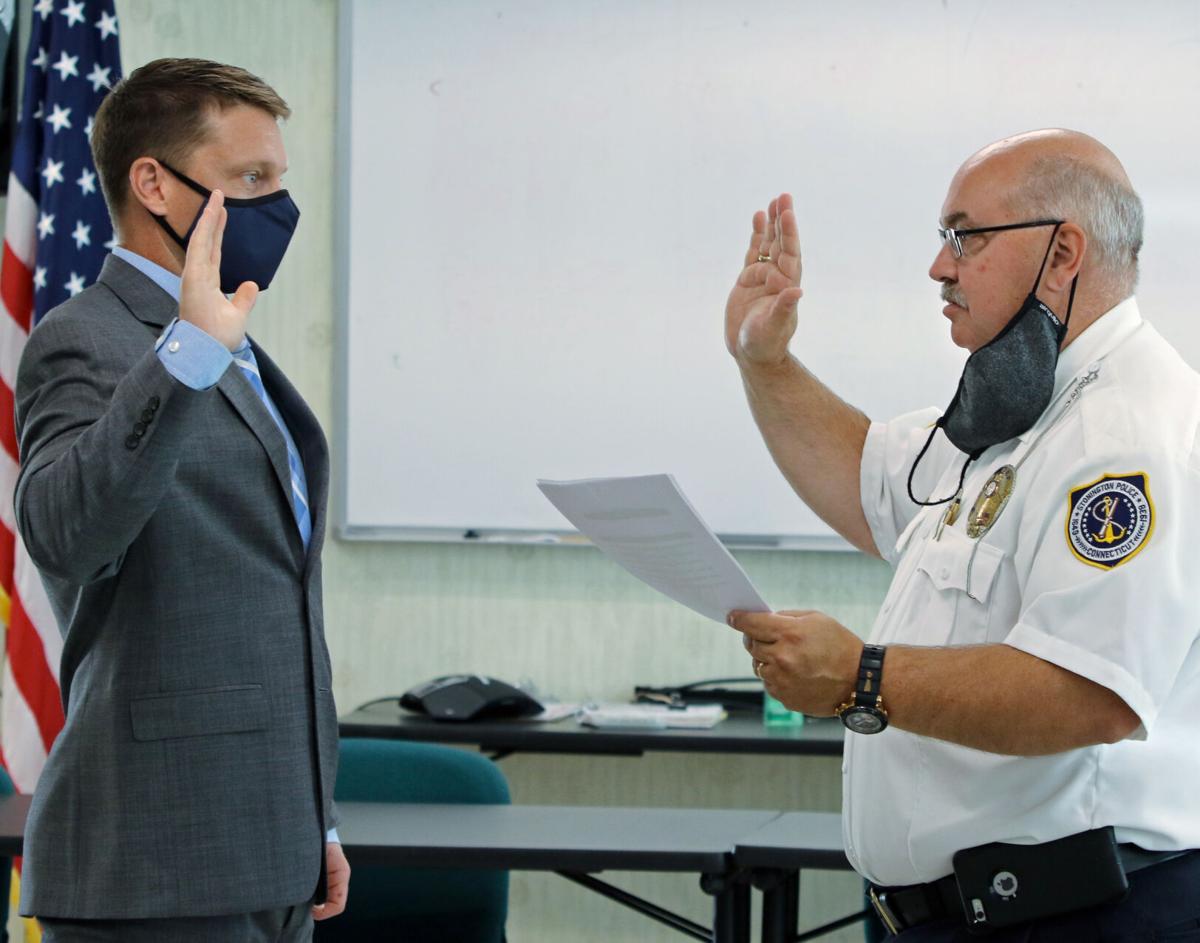 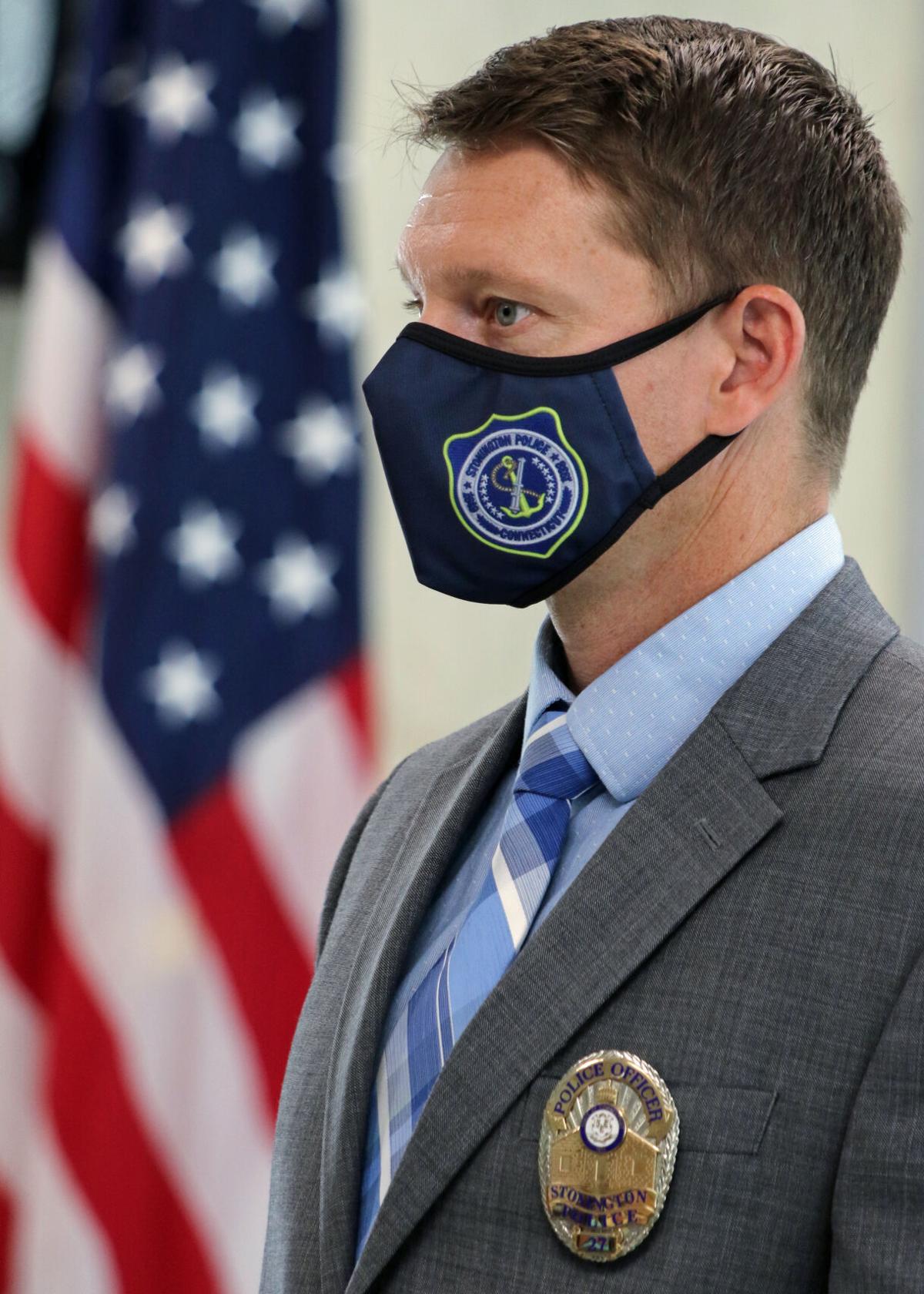 STONINGTON — When veteran police officer Kyle Miller’s son was born earlier this year, he knew it was time for a change.

An 11-year member of the Charleston Police Department in South Carolina, Miller was passionate about his job as an officer and enjoyed being able to make a difference and help people every day. He was also growing wary of the 12-hour shifts, sometimes on as little notice as three hours, an ever-growing workload and constant changeover in personnel. He wanted more stability without having to give up the career he’d been building for more than a decade.

So when Miller came across a job opening in a small, southern New England town where his wife, Kristy, had lived for about 5 years out of college, he asked her if she would be willing to consider the move.

“I told her there was a lateral opening for a position in Stonington and before I could say anything more, she turned to me and said ‘apply for that now,’” said Miller, 36, during a swearing-in ceremony at the Stonington police Department on Tuesday. “It was a perfect fit for us, and I’m glad to have the opportunity.”

A 2007 graduate of Virginia Commonwealth University in Richmond, Virginia, where he received a degree in criminal justice, Miller said he first applied to be an officer with the encouragement of a friend also seeking a job and was hired by the Charleston Police Department in 2010. Miller is also a six-year member of the Air Force reserves, where he has attained the rank of staff sergeant.

He is a new homeowner and plans to move into the house with Kristy and the couple’s two children, 2-year-old Hailey and 3-month-old Sawyer, as soon as renovations are complete. Kristy Miller is a teacher who, once the move is complete, hopes to continue her career at a local school.

Miller said that while he enjoyed his time in South Carolina, he felt that after the birth of his son, it was time to find a position that was closer to the couple’s family in the Northeast and would allow for Miller to have more family time.

“After we had a second kid, it was about improving my family’s quality of life,” said. “I truly enjoyed working in the city, but it was time to think about my family life and tamper down that chaos a little bit.”

Stonington Police Chief J. Darren Stewart said Tuesday that Miller comes to the agency with a reputation as a dependable and hardworking employee with a strong understanding of what it means to be a community police officer. He excelled at department testing and impressed members of the police commission at his interviews, Stewart and Police Capt. Todd Olson each said during the ceremony, but it was his experience that set him apart from the rest of the applicants.

“(Miller) is going to be able to come in and hit the ground running,” Stewart said. “He brings a lot of experience in law enforcement and will be able to help our department immediately.”

The newest member of the Stonington Police Department is the latest to transfer to the agency with up-to-date certifications and experience, a benefit that Police Capt. Todd Olson said has allowed the police to maintain ranks and help fill the shoes of retiring and/or promoted officers without the cost and delays that normally come with hiring a new officer.

Over the past year now, the department has seen a growing number of well-qualified candidates applying from other agencies, with six of the department’s sworn officers holding an active role in law enforcement prior to joining Stonington police. Olson said this includes recent hires such as Miller and patrol officers Joe Saunders and Jeff Hewes.

Perhaps more unusual, however, is that the department was able to hire many of these experienced officers without having to tap frequently into neighboring departments who paid for the officers' training, an act referred to as “poaching” among police administrators. In cases like Miller’s, however, Charleston would not have been able to retain him due to the distance that he and his family intended to move.

“Whenever we have applicants from another department, we ask why. Is it the pay? Is it something else?” Olson explained. “In this case, we were fortunate to get a man who was moving because he wanted to raise a family, and that came in an experienced officer with many years left who will be able to make a positive impact right out of the box.”

One aspect of the hiring process that has allowed the department to expand its reach has been use of PoliceApp, a form of online classifieds for jobs in law enforcement. Compared to previous efforts, in which the jobs were posted in local newspapers and on the town website, he said the app has expanded the department’s reach and led to a wider range of qualified candidates.

The process has also led the department to identify potential future hires as well, including a candidate from the Chicago area who is currently taking part in the hiring process.

“We have been very fortunate with our experience,” Olson said. “It’s not easy to find well-qualified candidates who are coming to us for all the right reasons. With some of these recent hires, that is exactly what we got.”