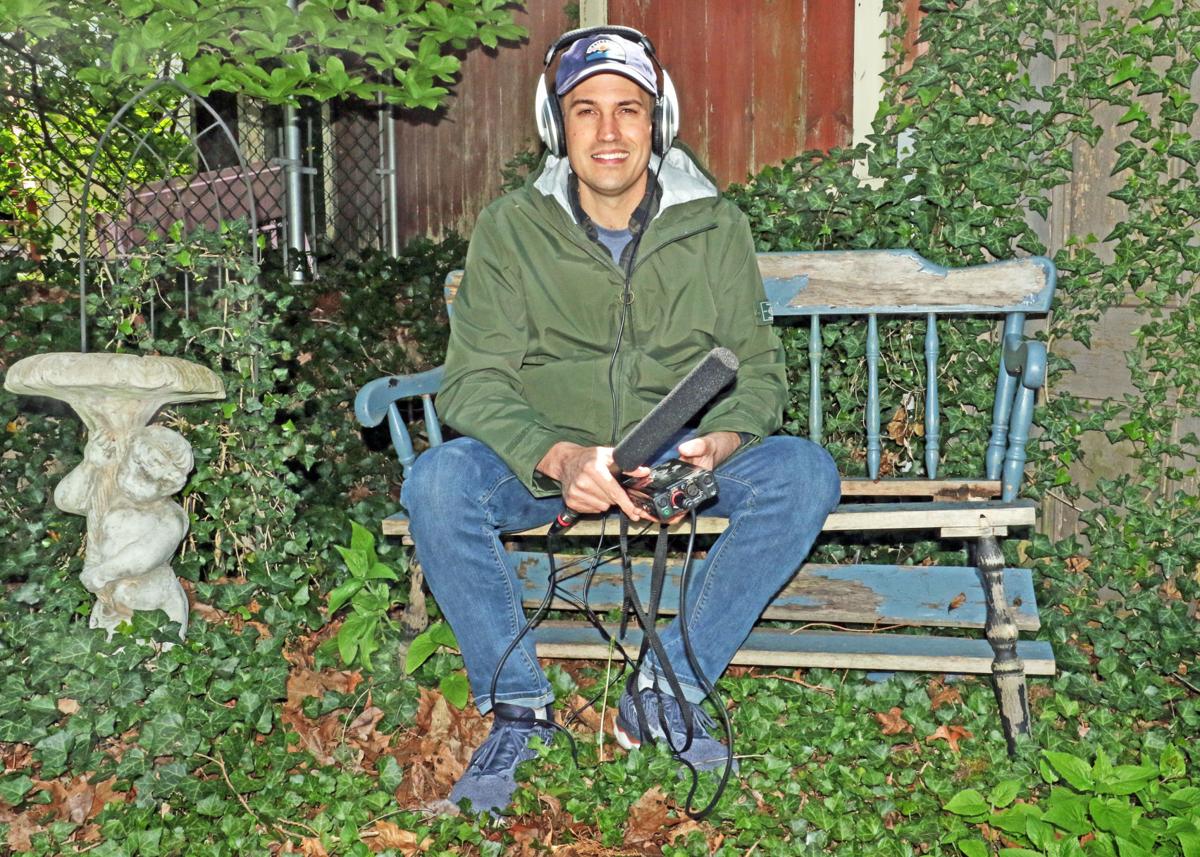 Alex Nunes, co-host of the podcast, Mosaic, records a variety of ambient sound in the backyard of his Westerly home on Tuesday, May 19, 2020. Harold Hanka, The Westerly Sun 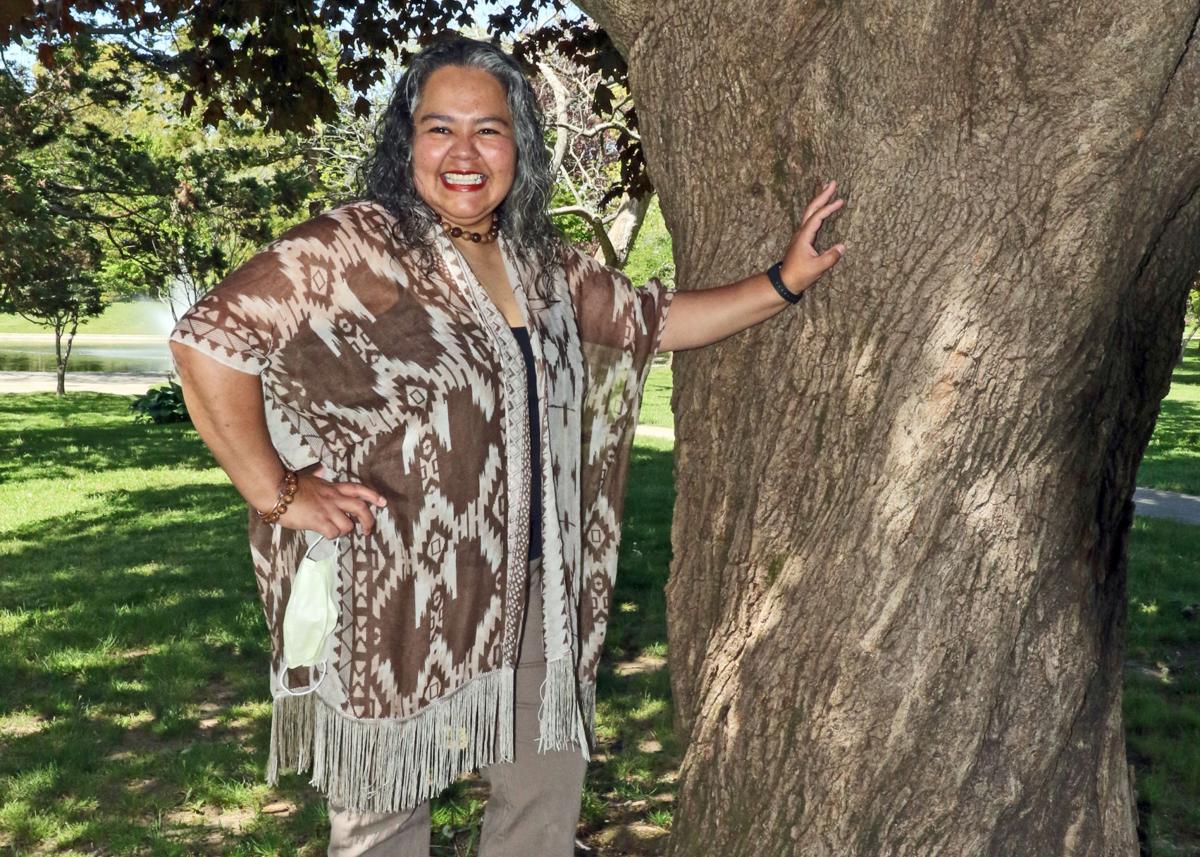 Estela Sarmiento of Westerly, one of the people featured in the Mosaic podcast on Friday morning, May 22, 2020. Harold Hanka, The Westerly Sun

Alex Nunes, co-host of the podcast, Mosaic, records a variety of ambient sound in the backyard of his Westerly home on Tuesday, May 19, 2020. Harold Hanka, The Westerly Sun

Estela Sarmiento of Westerly, one of the people featured in the Mosaic podcast on Friday morning, May 22, 2020. Harold Hanka, The Westerly Sun

WESTERLY — A 30-part podcast with several Westerly connections was honored recently with one of the most prestigious awards in broadcast and digital journalism.

"Mosaic," a series that tells stories of the local immigration experience and was produced by The Public's Radio, Rhode Island's NPR station, won an Edward R. Murrow Award, an honor reserved for news stories that "exemplify the importance and impact of journalism as a service to the community."

All the more impressive was the fact that "Mosaic" won the award — given by the Radio Television Digital News Foundation — in the "Large Market Radio" division, which includes Boston-based public radio powerhouses WGBH and WBUR.

"I didn't even realize we were in that category," said Nunes, the reporter for The Public Radio's South County bureau, with a chuckle. "I was surprised."

Nunes and his wife, Stacey Jackson, the director of the Annual Giving program at the Ocean Community YMCA, have two sons, Julian and Harrison. A Hartford native of Portuguese-American decent who grew up in Farmington, Conn., Nunes had worked in radio, was a college professor and was the news editor at The Sun before he joined the staff at The Public's Radio.

Nunes co-hosted the first season with Ana González, a Cranston resident and Brown graduate who was working at WHJY in Philadelphia before moving back to Rhode Island. She had been working on a documentary about the hip hop community in Rhode Island when she heard about the position at the Public's Radio to work on "Mosaic."

Sally Eisele, the station's chief content officer, directed the series and will continue to work with González on season two.

Malatia, who wrote the proposal to the Carnegie Foundation for the funding for "Mosaic," said in an email that Eisele, González and Nunes did a great job bringing the series to life.

Nunes said the essential idea for "Mosaic" was to tell the immigration story through the voices of immigrants "the voices of the people ... how they saw their stories."

The plan was to find "the under- and untold stories of immigration in Rhode Island and southeastern Massachusetts, and explore "why people left their homelands, what it’s like to adapt to a new country, and how immigration continues to shape our communities."

"We cast a wide net," Nunes said, "and we went into it very open-minded."

Shaping who we are

Nunes said he and González began by reaching out to college professors, historical societies and organizations that work with immigrant populations.

Literacy Volunteers of Washington County was one of the organizations they reached out to, and the way they connected with Kai On and Estela Sarmiento.

"Outside of Rhode Island, Westerly is probably known best for its beaches and five-star hotel suites," Nunes says in the intro to Episode 10, "Estela's Unexpected Journey." "But there’s more to it than that. I know, because I live here. The town also has a small but significant immigrant population."

"When Alex first approached one of our literacy specialists about talking with some of our students for the 'Mosaic' podcasts, we were thrilled," Mary Carol Kendzia, the executive director of the LVWC, said in an email. "There are so many interesting stories here among our students, each with its own unique set of circumstances."

"Immigration can be a contentious subject," she added, "but getting to know the people and their stories puts the issue in a very different light. Especially in Westerly and Rhode Island, the story of immigration shapes a large part of who we are as a community."

Kendzia said Sarmiento "was one of our most dedicated and dynamic students before she left for full-time work a few years back."

"Her accomplishments have been incredible, particularly considering the obstacles Alex looked at in the podcast," she added.

Sarmiento, who is bubbly and talkative, said she was happy to participate in the podcast and happy to have the chance to tell her story.

She came to the United States from Vera Cruz, Mexico, by chance, she tells González and Nunes in "Mosaic," and only planned to stay a couple of months. Nearly 15 years later, she lives here with her husband, Diego, and two children.

The mother of 14-year-old Jorge, an honors student, and 9-year-old Sofia, Sarmiento works in the registration department at the Westerly Hospital and owns a cleaning and painting business with her husband.

She said she is grateful to the staff at Literacy Volunteers, where she has been able to earn her GED and get certified as a food server and bartender. She misses Mexico, she said, and if she ever goes back she said she would teach English to young people. But her story and her situation is complicated.

"It's the kind of thing you don't talk about very often," she said. "People don't have any idea other people's stories ... everyone has a different one and I was very happy to have the opportunity to explain mine."

"The point is life is random. And immigration can be super-random," Nunes says in the episode. "People wind up in places by chance for reasons they could never have expected."

In Episode 17, "Fishing with Kai On," Nunes spends time with Westerly resident Kai On, a 67-year-old Chinese immigrant he met through Literacy Volunteers, where Kai On and his wife, Yau Mui, take English lessons.

Kai On and his wife moved to Westerly eight years ago from Hong Kong, Nunes said, because they wanted to be closer to their daughter and grandchildren. In Hong Kong, Kai On worked as a janitor for the housing department. Here, he has a job a few days a week at a local grocery store. When he’s not working, he likes to be fishing.

In the episode, Kai On takes Nunes fishing, shows him his home garden, plays his violin and invites Nunes to a party at his home where, Nunes said, "pork, duck, spare ribs, chicken wings, chicken legs, sea bass, sushi, salad, and all these different desserts I don’t recognize" were served.

Through a translator, Kai On tells Nunes that he "really appreciates that he landed in America, and the people in America are very friendly, and it’s very important for him at this age to do good things for other people, for his family and for society."

Kendzia said Kai On and Yau Mui have continued studying for their citizenship exams online — with assistance from the volunteer organization — since the pandemic began.

"Alex's podcast really captured so many of the talents this couple shares with the community," she said.

Through Lorén Spears, executive director at the Tomaquag Museum, Nunes said he learned about Samson Occom, the 18th-century Mohegan Indian from Connecticut who helped found Dartmouth College and the Brothertown Indian Nation.

"I flew to Wisconsin for that story," Nunes said.

González, who is of Puerto Rican descent, said while she enjoyed all the stories she worked on in season one, there are two that stand out. There was her Uber driver, Guillermo, a former heroin dealer from the Dominican Republic who lives in Providence and makes beats in his basement apartment.

"I understood his Caribbean-ness," she said.

Then there's the story of Congolese refugees, a family of eight children and a single mom.

"She was the most lovely person," she said, "and so were the children."

"Mosaic" also includes three episodes devoted to the "triple-decker" house, a story about the last Jewish bakery in Rhode Island, another about an immigrant from Senegal who teaches dance classes and another about Cape Verdean cranberry farmers. There are two about Gambian journalist Omar Bah, who was forced to flee his country after the government ordered a national manhunt for him, and now lives in Providence where he heads the Refugee Dream Center.

González, who will be the solo host of "Mosaic" for season two, said she is busy gathering stories and writing scripts and welcomes suggestions and tips. She can be reached at agonzalez@ripr.org.

She said she misses working with Nunes, his perspective, and his ability to find stories, but is happy he'll now be finding and telling more stories about southern Rhode Island and its people.

"He's a workhorse," she said with a laugh.

High winds leave tens of thousands without power in Northeast

Westerly man, 18, accused of sexual encounter with a minor