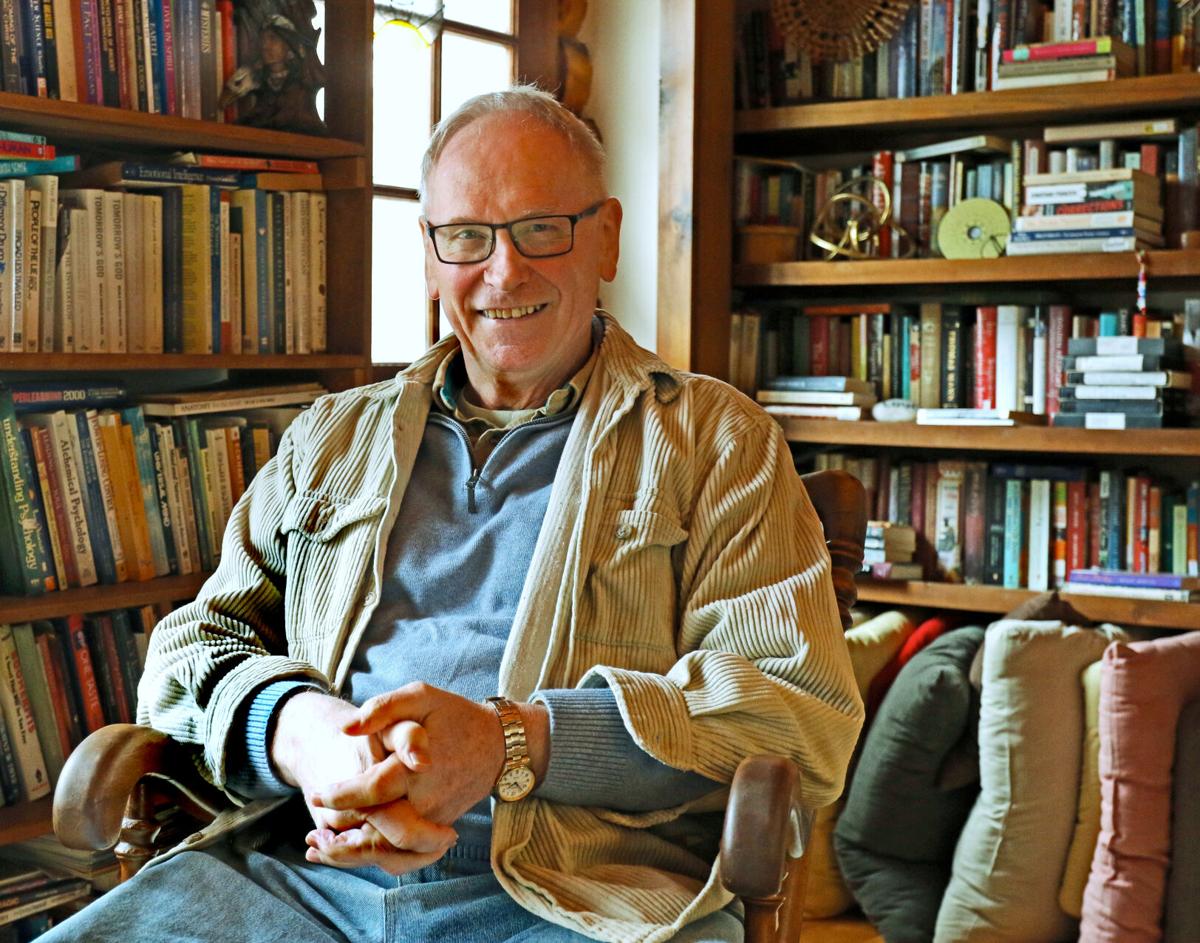 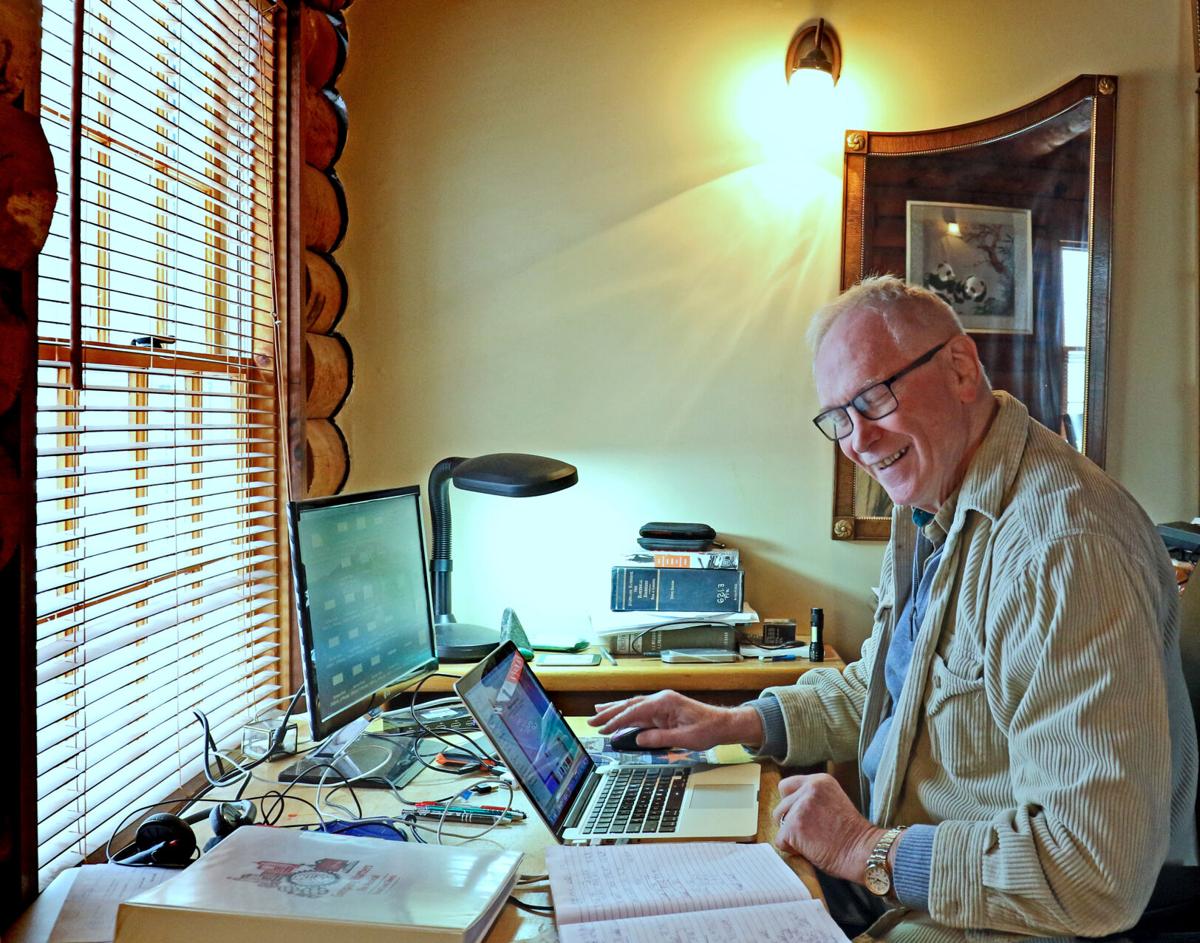 British playwright Malcolm Davidson reacts with a smile as he listens to a tune from his play at his Hope Valley home on Tuesday, February 23, 2021. 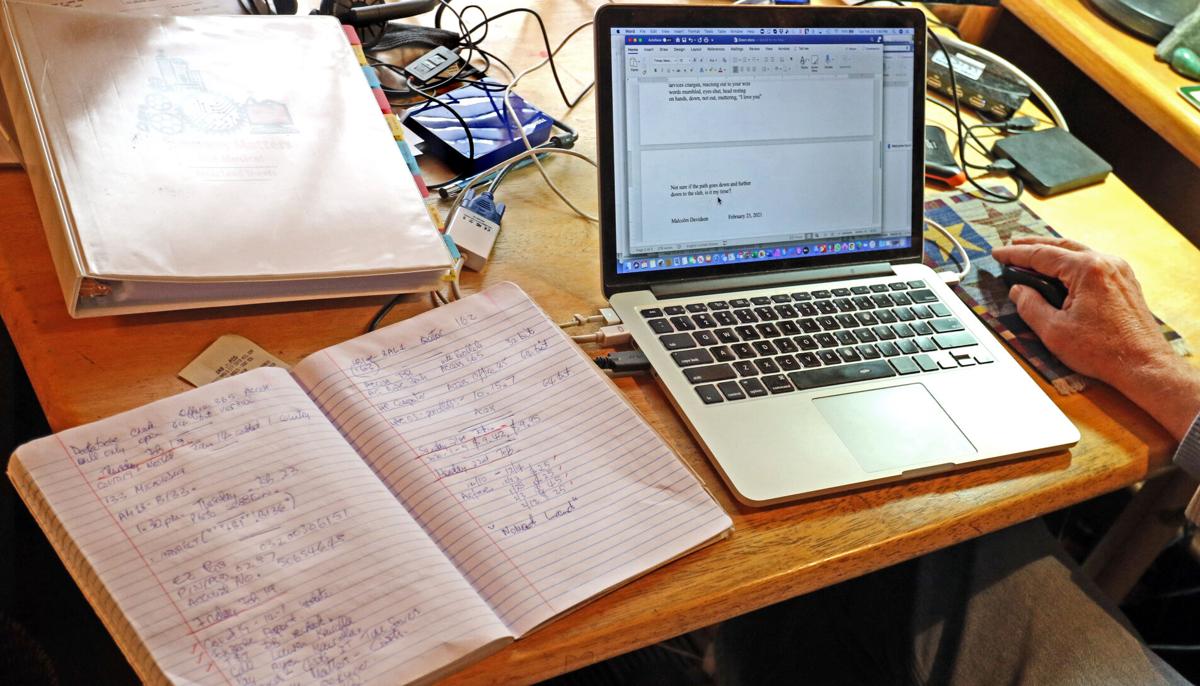 British playwright Malcolm Davidson reacts with a smile as he listens to a tune from his play at his Hope Valley home on Tuesday, February 23, 2021.

HOPKINTON — Malcolm Davidson may have begun working on his musical comedy back in the 1990s, but "Company Matters" seems more timely than ever today.

"It was prescient," said Davidson, a 71-year-old poet, playwright, quality control systems expert and COVID-19 survivor who recently returned from a multi-month stint aboard an oil rig in Qatar. "This was written long before Trump."

And it was written long before the coronavirus epidemic, when companies and businesses were able to profit from other people's misfortune, he said.

Davidson, whose two-act musical comedy is currently available for listening as an audio play, said while corporate corruption and greed may be central themes in "Company Matters," and the main character may be a corrupt and greedy golf-playing CEO, it is more "a story about people … about people who care for people."

And ultimately, he added, it's a story of victory … victory, connections and relationships.

"And it has a happy ending," he added brightly. Often, he said, the best way to get serious messages across is through comedy and humor.

Davidson, who was born in the United Kingdom — Newcastle upon Tyne to be precise — lived in Brooklyn and on Prudence Island before he and his wife, Cynthia, moved to Hope Valley seven years ago.

A published poet who is active with several local poetry groups, Davidson said he began writing his musical as part of a cathartic process.

It was while working for Sony Music in New York City decades ago that "Company Matters" began to take shape, Davidson recalled one day last week.

"Over the years, I had observed people at the top of the socio-economic pyramid," he explained. "In the workplace, I'd often see the big man at the top yelling at his staff and bullying to get things done."

"Sort of the same way Trump bullies," he added.

While the head honcho is focused on the "bottom line," he said, he has no qualms about yelling at his staff and making them feel miserable.

As he thought about his characters, he said, the lyrics and lines came to him.

Davidson said his characters — which include a Pushy Boss (JP Pugsley;) the Banker; Frank, the sycophant; a married couple; Marlene the Office Manager; a Yes Man and the Office Clown — are archetypes, and that a number of storylines are woven into the over-arching story.

Issues such as drug addiction, the father-son relationship and employee exploitation are explored in the comedy, he said, with songs to accompany each issue.

The songs are written in a variety of musical genres, Davidson said, from country to blues and from rap to spirituals.

In "Backplane Boogie," he said, the workers who "do all the behind-the-scenes things" are honored.

"I wanted to make sure to validate the experience of workers," he said. "I wanted the people who do the work to know, 'You are not alone. We understand.'"

The song, "Did you Ever Think," sort of sums up his own personal beliefs, he said.

"I feel the right way to get things done is through collaboration," said Davidson. "Cooperation and collaboration."

"We all have our feminine sides and our masculine sides," he said, "We are all a mixture of male and female energies."

Collaboration, cooperation and empathy are seen as more feminine traits, he said, while brutish, "Tarzan-like" behavior is seen as masculine.

For too long now, he explained, our masculine sides have been dominant, something that has led to toxic behaviors and systems.

The days of the lone warrior are over and the era of empathy has arrived, he said.

"Our natural evolution hasn't quite caught up with us," he said. "But our society has changed."

These philosophies are threaded through the musical, Davidson said.

Back in 2003, Davidson said, friends helped him arrange for a staged reading of "Company Matters" at the Repertory Theater of New Britain with actors from Drama Works of Northampton. Four performances of the play were staged.

"It was very well-received," he said. "We found some great musicians, and we had a fun weekend."

After some tweaking, and after he and his wife worked together, singing the songs aloud and editing them, he thought it was time to take the next step.

Eventually, he connected with Miami-based producer Lauren Kairalla who agreed to help him promote the musical.

"It's very relevant," said Kairalla Friday about "Company Matters." "It really needs to be shared."

"It's also been a lot of fun," added Kairalla, who performs the part of Marlene in the audio production. "Malcolm is wonderful. He has been so grateful and so appreciative."

"And he's an insanely good cheerleader," she added enthusiastically. "And it's been an absolute pleasure to collaborate with him."

"I can close my eyes and see it on stage," Kairalla said.

"I can see it with a good set and good choreography," said Davidson, who hopes his musical will be fully produced and staged one day, post-pandemic.

Ideally, he said, he'd like to see "Company Matters" performed all over the world, and in all of the major American cities.

A tall order,  perhaps, but better to dream big than small, he said. "I know it will happen when it is meant to happen."

Parts of "Company Matters" are available at companymatters-themusical.com

Athlete of the Week: May 1st

Sponsored by Antonino Auto Group: For the remainder of the school year, The Westerly Sun will be selecting a high school Athlete of the Week. Voting closes on Tuesday at 9am and the selection will be announced on Thursday. The nominees for the week ending May 1 are as follows:

Boston's iconic Swan Boats return after a year off

In the Easy Chair with Paula Glen

Planning board approves demolition of 5 buildings in Newport