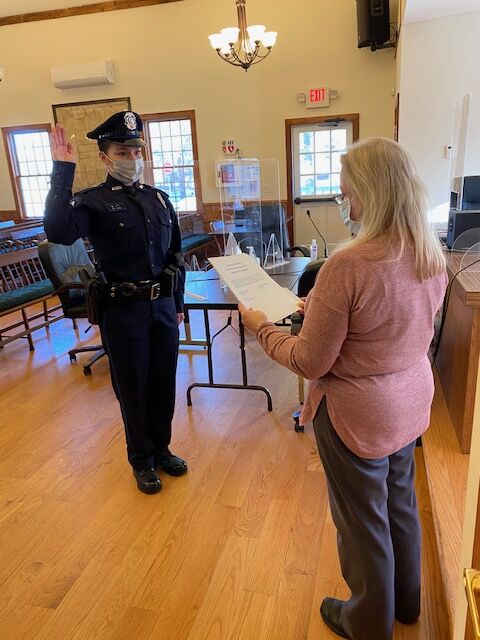 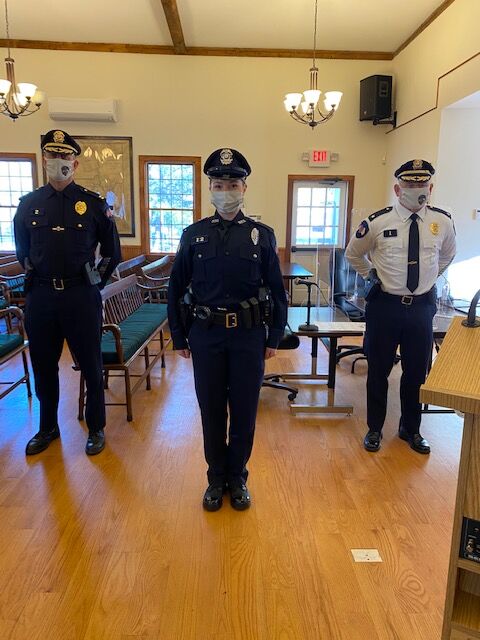 Just one day after graduating from the 135th session of the Rhode Island Municipal Police Academy, the 25-year-old former Richmond Department of Public Works employee and her classmates delivered a check for nearly $2,000 to the nonprofit organization Matthew's Wish to help purchase holiday gifts for those in need in South County. The recruits also participated in a cruiser convoy and toy parade that spanned from the University of Rhode Island to the Rhode Island Center Assisting Those in Need in Charlestown.

And all that occurred before she was even sworn in as the newest member of the Hopkinton Police Department on Dec. 15.

"Officer Carpenter was an exceptional candidate from the very beginning of the hiring process, and it's not surprising for us to see her hit the ground running," Hopkinton Police Capt. Mark Carrier said. "She excelled on every aspect of testing, from written and oral to the physical tests, and was easily the best choice for the department."

Carpenter, a lifelong Charlestown resident, was hired as the department looked to bolster staffing amidst the COVID-19 pandemic. A six-year volunteer with the Richmond-Carolina Fire District, she said recently that the opportunity was the next step in what she hopes will become a long career as a first responder.

A 2013 graduate of Chariho High School, she said serving as an officer was something that she has wanted to do since she was a young child, and her recent experience in the academy and training with Detective John Forbes only strengthened her resolve to pursue a career in law enforcement.

The opportunity for Carpenter came earlier in 2020 when she said she learned about the job opening and, after speaking with her boss, Richmond DPW Director Scott W. Barber, he encouraged her to chase her dreams.

"I enjoyed working in Richmond, but it was never my goal to be part of a highway crew. I wanted something more," Carpenter said. "Scott told me that if it was my dream, it was important that I went for it."

She said Barber, who has also served as fire chief during her time with the Richmond Carolina Fire District, encouraged her throughout the process. Carpenter said she has also received "incredible support" from her family and new husband, Brett Gough, who tied the knot with Carpenter in September.

Carrier said Carpenter is now breaking barriers as one of only a few women to serve the community as a sworn officer — he noted that the department chose her because of her abilities, not her status as a woman — but added that he has no concerns that she'll fit in. He said she has "a different makeup" that will allow her to not only survive, but even thrive in a career that has been dominated by males until recent years.

"With time, we don't just expect her to adjust but to excel in her role as an officer," Carrier said. "She wasn't just the top candidate among female applicants; she was the top candidate, period. We look forward to seeing what she can do as a member of our team."