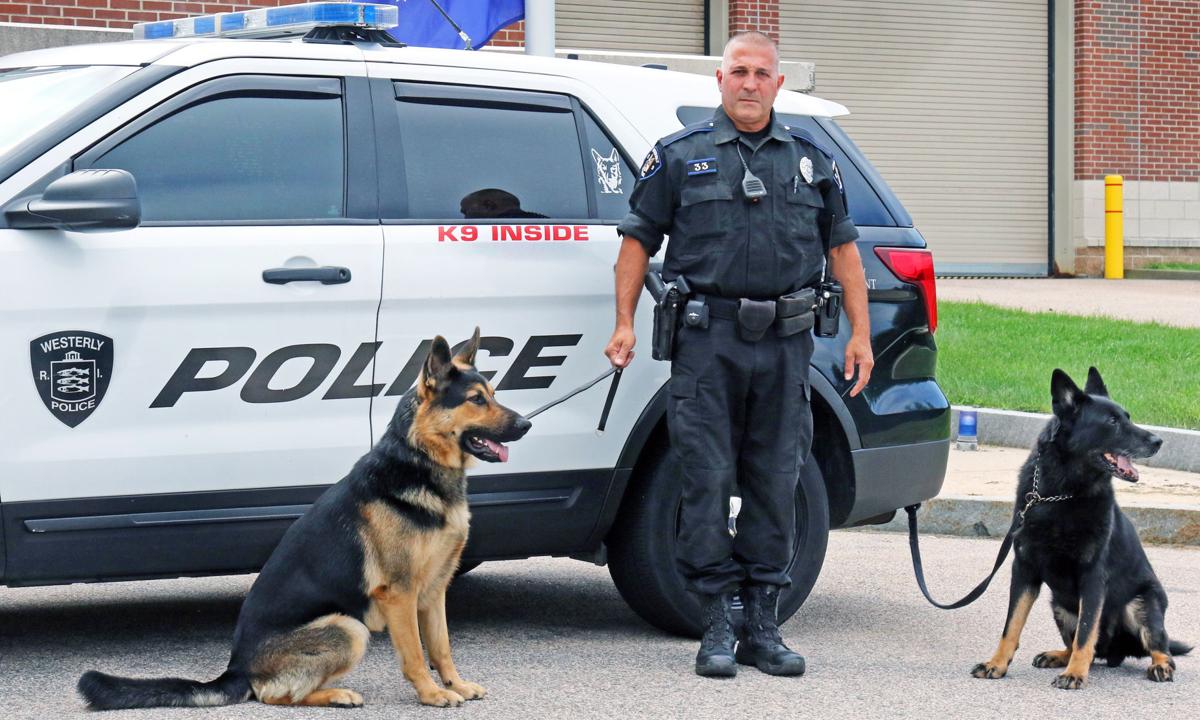 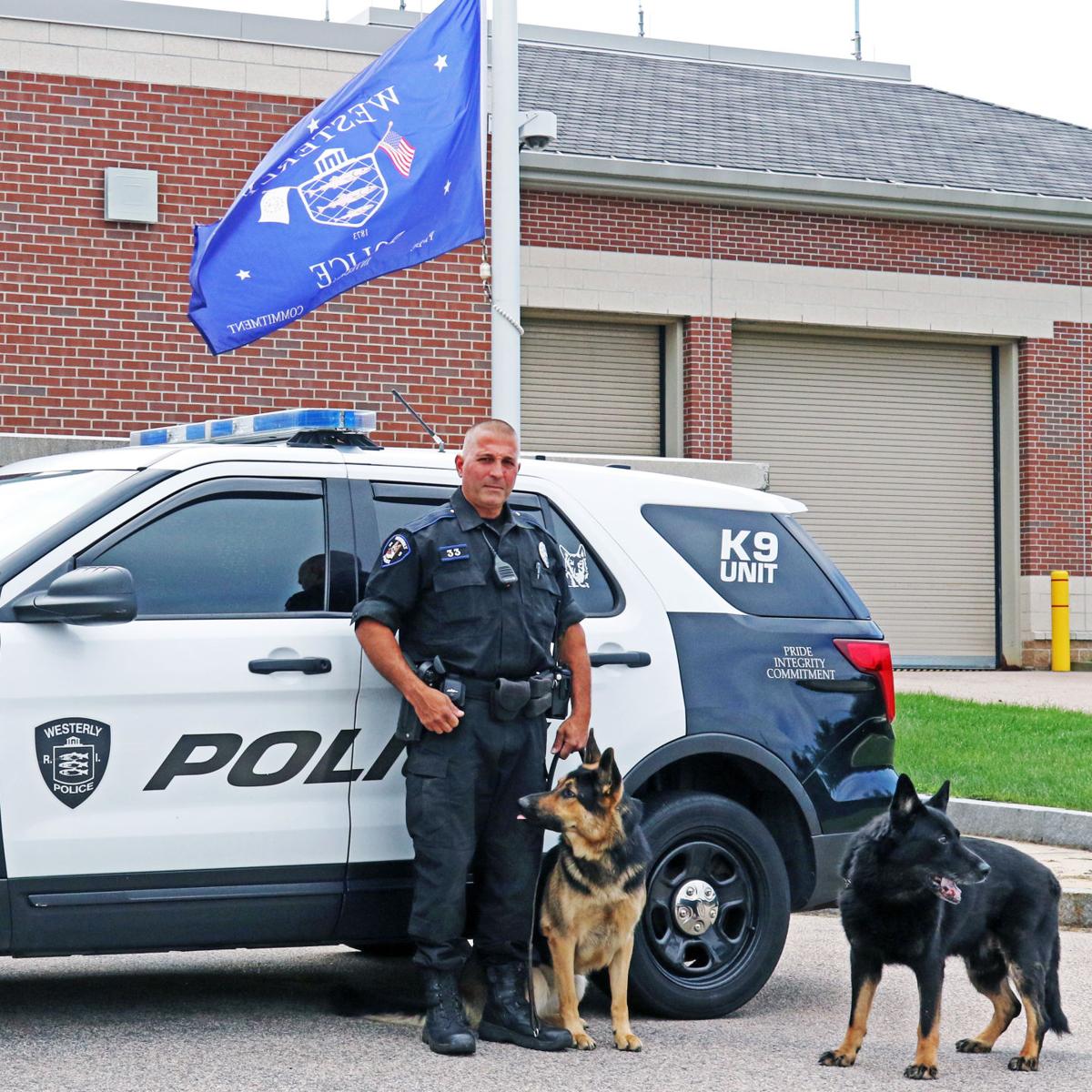 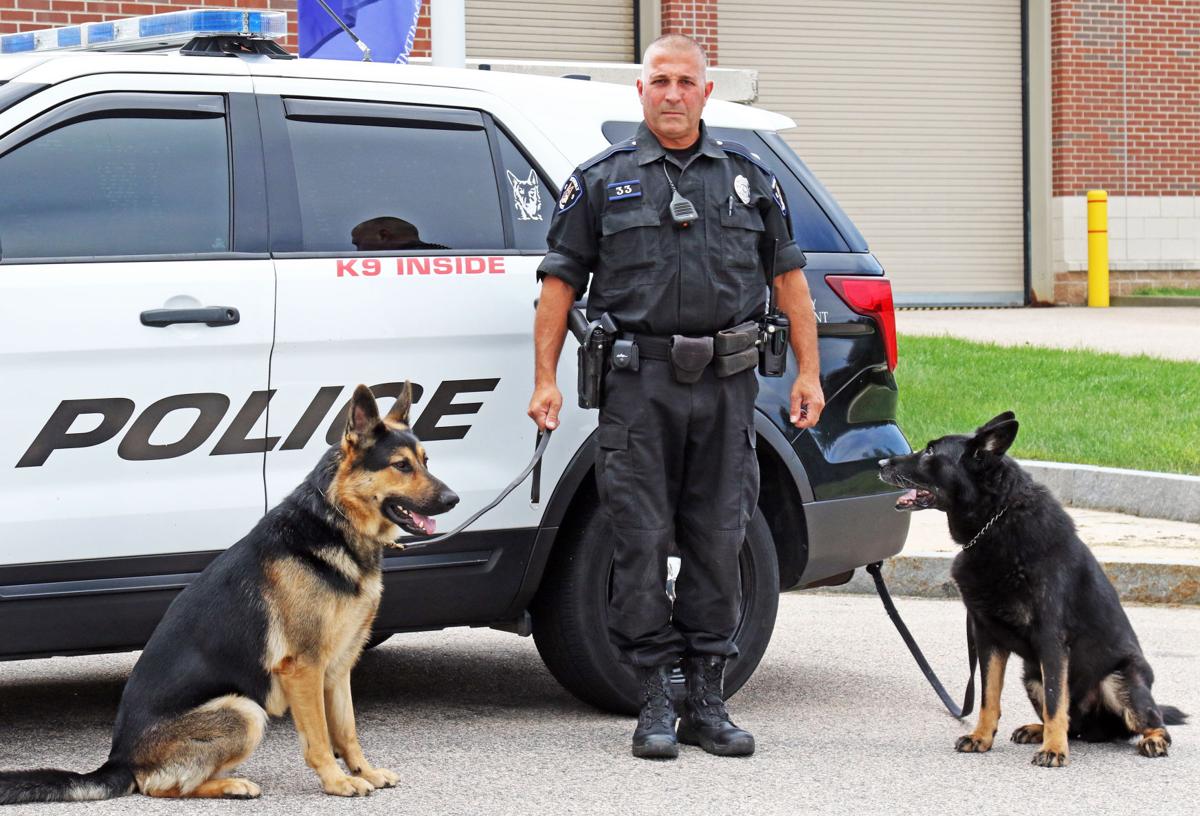 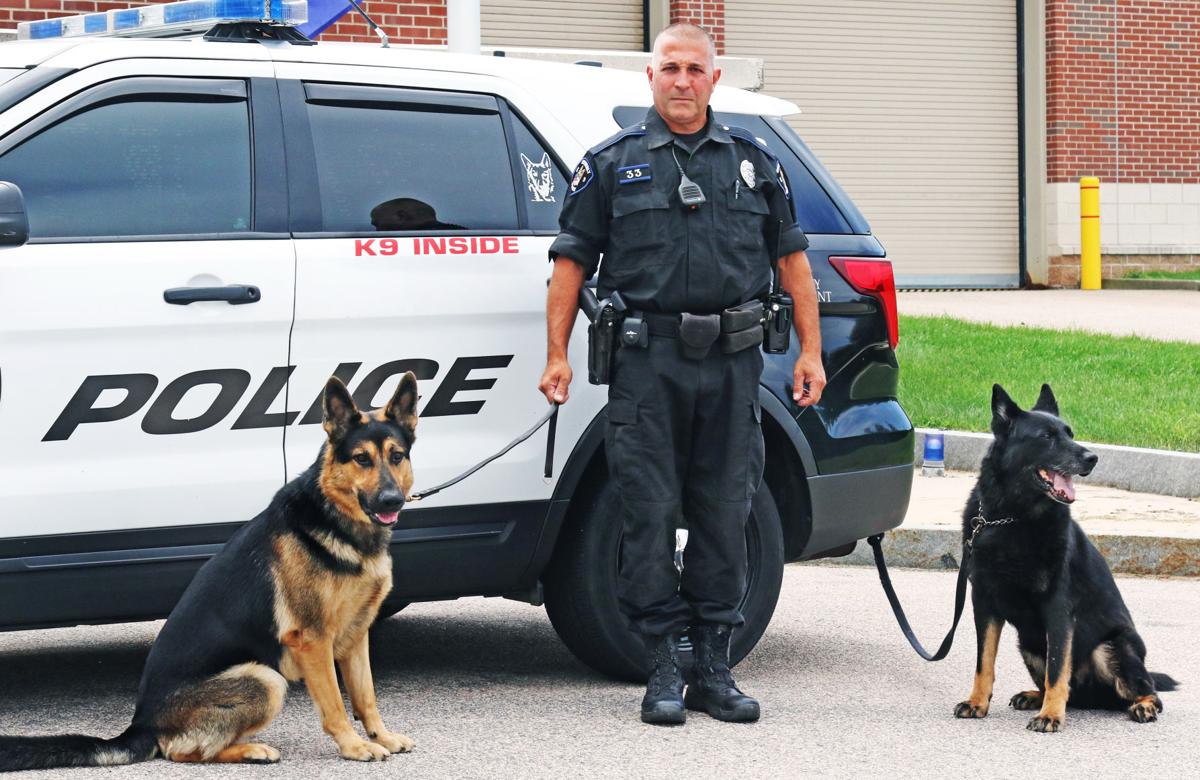 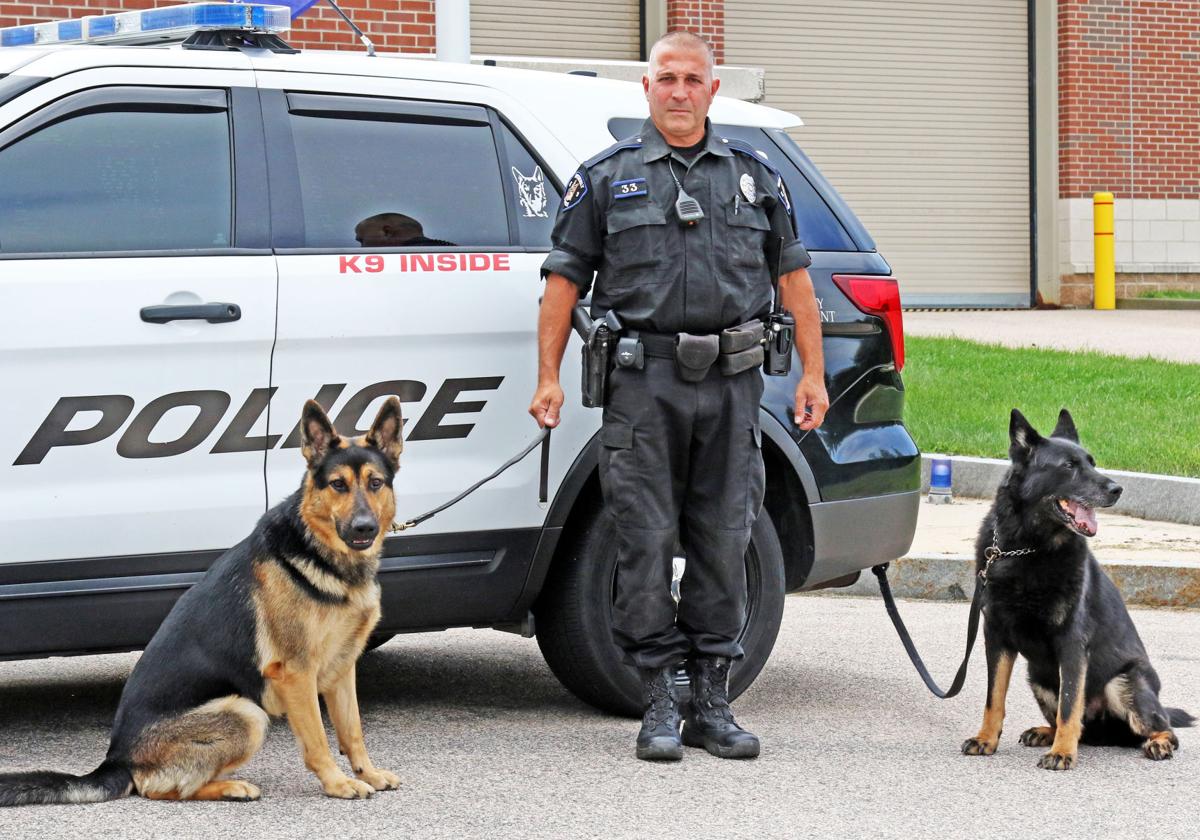 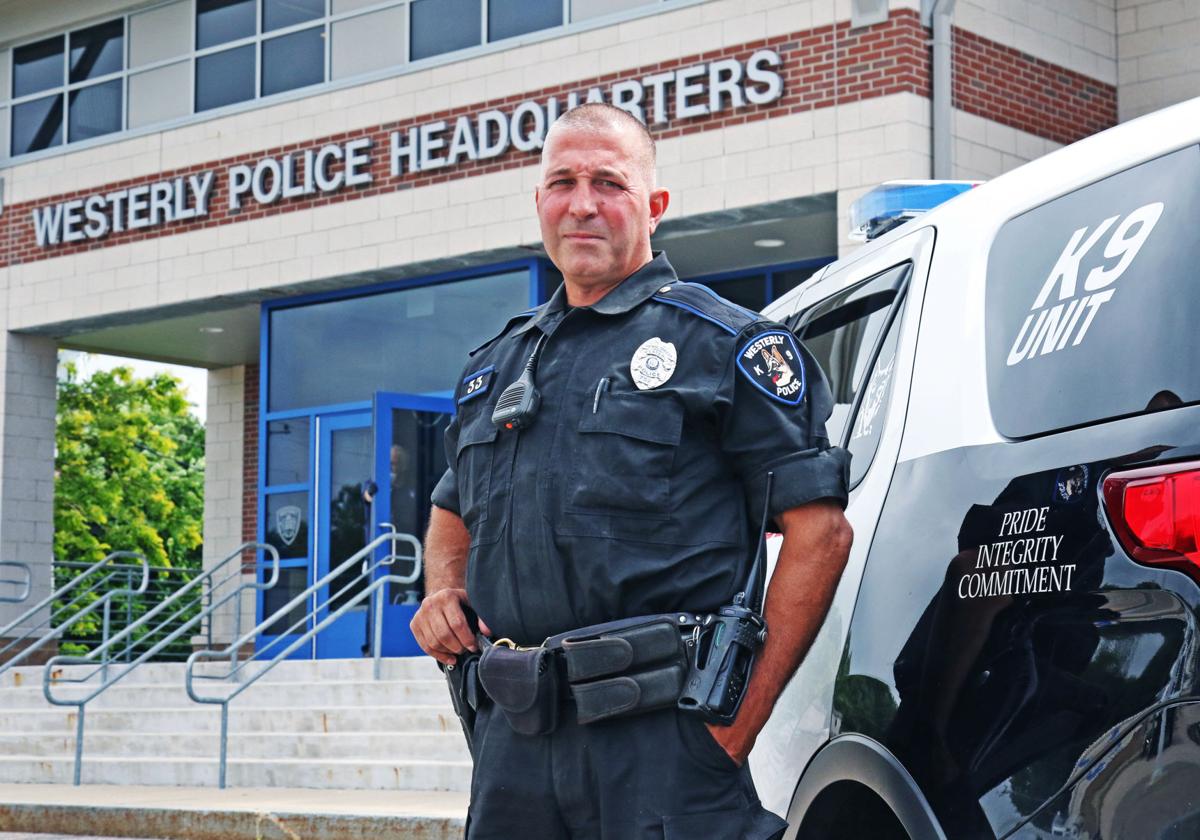 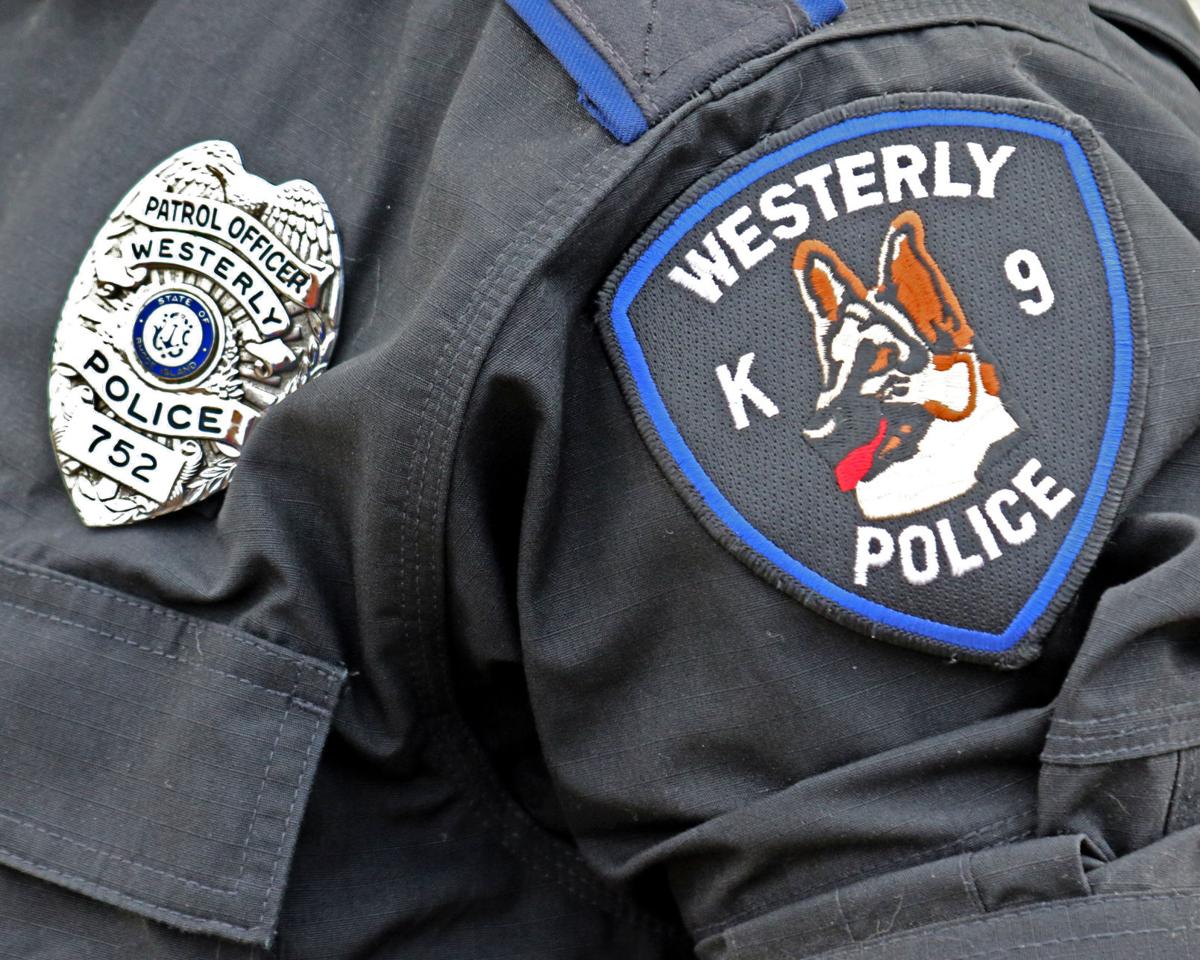 WESTERLY — For more than a decade, K-9 Sipko provided quality police dog services to the Westerly Police Department. Now K-9 Primo is hoping to pick up right where his father left off.

It has been a busy few months for the dogs’ handler, Officer Tim Manfredi, who recently retired his partner of nearly 12 years, Sipko, and has helped to train and bring his son, Primo, on board to serve as his new partner. Sipko will continue to live with Manfredi.

It’s been a bittersweet transition for the 19-year veteran of the department, Manfredi said last week, as Sipko still shows an interest in joining Manfredi and Primo at work everyday.

“When I head out in the morning, they both race each other to the door. Primo now joins me, but Sipko isn’t giving up and he wants to come to,” Manfredi said. “It’s tough to see; it does hurt to have to leave him home like that.”

Sipko, now almost 13 years old, was retired from service earlier this year after nearly 12 years with the agency, and Manfredi said Spiko’s resume speaks for itself.

The accomplished Czech German Shepherd, who worked nearly four years longer than the average seven-year career of a police K-9, joined the department on active duty in 2008 and was involved in hundreds of response calls that ranged from drug searches and suspect tracks to locating missing people. He was responsible for seizing thousands in drugs and cash obtained through the illegal narcotics sales, has located numerous suspects wanted for everything from disputes to violent offenses and rescued several missing people.

Manfredi said there are a number of cases that stand out. In 2013, Sipko assisted in a traffic stop that led the department to arrest a California man who was a known drug trafficker. During the stop, Sipko hit on a portion of the car that ultimately led officers to find more than $106,000 that was later surrendered to the state.

In a 2014 case, Sipko’s nose once again made him a hero by locating a missing elderly woman in Pawcatuck. Manfredi and Sipko were called to the community on a cold March night to assist Stonington police in finding the woman, who suffered from Alzheimer’s disease and had wandered into a wooded area. The woman was not properly dressed to withstand the elements.

Manfredi said Sipko was relentless that night, following the scent and eventually leading police to the missing woman after a perimeter search conducted by human officers was unsuccessful. If not for the timely response and strong work by Sipko, Manfredi said the woman was at risk of dying.

“How do you quantify that? You can’t put a value on rescuing an elderly woman lost in the woods,” Manfredi said.

These calls were just a few of the many examples of success that Sipko had with the department, Westerly Police Chief Shawn Lacey said, and it’s what led Manfredi and Westerly police to come to an agreement a few years ago to breed Sipko and pass on his genetics.

Lacey said Manfredi, who he described as an extremely dedicated employee who has often gone above the call of duty, had approached the department and notified them that he was interested in breeding Sipko with a female German Shepherd that he had obtained. As part of the agreement, Lacey said Manfredi offered the pick of the litter to the agency at no cost to serve as Sipko’s replacement.

“A new dog can cost in the range of $7,000; in this case, we didn’t pay anything,” Lacey said. “Manfredi sought permission before considering it, and we took advantage of his offer.”

In that, the department was able to tap into Sipko’s genetic code and save money all at the same time. After the dogs began to develop, both Manfredi and Lacey said it was clear that Primo was a promising young recruit who exhibited many of the traits that had made his father so successful.

Lacey said the agency paid for 12 weeks of training, a cost that would have come with purchasing another dog as well, and in his first few weeks with the department, Primo has not disappointed.

During his first week on the job, the 2-year-old rookie already logged his first successful track and has shown a real talent with his nose. He had already earned certification in search and rescue response, suspect tracking, and aggression control and apprehension. In the coming weeks, he is expected to complete work to become a drug sniffing dog as well.

Manfredi said while he wasn’t happy to retire Sipko, he is certainly happy to have his son now joining him and expects great things from his new partner.

“I’m glad the department has given me the opportunity to work with another dog,” he said. “Being a K-9 handler, it’s a career where you are learning on the job. I feel like I can build on my experience with Sipko and that (Primo and I) will be even better the second time around.”

With the addition of Primo, Lacey said the department is now back to the two dog K-9 unit that has served the community for the better part of two decades now. In addition to Primo and Manfredi, the agency also has the services of K-9 Niko and his handler, Officer Brian Bruno.

Lacey said the agency isn’t prepared to rest on its laurels, however, and said he is seeking to use money raised at a recent fundraiser at the Knickerbocker Music Center to purchase a third K-9 for the department. Such a dog would be used more specifically as a bomb recognition and firearms expert.

He said such a start-up cost can be overwhelming, but that with changes in security needs and requirements that a dog be available at large events such as Westerly High School graduation, the new K-9 would pay for itself in no time.

“You cannot overstate the value of these dogs to our department. They are a major asset that have helped us in so many ways already and I expect that will be the case well into the future,” Lacey said. “Every penny we’ve spent, it’s all been worth it.”