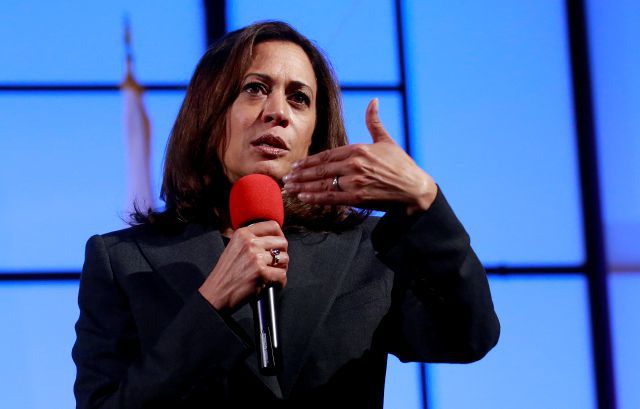 WASHINGTON — When an audience member at a town hall asked California Sen. Kamala Harris earlier this year to reject corporate donations, her answer was noncommittal. “Well, that depends,” she said.

Harris wouldn’t be wrong twice: Less than a month later, she reversed herself, telling a radio show that she’d no longer accept checks from corporate political action committees. “Money has now really tipped the balance between an individual having equal power in an election to a corporation,” Harris said on “The Breakfast Club,” a program on a New York radio station.

Money in politics is emerging as a new litmus test for Democratic candidates. In ads, stump speeches and debates, scores of politicians are pledging to reject corporate PAC donations. Their ranks include a handful of Democrats, including Harris, who are widely thought to be exploring presidential bids: New Jersey Sen. Cory Booker, New York Sen. Kirsten Gillibrand and Massachusetts Sen. Elizabeth Warren. Joining them is Vermont’s independent senator, Bernie Sanders.

More than federal 170 candidates have said they’re not accepting corporate PAC donations, according to a tally by the group End Citizens United, a political action committee.

The groundswell of opposition to corporate PACs has developed quickly as Democrats aim to tap into the anti-establishment sentiment that President Donald Trump successfully harnessed in 2016. When Rep. Ro Khanna, D-Calif., started the “NO PAC Caucus” in July 2017, only two members joined his cause — Rep. Beto O’Rourke, who’s now challenging Sen. Ted Cruz in Texas, and Democratic Rep. Jared Polis, the party’s gubernatorial nominee in Colorado. But now, said Khanna, “it has really caught people’s imagination across the country.”

The pledge may be more symbolic than financial: In a world of dark money and super PACs, corporate donations make up only a small percentage of the dollars flooding the political system. “Corporate PACs making contributions is not where the major campaign finance action is these days,” said Rick Hasen, an election law expert at the University of California at Irvine. “If you asked me to name the top 10 things wrong with campaign finance, I’m not sure corporate PAC money would be among them.”

Democrats have had a complicated relationship with corporate cash since Citizens United, the  2010 Supreme Court ruling that cleared the way for anonymous corporate donations. While the party railed against the ruling, most Democrats have continued to court wealthy liberal donors and big business.

But the 2016 presidential election showed that voter frustration with influence of money in politics may have become a powerful force in politics. Trump tapped into anger with a “rigged system,” as did Sanders. While he and Hillary Clinton largely shared policies on regulating money in politics, advocates argue that Sanders’ long-standing policy of rejecting corporate donations helped him own the issue.

Nearly all Americans — 96 percent — blamed money in politics as a cause for some or a lot of the dysfunction in the U.S. political system, according to a Washington Post-University of Maryland poll conducted last October.

The no-corporate PAC pledge is a fairly cheap way for candidates to signal their campaign finance bona fides, particularly for challengers who tend to get less from those groups. Corporate PACs are committees largely funded by individual employee contributions — not the company itself — and have a $5,000 per candidate, per election limit.

Only a dozen candidates have rejected all PAC money, according to End Citizens United, meaning that the vast majority still accept donations from leadership, labor union and special interest group PACs. They don’t plan to return corporate contribution or reject the support of super PACs, which can raise and spend unlimited amounts to help candidates.

In the second quarter of 2018, 32 of the Democratic candidates taking the pledge outraised their incumbent opponents, according to End Citizens United.

“It’s a smart political move,” says Trevor Potter, a former Republican chairman of the Federal Election Commission who has criticized the Citizens United ruling. “You’re not giving up much by forswearing PAC contributions and you are able to make the political point that you are opposed to the Washington influence buying system.”

For senators, corporate PACs make up a relatively small amount of their total fundraising. Harris, who won her first term in 2016, has raised nearly $19.7 million. Only about $900,000, or 4.59 percent, came from PAC contributions, according to the Center for Responsive Politics, a nonpartisan research group.

“I just have come to the realization over time that as long as the Republicans are in charge, they’re not going to move forward with any of the significant campaign finance reform,” he said. “Maybe this is a small way, on your own, to make a difference.”

The issue has gained traction in part due to the work of organizations like End Citizens United, a Democratic advocacy group that formed in 2015. It’s running $4 million in television ads attacking Republican candidates in Montana and Nevada for accepting corporate donations. The group argues that every dollar matters in close races: Democratic congressional candidates typically lose about $20,000 in donations and senators about a million dollars, according to the group.

“But this isn’t just about dollar amounts,” says Tiffany Muller, the president of End Citizens United. “This is about taking action to show voters that you’re on their side.”

Republicans, too, see new opportunities in the no-PAC push. On Monday, Cruz attacked O’Rourke for accepting contributions collected by a political action committee that backs candidates who support a two-state solution in the Israel-Palestinian conflict.

“Rep. Robert ‘Beto’ O’Rourke travels all over Texas claiming that PACs are corrupt, and he’s made his alleged rejection of PAC influence a cornerstone of his campaign,” said Cruz campaign spokeswoman Emily Miller. “But now we know that O’Rourke’s actions have not matched his words.”

O’Rourke’s campaign said the PAC did not contribute directly to his campaign but bundled hundreds of individual contributions. “What is important to know is that no special interests, no political action committee, no corporation has the ability to purchase influence or access,” he told reporters at a town hall on Monday evening.