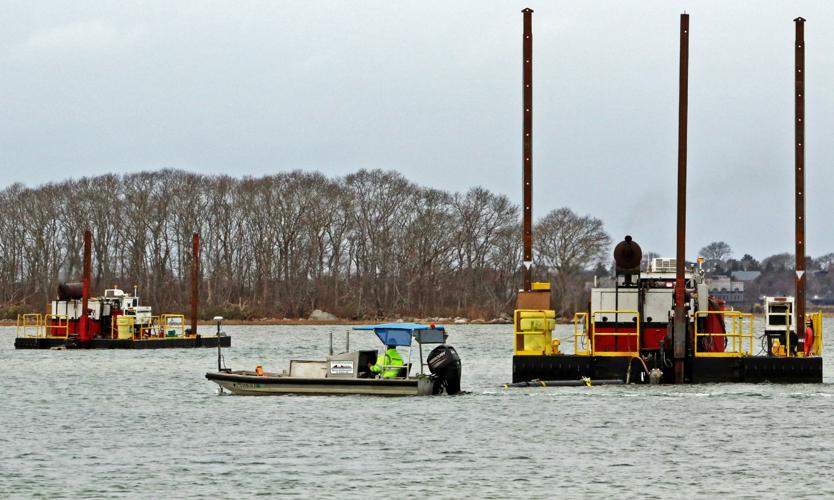 Dredging at Quonochontaug Pond started this month near the boat launch and near the mouth of the breachway. The project is aimed at improving water quality and navigation, restoring the marsh, improving habitat, and building up a small beach for recreation. Harold Hanka, The Westerly Sun, Thursday, Dec. 13, 2018 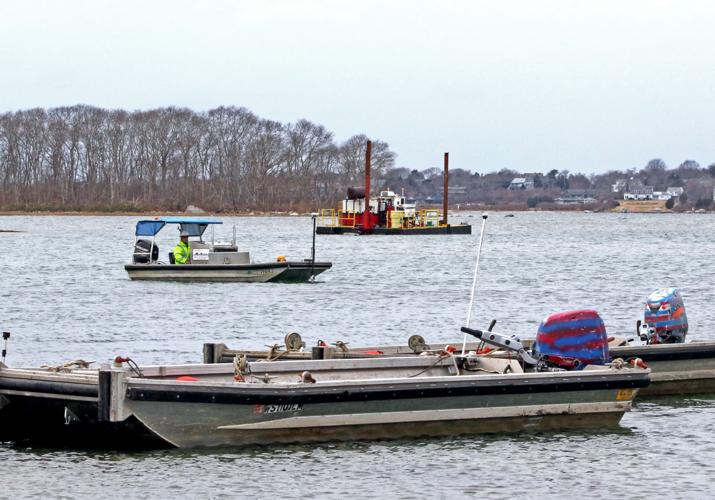 The dredging project at Quonochontaug Pond State starting near the boat launch and near the mouth of the breachway was underway on Thursday, December 13, 2018. Harold Hanka, The Westerly Sun

Dredging at Quonochontaug Pond started this month near the boat launch and near the mouth of the breachway. The project is aimed at improving water quality and navigation, restoring the marsh, improving habitat, and building up a small beach for recreation. Harold Hanka, The Westerly Sun, Thursday, Dec. 13, 2018

The dredging project at Quonochontaug Pond State starting near the boat launch and near the mouth of the breachway was underway on Thursday, December 13, 2018. Harold Hanka, The Westerly Sun

CHARLESTOWN — For the first time since the construction of the breachway in 1904, the Quonochontaugsalt pond, which straddles Charlestown and Westerly, is being dredged.

The equipment was delivered on Dec. 7 and the work, which is being done by J.F. Brennan Inc. of Lacrosse, Wisconsin, began Dec. 10 and is continuing 24 hours a day, six days a week. It is expected to be completed by the end of January, well before mid-February when the winter flounder spawning season begins. No dredging is allowed at that time.

“They’re going to be dredging the breachway, and then they’re going to  be doing another east-west channel for dredged material, to improve the depth there to be optimal for eelgrass growth,” she said. “To the east of the breachway, there’s a small barrier spit that will be restored with grass. It will kind of act as a small beach for recreational purposes. Historically, it was used as such and was a little strip of beach, but it is now submerged quite often.”

The project is expected to cost about $2 million. A federal Coastal Resilience grant from the National Oceanic and Atmospheric Administration is providing $980,000, and the towns of Westerly and Charlestown, the Shelter Harbor Conservation Society and the Salt Ponds Coalition are contributing matching funds.

CRMC Policy Analyst Caitlin Chafee is overseeing the project, whose partners include NOAA, the U.S. Fish and Wildlife Service, Save The Bay, and the Rhode Island Department of Environmental Management.

“Folks have been advocating for it for years,” Chafee said. “I think people see it as a water quality issue, so there’s a lot of folks who wanted to do it to do it to improve water circulation. Navigation is a big part of it. There’s a lot of shoaling going on in that main channel area.”

This project follows a similar dredging initiative at Ninigret Pond, also done by J.F. Brennan, in which the dredged material was used to elevate that salt marsh.

“The goals of our project are to get material so that we can do a marsh restoration, so we’re doing about 30 acres of marsh elevation enhancement and then part of the dredging that we do will be for eelgrass bed restoration, so it’ll be dredging to a shallower depth that’s suitable for eelgrass,” Chafee said. “The hope is that we’ll improve the east-west circulation in the pond that may have a beneficial impact on water quality.”

The work must be performed quickly in the winter, because the water can freeze and block the pipes. “Once that water starts moving through the pipes, you don’t want to leave them idle," Chafee said. "They’ll freeze. So the dredges, it’s really most efficient to have them run continuously.”

As sand is dredged from the pond bottom, it is immediately spread on the surface of the marsh with a low-impact bulldozer.

“As they go, when the material is pumped onto the marsh, they’ve been spreading it and grading it with this low ground pressure bulldozer … It’s fitted with a GPS unit, so basically they load the design into the machine and it knows how to raise and lower the blade to get the grade that we want,” Chafee said. “It’s really efficient, so the operator’s not trying to look at stakes.”

Wenley Ferguson, Save The Bay restoration director, whose most recent collaboration with CRMC was at the Ninigret marsh,  will oversee the work to restore the hydrology of the Quonnie salt marsh. In the spring, she and a group of volunteers will begin replanting the newly deposited sediment.

“We applied some of the lessons learned from the Ninigret project into this design,” Ferguson said. “Just like at Ninigret, we will be implementing partial restoration in the sense that we’ll be restoring the hydrology by excavating creeks and runnels just like we did at Ninigret, using the state’s low ground pressure excavator, and once we’ve done that, we’ll go in in the spring and do some planting.”

Ferguson said her work would begin once the basic grading of the dredged sediment is complete.

“After Brennan, the contractor, has gotten the rough grades done, we’ll go in and install the creeks and by then we’ll have pretty much dewatered fully and then we can come in, probably in the May time frame, and do the salt marsh planting.”

Ferguson said that one of the most exciting elements of the Quonnie project is the restoration of the small sand spit near the parking lot, because it will add a recreational component to the habitat restoration work.

“It’s basically eroding away, and we’re going to build that up with sand and create a little sand beach,” she said. “The high point will be planted with beach grass and salt tolerant shrubs, and as it extends eastward into the pond, it’ll have salt marsh vegetation. So, a component of the project is really to improve and enhance public access to the pond, because that’s a place where people will recreate with their kids.”

The state boat launch will be accessible during the dredging, and Chafee said there had been plenty of interested spectators watching from shore.

“According to the crew, they’ve had a steady stream of visitors,” she said. “I think people are curious, which is fine. The crew’s been instructed to keep the area open to public access, so the site is pretty well-maintained. They’re not blocking off the boat ramp or anything like that."

PHOTOS: Koi building in downtown Westerly gets a fresh coat of paint

In the Easy Chair with Jenna Hetzell

In My Own Shoes: Button-down Uncle Sid meets the barbecue

Postscripts: Mystic dentist had a connection to 1 of Norman Rockwell’s famous covers