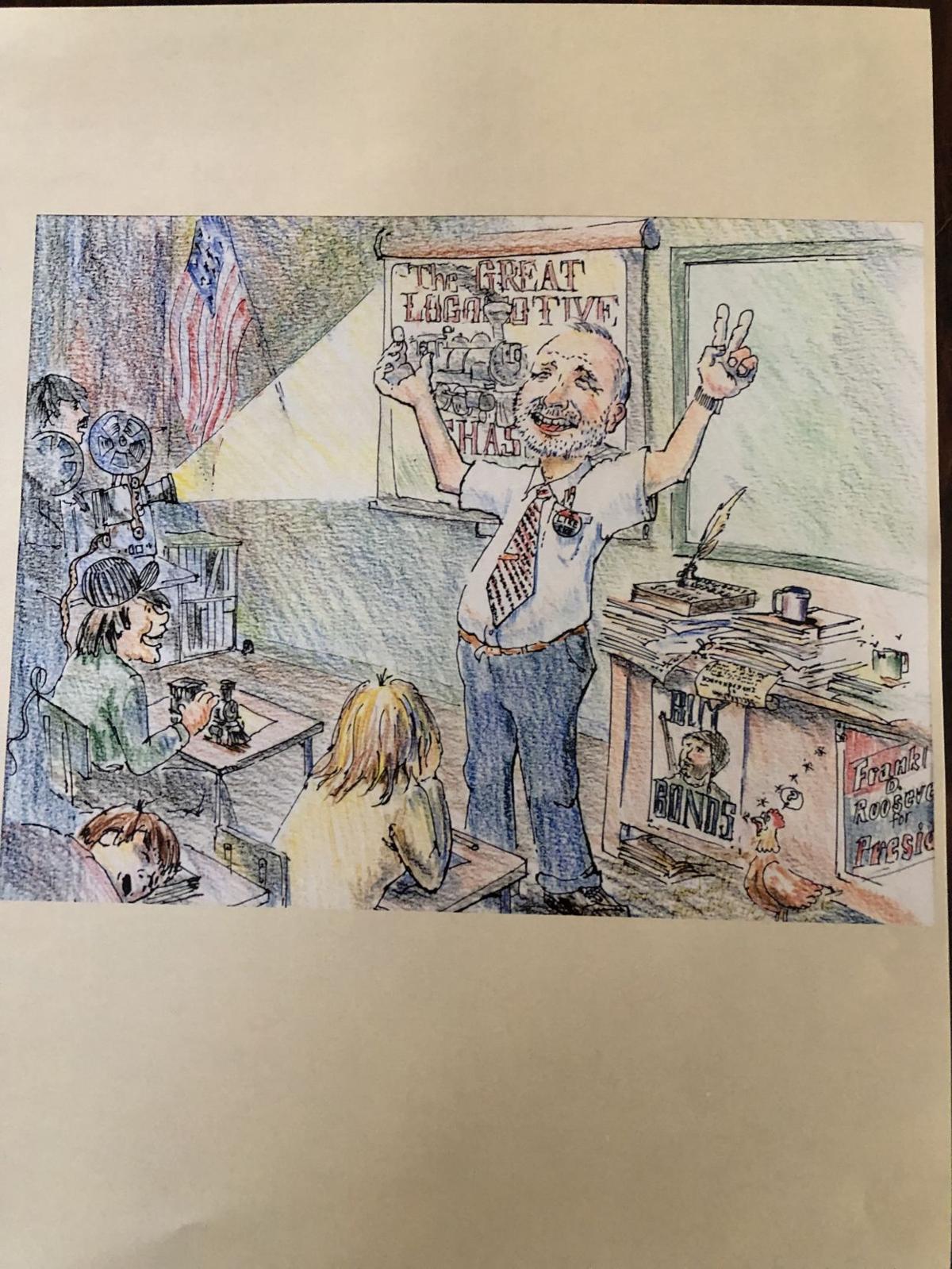 This cartoon of Dan Schofield was drawn by Ed Tucchio, a colleague at Wheeler Middle School. 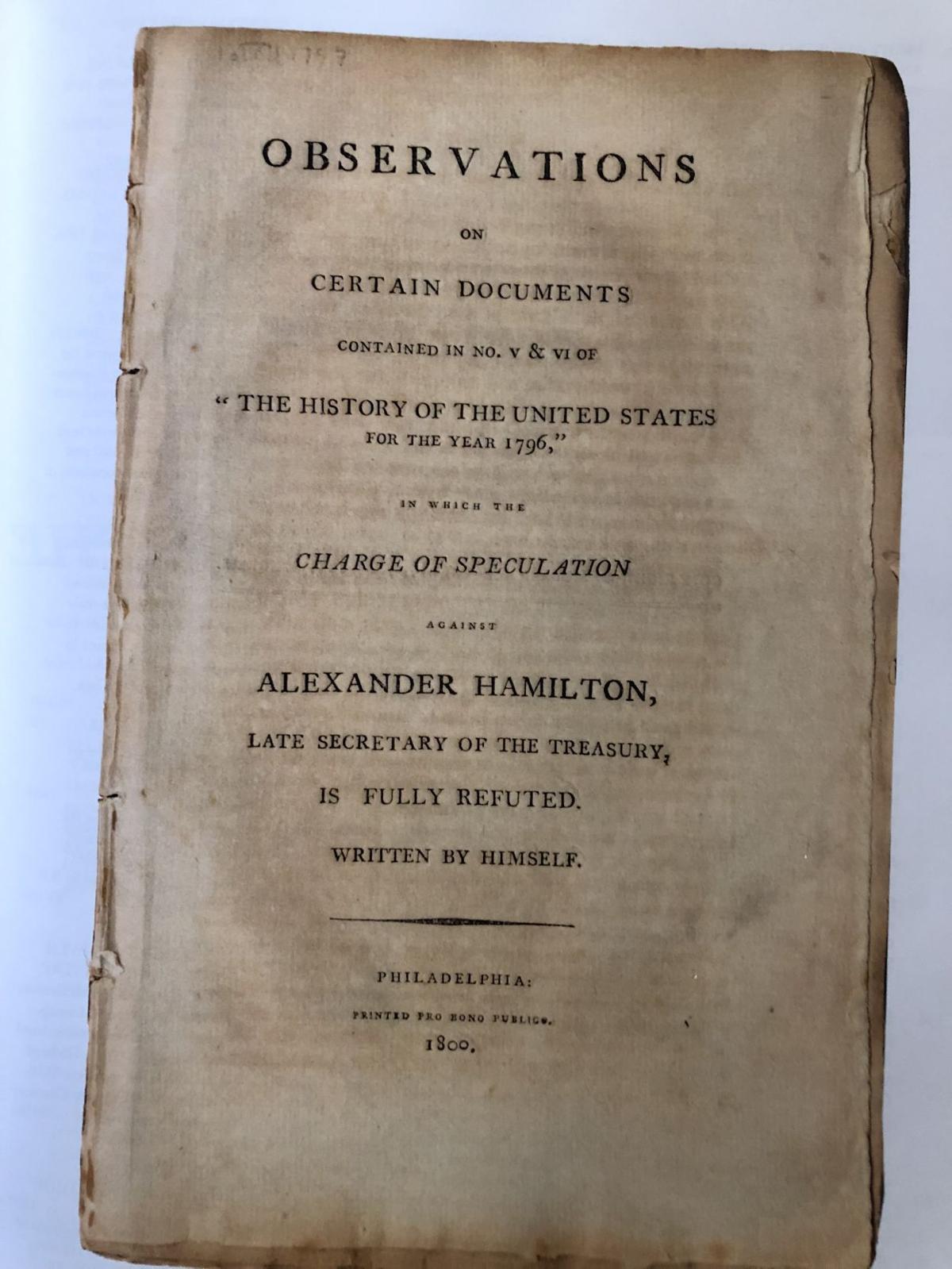 All photos of artifacts courtesy of Eldred's Auction Gallery

The "Reynolds Pamphlet" written by Alexander Hamilton, in which he confesses his affair with Maria Reynolds and admits being blackmailed by her and her husband. 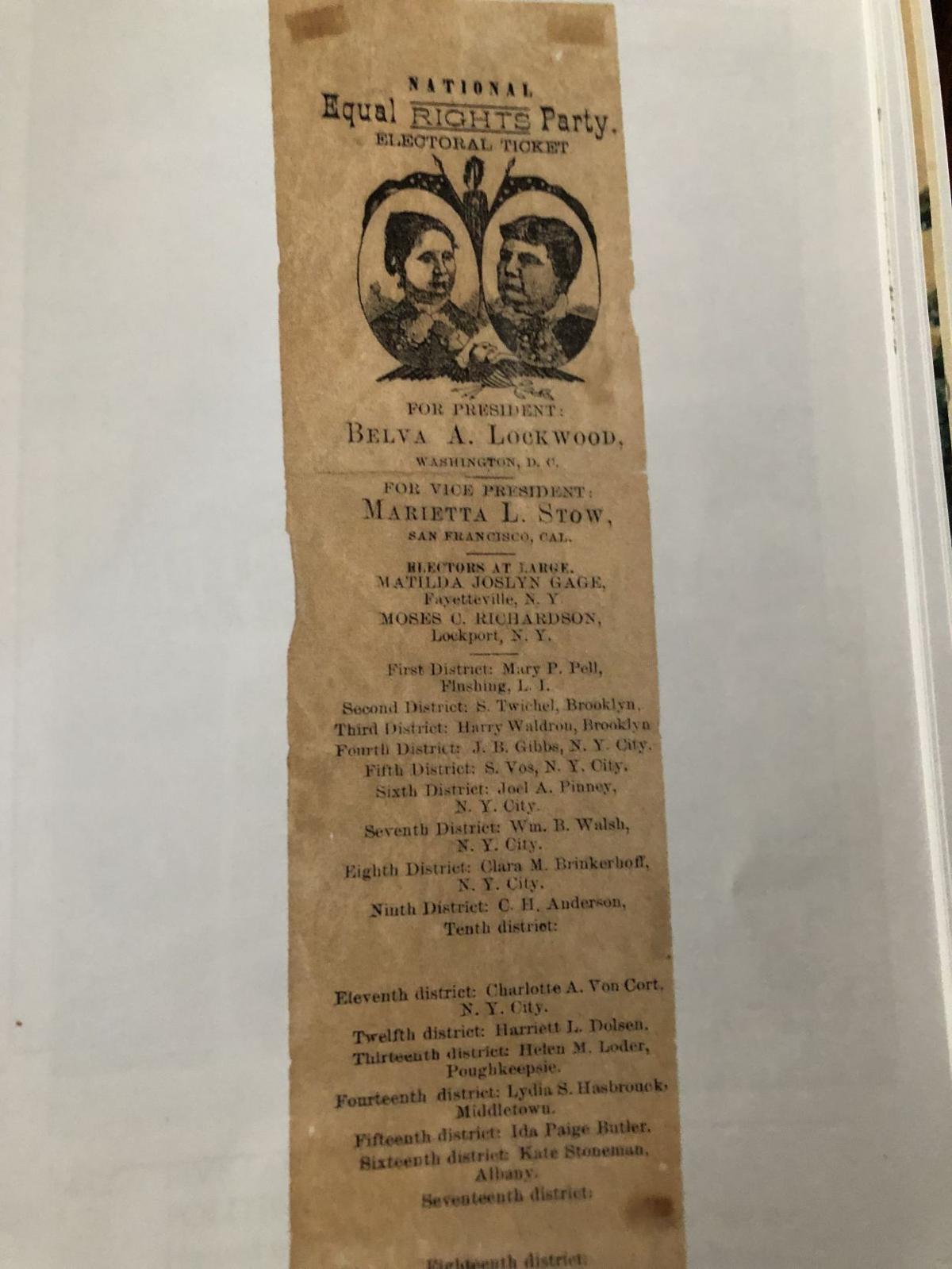 Women's suffrage campaign poster from the collection of Daniel Schofield. 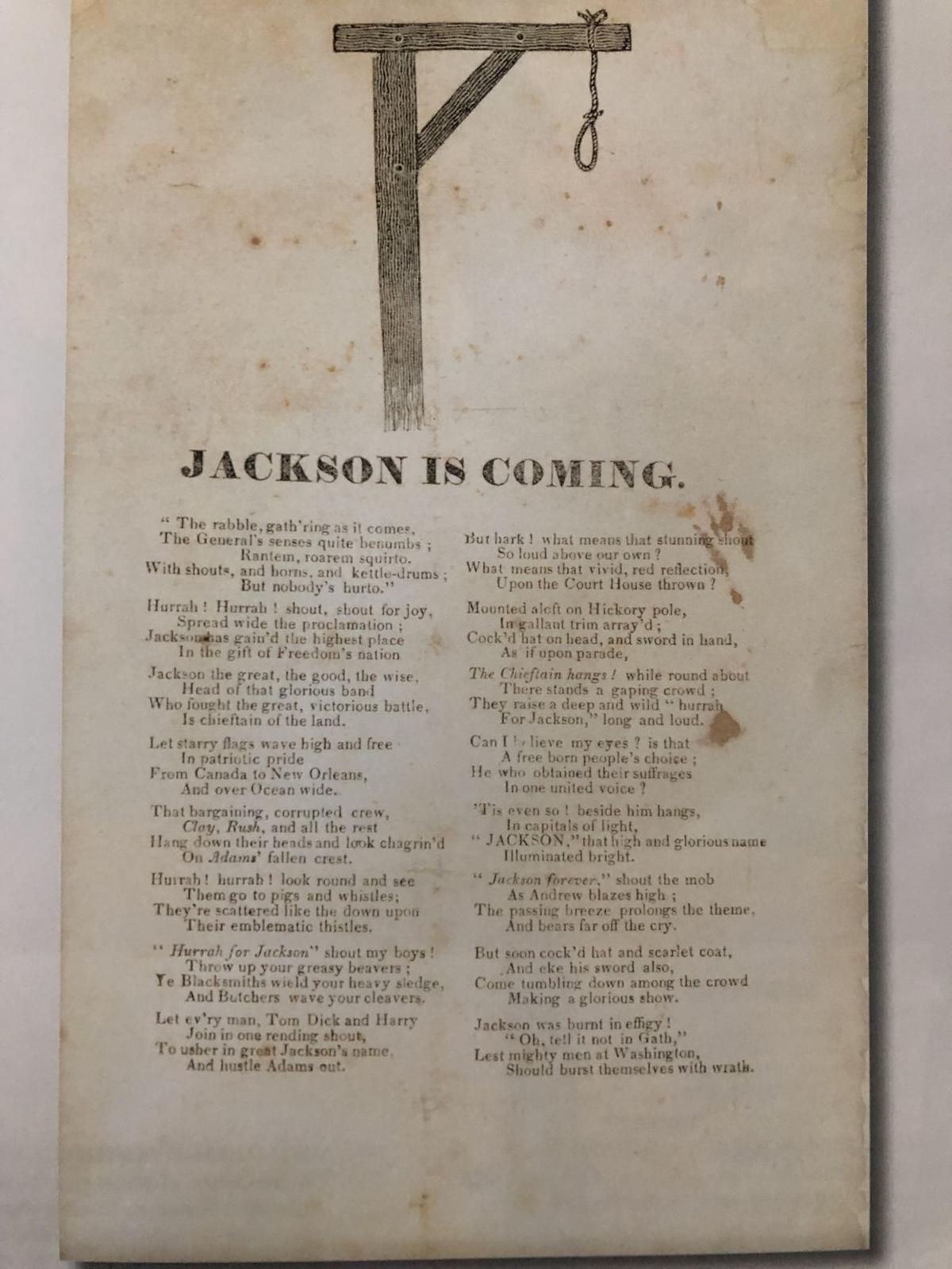 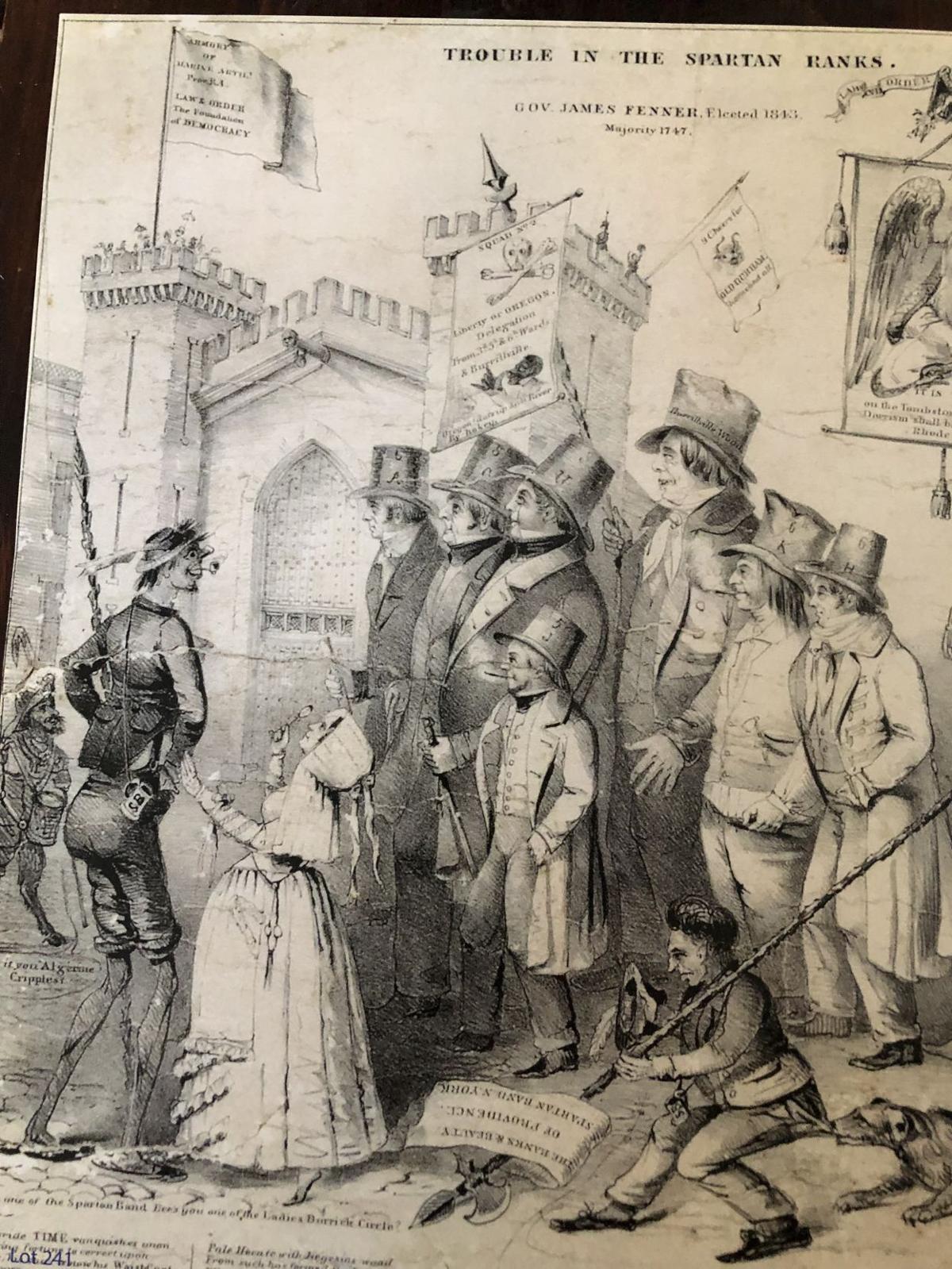 Political cartoon from era of the Dorr Rebellion in Rhode Island. 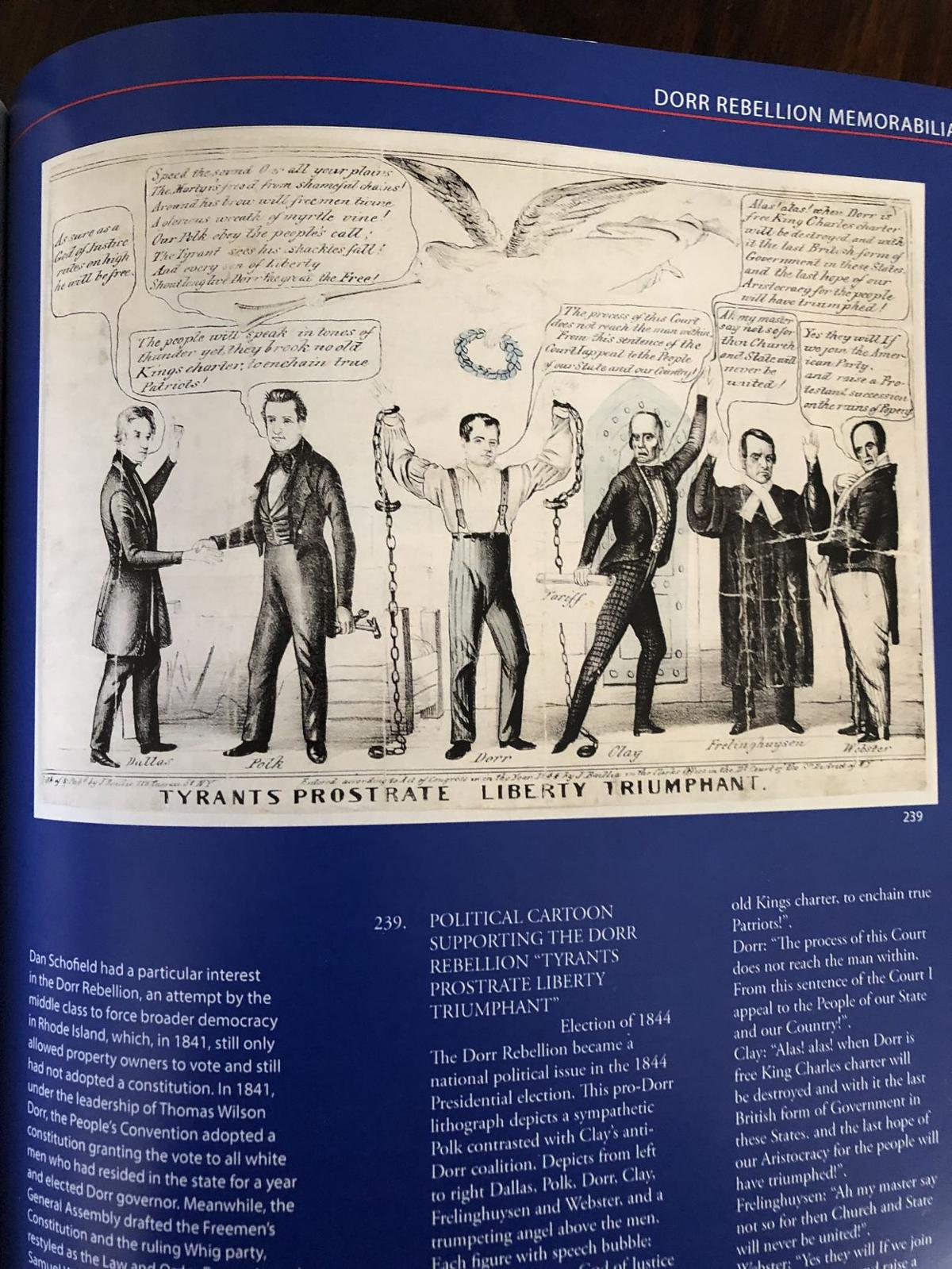 Political cartoon from the era of the Dorr Rebellion in Rhode Island.

This cartoon of Dan Schofield was drawn by Ed Tucchio, a colleague at Wheeler Middle School.

All photos of artifacts courtesy of Eldred's Auction Gallery

The "Reynolds Pamphlet" written by Alexander Hamilton, in which he confesses his affair with Maria Reynolds and admits being blackmailed by her and her husband.

Women's suffrage campaign poster from the collection of Daniel Schofield.

Political cartoon from era of the Dorr Rebellion in Rhode Island.

Political cartoon from the era of the Dorr Rebellion in Rhode Island.

Chances are the Dorr Rebellion no longer resonates with defiant rhetoric, groundswell passions and makeshift citizen armies for most Rhode Islanders, never mind its place in state and national history and the evolution of democracy.
But when the Smithsonian’s National Museum of American History heard that Westerly resident Daniel Schofield’s exemplary collection of political memorabilia, including a number of documents relating to the Dorr Rebellion, was up for auction in October 2017, the museum scooped up the prized lot.
The museum’s interest wasn’t limited to the rebellion, an armed uprising in the early 1840s that pitted supporters of a “People’s Constitution” against Rhode Island’s hastily established state Constitution, which limited voting rights to property owners, essentially the landed gentry. The followers of Thomas Wilson Dorr pushed for the right to vote to be expanded to all white men who had lived in the state for a year. A small step, perhaps, in the pre-Civil War era, but one that provoked a declaration of martial law, and factored in the 1844 presidential election.
Also secured by the museum were auction objects related to President Andrew Johnson’s impeachment; a rare ballot for the election of a former slave to the Georgia legislature in 1870; a California ballot expressing anti-Chinese sentiment in the 1870s; and a New York ballot from the election of 1884, when Belva A. Lockwood ran for U.S. president as the National Equal Rights Party candidate, decades before women were accorded the right to vote.
These items, and some 500 more in the Schofield collection, were auctioned by the Eldred’s Auction Gallery, which is based in East Dennis, Mass., and has an office in Mystic. The sales were in the fall of 2017 and in February of this year.
As dedicated as Dan Schofield was in amassing his vast collection — including the infamous “Reynolds Pamphlet,” published in 1800, in which Alexander Hamilton fessed up to his affair with Maria Reynolds and admitted to being blackmailed by Maria and her husband — so, too, was his devotion to his profession.
Schofield was a history teacher for more than three decades at Wheeler Middle School in North Stonington. He was raised in Arnold Mills, a village in Cumberland, R.I., graduated from the University of Tennessee in Chattanooga, served in the National Guard, and taught the same subject for 37 years at Wheeler before retiring in the late 1990s. He lived much of his adult life in Westerly and died in Westerly in January 2017 at age 79. For the last 16 years of his life, he was the companion of Carol Arruda of Westerly.
“During his many years of teaching American history, Dan made his classroom ‘come to life’ with his collection of interesting trivia and political artifacts,” wrote his sister-in-law, Elizabeth Schofield, in the preface to the auction catalog. “As his love of teaching kindled, so did his interest in political collecting.”
He was well regarded as a Rhode Island historian and, with Russell DeSimone of Middletown, R.I., co-authored the 116-page “Broadsides of the Dorr Rebellion,” published by the Rhode Island Historical Society in 1992.
Linda Costanza of North Stonington was a student of Schofield's and later taught beside him at Wheeler. “I had the opportunity to have one of my favorite teachers as a colleague,” she told me recently. “He was a collector, he knew so much, and he imparted that knowledge to his students. He had a smile, an infectious smile.”
Kenneth Shaw, of Westerly, the retired school superintendent in North Stonington, remembers hiring Schofield. “Dan was a gentleman, very quiet, unassuming, always with a smile on his face, good with kids and staff. I never had a complaint about him in all those years.”
Shaw recalled that once he learned of Schofield’s avocation, he showed him a political button he had saved for years. “He told me he had six of those buttons,” said Shaw.
For the record, among the notable lots in the Eldred auctions,  the Reynolds Pamphlet fetched $7,800; the Belva Lockwood poster, $4,800; a “Railsplitters” campaign sign from the Abraham Lincoln era sold for $9,600; an 1800 broadside published in Boston proclaiming a day of grief for George Washington brought in $5,700; and, sandwiched among the 500-plus items, a rare broadside of the unabashedly purple-prose and factually incorrect epic, the “Battle of Stonington,” penned by Philip Freneau in 1814, together with the “Banks of Ohio,” which went for $840.
Esteemed teacher, acknowledged historian and formidable collector of U.S. political memorabilia dating to the first decades of the 18th century, he, perhaps, would have been most pleased by the way a member of his family, his sister-in-law Elizabeth, elected to appreciate him: “As the saying goes, ‘in the cookies of life, Uncle Dan was the chocolate chip.’ ”
Steven Slosberg, a longtime reporter and columnist, lives in Stonington and may be reached at maayan72@aol.com.

Washington County courthouse in South Kingstown to close; Newport also to be shuttered

Hungry? Here's a rundown of local restaurants and their takeout/delivery statuses.