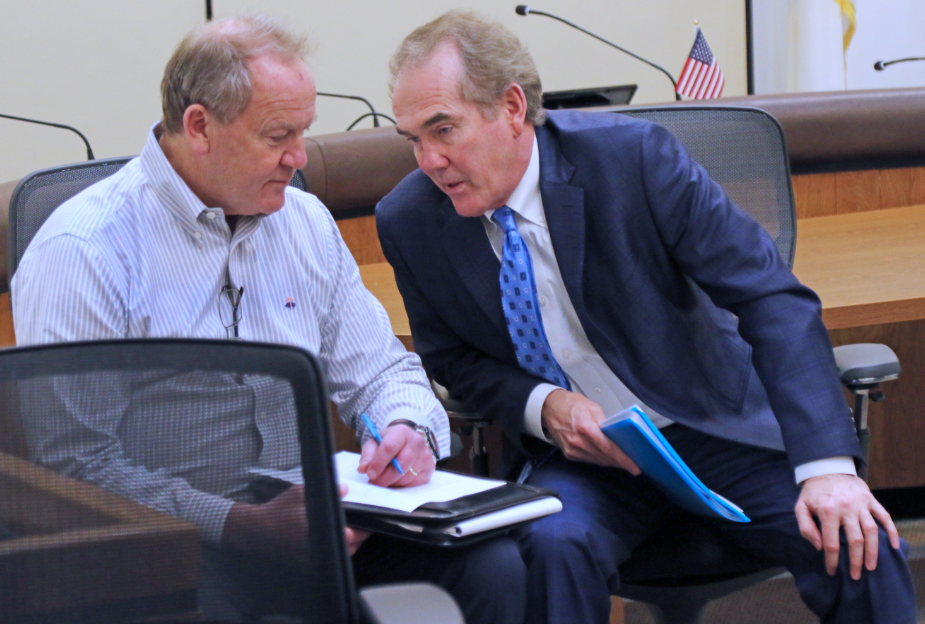 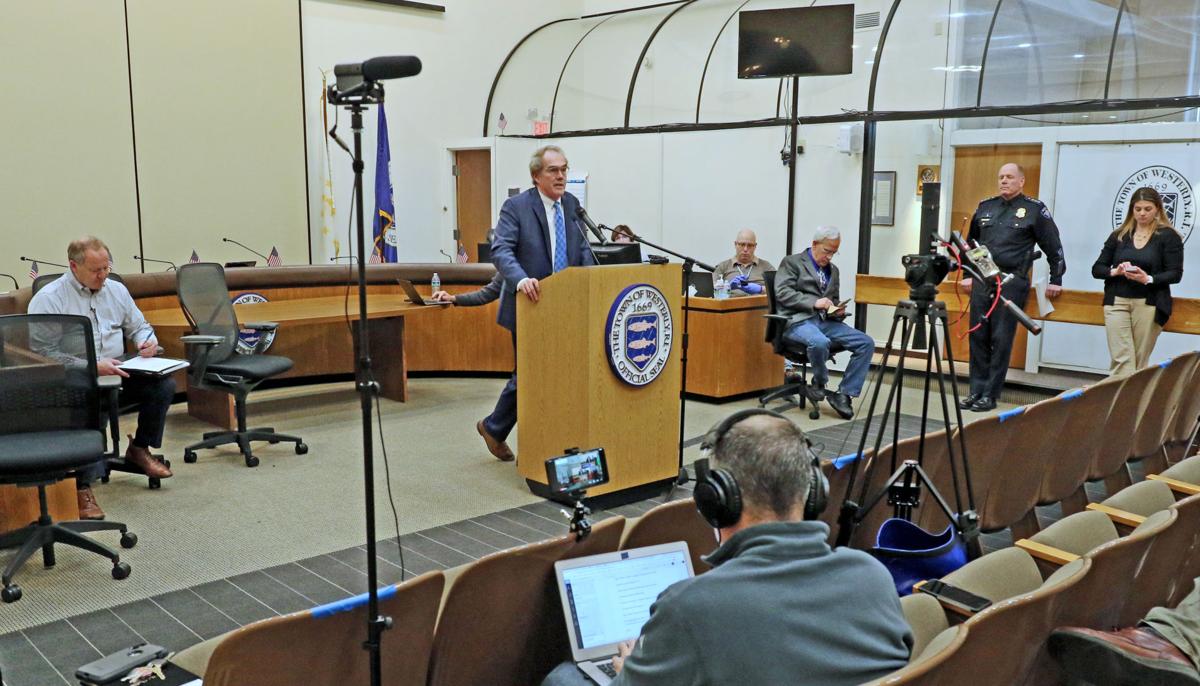 Westerly Town Manager J. Mark Rooney details the impact of the COVID-19 pandemic on Westerly during a press conference in the Town Council Chambers at Westerly Town Hall on Friday, March 19, 2020. Harold Hanka, The Westerly Sun 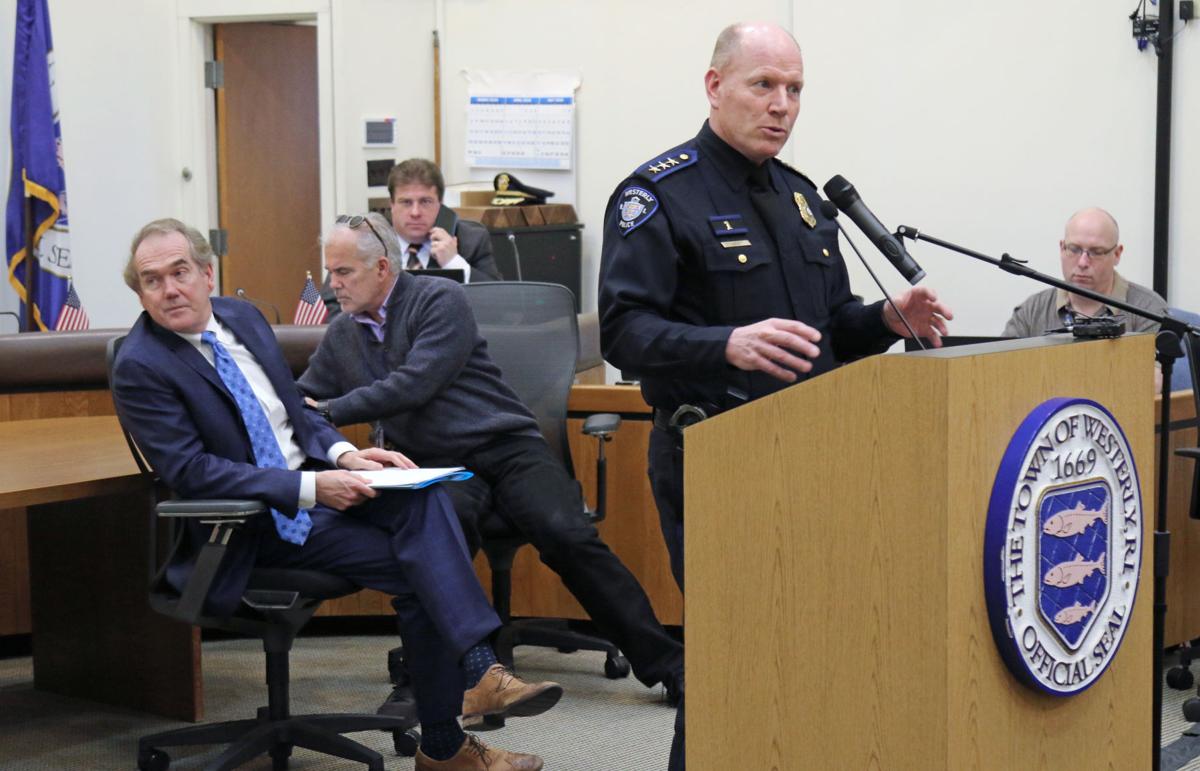 Westerly Police Chief Shawn Lacey describes the role of the police department in trying to halt the spread of COVID-19 during a press conference In the Town Council Chambers at Westerly Town Hall on Friday, March 19, 2020. In background is Westerly Town Manager Mark Rooney, left, and School Superintendent Mark Garceau. Harold Hanka, The Westerly Sun

Westerly Town Manager J. Mark Rooney details the impact of the COVID-19 pandemic on Westerly during a press conference in the Town Council Chambers at Westerly Town Hall on Friday, March 19, 2020. Harold Hanka, The Westerly Sun

Westerly Police Chief Shawn Lacey describes the role of the police department in trying to halt the spread of COVID-19 during a press conference In the Town Council Chambers at Westerly Town Hall on Friday, March 19, 2020. In background is Westerly Town Manager Mark Rooney, left, and School Superintendent Mark Garceau. Harold Hanka, The Westerly Sun

WESTERLY — Residents were praised for their cooperation and encouraged to continue following social distancing recommendations during a Town Council-hosted news conference Friday on the town's response to the coronavirus threat.

Police Chief Shawn Lacey said businesses have all complied with the directives of Gov. Gina Raimondo and the federal government aimed at reducing the spread of the virus, which can cause severe respiratory problems. "I'd like to commend the citizens of the town for doing what they are supposed to do and taking direction on the local, state, and federal level," Lacey said.

The directives have resulted in the closure of restaurants, except for takeout, curbside and delivery. Bars and coffee shops were also forced to close. Municipal playgrounds and recreation facilities are also closed. A strong recommendation from the state also led to the closing of gyms in Westerly, and Lacey said that hair salons and barbershops had also been asked to close.

"As you know the situation is ever changing. We are getting updates every day," Lacey said, adding that new, more severe restrictions could soon be announced at the state level.

The virus has brought about an "extreme economic fallout on our town" and caused 400 local hospitality workers to lose their jobs, said Lisa Konicki, president of the Ocean Community Chamber of Commerce.

Some businesses have closed their doors because of diminished customer bases and a lack of workers, who have been forced to stay home to care for their children. Interrupted supply chains and increased demands of the Family and Medical Leave Act have also been factors, Konicki said.

Konicki encouraged residents to continue patronizing small businesses and local restaurants and asked residents to post photographs of their meals on social media. The chamber is using a marketing fund to reward the makers of such posts with $10 gift certificates.

On a brighter note, Konicki announced that despite having been forced to lay off employees, Grey Sail Brewing of Rhode Island plans to begin making hand sanitizer at its Canal Street headquarters and would donate the product for free. "This is the kind of generosity and leadership that is needed," Konicki said.

The annual chamber-sponsored Easter egg hunt scheduled for April 12 will not occur but will take place during the annual Virtu Art Festival scheduled for May 23 and 24, Konicki said.

Despite the potential devastation, Konicki sounded a note of optimism. "This region and the town of Westerly particularly is made up of incredible people with a tremendous capacity for caring for one another and a history of bouncing back after being hit hard. We've been tested before and we always persevere," Konicki said.

Superintendent of Schools Mark Garceau said Cox Communications has offered to provide internet access to families with children who do not have access, in order to facilitate the distance learning protocol that the public schools will start on Monday.

Town Manager J. Mark Rooney outlined changes that he implemented at the transfer station to limit workers' interaction with the public. Starting Monday and running until at least April 1, the facility will only accept trash in town-issued bags and single stream recycling (bottles, cans, clean paper and cardboard) or from commercial haulers. Residents will be restricted to bringing brush only on Saturdays but landscape companies will not have to adhere to the limitation.

Rooney thanked residents for doing business with Town Hall remotely. He said the Town Hall will remain open for the time being. In the event of a closure, Rooney said services would be made available by appointment.