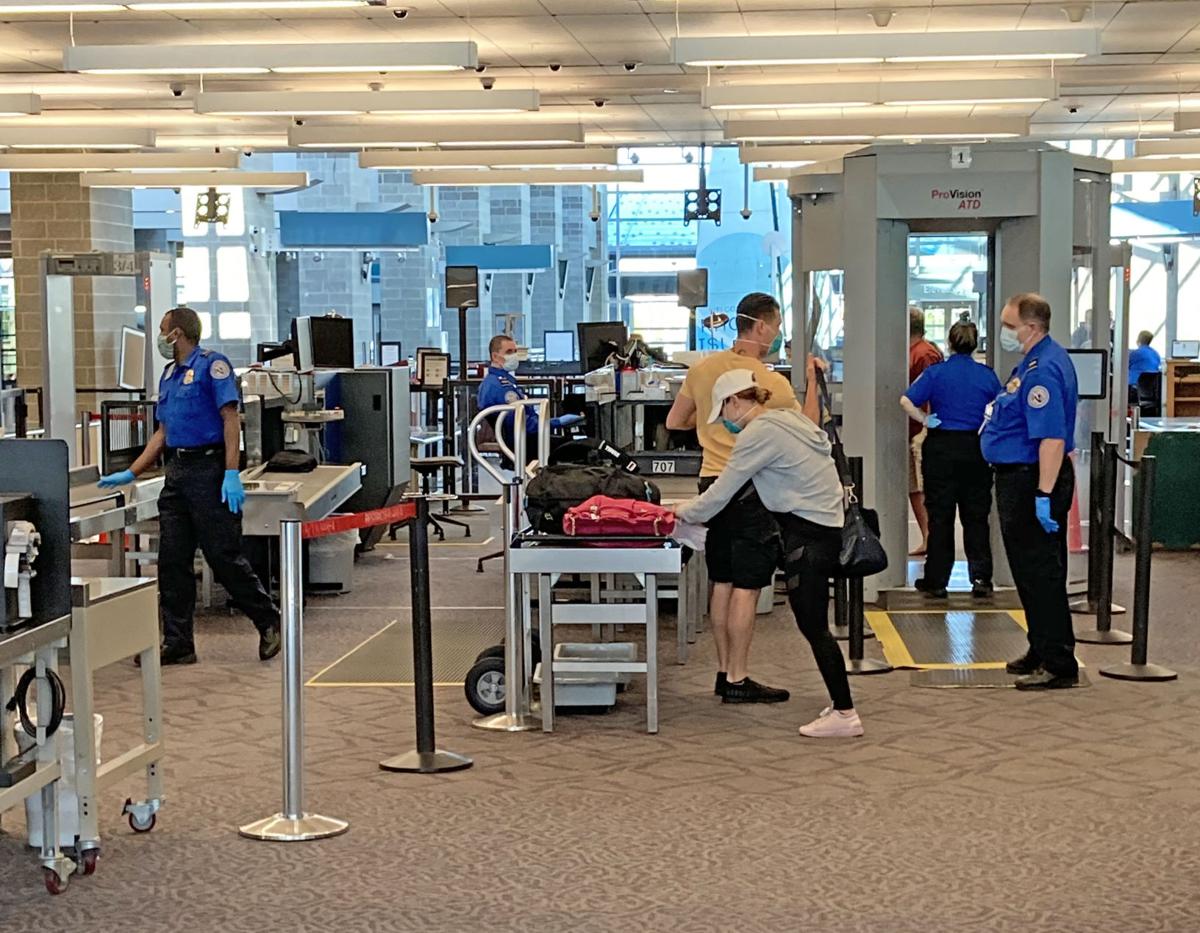 A security checkpoint line at T.F. Green Airport at 9 a.m. on Thursday, May 14, is about as short as you'll ever see it. (Steven Slosberg, Special to The Sun) 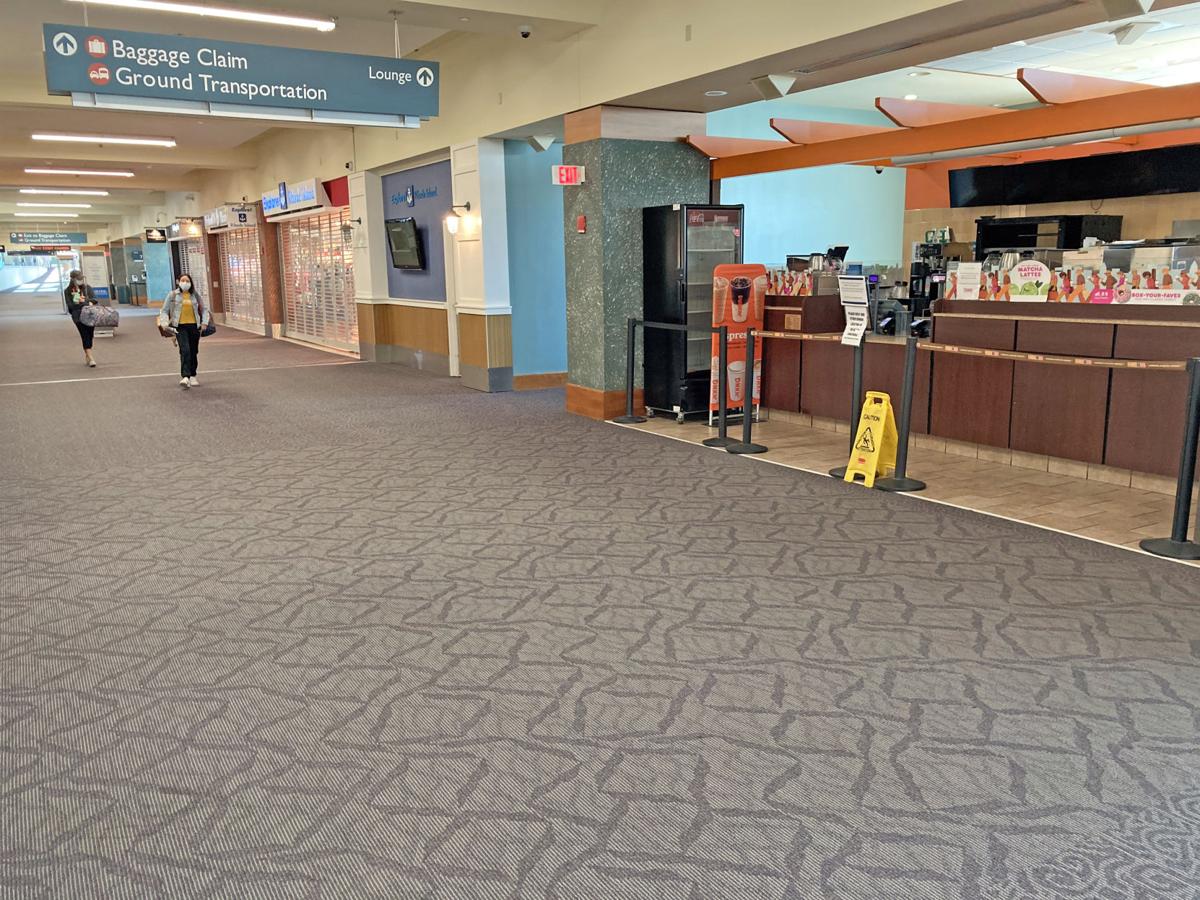 The south concourse at T.F. Green Airport is farily deserted at 9 a.m. on Thursday, May 14. (Steven Slosberg, Special to The Sun) 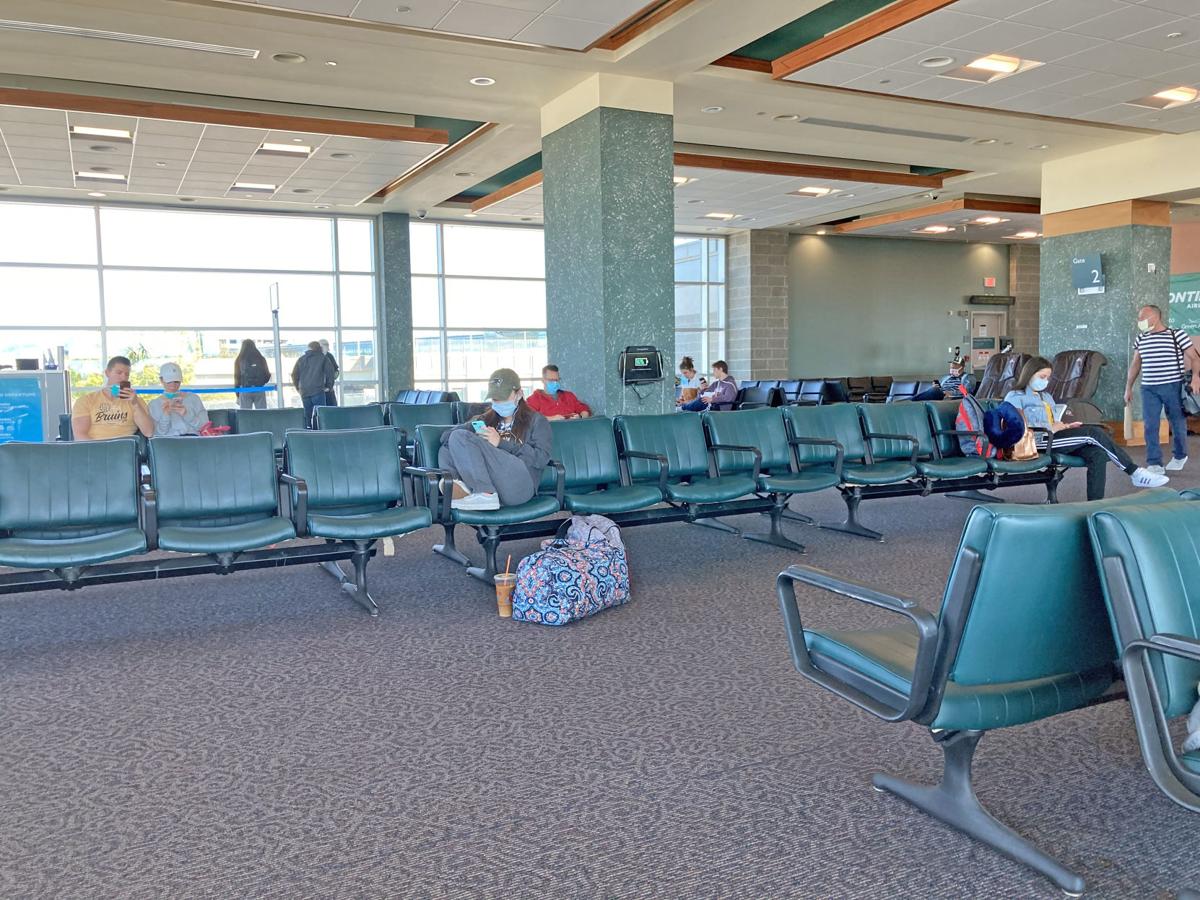 The Gate 3 lounge an hour before a 10 a.m. flight on American Airlines from Providence to Charlotte, N.C., on Thursday, May 12. (Steven Slosberg, Special to The Sun)

A security checkpoint line at T.F. Green Airport at 9 a.m. on Thursday, May 14, is about as short as you'll ever see it. (Steven Slosberg, Special to The Sun)

The south concourse at T.F. Green Airport is farily deserted at 9 a.m. on Thursday, May 14. (Steven Slosberg, Special to The Sun)

The Gate 3 lounge an hour before a 10 a.m. flight on American Airlines from Providence to Charlotte, N.C., on Thursday, May 12. (Steven Slosberg, Special to The Sun)

It was not a fool’s mission, brash statement of insurrection or even a dare, just a calculated venture, based on safety assurances about air filtering from American Airlines, personal protection and plans and very attractive airfares.

Other than the suspension of food and beverage service on the flights, a scheme, roughly but effectively imposed, of checkerboard seating and the requirement that all passengers and personnel wear face masks, the flights were no different from pre-quarantine ones. However, deplaning was more orderly, with passengers being asked not to stand and crowd while waiting to walk off the plane but to sit until those in the row in front of them had fetched their overhead bags and left.

What was different were the airports. Green, before my 10 a.m. flight, looked like it was just going through the motions with skeletal staffing — TSA security officers outnumbering passengers, virtually no lines at check-in or screening, walkways between the north and south concourses lightly traversed and most of the concessions closed. On the south concourse, from which the American flights depart, all concessions — Dunkin’ Donuts, Wolfgang Puck, newspaper, candy and book shop — were shuttered. Securing caffeine or a magazine meant trekking to the far end of the north concourse. TSA officers did remove a small packet of gourmet cheese from my backpack and subject it to some sort of chemical screening, and then gave the OK.

Virtually everyone was wearing a face mask.

But the airport, usually a hive on a weekday morning, resembled a catacomb.

Charlotte, on the other hand, a vastly larger airport, was running wide open.

Many, but not all, of the food concessions were serving and doing long-waiting line business, passengers were sauntering or scurrying from terminal to terminal, mostly without a mask and, by my hasty reckoning, airport activity was pretty much as usual.

One obstacle that I’d overlooked in booking the flight a month earlier was that South Carolina’s governor had imposed a mandate that anyone traveling from what was deemed the tri-state virus hotspot — New Jersey, New York and Connecticut — had to self-quarantine for 14 days upon entering the state. Two weeks before the flight, the mandate was lifted, based, the governor said, on the federal CDC — Centers for Disease Control and Prevention — guidelines.

In brief, that was a monumental relief.

At Green, repeated announcements instructed anyone returning to Rhode Island from international or continental flights to self-quarantine for 14 days. I presumed that meant anyone intending to stay in Rhode Island.

From Green to Charlotte, a flight of just under two hours, there were about 100 passengers on the plane, and one of the attendants said the airline had a limit of 150 passengers. On the 20-minute leg from Charlotte to Greenville-Spartanburg, there were maybe 20 to 25 passengers.

Social distance spacing on either flight was not a problem, but it was obvious that families or friends who wished to sit three-abreast were allowed to do so. I was sitting alone in an exit row with the benefit of more leg room. However, the exit row in front of me was empty and promised even more room to stretch out. But the flight attendant turned down my request to move, citing social distancing. Her pull-down seat for takeoff and landing was opposite that front exit row.

Though the flights carried the usual number of passengers, there were far fewer flights available. Delta Airlines recently suspended flights at Green Airport and Manchester-Boston Regional Airport in Manchester, N.H., until September. American Airlines stood its ground, so to speak.

On board, a few passengers wiped down seats with disinfectant. One woman entered and exited the restroom using her elbows. The pre-takeoff chit chat was the customary anticipatory buzz.

If anyone wondered in which NFL nation the airport was located, the abundance of New England Patriots face masks left no doubt.

Some mindsets — and marketing moments —survive any virus.