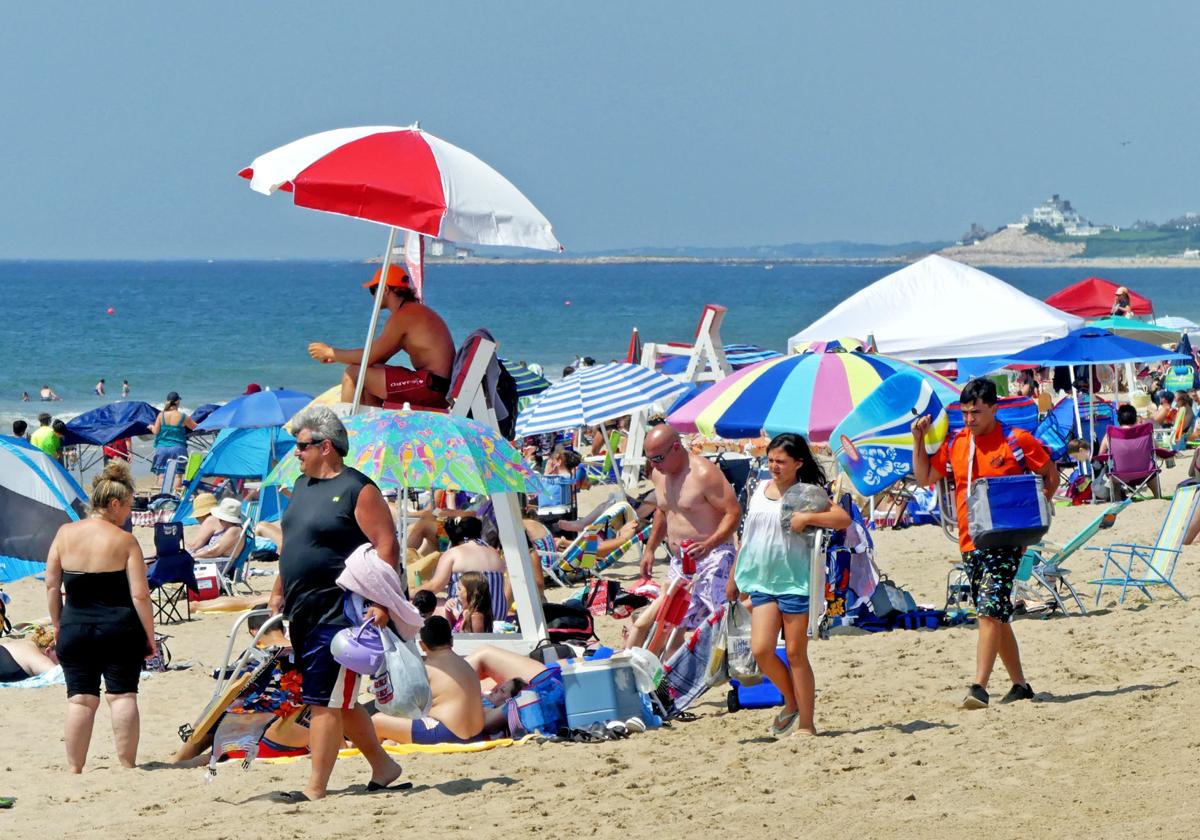 The recent stretch of mid-summer humidity and heat has made Misquamicut State Beach a popular place to cool off, on Wednesday, July 11, 2018. Harold Hanka, The Westerly Sun 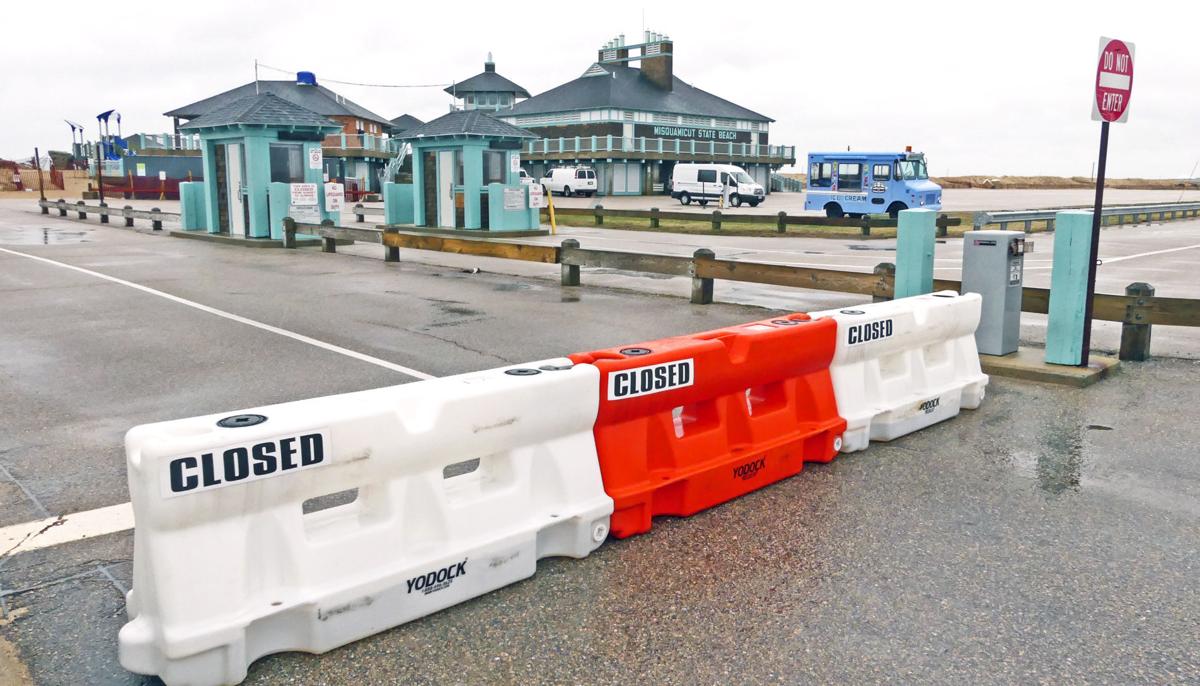 The entrance and exits at Misquamicut State Beach are blockaded on Friday morning, April 3 2020. Gov. Raimondo has ordered all state beaches and parks closed to the public in an effort to stem the pandemic. Harold Hanka, The Westerly Sun

The recent stretch of mid-summer humidity and heat has made Misquamicut State Beach a popular place to cool off, on Wednesday, July 11, 2018. Harold Hanka, The Westerly Sun

The entrance and exits at Misquamicut State Beach are blockaded on Friday morning, April 3 2020. Gov. Raimondo has ordered all state beaches and parks closed to the public in an effort to stem the pandemic. Harold Hanka, The Westerly Sun

WESTERLY — Misquamicut State Beach will open Monday. Swimmers and sunbathers will be asked to follow social distancing guidelines and other restrictions may be implemented, state officials said Friday while announcing the opening of all state beaches.

The number of parking spaces will be reduced at most of the state's seven beaches, according to a news release from the state Department of Environmental Management. The size of the parking reductions and whether they would apply to Misquamicut was unclear Friday afternoon.

"As we welcome people to our world-class state beaches this year, we're asking beach visitors to take additional steps to protect themselves, their families, and the people around them so everyone can safely enjoy the outdoors,” said DEM Director Janet Coit. "While I am happy that state beaches will be open to the public, it is important for Rhode Islanders to know that the lots may fill quickly. People should expect that they may encounter traffic backups and closed lots. Please be patient and plan for delays. We want everyone to enjoy a safe experience and a prepare for a different summer, even at the beach.”

The state delayed the opening of most of the state beaches until Monday as part of Gov. Gina Raimondo's effort to slow the spread of COVID-19. East Matunuck State Beach in South Kingstown and Scarborough State Beach in Narragansett opened on Memorial Day but the others remained shuttered. The reopening off all of the beaches planned for Monday coincides with the first day of the second phase of Raimondo's plan to reopen the state's economy.

The announcement Friday was a welcomed relief for Caswell Cooke Jr., president of the Misquamicut Business Association and a member of the Town Council.

"It's great, I'm glad that the decision has been made," Cooke said.

While the  state beach remained closed last weekend the two town beaches and beaches owned by Misquamicut businesses were open. Cooke was an outspoken advocate for the state beach to open last weekend and said the town narrowly avoided a huge logjam when mediocre weather kept the huge crowds that otherwise would have swarmed to the beaches stayed home.

Cooke said the MBA will now turn to making sure the public understands the area is open.

"Once the word closed is uttered we have to work hard...I imagine it will take the next month or two get the word out," Cooke said.

Cooke said he is hopeful some of the other restrictions will be lifted or modified. "Especially in terms of entertainment. Maybe allowances can be made for outdoor entertainment," Cooke said.

While the MBA has been forced to cancel most of its planned programing it will expand its popular drive-in movie offerings.

MBA members have been patient and understanding, Cooke said.

"I'm really impressed with the way the businesses have adapted...everyone's pretty positive. It's just something we're all learning to live with," Cooke said.

The beaches and tourism are significant parts of the local economy. "The beaches are so important to Westerly and our economy and for our small businesses," said Town Council President Christopher Duhamel on Friday.

Town officials are in communication with DEM and Raimondo's office trying to learn more about possible reductions to the parking lot at the state beach, Duhamel said. As of Friday afternoon DEM told The Sun that no additional information was available.

According to the DEM news release, state beaches will be open daily starting Monday until Labor Day. Lifeguards will be on duty and concessions, beach pavilions and restrooms will be open, "although porta johns may be needed at some locations."

The beach concessionaire at the state beaches has rolled out a new online ordering website as part of their reopening plans. Beachgoers can make purchases at Salty’s at http://www.saltysri.com/. Customers will receive a text message when their order is ready for pick up. DEM is encouraging use of the service to reduce lines and crowding in and around the concession areas, according to the news release.

Beachgoers will be required to follow social distancing guidelines and remain at least six feet from others outside their household, DEM said. The department is also encouraging the use of masks in public areas.

Resident, non-resident and senior season beach passes can be purchased online at www.riparks.com/beachpass.  Season beach parking passes may also be purchased in person at all state beach locations on weekdays and on weekends and holidays at the Scarborough overflow lot.

Parking fees for the 2020 Season will remain the same as last year. The daily beach parking fee (now known as a flex pass) for residents is $6 on weekdays and $7 on weekends and holidays. The fee for a season pass for residents is $30. Non-resident parking is $12 on weekdays and $14 on weekends and holidays. A season pass is $60 for non-residents. A 50% discount on daily parking fees and season passes applies for senior citizens 65 years and older. Fees are based on the vehicle registration of each vehicle entering beach facilities.