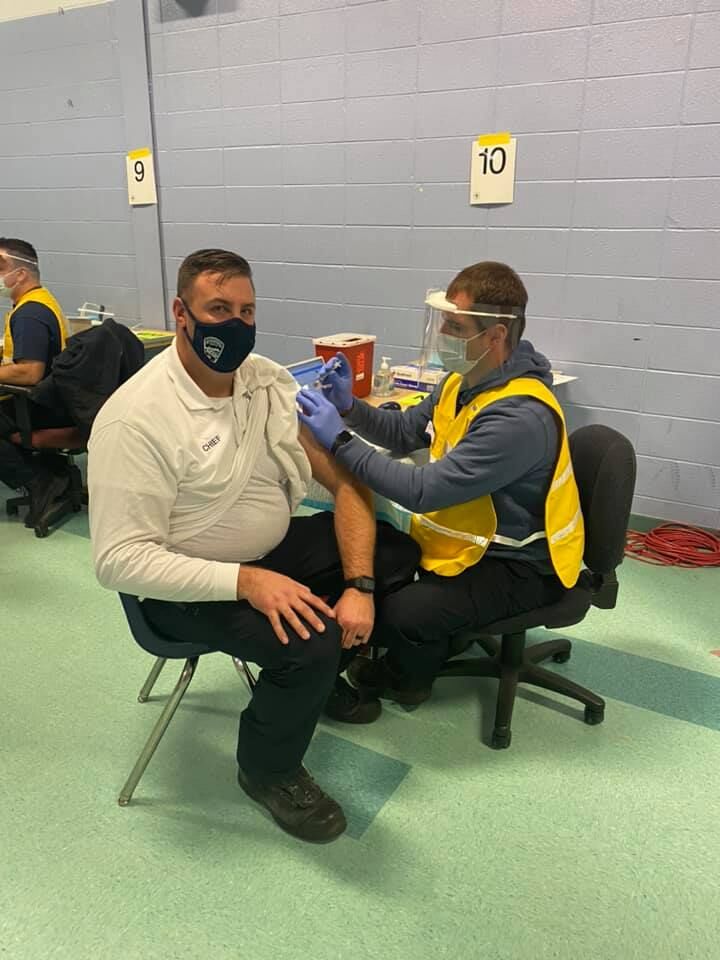 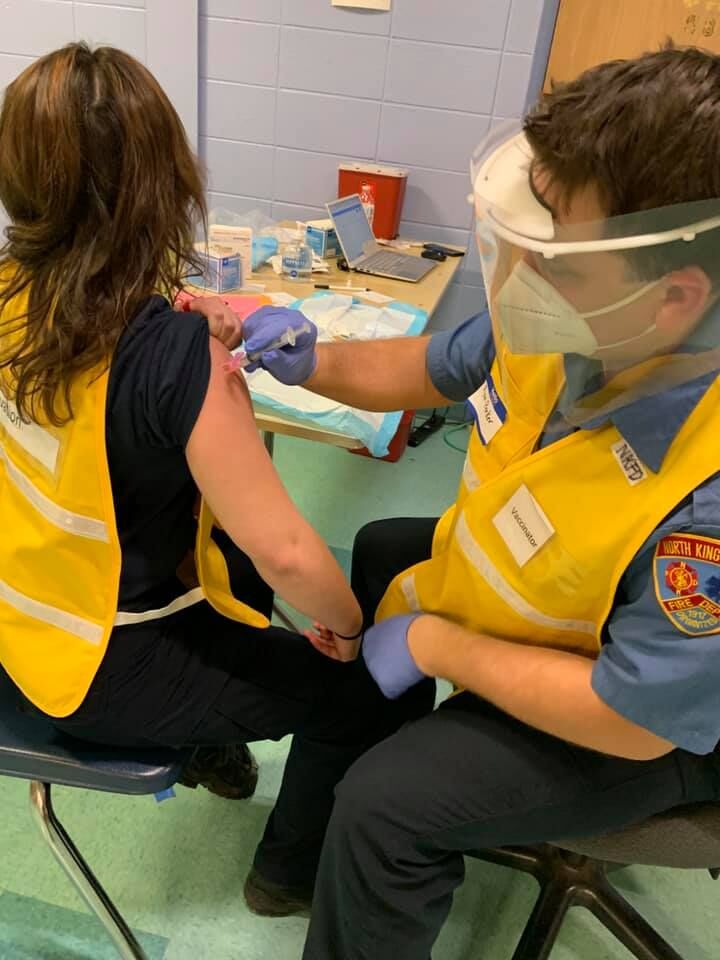 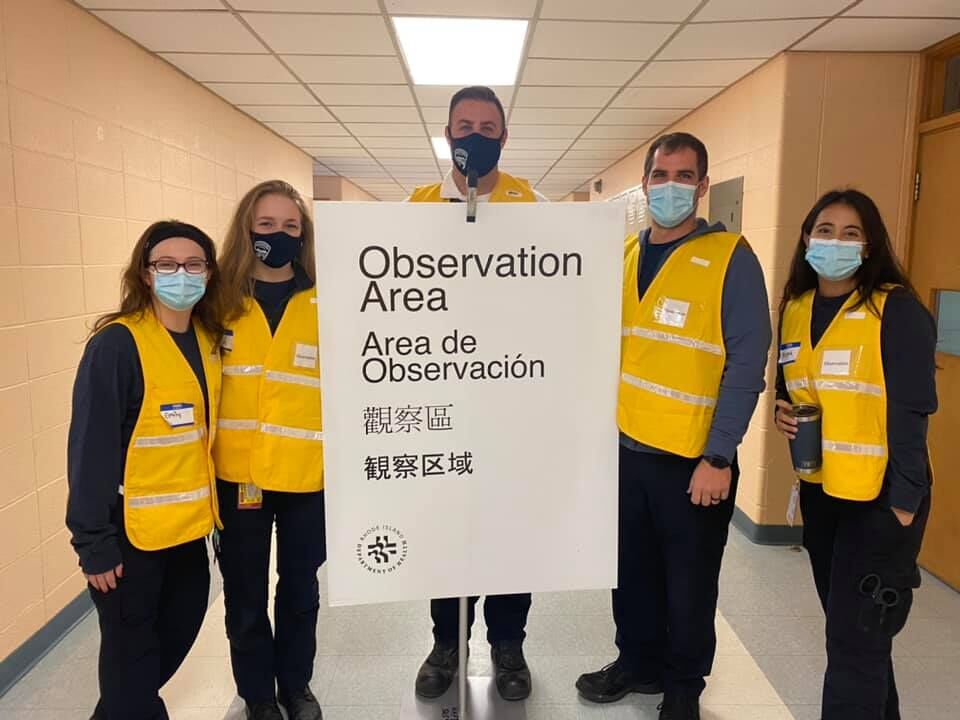 First responders and medical personnel from across southern Rhode Island have started receiving COVID-19 vaccinations as part of a coordinated regional effort through the state Department of Health in conjunction with local police, fire and ambulance personnel.

“It is truly a regional collaboration and is part of a greater effort to help keep the community safe,” said Kettle, who also received the Moderna vaccination on Monday. “We have seen strong interest from first responders and are doing our best to make sure those who want the vaccine are given a chance to get it by the end of the weekend.”

The regional effort is part of a statewide system designed to distribute the vaccinations as quickly as possible. According to Dr. Philip Chan, an infectious disease specialist and medical director with the Rhode Island Department of Health, the state’s vaccine rollout had already led to 13,000 people receiving doses over the past few weeks.

Chan said in a press release late Tuesday that the vaccination effort began on Dec. 14 with a doctor in Providence — he is directly involved in treating those suspected of having COVID-19 — and has continued ever since, with an eye on expanding availability in the coming weeks after those on the front lines receive the vaccination.

Chan said the state is currently using both the Pfizer and Moderna vaccines, each of which will require those being vaccinated to receive a follow-up injection within 28 days of the first. Both vaccines have been determined to be safe for public use with minimal side effects and a greater than 95% efficacy rate.

“We started off vaccinating high-risk workers in hospitals, and this week started vaccinating residents and staff in nursing homes. We're planning to administer initial doses of the vaccine at all nursing homes by mid-January,” Chan said. “This week, we also started clinics for home health and hospice workers, EMS personnel, and first responders.”

In South County, Kettle said a number of communities have worked together to begin delivering the vaccination to first responders as expediently as possible. The vaccinations, which are not yet available to members of the public, are all being administered from a bubble clinic established in a municipal building in South Kingstown.

The southern location, one of five across the state, services police, firefighters and medical personnel from the towns of Westerly, Hopkinton, Richmond, Charlestown, North Kingstown, South Kingstown, Narragansett and Jamestown. The southern clinic is working exclusively with the Moderna vaccine, officials said.

“The vaccinations are delivered by staff with a number of different groups who have been specifically trained in how to handle it,” Kettle explained. “It may be given by an EMT, cardiac medic, paramedic, or even a doctor or nurse. It is an expansive effort that has been more than weeks in the making.”

Through the first part of the effort, local officials said first responders in the community have been receptive to receiving the vaccination. In Westerly, Police Chief Shawn Lacey said last week that he has seen “a very high level of interest,” and was working with his officers to make sure all those interested would have the opportunity to receive their vaccinations.

Lacey, who has also served as COVID-19 coordinator for the community, could not be reached for further comment Wednesday.

Dunn’s Corners Fire Chief Keith Kenyon said his volunteers have also been “very interested” in getting the vaccination, noting that all but a handful had responded to earlier emails regarding the effort and saying that “most (of our volunteers) had their first dose on Monday.”

In Charlestown, Kettle said those serving with the ambulance service have also shown a strong interest in the vaccinations. In fact, he said his department sent a mass email with appropriate links to all 70 of the department’s members, receiving replies from 67, including 53 who had already opted to get the vaccine.

“It is still very early in the process and there is no official count as of yet, but for the Charlestown Ambulance Rescue Service it appears we will be in the range of about 80% receiving the vaccinations by the time the first responder-specific rollout is completed,” he said.

Those first responders who have not yet received the vaccination are encouraged to sign up for an opportunity during weekend efforts Saturday and Sunday. Officials indicated the site would not operate at full capacity during the New Year’s holiday.

Chan said that, from a state perspective, once the full rollout to protect health care workers is finished, vaccination teams will then refocus to additional populations who work or live in higher-risk settings.

”We have a major focus on equity,” he said. “That means not only making sure that the communities and sectors hardest hit have access to the vaccine first, but also making sure that every person in every neighborhood in Rhode Island has access to a vaccine.”

He noted that despite some early success, it will take months to begin providing the vaccine to the general public.

“As the vaccine becomes more available in the coming weeks, we will continue to provide regular updates about who can get vaccinated and where,” Chan said. “We plan to make vaccines as accessible as possible at local doctors' offices, pharmacies, community clinics, and more. But we are all going to need to be patient. Rhode Islanders will be vaccinated over the course of months, not weeks.”