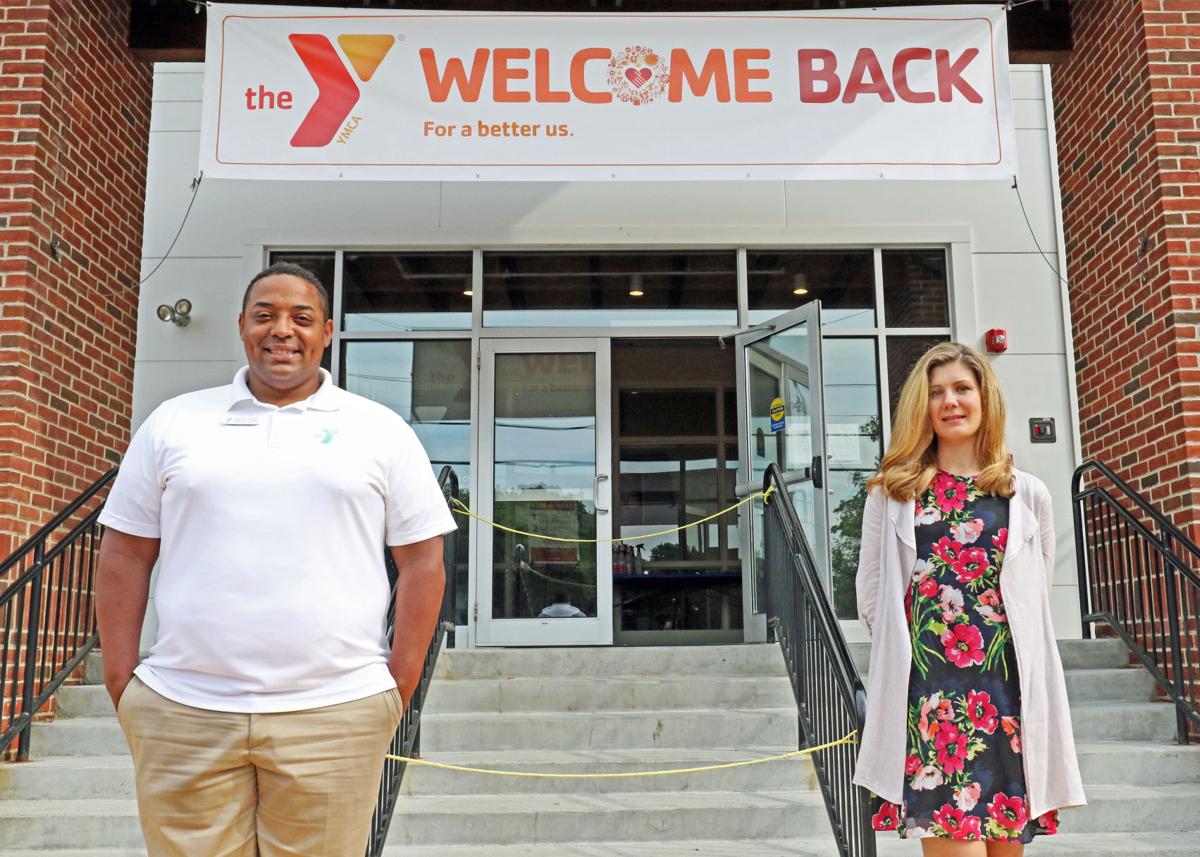 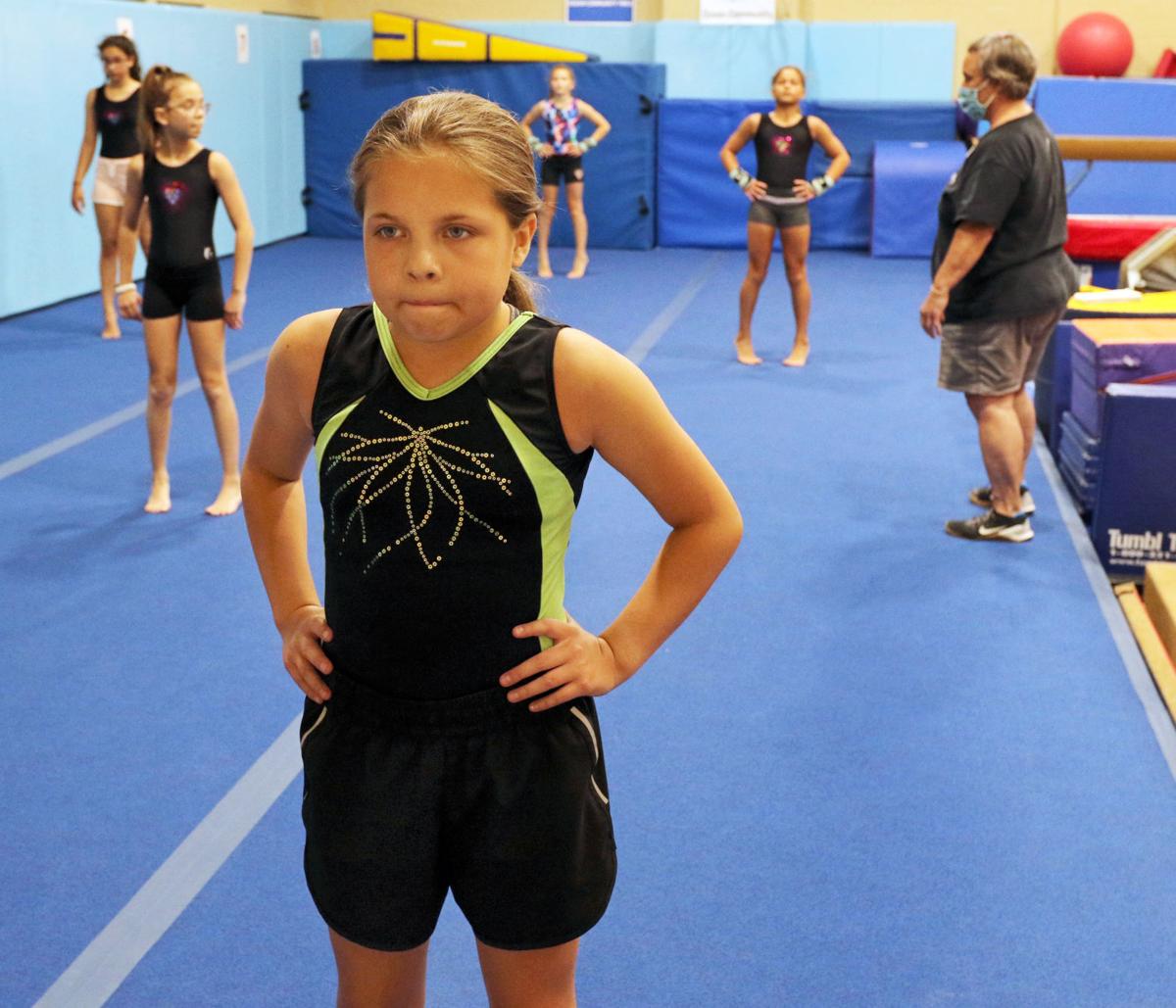 Aubre Parson, 11, a member of the Ocean Community YMCA gymnastics team, has returned to practices with teammates at the Westerly facility. | Harold Hanka, The Westerly Sun 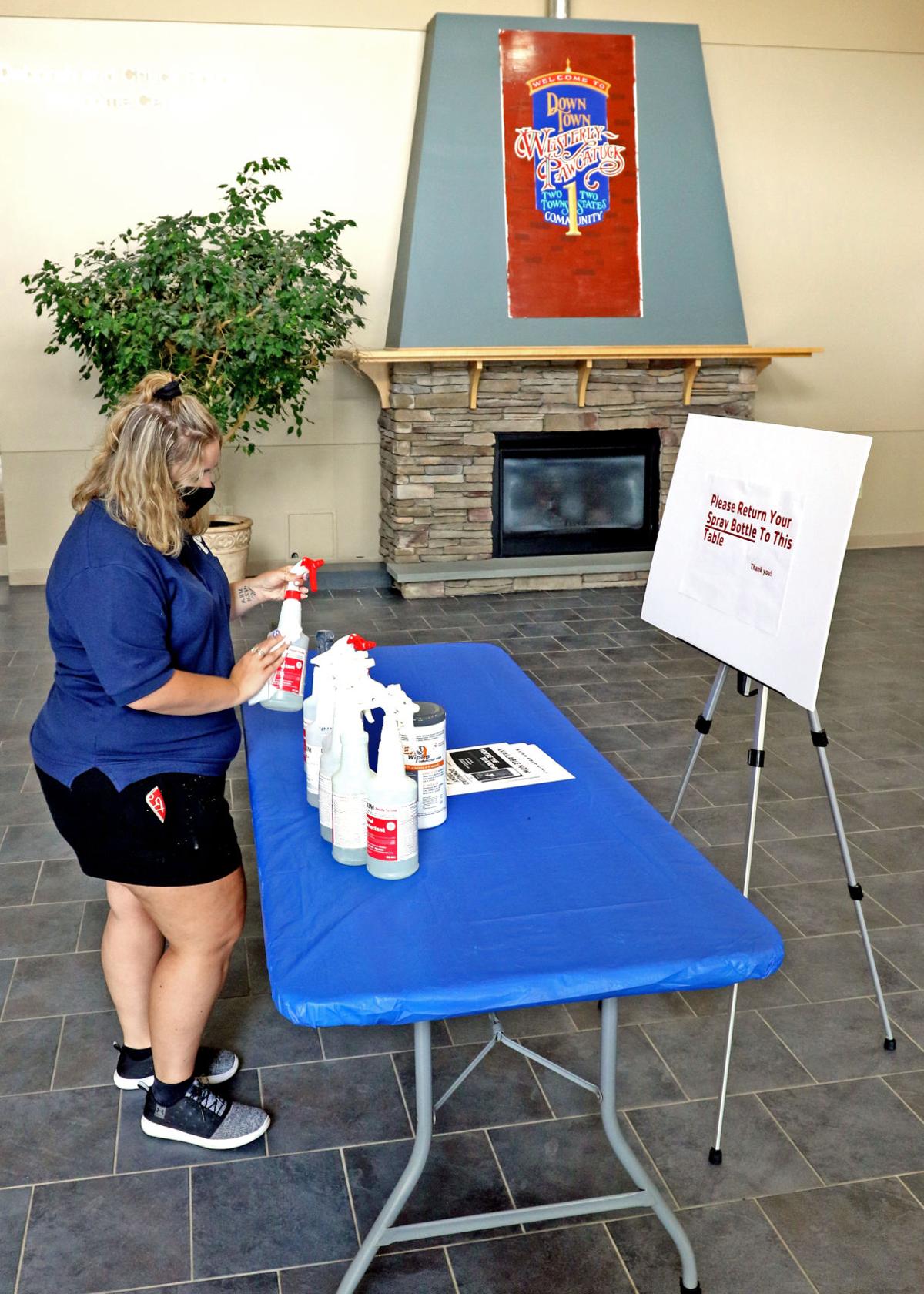 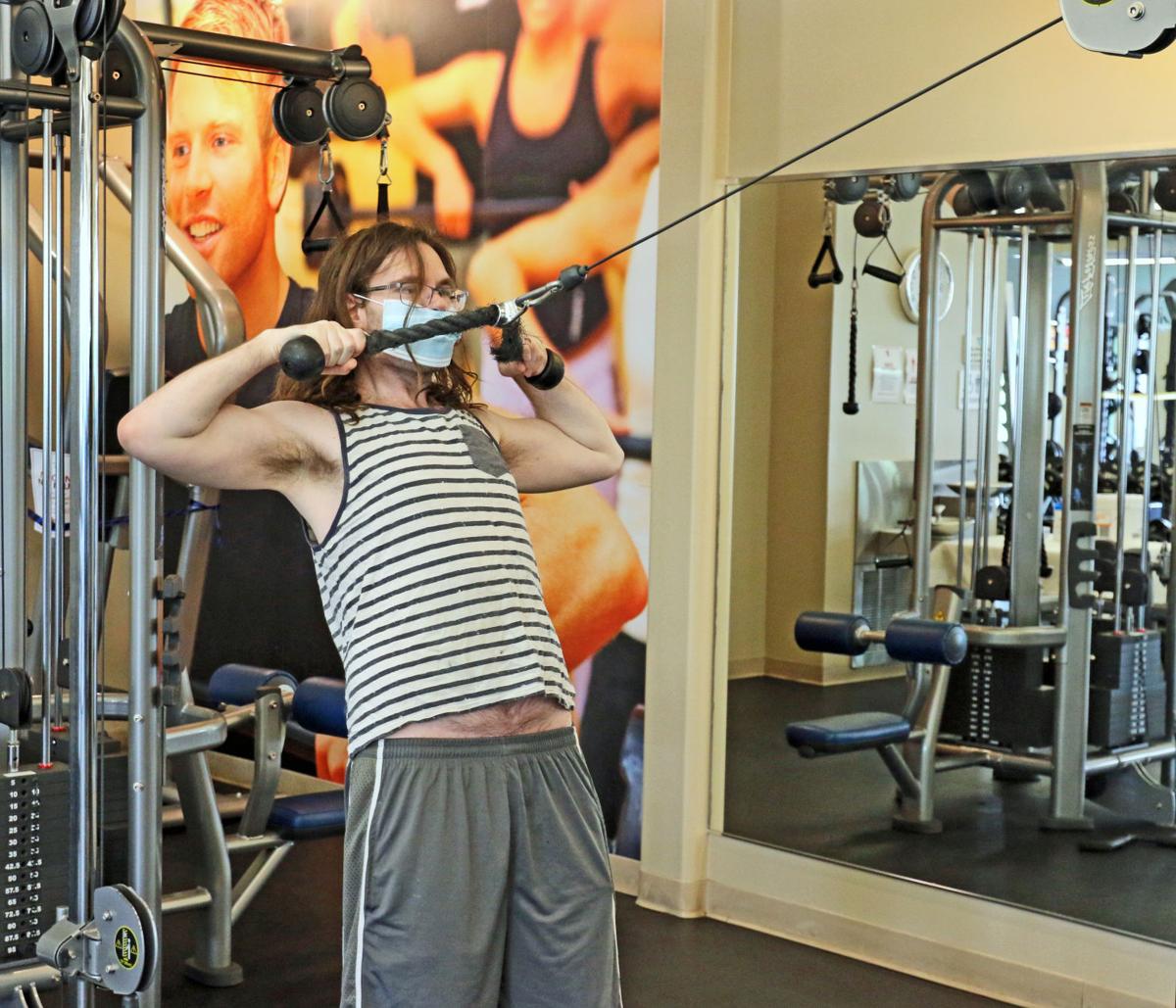 Mark Yuells, a Y member, works out on weight machine in the fitness center on Wednesday July 8, 2020. Harold Hanka, The Westerly Sun 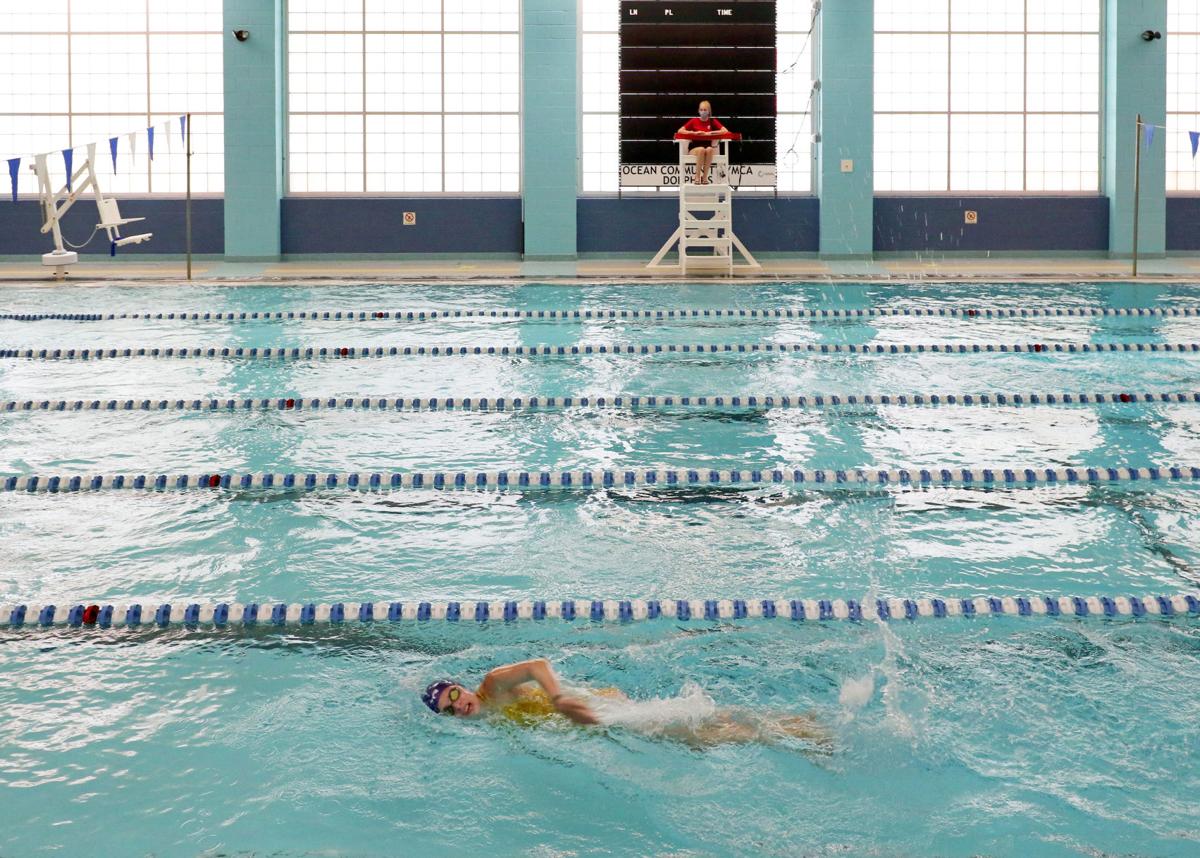 Members of the YMCA Dolphins swim team have returned to practice. Harold Hanka, The Westerly Sun 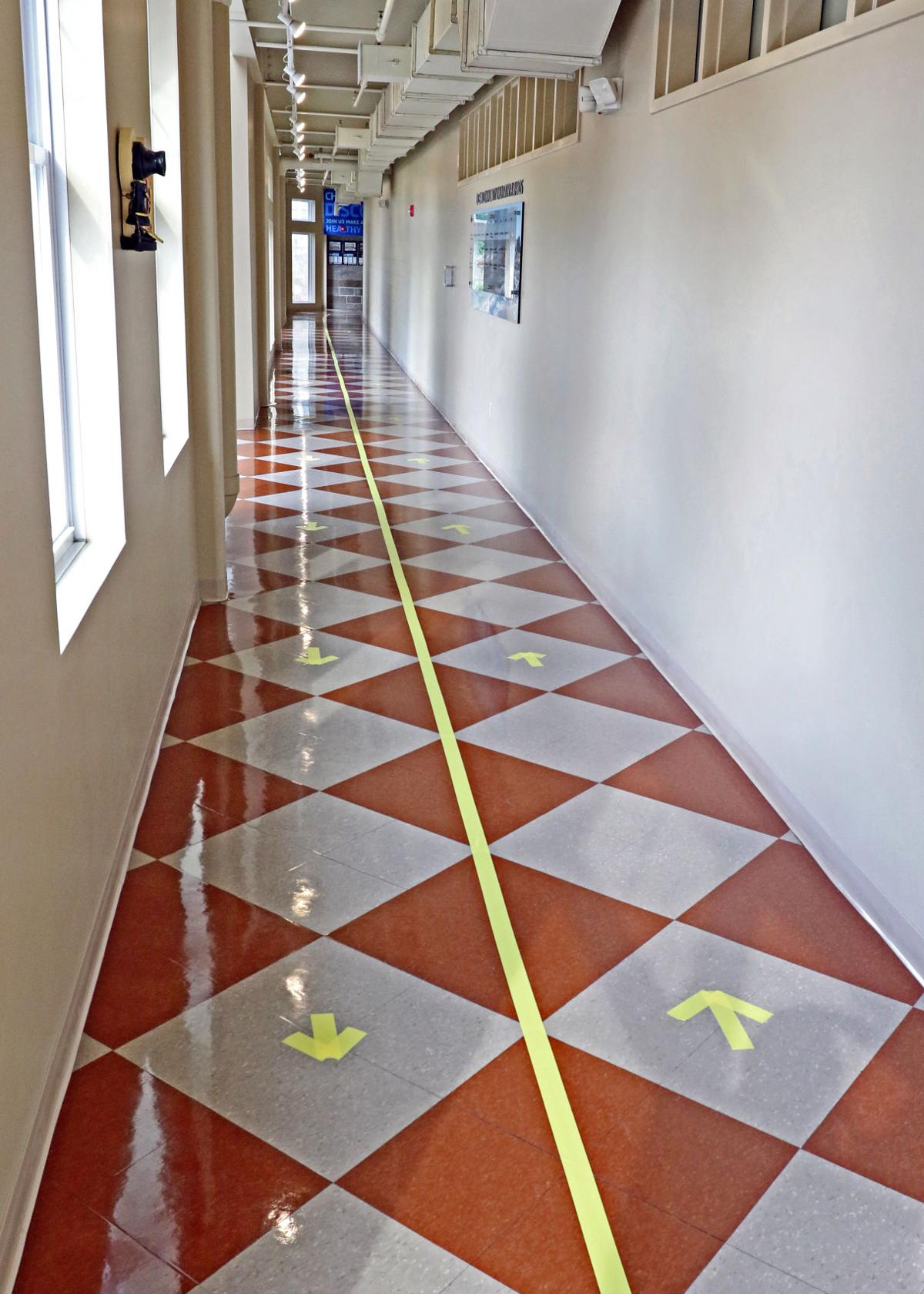 All corridors in the Westerly YMCA facility are marked with taped directional arrows and lanes. Harold Hanka, The Westerly Sun 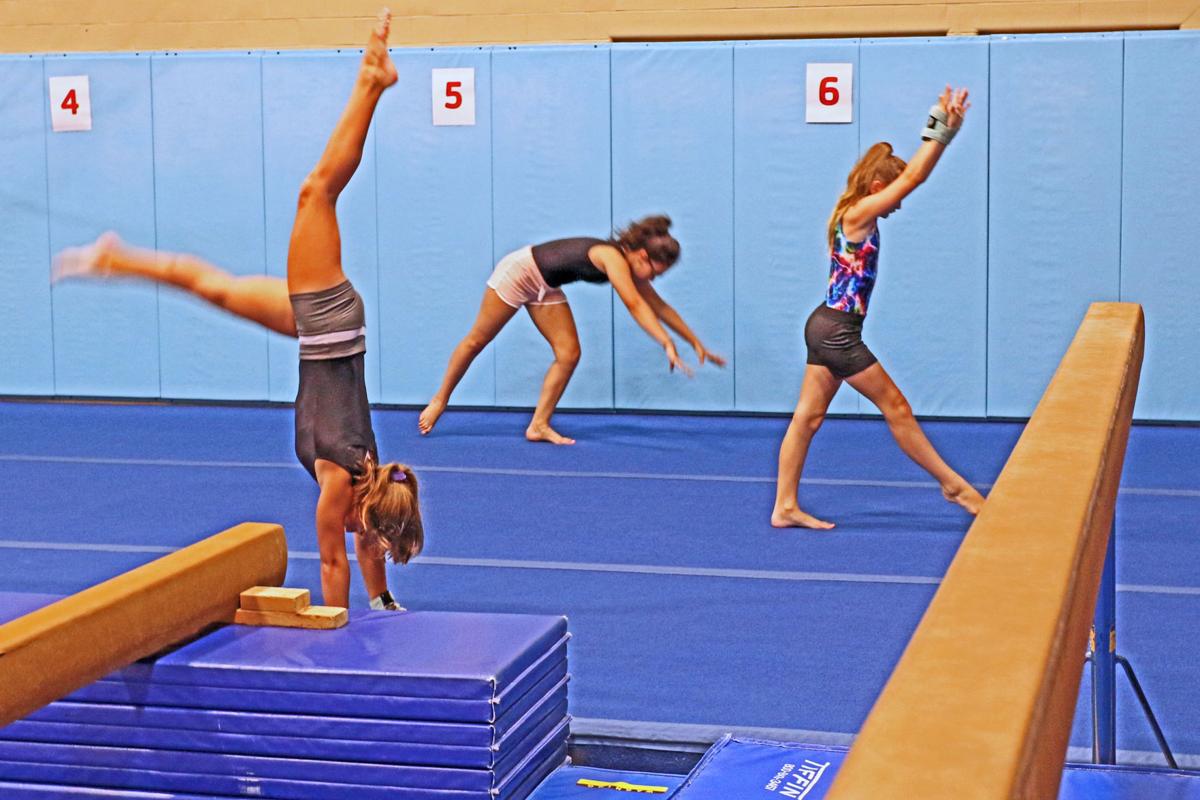 Aubre Parson, 11, a member of the Ocean Community YMCA gymnastics team, has returned to practices with teammates at the Westerly facility. | Harold Hanka, The Westerly Sun

Mark Yuells, a Y member, works out on weight machine in the fitness center on Wednesday July 8, 2020. Harold Hanka, The Westerly Sun

Members of the YMCA Dolphins swim team have returned to practice. Harold Hanka, The Westerly Sun

All corridors in the Westerly YMCA facility are marked with taped directional arrows and lanes. Harold Hanka, The Westerly Sun

WESTERLY — A fundraising campaign that was off to a roaring start in February, then forced into an abrupt suspension in March, has returned in July with a renewed sense of determination and urgency.

The Ocean Community YMCA's annual Support Campaign — which enlists an army of volunteers who raise hundreds of thousands of dollars for scholarships and community members in need — has been relaunched, according to Stacey Jackson, the Y's director of annual giving.

"We had to pause things," said Jackson, "but just temporarily."

Jackson said the campaign was in week four of a six-week period and had raised $413,000 of its $505,000 goal when the coronavirus brought things to a halt earlier this year, including the cancellation of several crucial charity events.

"Now that all three of our branches have reopened and members are returning," she said, "we thought it was a good time to get back into it."

The three branches, the Westerly Branch on High Street, the Arcadia Branch in Richmond and the Naik Family Branch in Mystic, closed in March, when the pandemic took hold in the region. Although the buildings were shuttered, Jackson said, staff members were busy. The Y sponsored virtual fitness programs, kept in touch with their senior population with wellness checks by telephone, and stayed in contact with members via regular email updates.

At last, she said, all three facilities are open, with all required safety measures in place ... and then some.

"Things look different," she said, noting that in the Westerly branch, the spin exercise bikes are now lined up in the gymnasium, all placed 14 feet apart. The pools, too, in Mystic and Westerly, are open, with a reservation policy in place, and restrictions on the number of swimmers allowed at a time.

The Y continued to fulfill its mission throughout the closure, Jackson said, a mission that states "social change happens when people come together and invest in our children, health and neighbors."

Funds are more critical than ever, Jackson said, as the Y has seen a spike in requests for aid.

There are people who have been laid off from work during the pandemic, and former members who have lost income and are unable to keep up with membership payments.

"The stories we’re hearing from our members who have experienced financial hardship due to COVID-19 are heartbreaking," Jackson said. "Yet, we are overwhelmed by the kindness and outpouring of support from people who have stepped up ... as both donors and volunteers."

"We see daily acts of kindness amid the chaos of this pandemic, because we are a community of caring and generous people," said Jennifer Schwindt of Mystic, who is co-chairing the campaign along with Jan Chamberlain of Westerly. "We came together to support one another after Hurricane Sandy, and we will do it again now."

Schwindt called the Y "a haven for thousands of families, children and seniors ... many of whom are going through immense hardship right now."

"The annual support campaign provides financial aid to those that need it so they can continue to use the Y," she said.

Jackson said 100 percent of the money raised during the annual campaign goes directly to the YCares Financial Assistance program. Last year, in 2019, more than 3,500 people were awarded scholarships for Y programs, memberships at all three branches, and summer camp.

When the campaign kicked off in February, at a breakfast meeting held at Ocean House, hundreds of volunteers listened intently as two local women shared personal, moving stories about the help they received from the financial assistance program, and the life-changing events that occurred as a result.

Both Michaela Jacobs of Hopkinton and Holly Norton of Mystic, beneficiaries of the YMCA's financial assistance program, told the volunteers in attendance that initially they were reluctant to ask for help but were encouraged by staff members who learned of their hardships.

Norton explained how she found a YCares application online, filled it out "not really knowing how much it would help ... but I can tell you now it has helped a great deal."

Soon after she filled out the paperwork, she told the group, she and her two daughters were members. One daughter felt free to exercise "in the wellness center in a safe place without judgment," and another daughter joined the swim team.

"My greatest hope in sharing my story is to individualize poverty," Norton, a social worker, said at the time. "Everyone’s take is unique and not always as statistical as we think. Societies can change, and the cycle can change when hope is provided. Thank you for raising funds for the YCares Financial Assistance program. It truly makes a huge impact for so many people.”

Jackson said all applications for assistance are strictly confidential and are available at the welcome centers at the three branches, and online at oceancommunityymca.org/join-the-y/y-cares. The criteria are listed on the online application, she added.

The Y's promise, she said, is to "remain accessible to everyone, regardless of financial status."

"We are here for our community and we’re committed to ensuring that the Y remains open to all," Jackson said, noting that donations to the campaign can also be made online, and can be designated for a certain branch or for the general fund.

For more information about the fundraising campaign or applying for financial aid, visit oceancommunityymca.org.