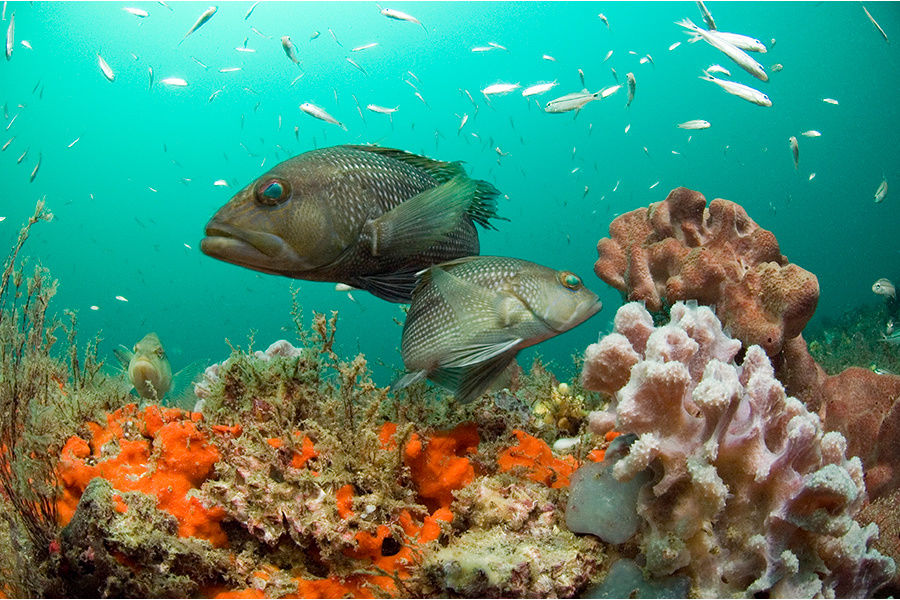 The black sea bass has moved north and competes for food with the Atlantic cod. 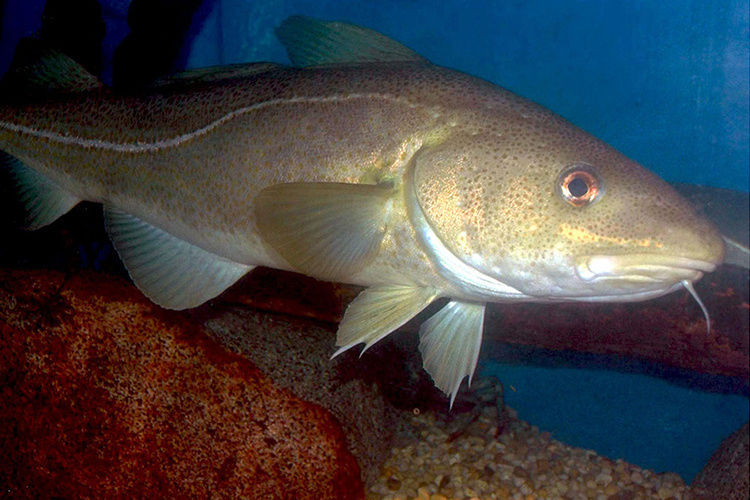 The Atlantic cod population has declined in Rhode Island waters.

The black sea bass has moved north and competes for food with the Atlantic cod.

The Atlantic cod population has declined in Rhode Island waters.

NARRAGANSETT — It will come as no surprise to local anglers that different fish species are now found in Rhode Island waters. In some cases, these fish are displacing ones traditionally found here, and scientists are trying to understand which species pose the greatest threat to the native marine populations of Narragansett Bay.

Students presented some of the findings Thursday at the University of Rhode Island Graduate School of Oceanography. The talks on the bay's marine food web were part of the monthly Bay Informed series sponsored by Rhode Island Sea Grant and open to the public.

Scientists have looked at changes at both the bottom and the top of the food web, analyzing fluctuations in populations of organisms at the bottom, like plankton, and of fish at the top level such as striped bass.

The preferred approach now, however, is ecosystem-based management, in which researchers look at entire ecosystems, including humans, rather than at individual components.

“You can’t really look at what’s happening to a system as a whole unless you know how that system is connected to each other,” Heinichen said.

“The next step is, add some numbers to it,” Heinichen said. “This is usually the step where we have to go out and collect some data, do a more thorough literature review. Sometimes, all these numbers don’t exist and the best you can do is a qualitative model, but the ideal is a quantitative model.”

Quantitative models calculate the population numbers of different organisms and measure the rates of change. In Narragansett Bay, one of the most significant changes in recent years has been an increase in the population of the striped sea robin, a fish that wasn’t found in Rhode Island waters in the 1960s and '70s, but has spread northward as ocean temperatures have risen. Striped sea robins, not to be confused with the native northern sea robin, are remaining in Rhode Island waters for longer periods, too, from April to the end of October.

Heinichen and other researchers studied striped sea robins’ diets last summer. It turns out that the spiny fish will eat practically anything, including the larvae of fish like winter flounder, a species in decline.

“While sea robins are not economically valuable, they’re not a fish that people normally target, they were eating a lot of things that people do care about,” Heinichen said. “…And we think that some of this overlap between the larval stages of these commercially-important fish like winter flounder, summer flounder, black sea bass, we even found a cod earlier in the year, that changing residence time of sea robins, the fact that they’re coming here a little earlier and they’re staying later, is changing what prey they overlap with in the bay.”

Master’s candidate Nina Santos presented research on the changing populations of cod and black sea bass. Atlantic cod populations have not recovered from overfishing in the 1990s, and their numbers remain at historic lows. The warming ocean is another contributing factor since cod prefer cool waters, but Santos said there is now an additional threat: black sea bass.

“Black sea bass distribution has changed over the last few decades,” she said. “They’re originally from the mid Atlantic bight region and they’re moving northward as waters have warmed.”

Black Sea bass are expected to be major competitors with cod for resources in southern New England waters, so Santos said it was important to understand how the diets of the two species overlap. Researchers analyze stomach contents of the fish as well as samples of muscle and liver. Small ear bones called otoliths are also collected because, like tree rings, they show a fish’s yearly growth as well as environmental conditions.

For more precise dietary data, researchers use isotopes, which provide chemical fingerprints of the organism's diet.

The data collected so far point to competition for food between cod and black sea bass, one that the cod is expected to lose.

“The diet data does suggest that there’s evidence of resource competition between the two species for benthic crustaceans, aka crab, and isotope data suggests that cod and black sea bass would be directly competing for resources during the summer, and this is important, because this is when black sea bass are expected to be most abundant and when cod may be undergoing thermal stress,” Santos said.

The greatest density of black sea bass is now found in Rhode Island Sound, but the quota for the fish has not caught up with the population shift.

There is a modest fishery in Rhode Island, but the Atlantic States Marine Fisheries Commission, which sets the quotas for the states based on the overall quota determined by the federal government, has allocated a greater catch to the more southern states.

"Because sea bass were so historically southern, a lot of the high quota and the high catch was reserved for states more southern than Rhode Island," Santos said. "...It's definitely something the fishermen here will keep, if they catch and if they have the permits for. And, it's delicious, so you can find it in restaurants and fish markets."

Athlete of the Week: February 8th

Sponsored by Antonino Auto Group: This school year The Westerly Sun will be selecting a high school Athlete of the Week. Voting closes on Tuesday at 9am and the selection will be announced on Thursday. The nominees for the week ending Feb. 8 are:

Letter: Country is far better because of Trump

Letter: Thank you to the WARM Center for 'Pass the Guitar'

Meeting to be held on Rhode Island airport's master plan