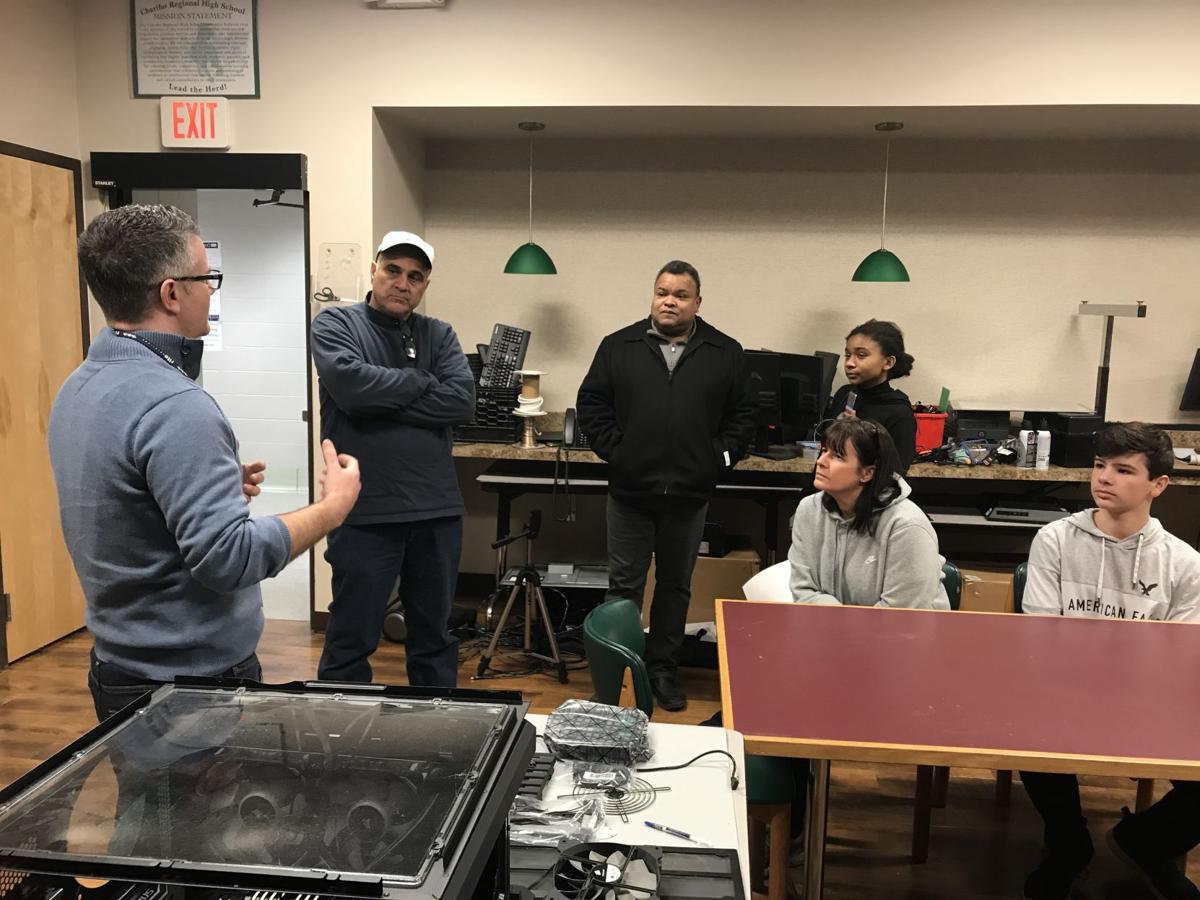 Computer science instructor David Landi explained his program to a group of prospective students and their parents Wednesday at the third annual Chariho Tech open house.Cynthia Drummond, The Westerly Sun 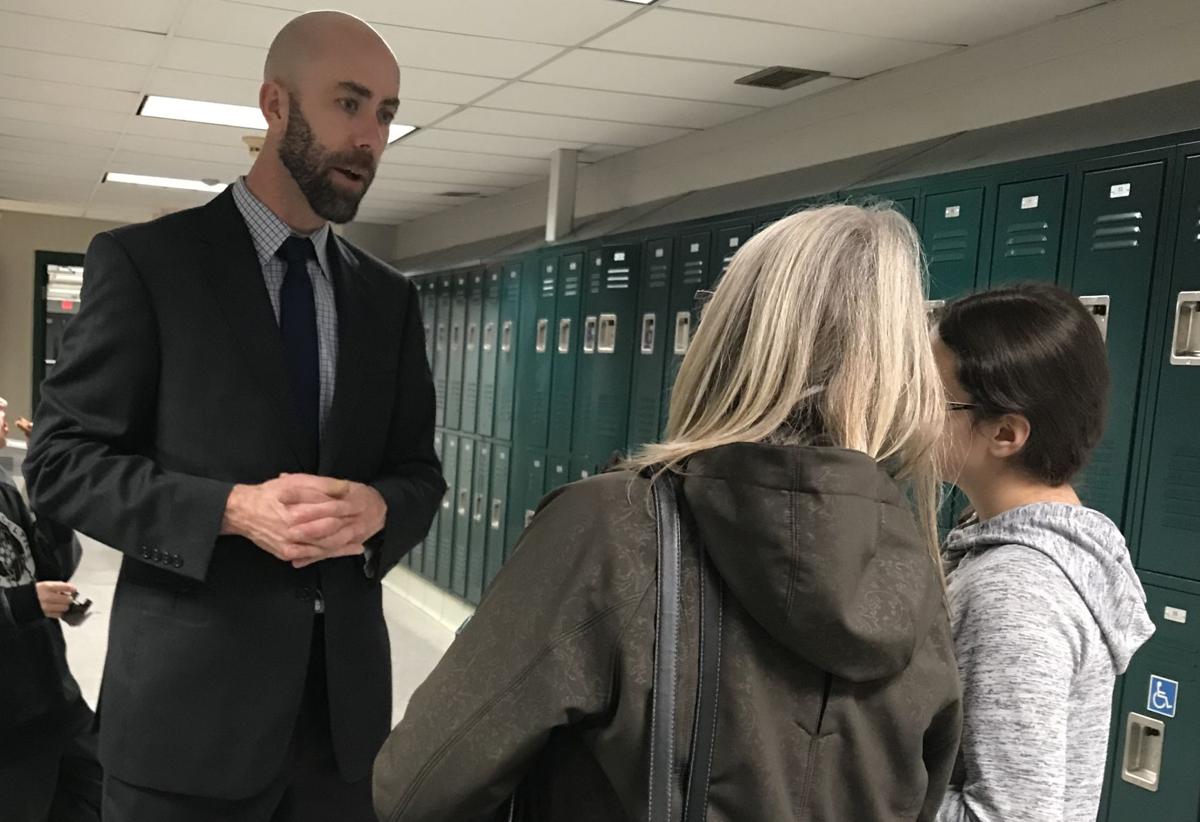 Chariho Tech Director Gerald Auth greeted students and their parents Wednesday at the third annual open house. The event is an opportunity for families to learn more about the 22 career and technical programs offered at the school. Jan. 15, 2020. Cynthia Drummond, The Westerly Sun 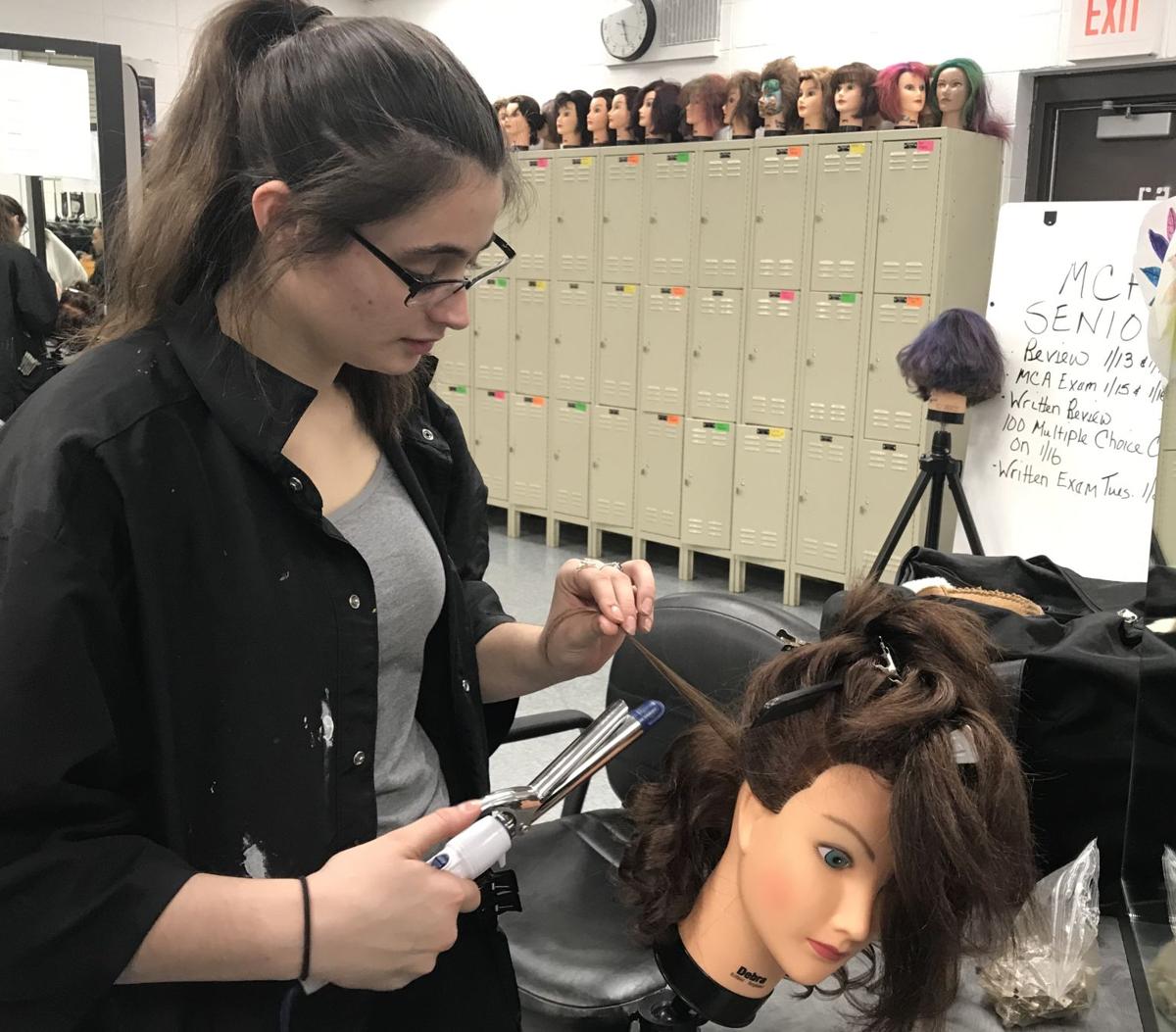 Christa Holland, a junior in the Chariho Tech cosmetology program, prepared to welcome prospective students and their families at the annual open house on Wednesday, Jan. 15, 2020. Cynthia Drummond, The Westerly Sun

Computer science instructor David Landi explained his program to a group of prospective students and their parents Wednesday at the third annual Chariho Tech open house.Cynthia Drummond, The Westerly Sun

Chariho Tech Director Gerald Auth greeted students and their parents Wednesday at the third annual open house. The event is an opportunity for families to learn more about the 22 career and technical programs offered at the school. Jan. 15, 2020. Cynthia Drummond, The Westerly Sun

Christa Holland, a junior in the Chariho Tech cosmetology program, prepared to welcome prospective students and their families at the annual open house on Wednesday, Jan. 15, 2020. Cynthia Drummond, The Westerly Sun

This year, it seemed that more families than ever took advantage of the opportunity to meet teachers and students in the career and technical center’s 22 programs, which begin in ninth grade.

“People want their kids to learn a skill and they know that they can come here and still go to college,” Auth said.

Chariho Tech, one of 10 regional career and technical centers in Rhode Island, attracts students from throughout the southern part of the state. In recent years, however, the school has faced increased competition from other districts, which have begun offering their own career and technical programs. Chariho has responded by launching an aggressive public outreach effort, which has included a beefed-up social media presence.

Auth said the open house was the most effective outreach of all.

“We can put up billboards, we can go on social media, but it's just getting the parents and the kids in here to see what we have to offer,” he said.

Students from each program were on hand to greet the families and talk about what they’d learned.

In the cosmetology department, Christa Holland, a junior, was using a curling iron to style a red wig.

“I really love it,” she said. “I’ve been coming here for four years now and I’ll get a license when I get out of here, and I’m going to go to a professional makeup school to get another license.”

A large group of parents and students gathered in David Landi’s computer science classroom to ask questions about the program. Seniors Kyle Johnson of Charlestown and Mark Wightman from Hope Valley were greeting the visitors.

Johnson plans to join the U.S. Air Force when he graduates. He said he would use what he had learned at Chariho.

“It’s been by far my most favorite class that I’ve done throughout high school,” he said. “Originally I was thinking more towards computer stuff, but now I want to go into the Air Force and be a pilot, but I’m still learning stuff that will help me toward those career choices.”

Wightman intends to study computer science in college. “I’m feeling very prepared for college through this," he said. “We’ve gotten multiple certifications that we would have gotten in college. I feel like I want more kids to get into this kind of stuff, you know?”

The Holt family from Richmond was preparing to check out the engineering program.

Craig Holt said he wanted Wyatt to find a career he was happy in. “For me, it’s all about making sure he’s doing something that makes him happy, and that is a stable job where he can control his own destiny,” he said.

Emma said she was deciding between the criminal justice and culinary programs.

Rebecca Schmid and Emerson Flynn traveled from South Kingstown to see what Chariho has to offer.

Schmid said she thought her daughter would do well in the criminal justice program.

“This girl, she argues any point she wants at home, so I see trials in her future,” Schmid said. “We wanted to check out the program tonight because she really isn’t excited about going to our high school next year. We’ve heard wonderful things about this place.”

Criminal justice instructor Robert Wild said there was a lot of interest in his program.

“We’re getting a lot of people in here, a lot of interest in law enforcement and the criminal justice program, which is good,” he said.

The Vacca family of Westerly was considering Chariho Tech for their daughter, Brooklyn, who is interested in a health career.

Michelle Vacca explained that her daughter was interested in the new medical pathways program at Westerly but they had decided to explore the Chariho program.

“My sister used to be the principal here and she highly recommended coming to Chariho,” she said. “She’s definitely been a big influence in us coming to check out Chariho for Brooklyn. She’s thinking P.T. or O.T. [physical therapy or occupational therapy]. She’s been a competitive gymnast and has had a lot of body parts worked on so she feels like she could be helpful to other young athletes.”

Applications for next fall’s semester are being accepted until Feb. 15. More information is available at: www.charihotech.chariho.k12.ri.us.