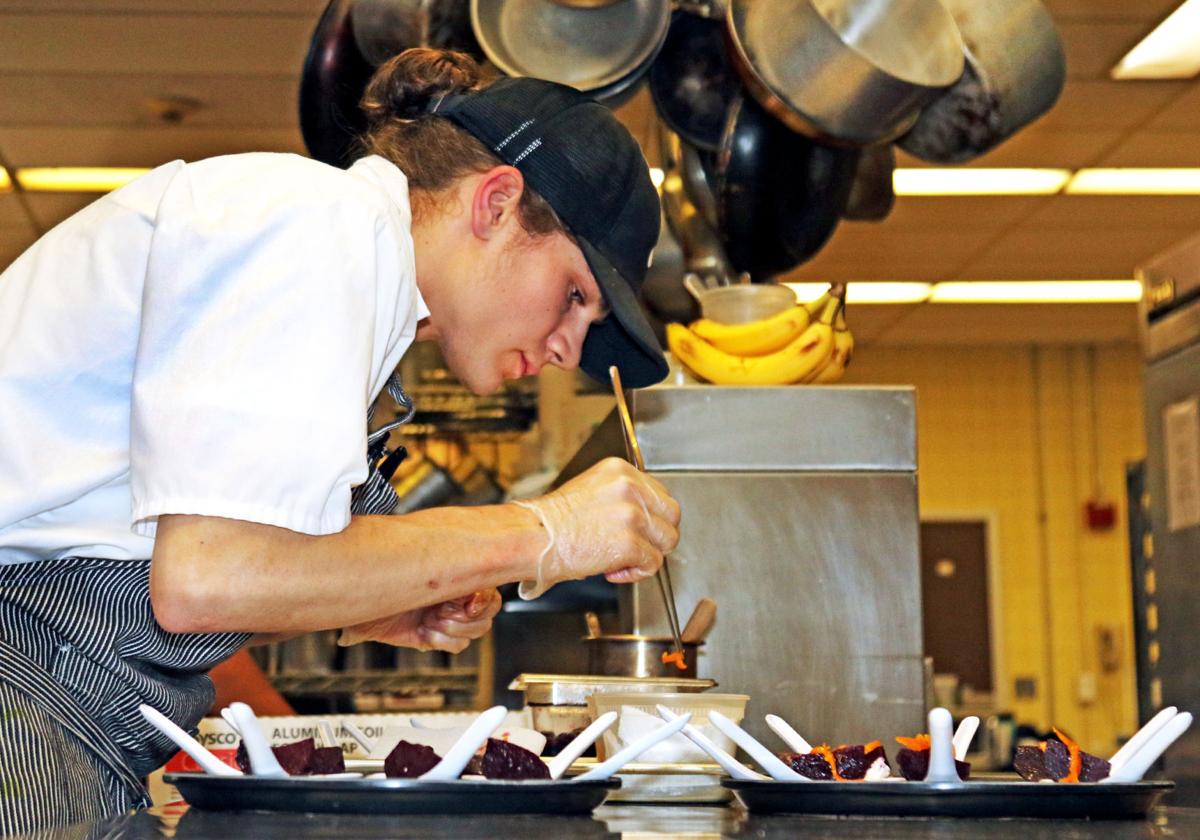 As part of his 10-course tasting menu, Chariho senior Joel Desrosiers prepared a dish of ricotta, marinated beets, confit orange peel and mint leaves. Desrosiers served the dinner to a group of invited guests in the Chariho Tech dining room on Wednesday, May 1, 2019. Harold Hanka, The Westerly Sun 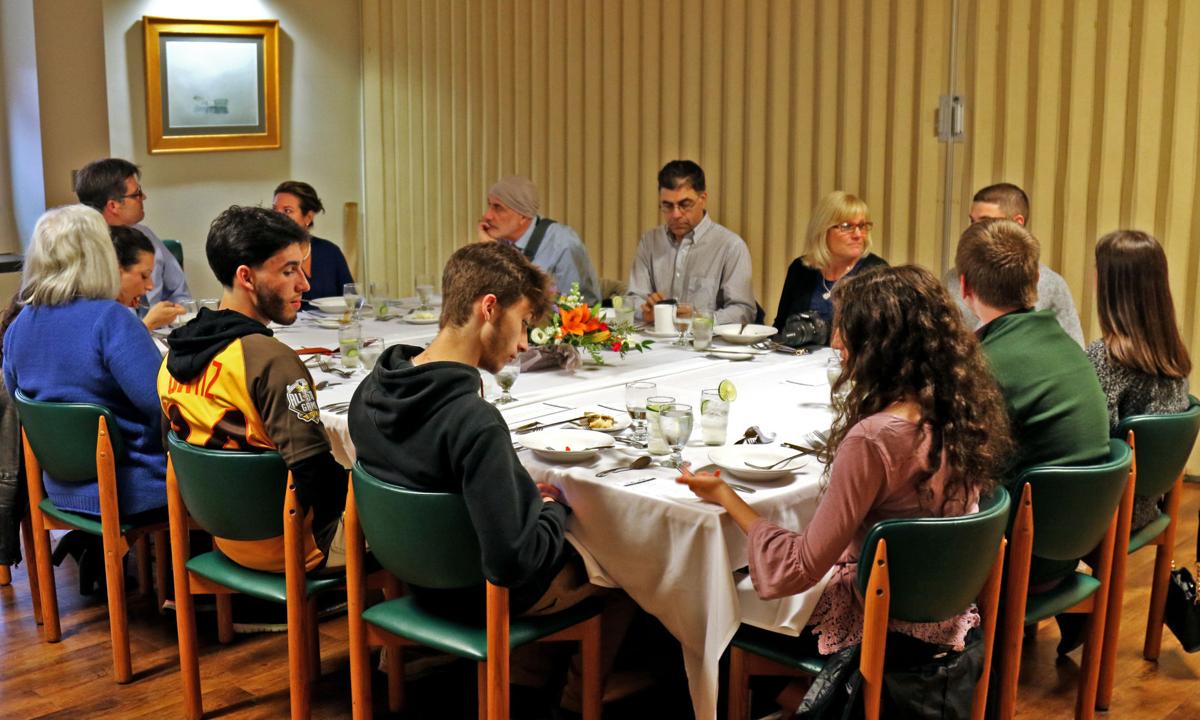 Chariho senior Joel Desrosiers prepared and served a 10-course dinner to a group of invited guests in the Chariho Tech dining room on Wednesday, May 1, 2019, as part of the independent study component of his graduation requirements. Harold Hanka, The Westerly Sun 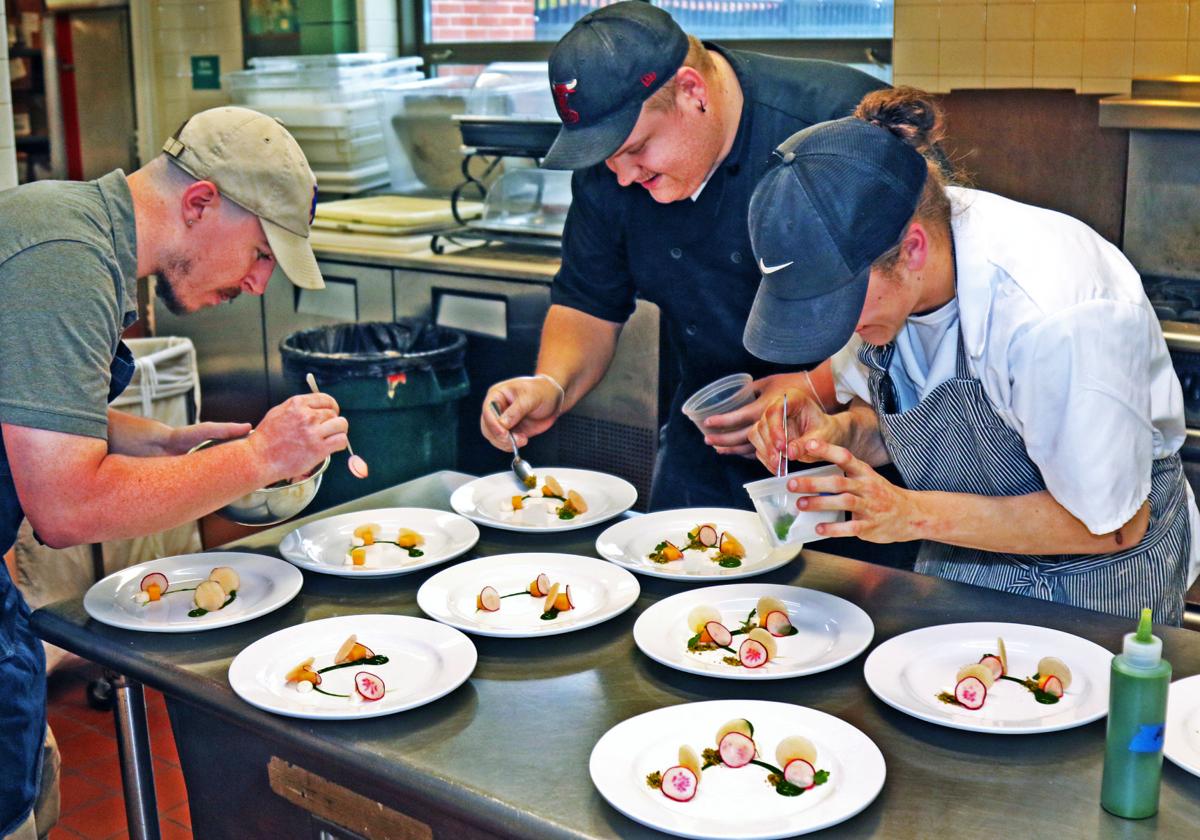 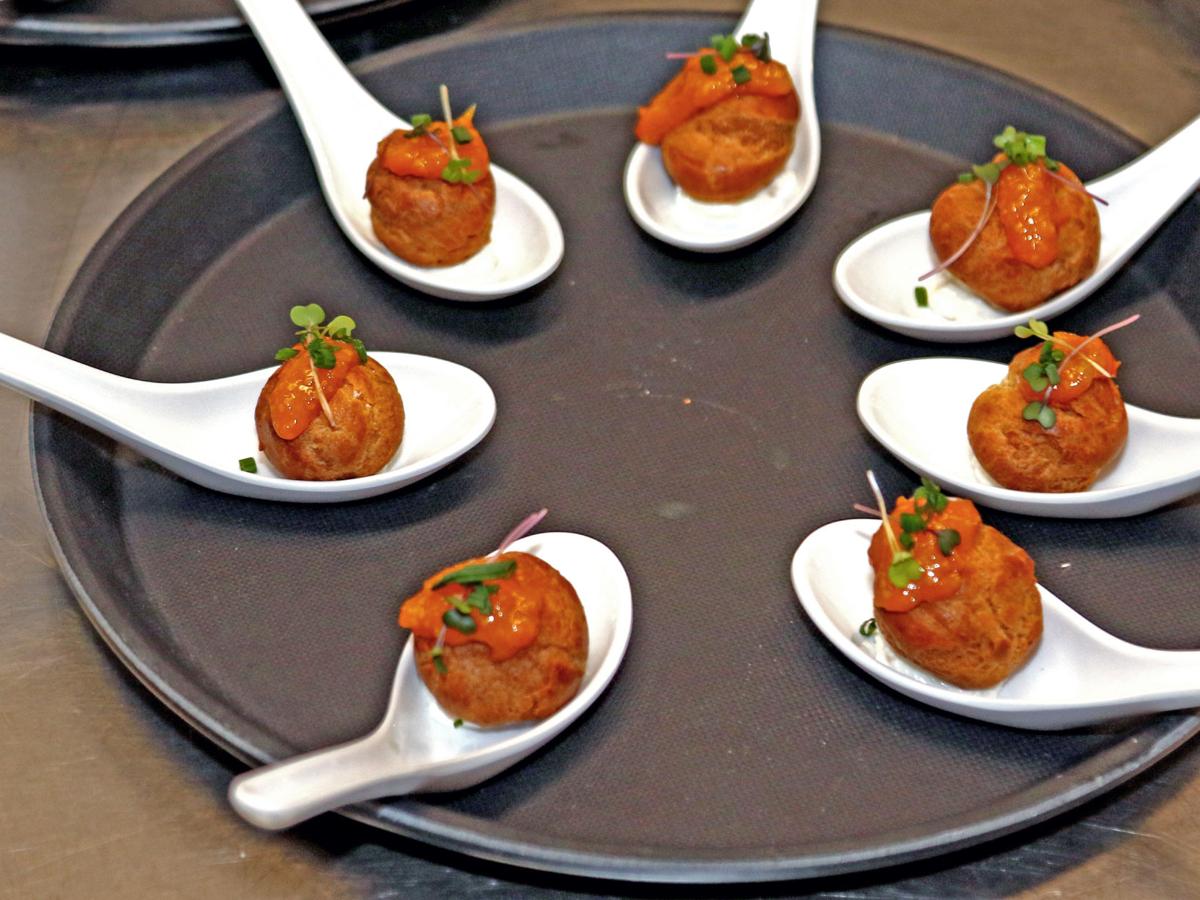 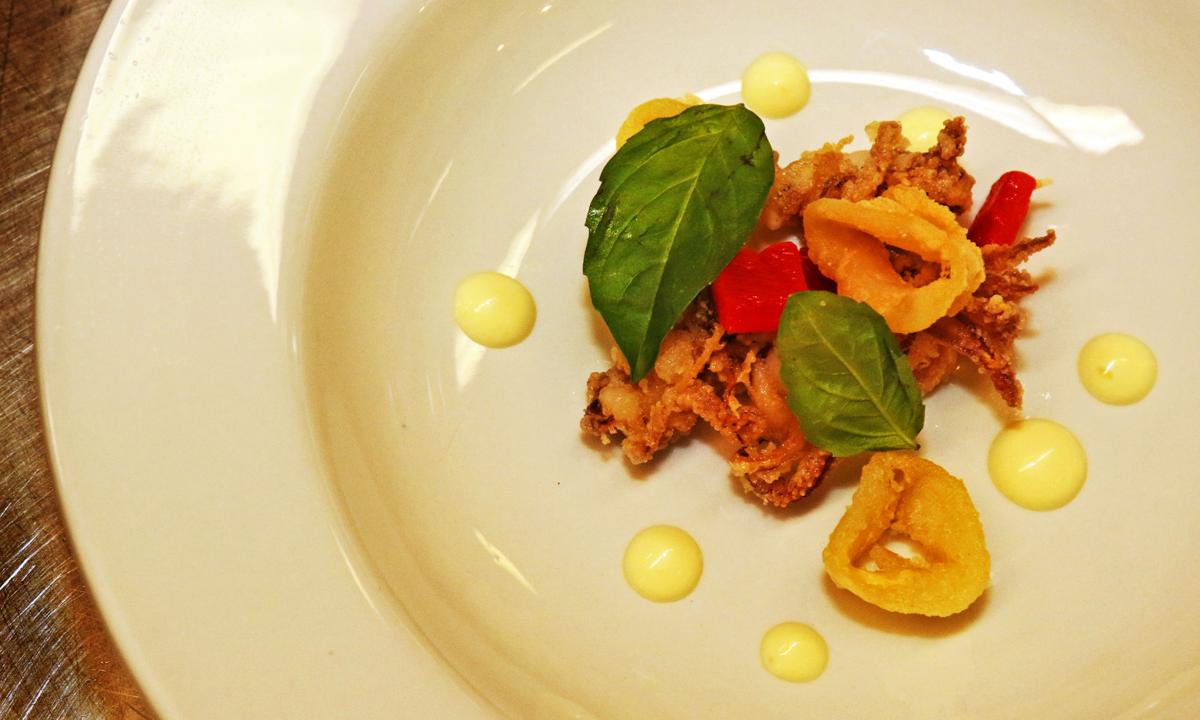 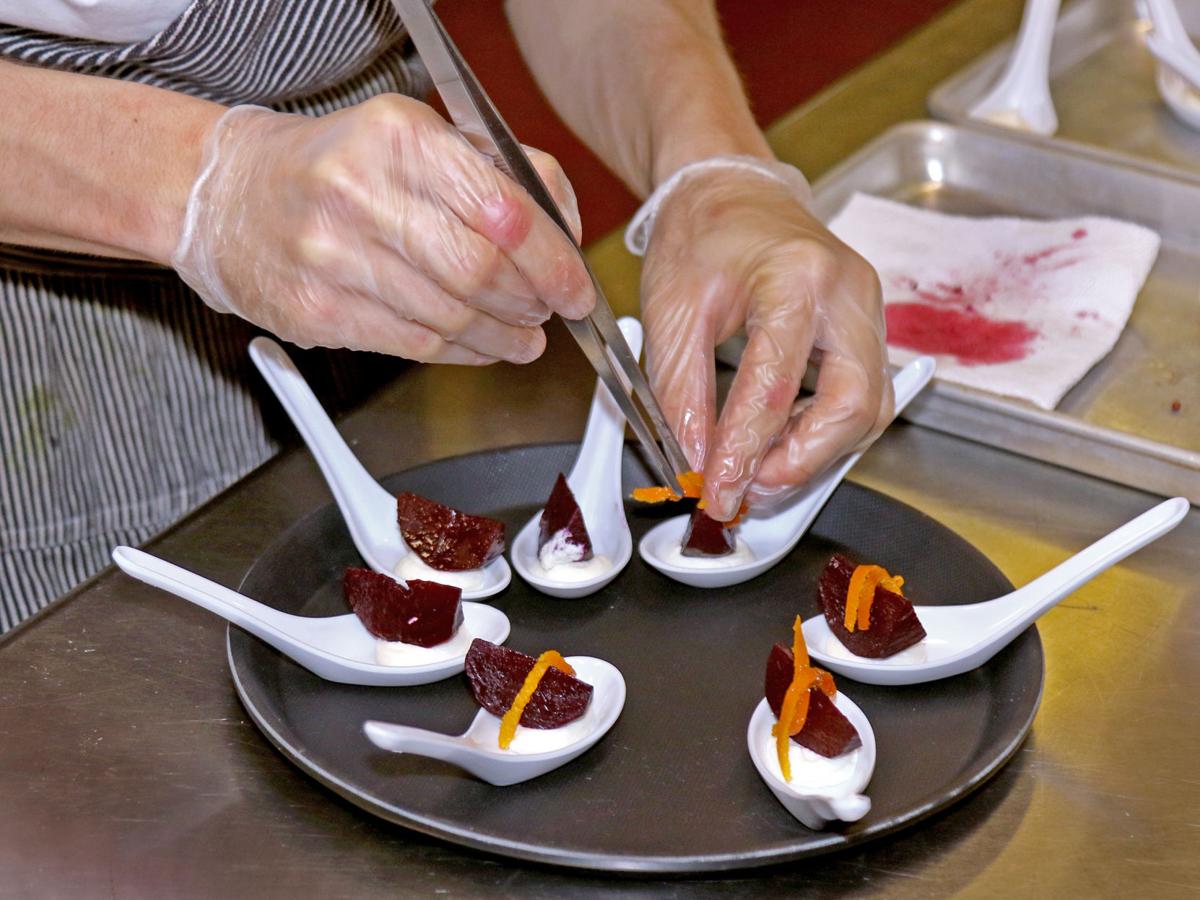 As part of his 10-course tasting menu, Chariho senior Joel Desrosiers prepared a dish of ricotta, marinated beets, confit orange peel and mint leaves. Desrosiers served the dinner to a group of invited guests in the Chariho Tech dining room on Wednesday, May 1, 2019. Harold Hanka, The Westerly Sun

Chariho senior Joel Desrosiers prepared and served a 10-course dinner to a group of invited guests in the Chariho Tech dining room on Wednesday, May 1, 2019, as part of the independent study component of his graduation requirements. Harold Hanka, The Westerly Sun

WOOD RIVER JCT. — Joel Desrosiers worked feverishly in the Chariho Tech kitchen Wednesday evening, preparing to serve the 10-course tasting menu that would be the culmination of his independent study program.

Independent study, which can last from three months to an entire semester, allows students to focus on an area of interest not covered in the regular curriculum. The program, which involves learning new material and skills, must be approved by a guidance counselor, an independent study coordinator and the assistant principal. At the conclusion, the student makes a presentation, in this case, a dinner, to a review panel.

Spas said Desrosiers was the first student to focus on food.

“This is a first, I believe, in independent study history, a 10-course tasting menu by one of our very own Chariho Tech students,” she said. “What is really exciting about this for me is to be able to see a student’s independent study come to life and the hard work that he’s put in, to see the end result in a professional dining experience like this.”

Ricci said Desrosiers’ program was what the district was aiming for with the independent study program. “If they have a passion about something, they should be able to pursue it while they’re in high school,” he said.

The idea, Mackenzie said, is to help students develop their passions so they don't simply coast through their final year of high school.

“In many ways, what Joel is doing tonight is reflective of the type of experience we want to create for every student and he’s one of the first where we’ve said ‘commit yourself completely during one of your school days to the thing that you’re passionate about and we’ll find ways to validate that with credit, and you can take the core classes that you need to graduate on the other days,’” he said.

Waiting for the dinner to begin, Joel’s mother, Beth, held up her phone to show a photo of Joel when he was 6, wearing a chef’s hat that was far too big for him. The photo hangs in the family’s kitchen.

“I think we just always involved him in cooking, right from the start,” she said. “I’m totally used to seeing him cook, but I’m nervous for him, that everything turns out right”

Joel’s father, Brian, said he had a pretty good idea of what his son would be serving.

“It’s been in my refrigerator,” he said. “He’s been testing it at home.”

Desrosiers’ friends, fellow seniors who had all happily partaken of his meals, said they were looking forward to the dinner.

“I heard about some of the things that he’s making, so I’m pretty excited about it,” Amy DiSalvo said. “I think it’s the perfect fit for Joel, because he just loves cooking and he’s really good at it.”

Lucas Santos, who is on the lacrosse team, missed a game so he could attend the dinner.

“He’s one of a kind,” he said. “We had a game tonight and I’m actually here supporting my friend.

“He’s like my little brother,” Ryane Hart said. “Got to be here to support him. I’ve bought Joel ingredients before to make me food and it’s something he likes to do so we’ll just go to his house and he’ll cook some food.”

Hunter Emond said he was particularly fond of Desrosiers’ Bananas Foster, a version of which just happened to be on that evening’s tasting menu.

“Wow. Amazing,” he said. “He did everything, showed us the little flame thing, all the tricks — beautiful. I’m expecting big things. Very big things.”

The menu, consisting of 10 small plates, began with Joel’s own breads with smoked or caper butter, moved through cantaloupe salad, a savory pâte à choux, calamari and monkfish, paused with a palate-clearing ginger sorbet and continued to a chicken consommé, and a short rib. The meal concluded with the much-anticipated Bananas Foster, presented as a crepe cake with a rum ice cream and lastly, a strawberry mousse encased in a shiny, dark chocolate sphere with rhubarb chips, rhubarb jelly and a chocolate crumble.

Pausing in the kitchen when the service ended, Reilly said she and Desrosiers had been working on the menu since January, but she noted that her student had also picked up other important skills along the way.

“It was a fun, very educational journey,” she said. “You need a lot of leadership skills, a lot of organizational skills that we worked on. Being responsible for yourself and your team is really important, so I think there’s a lot of life skill development.”

Desrosiers already has extensive experience in professional kitchens and currently works at the Back 40 restaurant in North Kingstown and at the Meadow Brook Inn in Charlestown. Meadow Brook owner Gabe Rizzo showed up to lend a hand in the kitchen.

“I think he did an excellent job,” Rizzo said. "He did a very good job. He should be proud of himself.”

Desrosiers finally emerged from the kitchen, to a loud round of applause.

“This was such a professional, elevated experience,” Spas told him. “It blew my mind.”

“I feel relieved,” Desrosiers said. “I was mostly concerned about the amount of food I had. I wasn’t sure I was going to be able to feed everyone, but we pulled through. We had to change some things on the fly, but that’s how it goes in the restaurant industry.”

PHOTOS: Signs of life in Misquamicut as state beach reopens

As casinos start to reopen, state puts up COVID-19 warnings