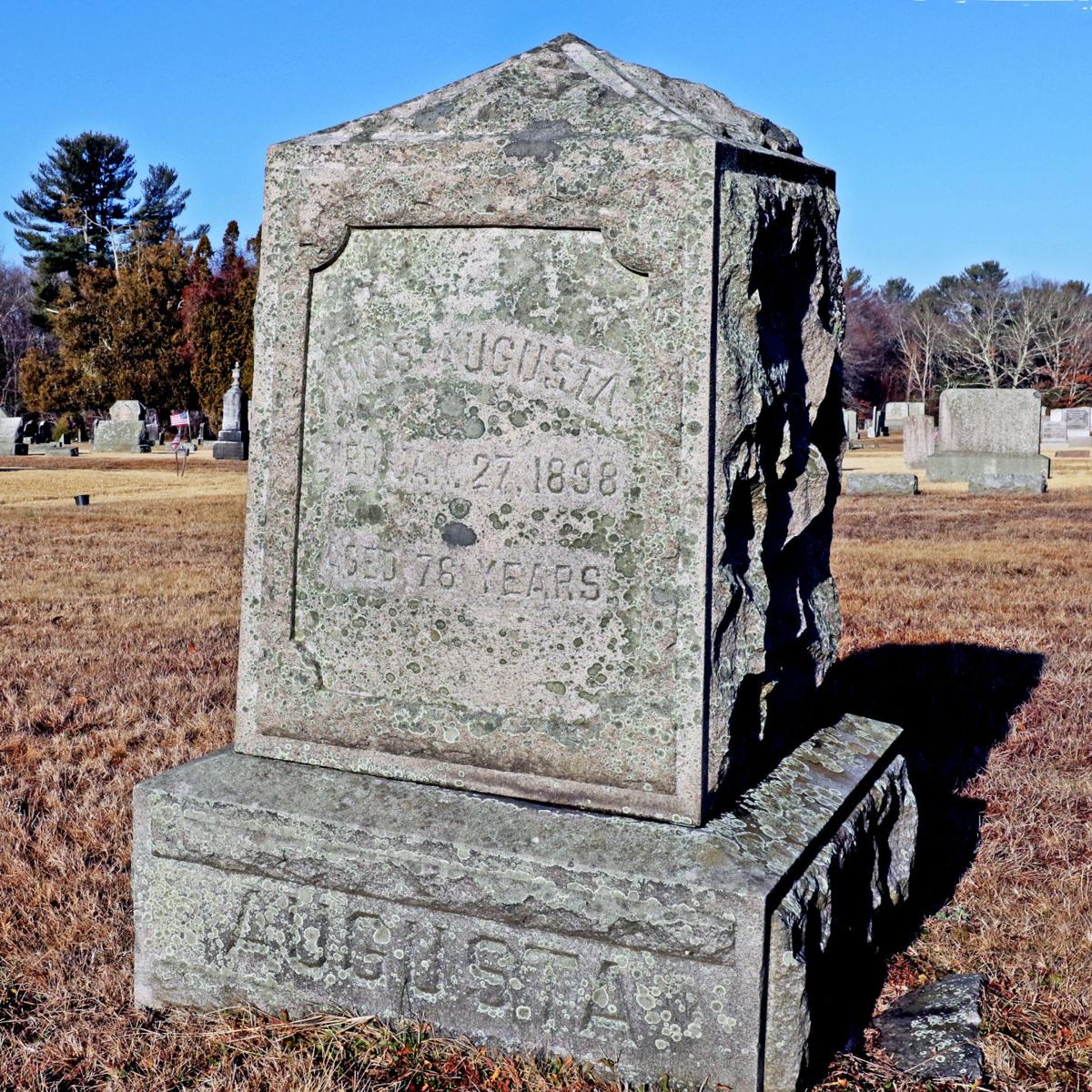 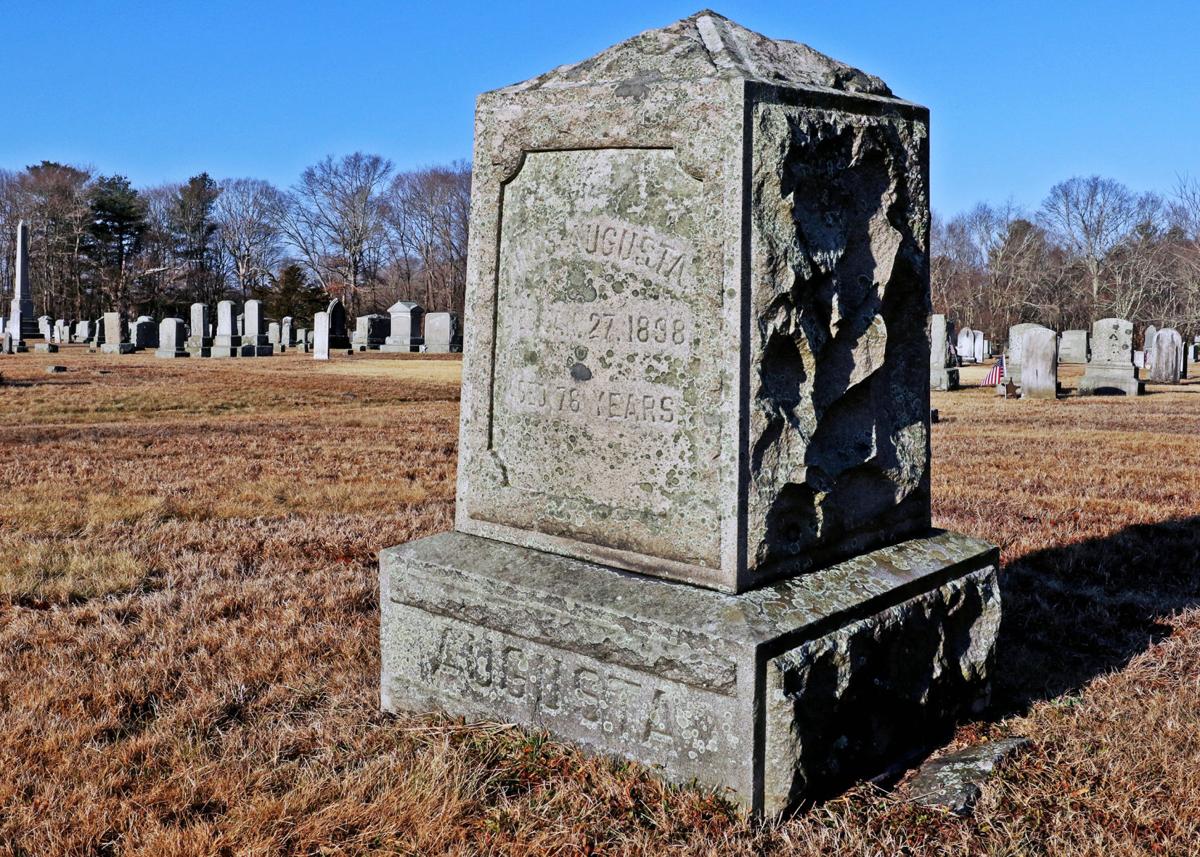 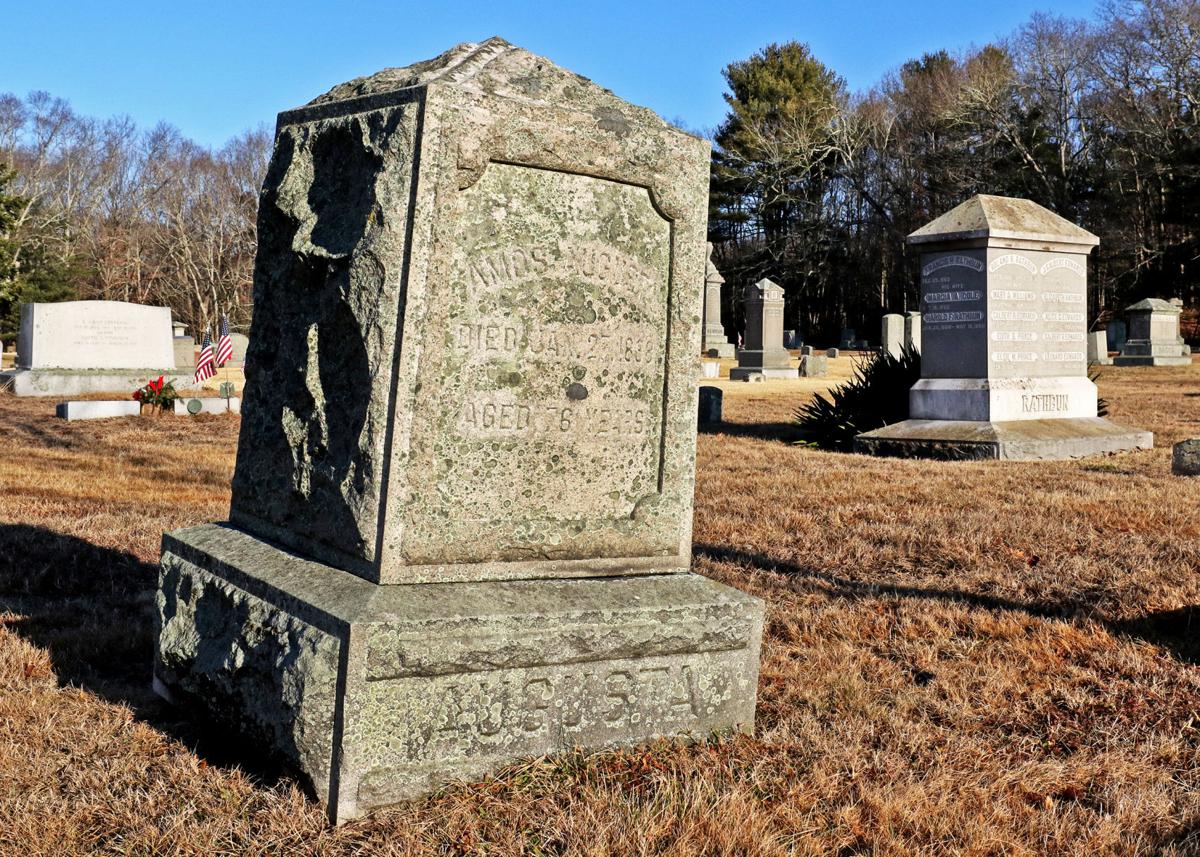 HOPKINTON — In the Oak Grove Cemetery in Ashaway, there is a headstone marking the grave of Amos Augusta, a slave who was born in Virginia, sold to another slave owner and eventually freed by the Emancipation Proclamation when he was about 40 years old.

Augusta ended up living in Hopkinton, where he began attending the local elementary school so he could learn to read his Bible. Augusta died in January 1898, but Hopkinton historian Lauri Arruda said he has not been forgotten.

“At times when I ride by the cemetery in the summer weather, there is a geranium planted in front of his gravestone,” she said. “I'm not sure who does that.”

The importance of slavery in the development of Washington County will be discussed in an upcoming presentation, “Illuminating History: The Plantation Life of Southern R.I. and South County’s Complicated and Unspoken Role in the Slave Trade.”

The program, consisting of an exhibit, a film, and a series of talks, is a collaboration of Brown University, the Charlestown Historical Society, the Chariho Regional School District and the Cross’ Mills Library. It will take place in March at the library in Charlestown.

Pam Lyons, president of the historical society, said the presentation will illustrate the extent of slavery in southern Rhode Island.

“There has been very little public knowledge of the history of local slavery in this part of Rhode Island and we need to fall into step with other states who are embracing this early period of American history,” she said. “It's amazing to think that back in the latter 17th century and into the 18th, Charlestown, or what would become Charlestown in 1738, held two of the largest plantations in the state of Rhode Island, owned by two very early and prominent families, the Champlins and the Stantons. Although General Joseph Stanton, our first senator to Rhode Island, would go on to perpetuate the abolition of slavery, his ancestors held slaves on their farms.”

Charlestown artist Ana Flores, one of the organizers, said the exhibit will bring the history of slavery in South County to the general public.

"There has been excellent work being done throughout the state on the history of slavery, but these programs and exhibits have taken place mostly in universities and museums,” she said. “These cultural sites can sometimes feel intimidating to some aspects of the public; though they are free to the public, they can be intellectual silos. We wanted our program to take place where the general public would feel welcome.”

Painted in 1940, the mural now hangs in the South County History Center in Kingston.

“In the eighteenth century, South County’s wealth and plantation economy were tied to the wider currents of rival empire building and the changing tides of the sugar industry,” Carrington-Farmer said. “Using Ernest Hamlin Baker’s mural, ‘The Economic Activities of the Narragansett Planters’ as a lens, this talk will explore how the entire operation turned on the ownership of and trade in enslaved workers. The mural depicts enslaved Africans at work; shearing sheep, driving cattle, handling horses, and making cheese. The talk will use a range of sources to flesh out the lived reality of enslaved life, including estate inventories, newspaper adverts, letters, church records, and diary entries.”

Rhode Island was, for a time, the center of the slave trade in New England, a fact that Linford Fisher, associate professor of history at Brown University, said Rhode Islanders often prefer to ignore.

“I think what is true in Rhode Island is true all over New England, which is to say, we have a historical amnesia problem, that Northerners, after the Revolutionary War, after the gradual emancipation acts, began to convince themselves that they had always been on the side of emancipation, had always been on the side of racial equality, and equity, and therefore positioned themselves vis-a-vis the American South as the liberators and emancipators, especially after the Civil War,” Fisher said.

“So those kinds of cultural narratives, in my experience and my opinion, are still quite strong, so you might get a thoughtful Rhode Islander that’s aware of some of the history that contradicts the popular narrative and rhetoric, but I think generally, Northerners, and especially New Englanders, like to see themselves in a post-Civil War and post-Revolutionary War framework of being against slavery.”

In addition to the trade in African slaves, Fisher pointed to another significant aspect of the Rhode Island slave trade, which involved Native Americans.

“The enslavement of Native Americans, in Rhode Island especially but all over New England … did a double duty at least,” he said. “First of all, it provided labor when you enslaved local native groups and individuals, but secondly, and probably more importantly, it began to slowly clear the land for white colonial settlements.”

That land, from Warwick to Charlestown, was known simply as "Narragansett" in the 18th century, because it was the territory of the Narragansett Indian Tribe. Most of the transfer of that land to the white colonists occurred after King Philip’s War, which ended in 1676.

Lorén Spears, director of the Tomaquag Museum and a member of the Narragansett Tribe, will be one of the speakers at the March event. Spears said that in enslaving the Narragansett people, the colonists were able to neutralize them.

“Narragansett people were sentenced to slavery in the Caribbean, but also enslaved in our own homeland, and that continues to create historical trauma that has befallen our people and the lack of respect that is there for our community,” Spears said. “We were dispossessed and forcibly assimilated and slavery was one of those means of forced assimilation, because it displaces you, not only from your family, but from your community as well as your traditional life ways and values. Slavery was part of that conquest.”

Fisher said it was after King Philip’s War that the clearing of South County for large plantations, and slave trading, began.

“The clearing of the land coincides with the entrance of New England and Rhode Island into the transatlantic slave trade, so you then have a labor supply at the same time,” he said. “So between 1680 and 1720 is a period of immense growth and development. The land’s being cleared in South County.”

Slave trading and ownership peaked in the colonial period, but after the American Revolution, Rhode Island established itself as an exporter of manufactured goods, textiles, and slaves.“That’s the period, between 1780 and 1808, when they also lead the North American African slave trade,” Fisher said.

“Newport, Bristol-Warren and Providence, those are the slave ports,” Rickman said. “At that time, they had the reputation. These people are running these slave ships and they sell slaves in the Caribbean and the reason for that is, the life span is seven years for a human being. They work you to death in that sun and they do it on purpose to get as much out out of the human being, the African, as you can … People literally died between five and nine years of showing up there.”

While most wealthy Rhode Islanders kept one or two slaves, Rickman said the numbers were much greater on the South County plantations. “There’s been arguments for years whether there were 20 people on those plantations or 220, but there’s more than any place else in Rhode Island,” he said.

The last slave in Rhode Rhode Island died in Jamestown in 1859.

“Slavery really is the backbone of the South County economy,” Rickman said. “Before slavery, it was the poorest region in all of Rhode Island…and then all that wealth from those plantations put it third behind Newport and Providence.”

“We need to take seriously the way in which the past is not just the past, but also in some ways can continue to shape our present and future in ways that aren’t always positive,” he said. “There’s a legacy of slavery, a legacy of racism that if we just put aside, maybe we’re unknowingly replicating it in different ways even today.”

Information on the March event, when it becomes available, will be posted on the Charlestown Historical Society website at charlestownhistorical.org.

In the Easy Chair with Susan Ludwig

Postscripts: Keeping the word of the Lord alive at a small church south of the border