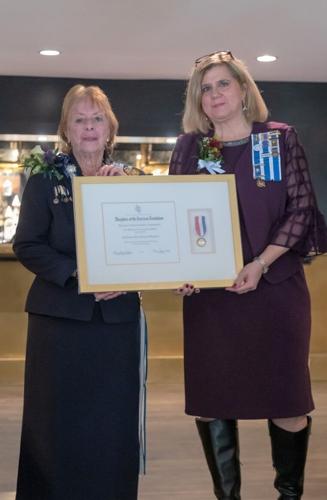 The Phebe Greene Ward Chapter of the Rhode Island Daughters of the American Revolution celebrated the 125th anniversary of its chapter last month by honoring member Barbara Ann Brown Weaver with the prestigious National Society of the Daughters of the American Revolution Historic Preservation Medal at a celebratory chapter luncheon at the historic Shelter Harbor Inn.

The NSDAR Historic Preservation Medal recognizes and honors a person who has done extraordinary volunteer work over a long period of time in establishing a historic district; preserving a local landmark; restoring or preserving objects of historic and cultural significance; establishing or participating in oral history projects; and youth leadership and education, as it pertains to historic preservation, at the regional, state and/or national level.

“The NSDAR Historic Preservation Medal is one of the highest honors a DAR member can attain,” said Phebe Greene Ward Chapter Regent Deirdre White Lee. “Barbara Weaver’s years of service and dedication to leading both the Connecticut and Rhode Island Children of the American Revolution, serving as both chapter regent of Phebe Greene Ward and state regent of RIDAR, and her undying dedication to preserving the historic Varnum House in East Greenwich are just a few of the reasons she was selected for this honor. It was so fitting to present Barbara with the award on the 125th anniversary of our DAR chapter.”

The Phebe Greene Ward Chapter of RIDAR, based in Westerly and serving the surrounding communities, was formed in November of 1896 by Miss Mary Greene, then state regent of the RIDAR. The first meeting was held in the Westerly Library, then called the Memorial Building, at which time the members elected Mrs. Mary Elizabeth Thayer Allen as Chapter Regent. Mrs. Allen was the wife of the then-Lt. Governor of Rhode Island, Edwin R. Allen. The chapter has been meeting monthly since its inception and continued virtually for several months during the pandemic.

Phebe Greene Ward continues to host DAR essay contests for local students, honors veterans, and supports the preservation of several historic homes, including the Varnum House in East Greenwich and the Babcock-Smith House in Westerly. Phebe Greene Ward members also lead the Rhode Island State Society of the Children of the American Revolution.

The Daughters of the American Revolution is a lineage-based organization whose members are descended from the patriots who won American independence during the Revolutionary War. The organization welcomes new members and is happy to support genealogy searches in order to prove ancestral lineage. For more information about the Phebe Greene Ward Chapter or to join the group, visit www.ridar.org/phebegreeneward.

PHOTOS: Hooking up the horses at the Watch Hill Carousel