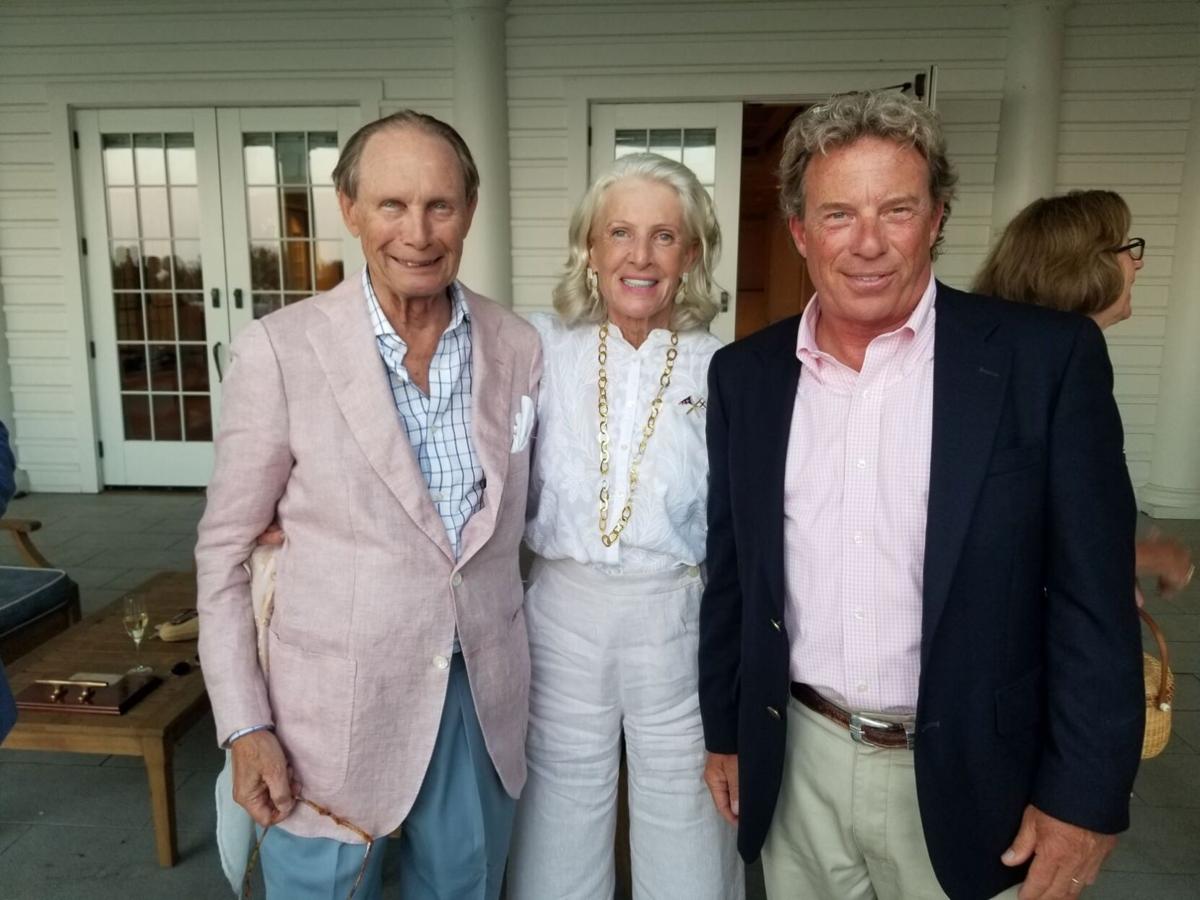 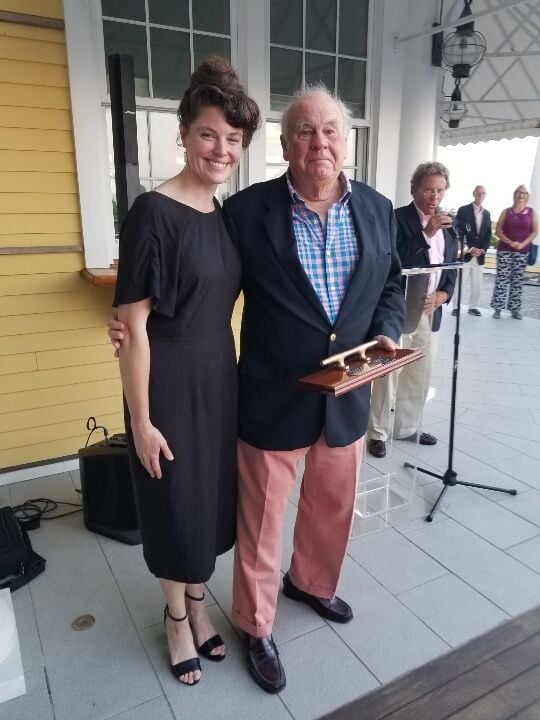 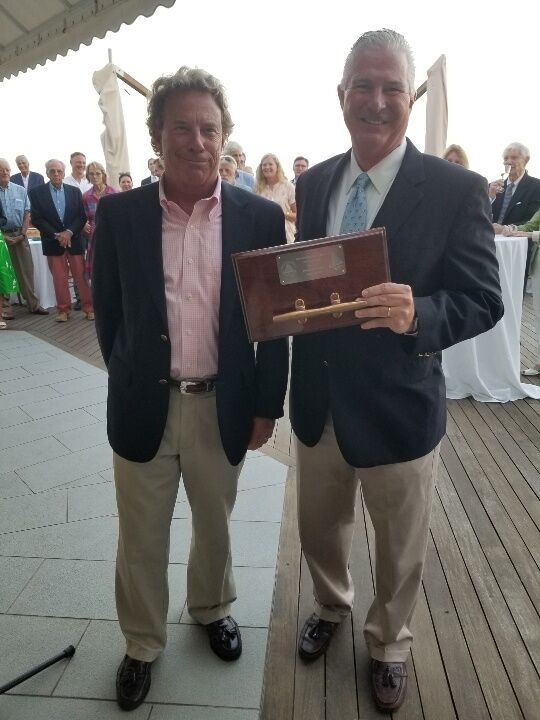 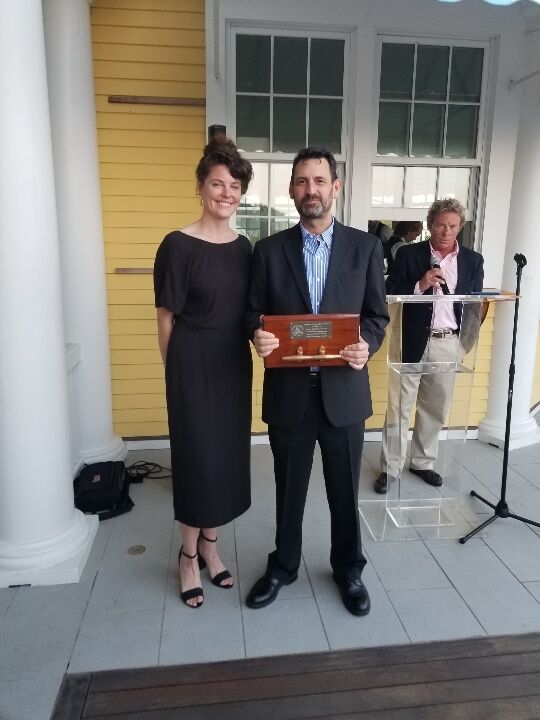 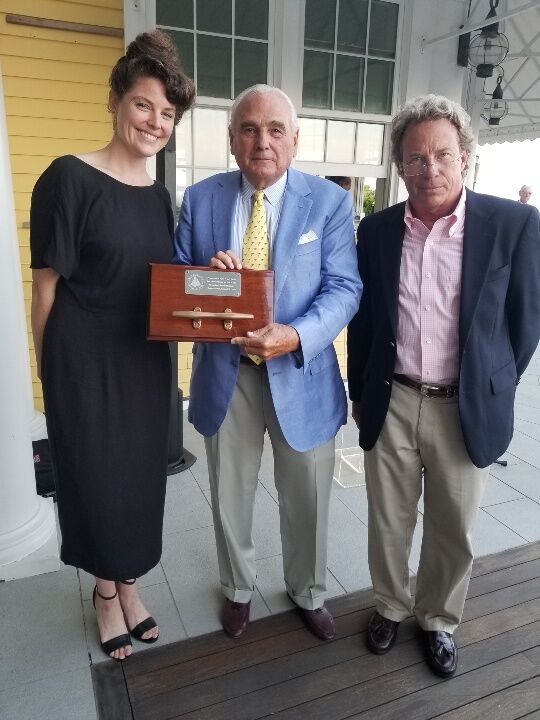 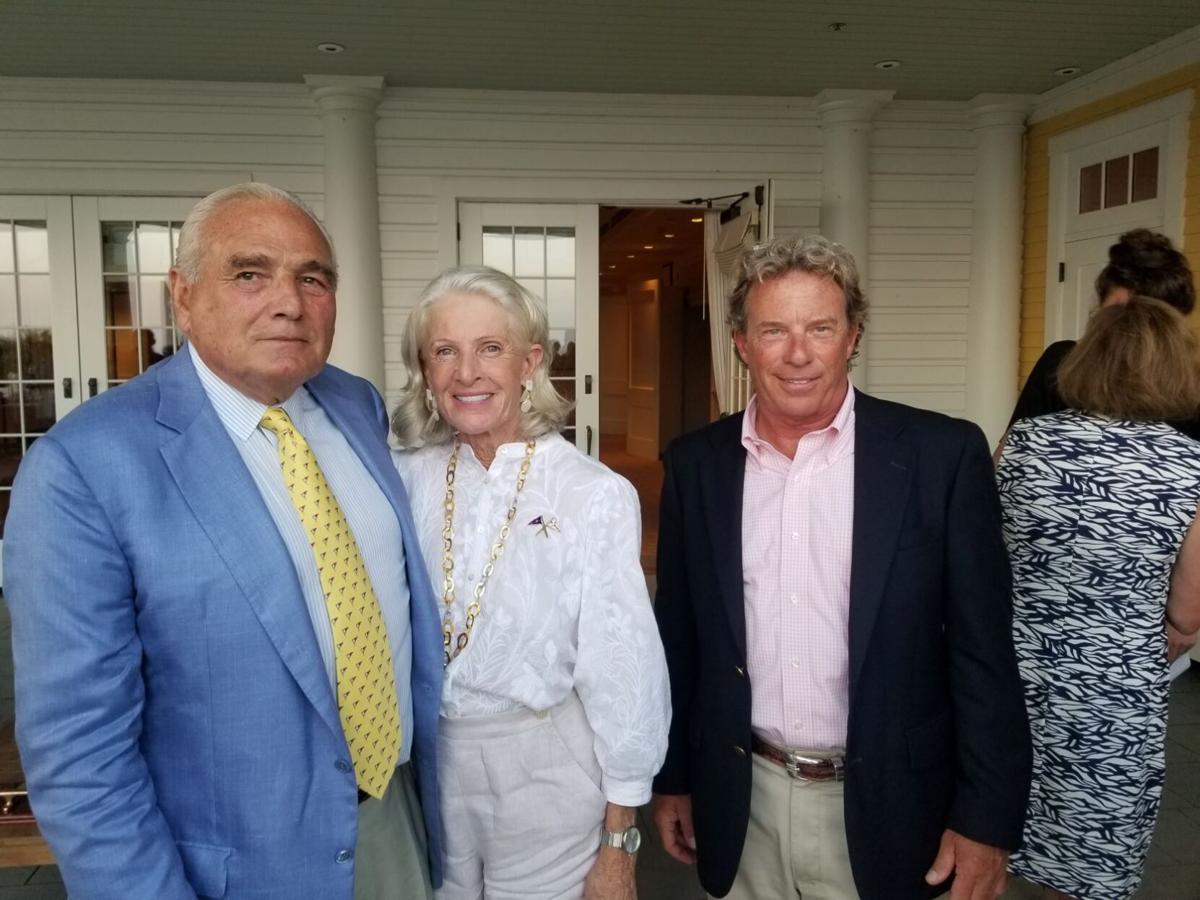 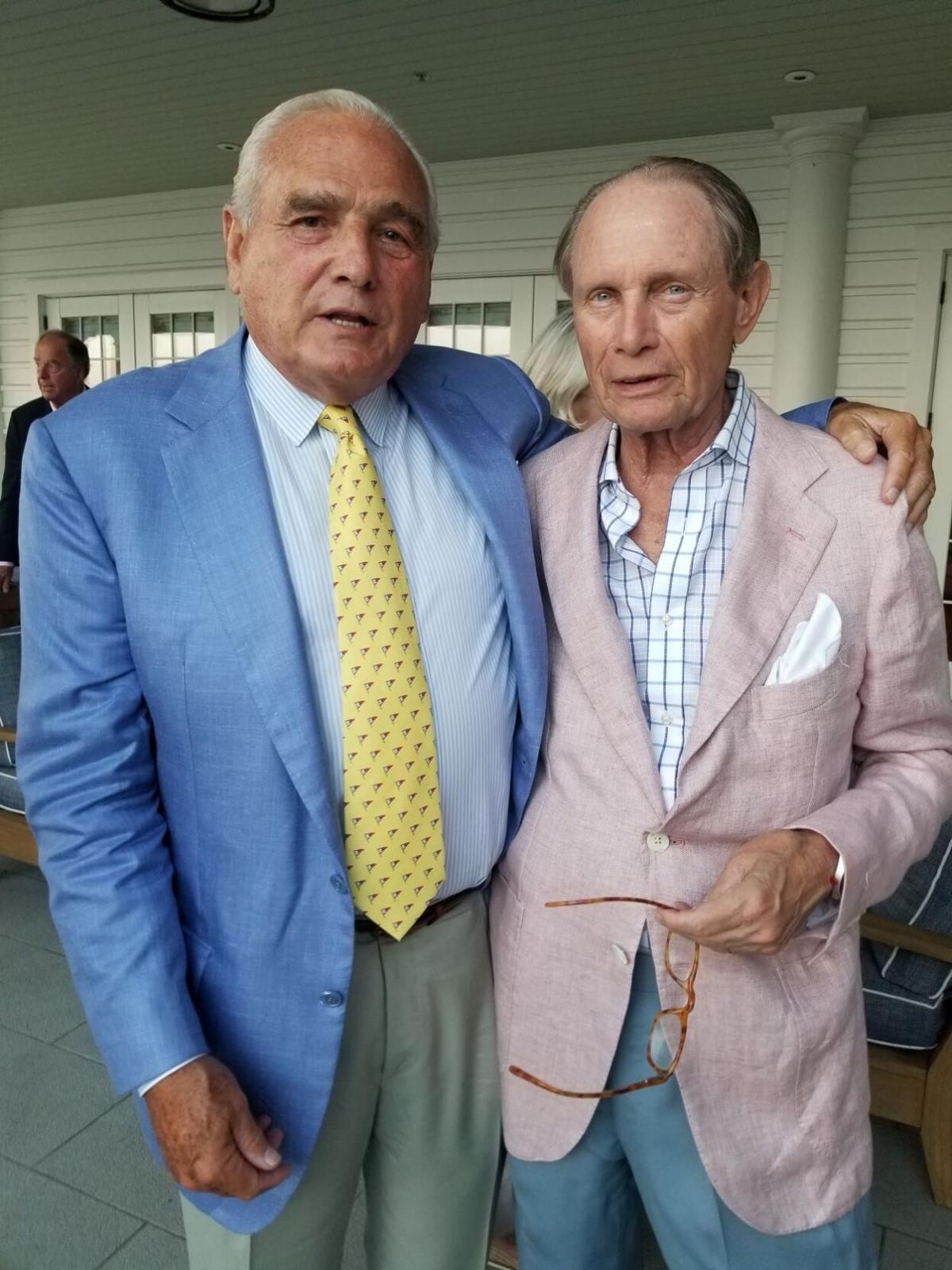 For nearly 100 years, generations of Watch Hill families have shared a special relationship with the Herreshoff Manufacturing Company, the renowned yacht designer and builder based in Bristol, as owners and competitive sailors of the famed one-design racing yacht, the Watch Hill 15.

On a recent August afternoon, the Herreshoff Marine Museum extended the historic bond by presenting the Watch Hill Yacht Club with a new trophy in celebration of the museum’s 50th anniversary. Sponsored by Ocean House, the Herreshoff Golden Jubilee celebrates the museum’s achievements in collection, preservation and education as well as the commitment by Herreshoff yacht owners, past and present, who propel the Herreshoff legacy into the future.

With more than 125 guests in attendance, this reception enabled the museum to honor two sailing legends and museum benefactors from Watch Hill. James “Ding” Schoonmaker, who passed away in January of this year, was “incredibly generous to young sailors and old boats,” Lynn told the audience. An Olympic sailor in his teens, Ding won the Star World Championship in 1975, and earned the Nathanael Greene Herreshoff Award, US Sailing’s highest honor, in 1988. For the museum, he contributed funds to restore Capt. Nat’s personal yacht, Clara, and recognized the opportunity to preserve the first Watch Hill 15 ever built, FIREFLY, contributing funds to its restoration after the Muenchinger family donated the boat to the museum. Ding’s widow, Treecie, along with her son, Julian Gage accepted a custom Herreshoff Golden Jubilee trophy in Ding’s memory.

John “Hap” Fauth, CEO of the New York Yacht Club's American Magic syndicate and a three-time world champion in the Maxi 72 Class, was also presented a custom Herreshoff Golden Jubilee trophy for extending Bristol’s dominance in the design and construction of more yachts to defend or challenge for the America’s Cup than any town in the world. An important part of the museum’s own history is the founding of the America’s Cup Hall of Fame in 1992. While the America’s Cup Hall of Fame is international in scope, it is anchored by Herreshoff and Bristol.

Also during the program, in front of many Watch Hill 15 owners and sailors, Lynn and the museum’s curator, Evelyn Ansel, presented the Herreshoff Golden Jubilee trophy to J.B. Daukas, Commodore of the Watch Hill Yacht Club. This was the fourth of 12 trophies to be presented this year by the museum at different yacht clubs. The trophies feature an authentic Herreshoff bronze cleat mounted on a mahogany backboard.

The museum was also able to surprise Watch Hill sailor, Richard Holliday, with a special trophy in honor of his volunteerism with the museum during the Golden Jubilee, and for being an ambassador for the Watch Hill 15 fleet.

In 1922, 11 Watch Hill Yacht Club members went to Captain Nat Herreshoff to ask his advice for a new class of racing yachts. Herreshoff agreed to update his Buzzards Bay 15 design to include a modified Marconi rig. Construction began in August 1922 and Josephine (now Firefly) was sea trialed that December. In the spring of 1923, Josephine and 10 other boats were delivered to the Watch Hill Yacht Club. Eight or nine of those original wooden boats are known to exist, four of them are still sailing in local waters. The first fiberglass Watch Hill 15s were launched in August 1969 with a further improved rig. Twenty-five of these boats were built and all remain in the Watch Hill waters. Twice weekly, 10 to 12 Watch Hill 15s race competitively as one of the best examples of an enduring Herreshoff fleet.

The Herreshoff Marine Museum launched its Golden Jubilee earlier this year with a series of articles on an anniversary section of its website (www.herreshoff.org/50th), including the curious story of its founding in 1971. The jubilee aims to engage sailors across the globe with a special focus on Herreshoff owners, past and present, and Herreshoff one-design fleets that continue to race actively from Maine to Florida. The fleets, such as Watch Hill’s, demonstrate the multigenerational dedication to the boats, and the museum is celebrating the commitment to the Herreshoff legacy with a monthly article in WindCheck Magazine, its official jubilee media partner. Also celebrating its 50th anniversary, the Newport International Boat Show selected the museum as its charitable partner for its upcoming boat show scheduled to take place later this week, from Sept. 16-19 (www.newportboatshow.com).

The museum also hosted an expanded Herreshoff Regatta and Rendezvous in August  will celebrate at the Golden Jubilee Gala on Sept. 30. The museum’s 50th anniversary will conclude with a dinner at the New York Yacht Club in New York on Nov. 18.

Since its founding, the Herreshoff Marine Museum waterfront campus has grown dramatically, starting in 1971 when it had no home but instead consisted of a small fleet of Herreshoff boats, a literal “floating museum.” Today, the museum includes a number of original company buildings, the Herreshoff family homestead, and a modern exhibition building, the Isaac B. Merriman, Jr. Hall of Boats. Named for one of the museum’s earliest benefactors, this exhibit space displays more than 60 Herreshoff boats, steam engines, and an array of artifacts. The Nathanael G. Herreshoff Model Room & Workshop exhibit is a re-creation of Captain Nat’s own model room and workshop, and contains more than 500 original design models, tools and documents. Over the past five years, the museum has delivered STEM-focused experiential education programs to thousands of Rhode Island students. The museum is now partnering with the National Sailing Hall of Fame on an America’s Cup Hall of Fame exhibit at its new Sailing Museum in Newport.

The 50-year history of the Herreshoff Marine Museum has not only preserved this chapter of American ingenuity, it serves as a bridge to the future of boatbuilding, as the Town of Bristol and State of Rhode Island continue to prosper as a cradle of innovation for the maritime community. According to the Rhode Island Marine Trades Association, the state’s marine industry is comprised of more than 1,700 companies employing 13,000 people and generating $2.7 billion in annual revenue.

Atlantic Beach Park celebrates 100 years of fun in the sun

In the Easy Chair with Ashley Dupler

In My Own Shoes: Are you asleep, awake, or ‘woke’?

Postscripts: Sergio Franchi estate, long a musical haven, was once purchased for a song