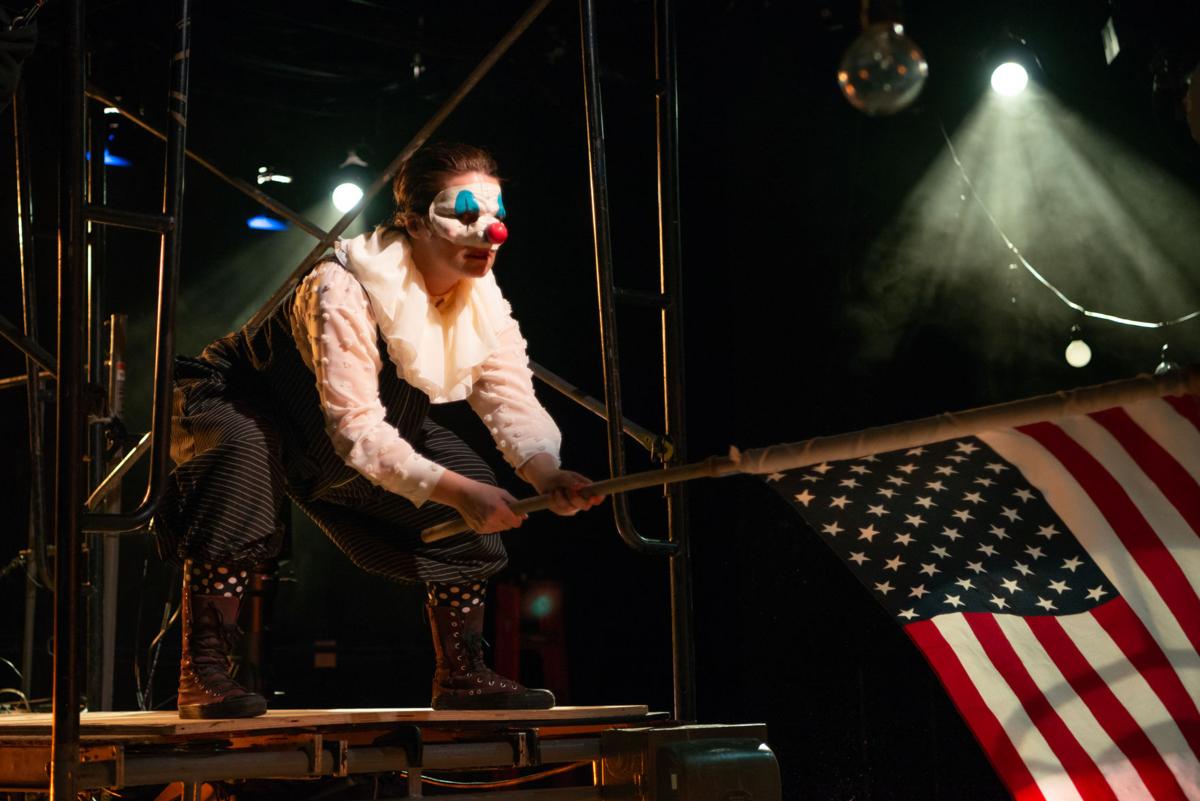 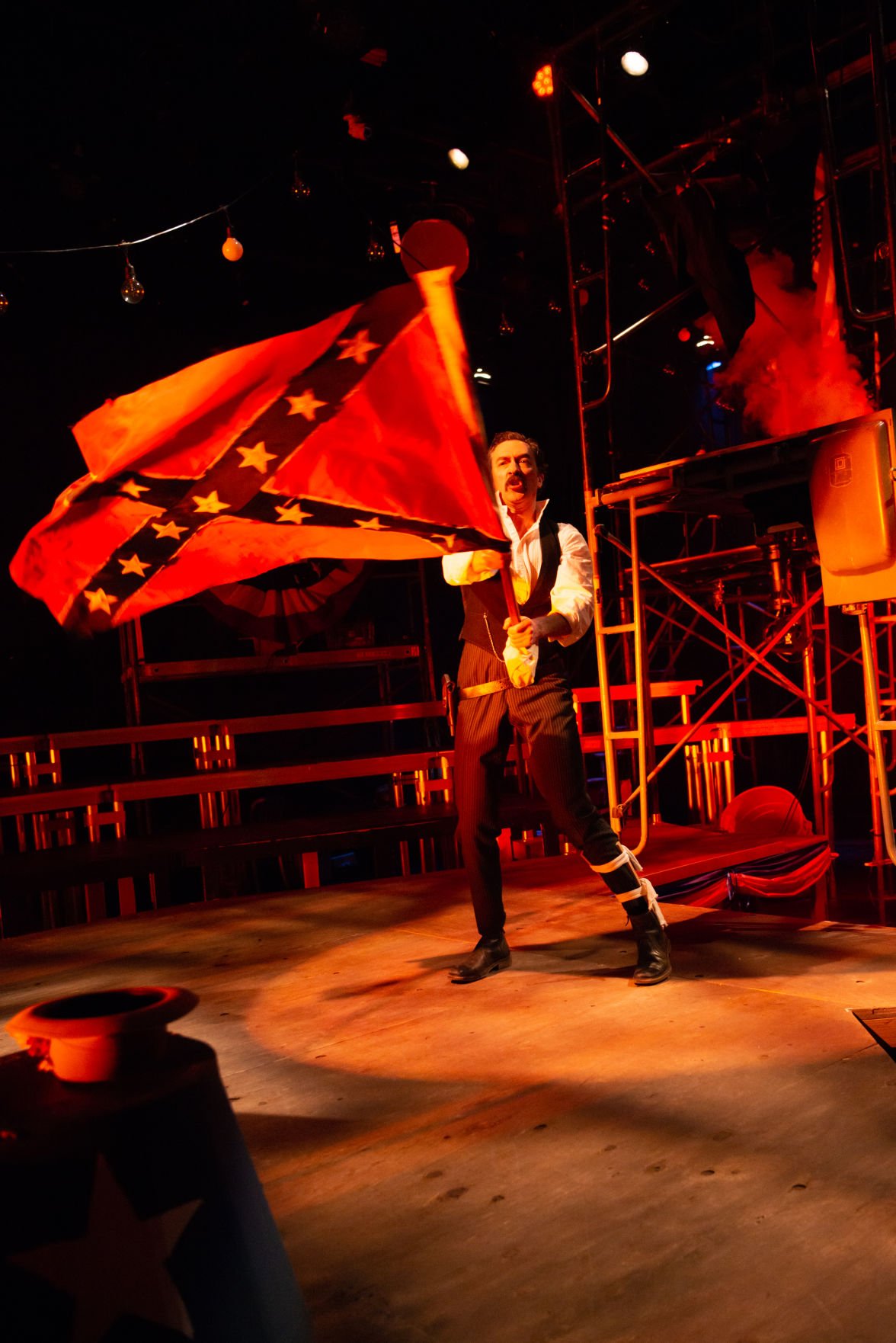 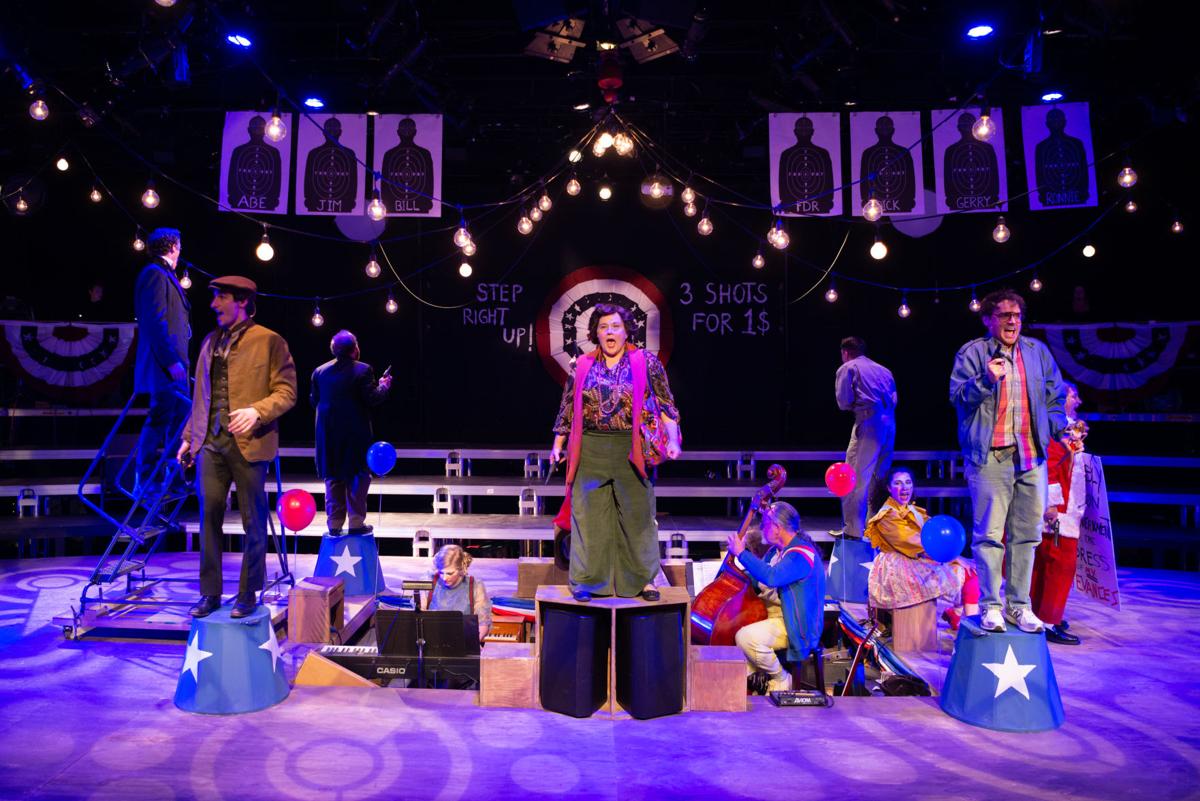 WARWICK — Ladies and gentlemen, step right up — suspend your judgments, cast away your  barometers of normalcy and settle in for one wild, roller coaster of a ride. It's a spectacle alrighty, a veritable three-ring circus ... complete with guns and flags, buntings and bangs, a tricycle, a Santa Claus, a clown and plenty of red, white and blue.

And let's not forget Meg Donnelly's costumes ... nor Michael McGarthy's set ... which are both resplendent with bits and pieces of pure Americana.

I suppose it's not surprising that the Gamm chose to go with the legendary Stephen Sondheim for its first musical, and I suppose it makes sense that "Assassins," a  revue-style extravaganza of a musical set in a carnival-like setting, based on a book by John Weidman, would be the choice to start things off.

"Assassins," which earned five Tony Awards for its 2004 Broadway run, takes a darkly humorous look at the psychology of the nine people — seven men and two women — who either assassinated or attempted to assassinate an American president. In that sense, it's a macabre history lesson as well.

Not your garden variety musical fare.

Gamm artistic director Tony Estrella masterfully directs the musical which moves along rapid-fire — and do I mean rapid-fire — includes an exceptional cast and has moments of genius.

The show begins with the extraordinary Eden Casteel — the gifted former Charlestown resident who for years spearheaded "Quonnie the Musical" — as the Proprietor who, with her exquisite voice and costumes, paves the way for the unusual journey ahead.

The murderers and would-be murderers hop up on circus pedestals, climb up on steel platforms, meander up and down the aisles and meet on stage to sing together, laugh together, encourage one another, taunt one another and cajole one another.

"Everybody's got the right to be happy," they sing, accompanied by a three-member orchestra which is set in a pit the middle of the stage and whose members (Emily Tuttle mostly) often participate in the loony goings-on.

We also get a visit from Emma Goldman (Helena Tafuri) the turn-of-the-century revolutionary, union organizer and birth control, women's equality and free speech advocate, who is said to have inspired Czolgosz to murder McKinley.

Watching Gleadow as Byk in his dingy undershirt and Santa suit bottoms eating a tongue sandwich and drinking a Bud is as heartbreaking as it is disturbing.

Watching Platt (who is brilliant as Booth) encourage Oswald to assassinate JFK is chilling and surreal as is the moment Casteel changes her clown costume to a pink linen Chanel-looking suit.

Call "Assassins" dark humor, call it provocative, call it wild satire, call it madness, call it frightening, call it what you will, but call it a must-see.

WHAT: "Assasins," music and lyrics by Stephen Sondeim, book by John Weidman.

WHEN: Through March 29, various times.