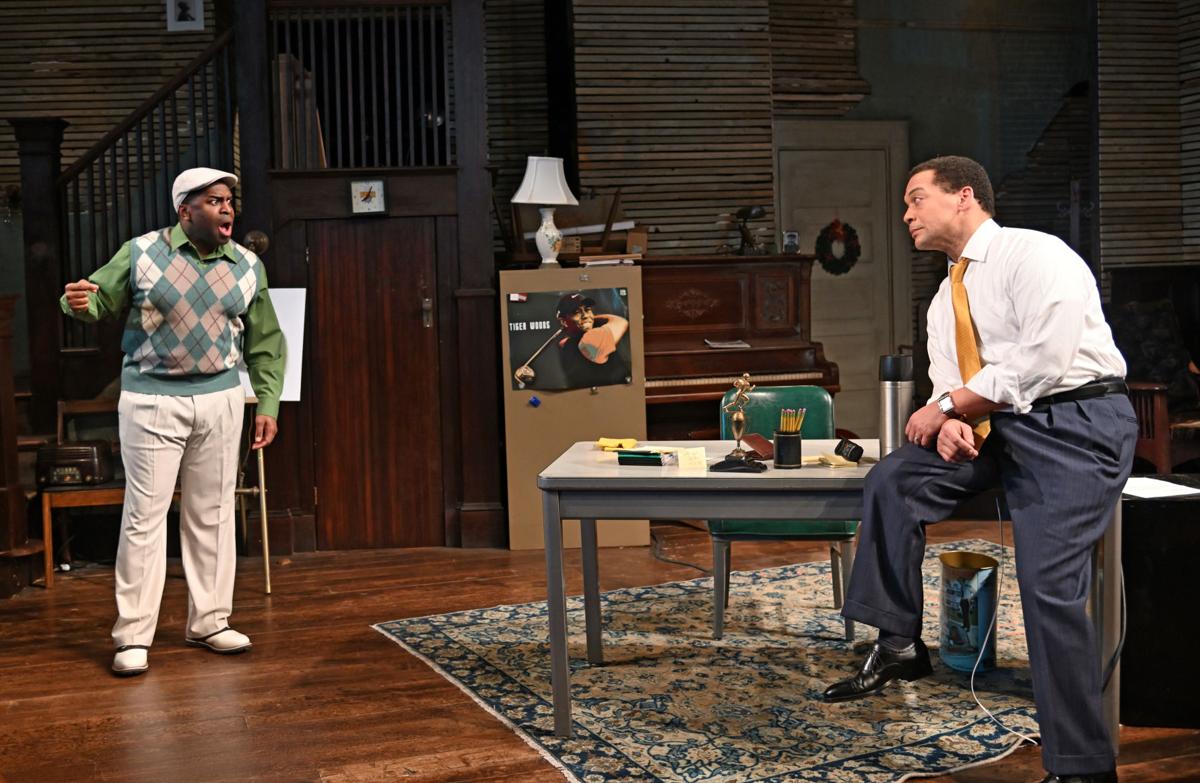 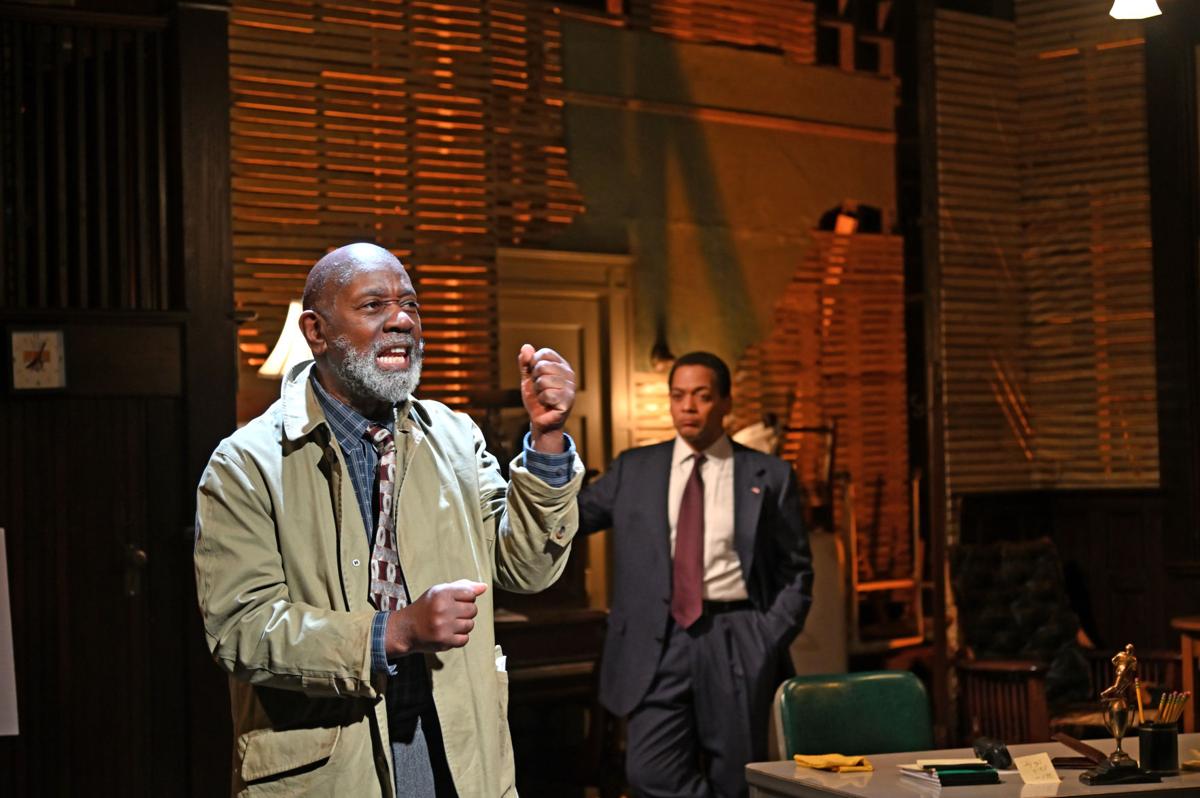 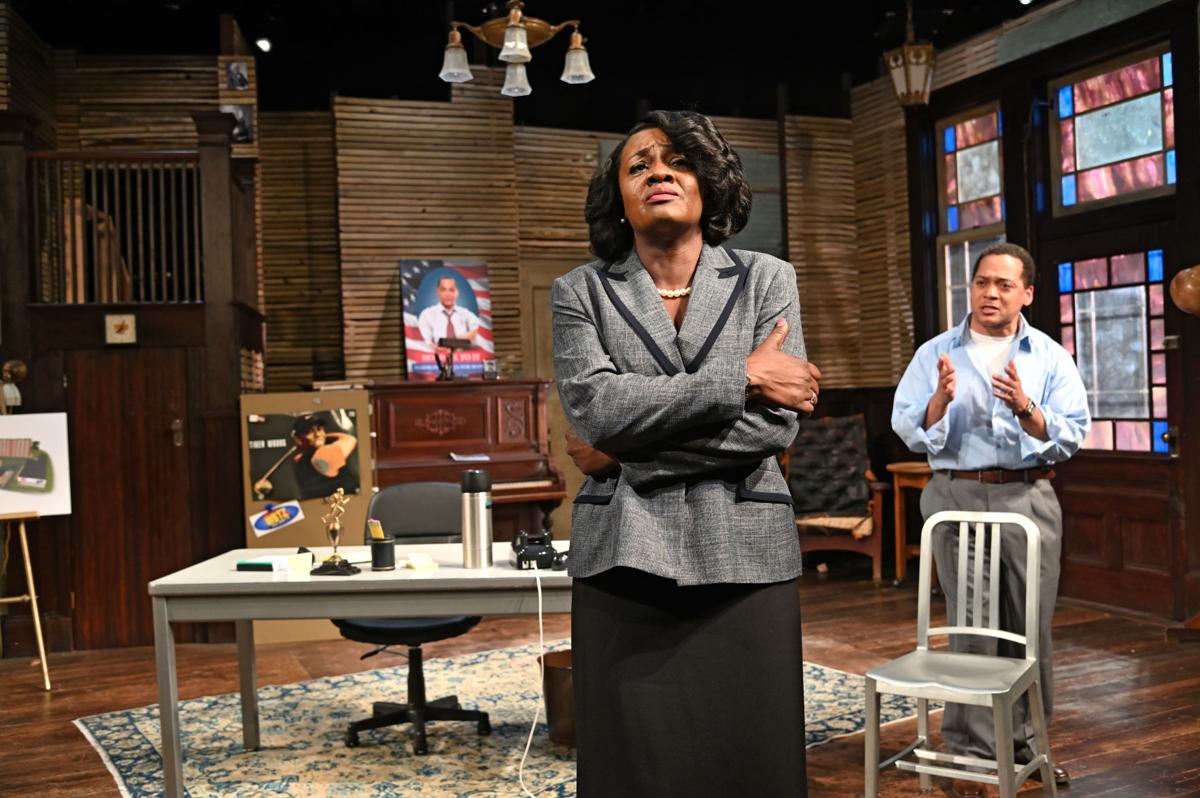 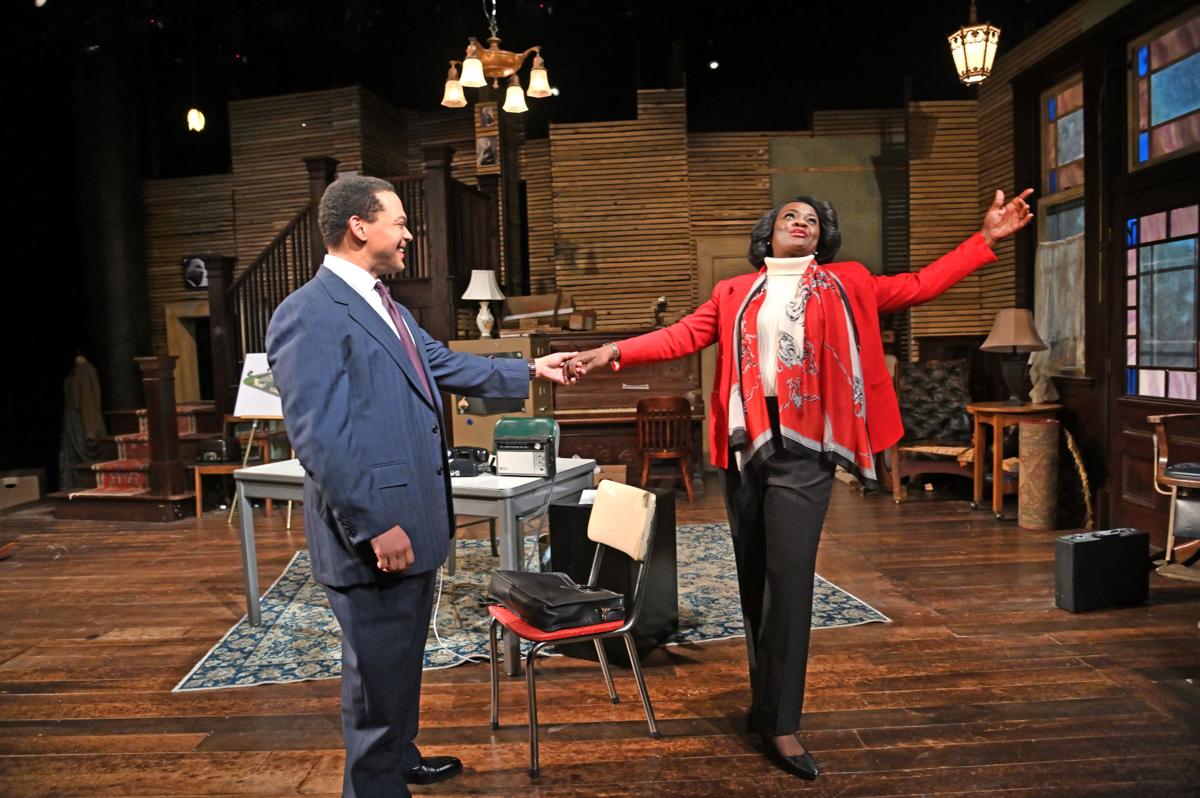 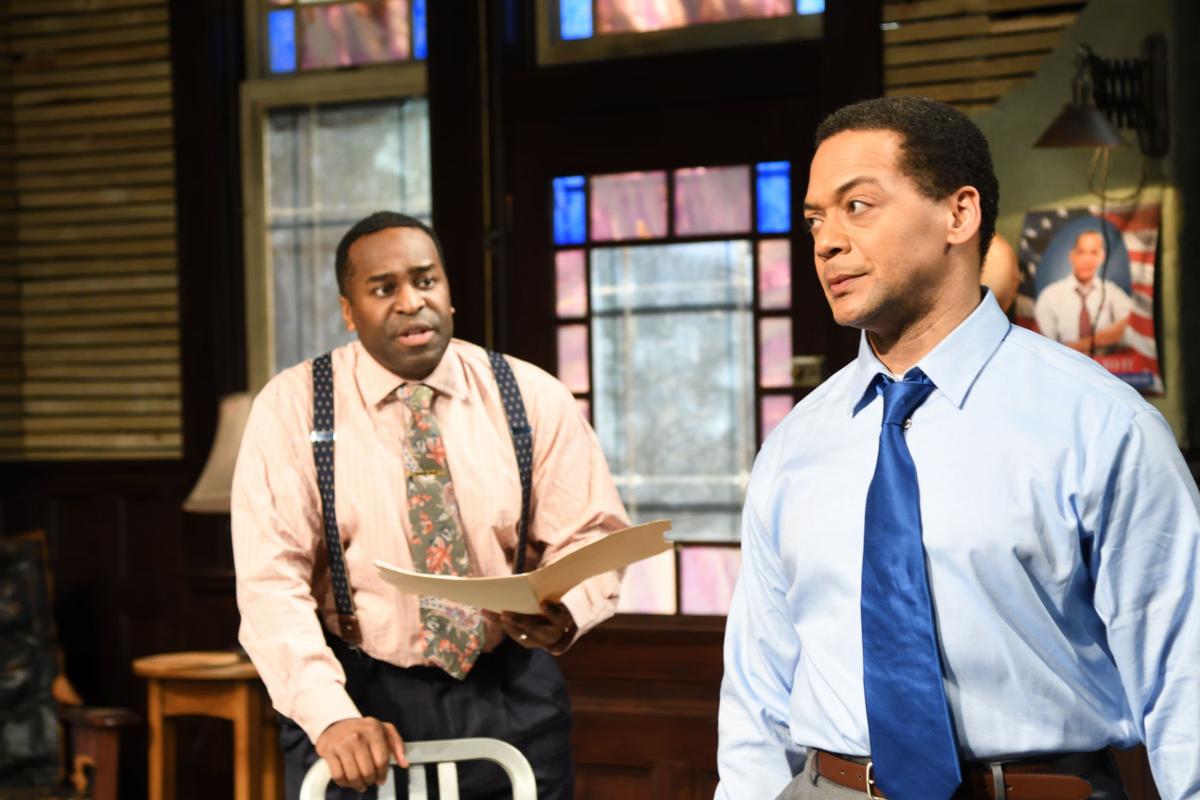 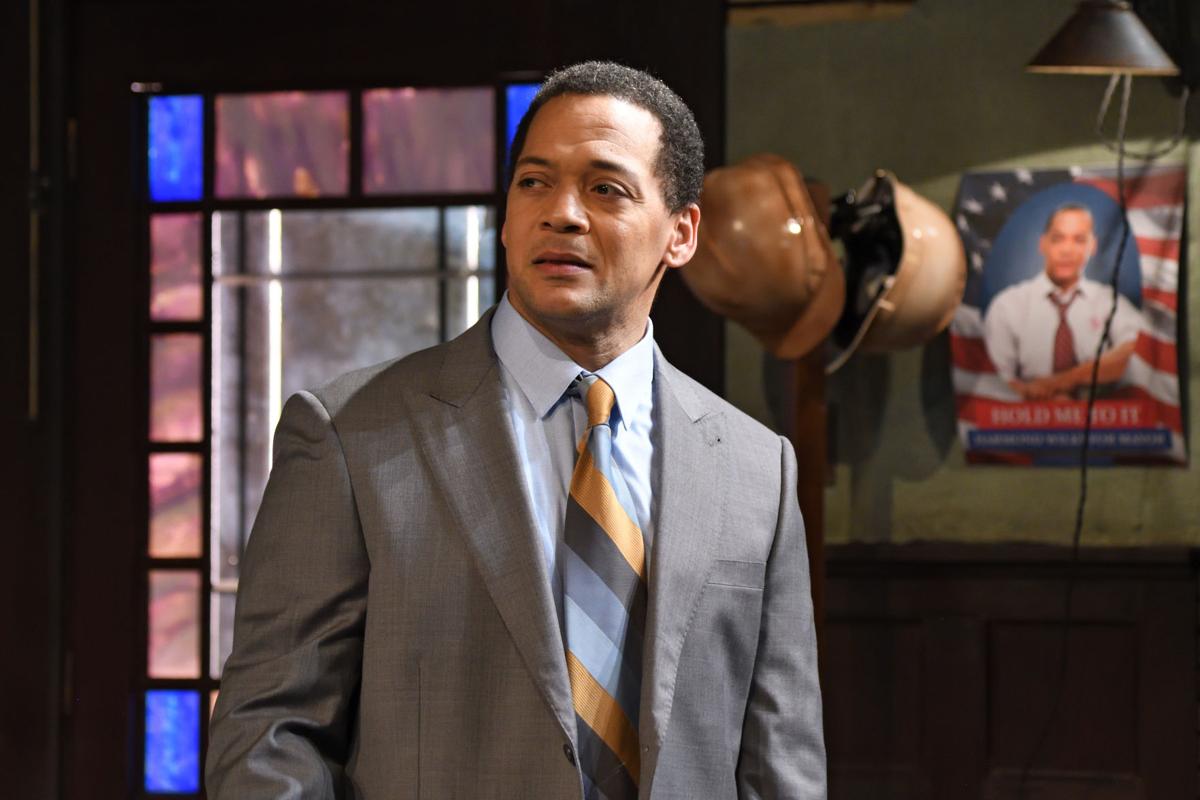 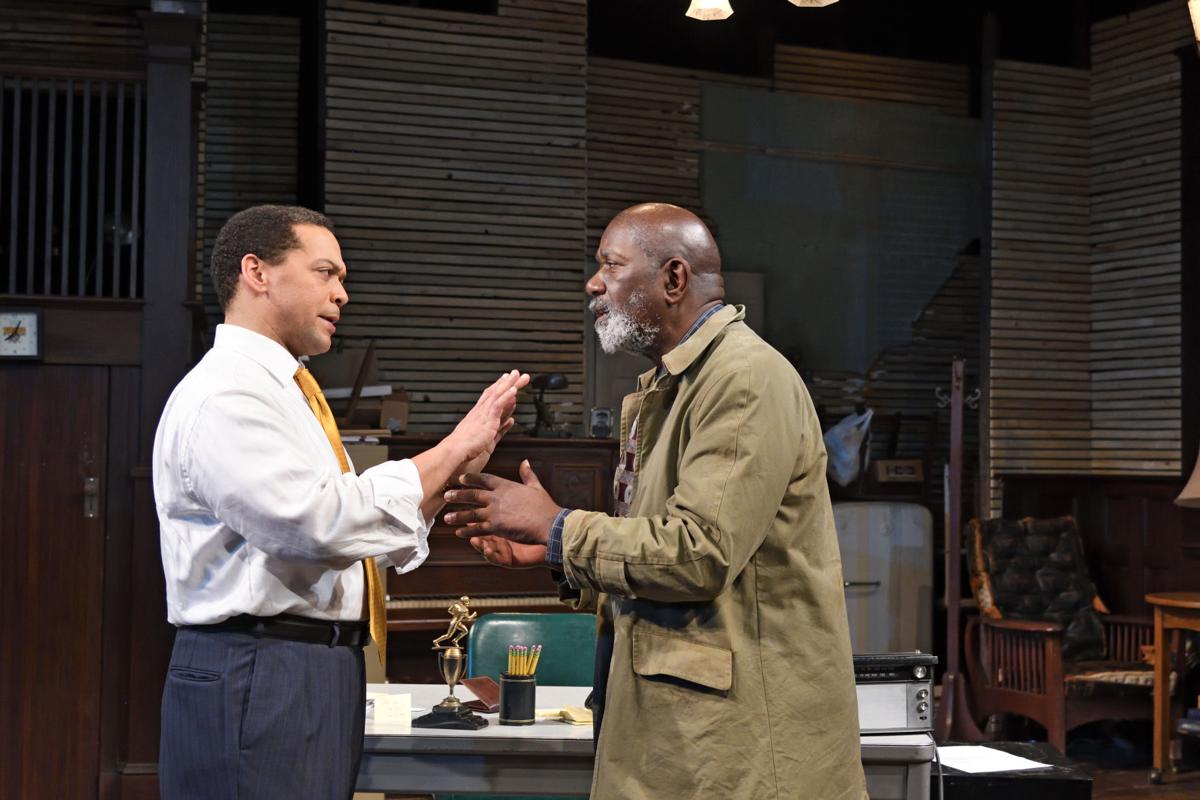 There were moments Monday evening — during the unusual opening night performance of August Wilson's big, rich and riveting play, "Radio Golf," on stage at Trinity Rep — that felt a lot like being in church.

Flawlessly directed by Jude Sandy and featuring a five-person powerhouse of a cast,  there was a definite reverence in the theater during the performance which was  underscored by the audience's call-and-response participation, and accented by the beauty and power of Wilson's words.

I suppose that sense of reverence was present before the play even began. The audience knew after all, that "Radio Golf" — a play as humorous as it is heartbreaking — would mark the return of the accomplished, much-revered Ricardo Pitts-Wiley to the stage in the role of Elder Joseph "Old Joe" Barlow. What they didn't know was the news Artistic Director Curt Columbus shared before the start of the play.

As he stood on the stage to greet the audience, Columbus made two announcements. First, he said, there was a change in the program. Derek Thomas, Columbus said, the actor who was supposed to play the role of handyman Sterling Johnson, the actor who had been rehearsing that part for months, was injured and unable to be on stage. Instead, he said, one of the show's assistant directors, JaMario Stills, would play the role, and because it was so last minute, Stills would be still on script.

Then, Columbus told the crowd, the performance of was being dedicated to the memory of Johnny Lee Davenport, the Boston-based actor who had performed in Trinity's 2008 production of "Richard III," and 2009 production of "A Raisin in the Sun."

After a communal gasp from the audience, the play — with its complicated themes of race, roots, real estate, money ... and golf — began. (A poster of Tiger Woods will be hung in the beginning and taken down at the end.)

"Radio Golf," the final work in Wilson's ten-play American Century Cycle, tells the story of Pittsburgh real estate developer Harmond Wilks (Joe Wilson, Jr.) who is on top of the world. Wilks, beautifully played by Wilson, is not only about to be elected as the first Black mayor in Pittsburgh, but he's working with his best friend and business partner, Roosevelt Hicks (Omar Robinson is spot-on) on a huge redevelopment program — complete with a Starbucks, Whole Foods and Barnes and Noble — in the heart of the city's Hill District. His equally successful wife and campaign manager, Mame (Tonia Jackson is a force) is about to be named to a top position in the governor's office. Harmond adores Mame and Wilson tells us why.

Here's how he describes meeting his wife:

"The first time I saw Mame it was raining. I thought she was gonna melt. The rain look like it hurt her. Like the two wasn’t supposed to go together. You couldn’t mix them up. That’s what made her stand out. She had a frown on her face and the rain was beating on her. She hurt from the injustice of it. That’s what made me like her. She could be strong and soft at the same time. I said I like that. I wished I had an umbrella but I didn’t. I went and stood and blocked the rain. I told her she looked too pretty to be getting all wet."

It seems like this ambitious trio have surely reached the big time. Although Roosevelt may be unhappy in his job as a vice-president of a local bank, he loves playing golf, teaching golf to underprivileged city kids at his golf camp, and sees "nothing but blue skies" ahead with the Hill District Project.

"Hail, hail, the gang's all here," they sing more than once, with handshakes, fist bumps and hilarious dance moves.

But, in the words of Old Joe, every perfect day has to come to an end. The triumvirate is challenged by Old Joe and Sterling Johnson who serve as reminders of the neighborhood's history and roots.

When Old Joe insists that the ramshackle house at 1839 Wiley — which sits smack dab in the middle of the redevelopment project — belongs to him, the troubles begin. Truth-telling Sterling, a self-employed contractor and handyman who finds pride in his work and independence and tells them he's his "very own union," becomes the moral one.

When Pitts-Wiley made his first appearance on the stage, as Old Joe simply looking for "some Christian people," the audience responded with warm, well-deserved applause ... just as they responded to Sterling's appearance and sterling monologues. (Did anyone even remember he was on script, I wondered? I didn't. Stills was superb.)

Pitts-Wiley, in a quietly brilliant, understated way, gives a performance to remember.

When Harmond learns that the sale of Old Joe’s house wasn't legal because it was purchased before it went to auction, things really fall apart. After he tells Roosevelt that Old Joe has to be compensated for the house, he learns that his father, mysteriously, had been paying the taxes on the house.

When Sterling demands to be paid for the gallon of paint he used to paint the door of 1839 Wylie Avenue — which has now been marked with a giant X — Harmond pays him, reminds him that the house will be torn down, then asks him why he'd bother to paint the condemned house.

Sterling tells Harmond that Old Joe hired him and he's prepared to defend the house against the demolition.

"You the cowboys. I’m the Indians," he says, dipping his fingers into the paint bucket and smearing stripes on his cheeks and forehead. "See who win this war."

Wilson may have written "Radio Golf" in 2005, and the play may take place in 1997, but its timeliness is uncanny.

"Radio Golf" is set on a perfectly simple, stunning stage with its period stained-glass windows, old Nat King Cole records, and plaster lathe, designed by Michael McGarty and Baron E. Pugh. Brush up on your August Wilson, and make sure to see this play. There is so much to savor, so much to see, so much to talk about.

WHEN: Through March 1, various times.

TICKETS: $25 - $90 depending on day and time. Visit trinityrep.com/box-office

Letter: Woman touched by the kindness extended to her

Woman charged with DUI after erratic driving in downtown Westerly