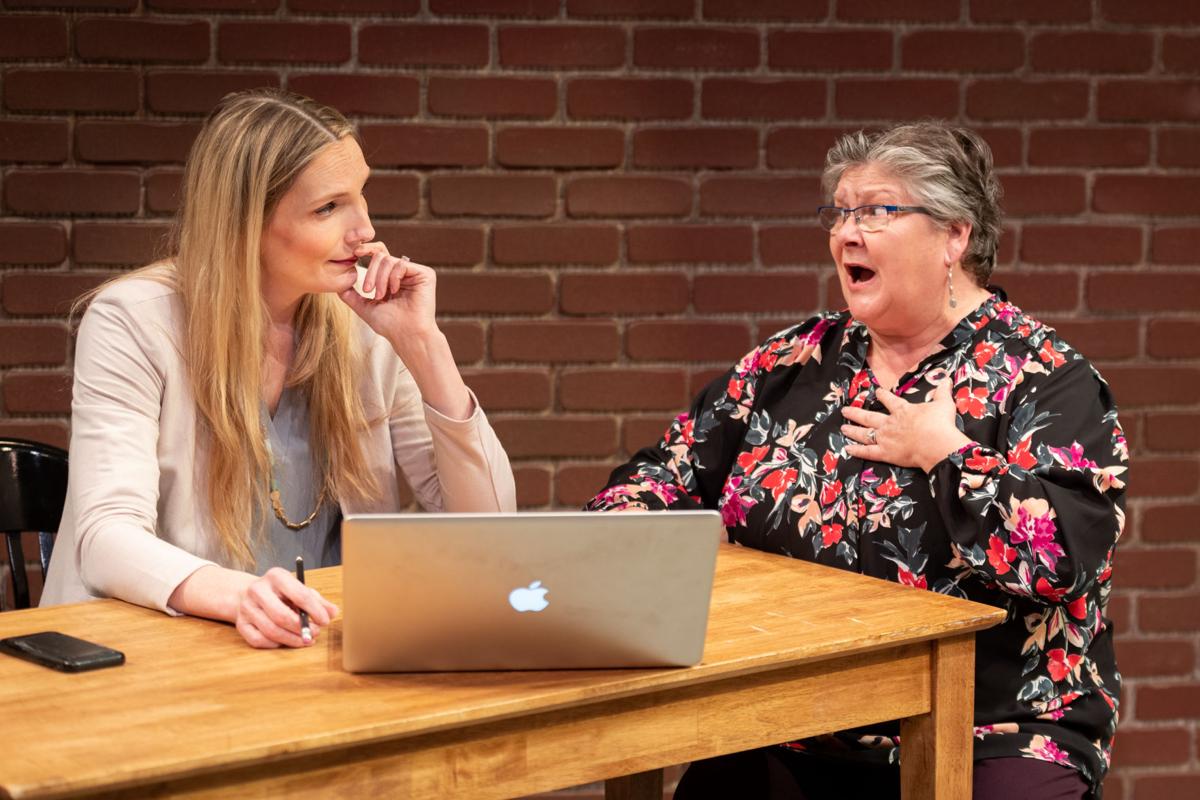 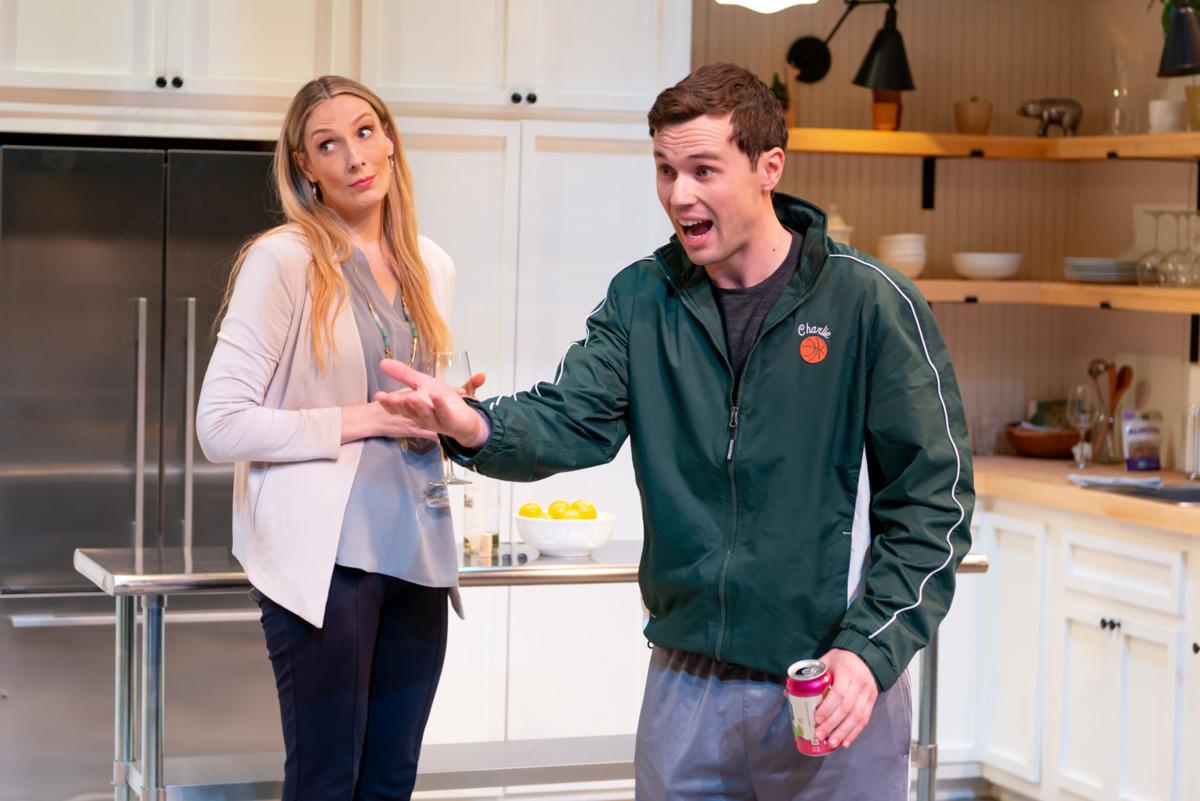 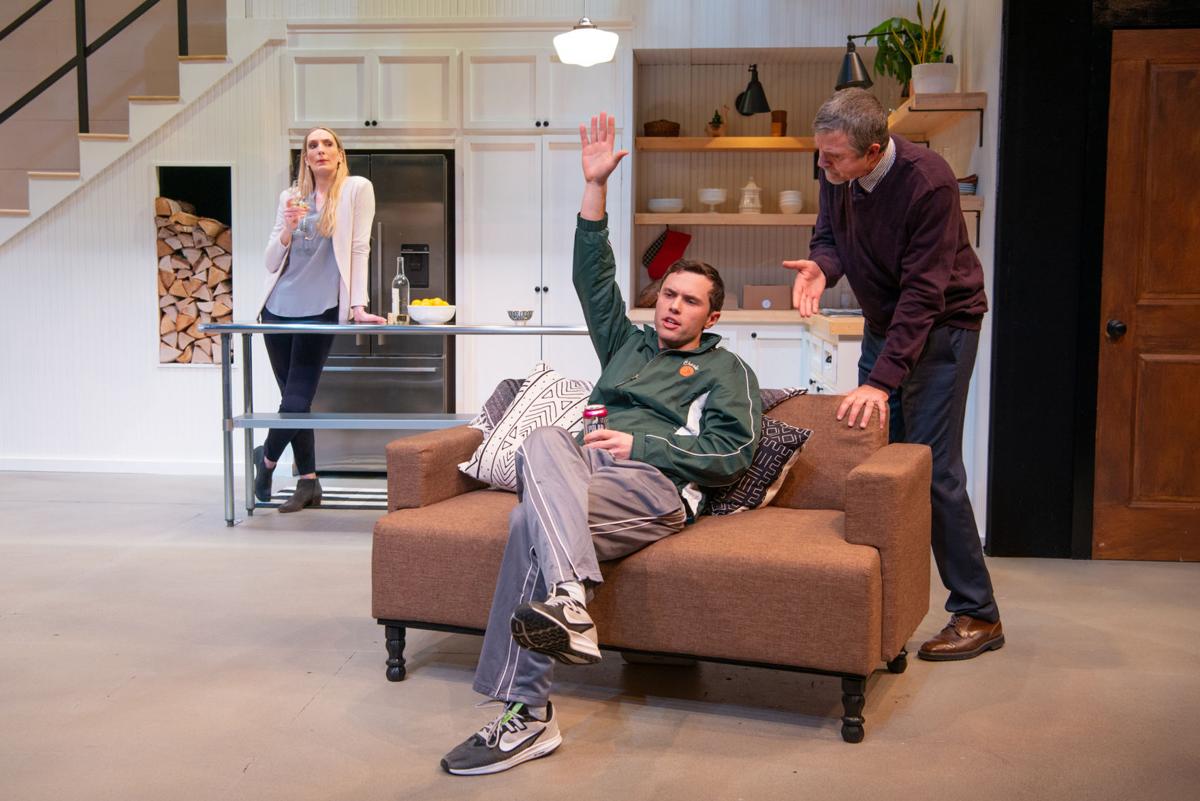 Deb Martin as Sherri Rosen-Mason, Jacob Osborne as her son, Charlie Mason, and Jim O'Brien as her husband, Bill Mason, in Joshua Harmon's "Admissions," now on stage at the Gamm Theatre.

Deb Martin as Sherri Rosen-Mason, Jacob Osborne as her son, Charlie Mason, and Jim O'Brien as her husband, Bill Mason, in Joshua Harmon's "Admissions," now on stage at the Gamm Theatre.

There was I, a white woman, watching a play — written by a white man — about white privilege, sitting with members of a mostly all-white audience and cast, on the day before Martin Luther King Jr. Day — all in the age of Trump.

Joshua Harmon's provocative play "Admissions," now on stage at the Gamm Theatre in Warwick through Feb. 9, may be a satire written to poke fun at white liberal elites, but it's also a very poignant play, a very funny play and a very timely play. Yes, it's a play about white liberalism and race, but it's also a play about families and friendship, our human frailties and our good intentions. It's a play with good, strong acting from each character, and a play with room to laugh. Notable too are Patrick Lynch's sets and Charles Cofone's sound.

Sharply directed by Bryn Boice in her Gamm directorial debut, "Admissions" tells the story of Sherri Rosen-Mason (Deb Martin), head of the Admissions Department at an exclusive New Hampshire prep school (Hillcrest), where her husband, Bill Mason (Jim O'Brien) is head of school, and her son, Charlie (Jacob Osbourne), is a senior anxiously waiting to hear if he'll get "early acceptance" to Yale.

Martin, who was unforgettable as the sultry Maxine Faulk in last season's "The Night of the Iguana," gives another performance to remember as the angular, intense, high-strung, uber-focused Sherri determined to diversify Hillcrest and make sure her son attends an Ivy League college. Martin is a riveting force.

We first meet Sherri as she's pouring over her MacBook Pro in her tidy office, outraged that the new Hillcrest admissions catalog contains only three photographs featuring "people of color."

Enter Roberta (Wendy Overly), a member of the school's development office and the object of Sherri's wrath for not making the brochure look more diverse. Overly is hilarious as the kind, oblivious and color-blind Roberta.

The catalog, Sherri proclaims to an astonished Roberta, is a failure. When Sherri accuses Roberta of trying to thwart her efforts to bring diversity to Hillcrest, Roberta replies; "I just don't have this same fixation on race that you do. All you talk about is diversity, diversity, diversity."

It's true. Sherri is constantly dealing with diversity and race. When her white best friend Ginnie Peters walks into the Masons' clean, white kitchen to share a glass of white wine and angst over their sons' college plans (the boys are best friends who have both applied to Yale, thanks to "Mystic Pizza"), we learn that Ginnie's son, Perry, is bi-racial (we never get to see him, or his African-American father, onstage).

When Bill comes home from work with two bottles of wine — a red and a white — it's to celebrate the fact that his wife has reached the diversity quota, raising the number of students of color from 6 to 18 percent.

When high-achieving Charlie (whose middle name is Luther, in honor of Martin Luther King Jr.) learns that he's been wait-listed at Yale while Perry, who scored lower than Charlie on his SATs and took fewer AP courses, was accepted, a volcano erupts. Charlie is furious at the injustice of it all and explodes, delivering a lengthy, entitled tirade that stuns his parents.

Osborne, a Gamm newcomer, is electrifying. A real-life Yale graduate, Osborne is extraordinary as the raging, entitled teenager.

When Charlie later has a change of heart and makes a bold decision, one that would seem to make his parents proud. They refuse to accept their only son's plan, however, and the audience is left with a lot to think about.

I didn't leave the theater feeling guilty or privileged or defeated or sad, I ended up thinking about how damned difficult — and sensitive — matters of race are, were and will probably always be. And yes, I felt uncomfortable but I also ended up feeling hopeful and grateful that we can and should talk about race and grateful that we can and should laugh at ourselves as we meander through the maze of political correctness.

"It is easy, in times like these, to point at someone else as the problem," the playwright said in a 2018 interview. "We see it on the right, and we see it on the left. What we see too rarely is self-reflection. This play, I hope, creates a space for some self-reflection, to look within, to consider the ways in which, even with the best of intentions, we can remain complicit in the perpetuation of something that we simultaneously abhor."

With "Admissions," Harmon has succeeded for sure.

WHAT: "Admissions," by Joshua Harmon.

Council members go back to school to study condition of facilities

1 arrested in connection with Hitler stickers in Bristol