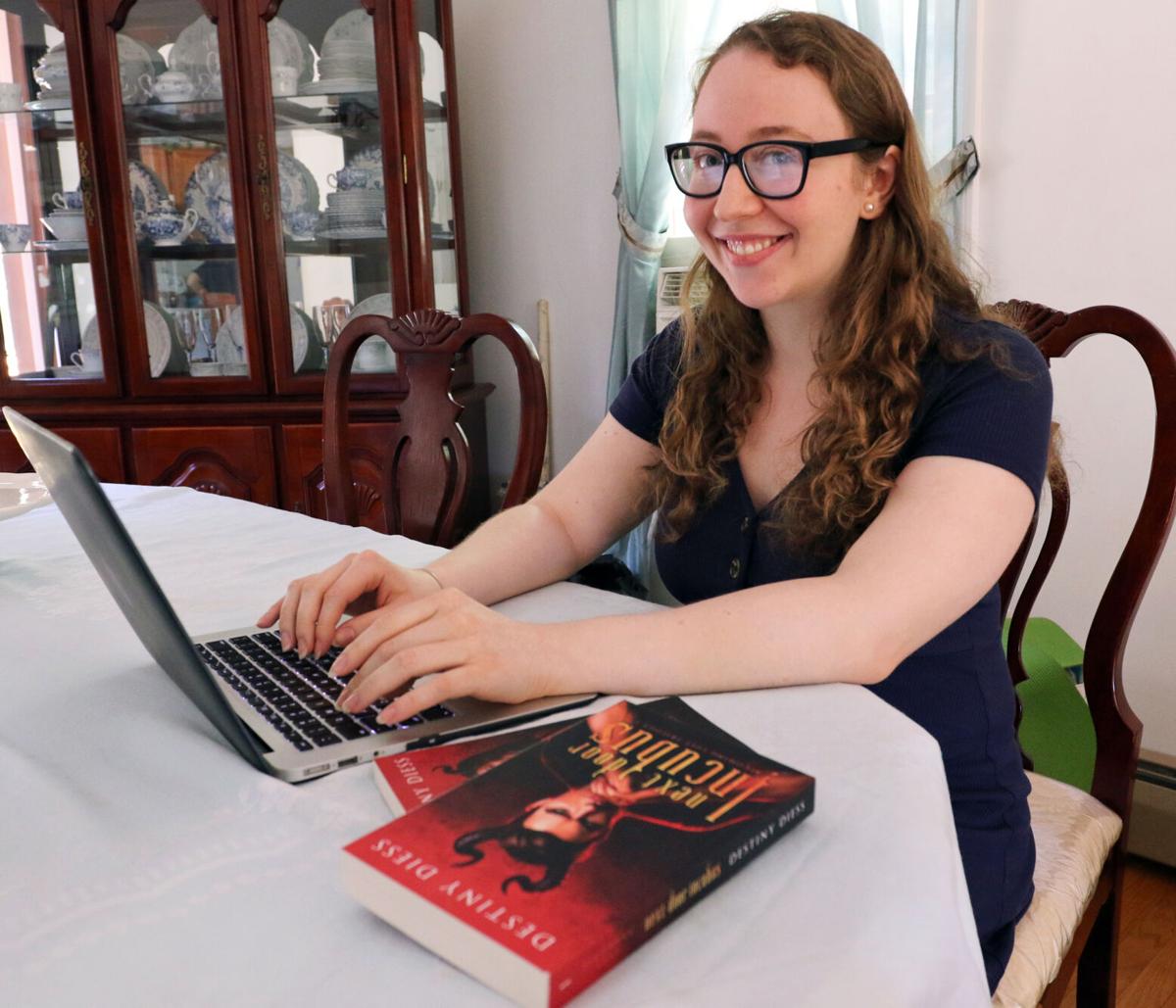 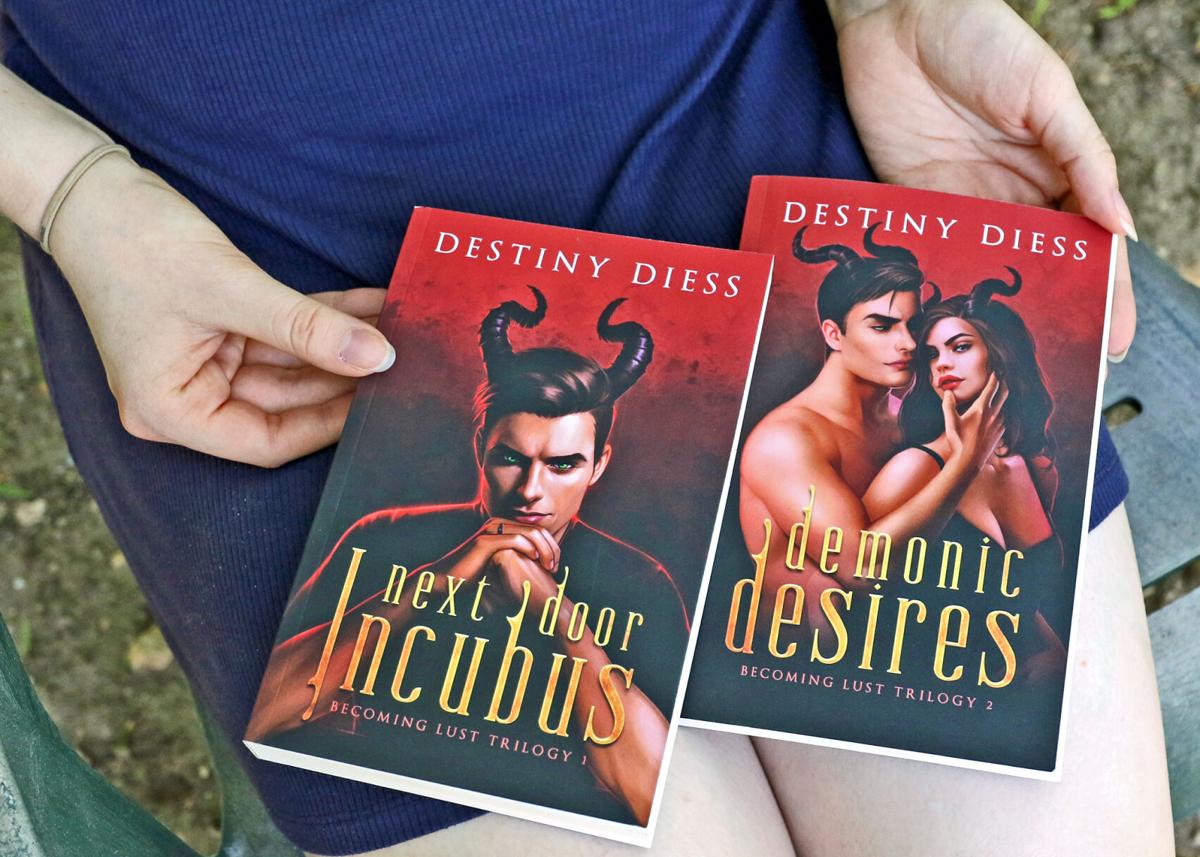 WESTERLY — Writing about sexy demons has proved to be one of the best decisions she's ever made professionally, author Destiny Diess announced recently on her Facebook page.

"Not only is it fun to dive into a world filled with paranormal lust, sinful kingdoms and Fervor Crisps," added the Pittsburgh resident, "it also allows me to not play by the rules!"

Born and raised in Westerly, Diess attended Westerly public schools, graduated from the high school in 2016 and is now a full-time writer, penning "steamy paranormal romances" for her legion of eager fans.

"It's kind of an escape for me," Diess said during a recent telephone interview, "especially lately with all the COVID stress."

In "Next-Door Incubus," readers are introduced to Eros, Diess said, an incubus with "large, curved horns and an insatiable hunger" for his neighbor, Dani.

Although Dani does her best to avoid the incubus — a mythological demon who appears in male form — she can't seem to stay away from him.

"He’s haunting her nights with his devilish black eyes and he’s hiding a dangerous secret that may cost Dani her life," Diess writes.

"I started writing when I was about 13," said the soft-spoken Diess, who remembers being impressed and inspired by bestselling Romance author Janet Evanovich when she was a youngster.

"I read a lot in high school," Diess continued, "like 'The The Werewolf and The Raven' books."

Diess has high praise for several of her teachers from her school days in Westerly.

"Mrs. Dunn, Mr. Fusaro," she recalled. "And I loved Mrs. Oliveira, my English teacher ... and Miss Barnhart was amazing."

Anne Barnhart, an English language arts teacher at Westerly High School and the co-director of the Rhode Island Writing Project, said Diess was a core member of Ink Bandits, Westerly High School's Creative Writing Club, and "a quiet force ... a perfect blend of hard and soft."

The oldest daughter of Kim and Larry Diess of Bradford, Destiny was home for a visit with her family — which also includes her two sisters, 18-year-old Lexus and 13-year-old Adriana — earlier this summer, and took some time to chat about her road to paranormal romance-writing.

As a self-published author, she explained, "basically, I write the book and then I send chapters to my fans and they help me revise and then I push through Amazon and Nook."

"I also get people to buy Patreon," she said, referring to the membership platform that allows authors and other artists to earn income by offering exclusive benefits to subscribers.

Diess, who studied studied psychology and creative writing at the University of Pittsburgh, said she stopped writing during college because she was too busy with her studies. After graduating, and after deciding to stay in Pittsburgh ("I fell in love with the city," she says), she picked it back up and put her undergraduate studies to good use.

One of the characters she's creating now, for instance, has a psychological disorder.

"I'm writing a story about a guy with a split personality," she said. "He has a personality disorder called dissociative identity disorder."

And then there are werewolves and demons ... and Greek gods, she said, noting that her books are full of Christian symbolism and Greek mythology.

Diess said she was also inspired by Gillian Flynn, the author of "Gone Girl," the tremendously popular thriller that was made into a movie starring Ben Affleck as the husband accused in the disappearance of his wife.

"She opened my eyes to different types of writing," Diess said.

She's also a "huge" fan of the "Twilight" series and of the work of fellow paranormal romance writer Michelle Mills.

Diess said she enjoys writing fantasy fiction and about werewolves and demons "because I can make them do anything I want."

"They don't have to have human qualities or follow human rules," she said.

Dani, her main character in "Next-Door Incubus," starts off as a human but becomes "mixed" — half angel and half demon.

Diess said she has long been an advocate of trying different things. In high school, she wrestled and was the scorekeeper for the wrestling team. She also took up judo and jujutsu.

"Martial arts helped me keep in shape and made me stronger physically and emotionally," she said.

Diess' high school teacher Barnhart recalled her former student as "strong, determined, disciplined and deeply committed to improving ... as both an athletic fighter and creative writer."

"She asked questions, experimented, and stayed true to her values and interests," Barnhart said in an email. "She ALWAYS loved a good romance, and it truly brings me joy to see her continuing to share her love for storytelling, the nuances of the human spirit and her craft with others!"

When she’s not writing, Diess writes on her official biography, "she’s watching 'The Last Kingdom' on Netflix, taking walks around Pittsburgh, or relaxing with a good book."

At the Library: The library can take you under the sea