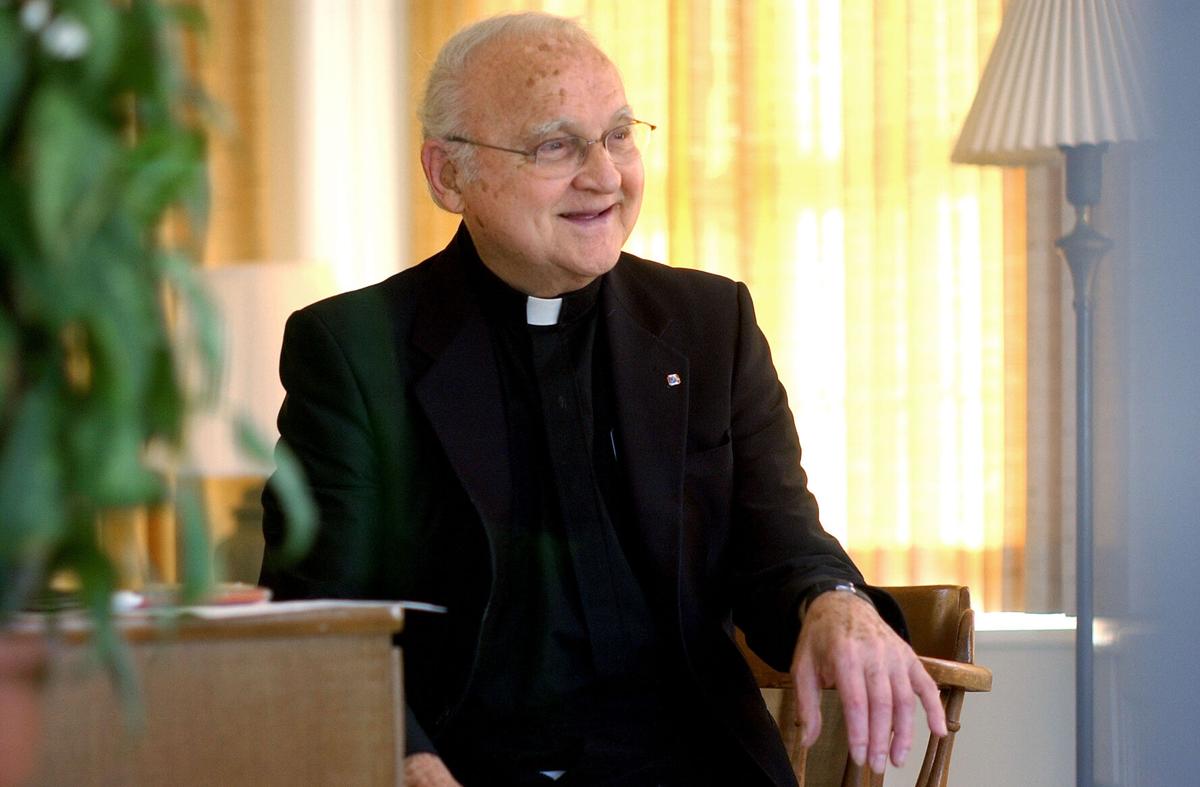 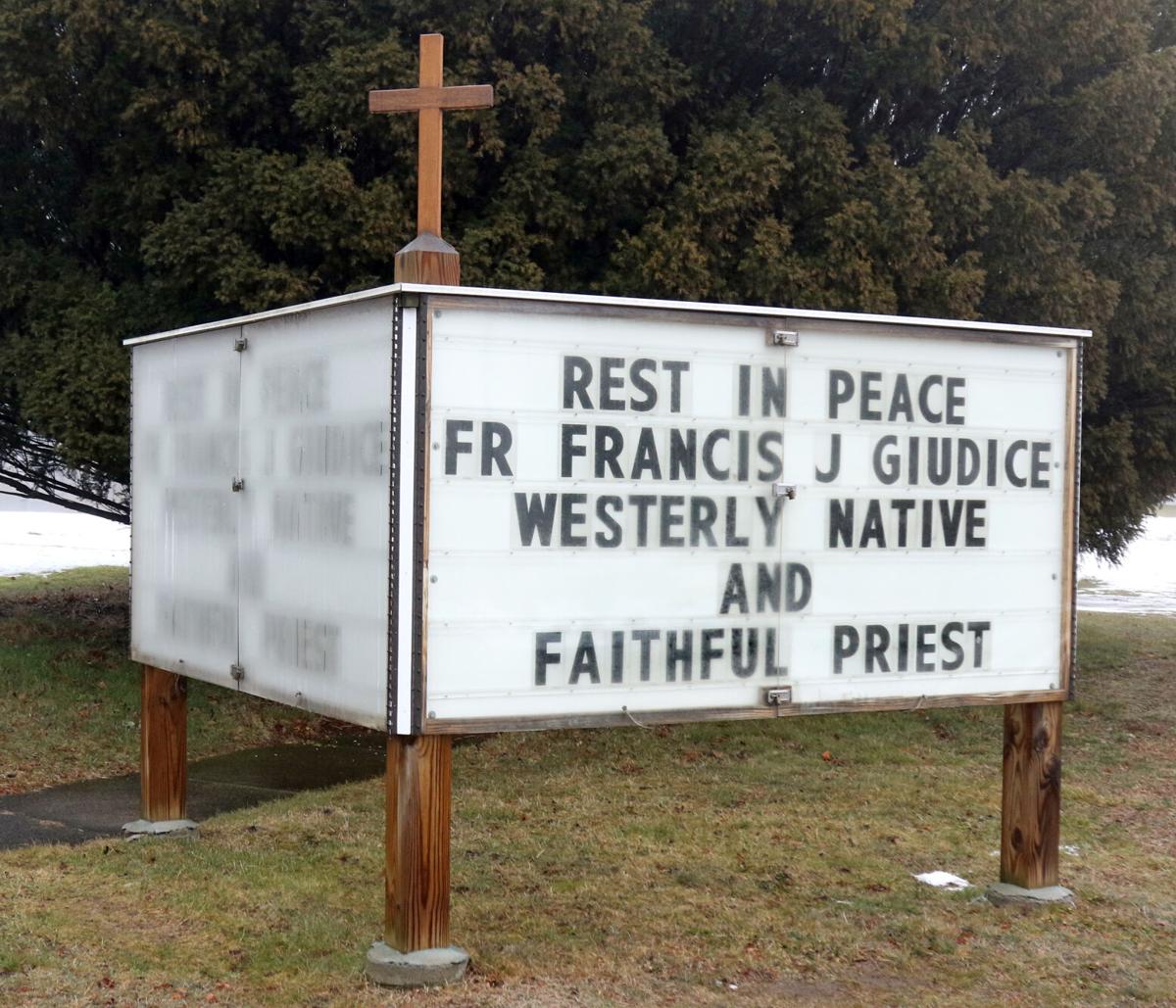 WESTERLY — The Rev. Francis J. Giudice, the Westerly native and Pastor Emeritus of Saints Peter and Paul Cathedral in Providence who died earlier this month at the age of 92, was a much-loved, highly respected priest and public servant who is being remembered for his many gifts and the significant contributions he made during his long life.

Father Giudice not only improved the lives of untold numbers of people through his work with the neediest Rhode Islanders — along with many in Haiti, where he established an orphanage-turned-school — his friends and family said, but he radiated joy and love and brightened the lives of everyone he knew.

A veteran of the Korean conflict, Father Giudice — who was the president of his 1946 graduating class from Westerly High School — founded an orphanage in Haiti in the 1980s, which today has been converted into a full-fledged school; he wrote two books about Westerly's famed Oak Street section of town and its people; he helped establish the Bishop McVinney School in the heart of inner-city South Providence; he served as the first-ever Vicar for Community Affairs for the Diocese of Providence; and he was a pastor, teacher, hospital administrator, uncle, brother and friend.

"He was a happy priest," said Rev. Raymond N. Suriani, pastor emeritus of Westerly's St. Pius X Church. "A visibly happy priest who clearly loved what he was doing."

"Anyone who knew Father Giudice knew how much he cared for the poor and for those in need," Suriani told the faithful gathered at Father Giudice's funeral Mass last week, a gathering that included Bishop Thomas J. Tobin and Auxiliary Bishop Robert C. Evans, along with 20 other priests. "His faith was clearly evident in the many loving, charitable works he did on their behalf."

Suriani first met Giudice when he was a boy and Giudice was the assistant pastor of Holy Angels’ Church in Barrington. Suriani, who was an altar server at the church, looked up to Giudice, and said he was inspired to become a priest because of Giudice and the way he carried himself.

Giudice's joy was visible even to a small child, Suriani said. "He preached the 'Good News'  ... for more than 60 years of his life to all who would listen. He found deep personal fulfillment in bringing Jesus Christ to people in word and sacrament."

"He had kind of an inner peace," said Giudice's nephew, Stephen Iacoi, a retired Westerly police detective. "He was happy. He lived the life he wanted to live and that made him happy."

He was a bright light, added his niece, Barbara Iacoi of Westerly. He was a man who always spoke of the value of a good education and always took care of "the poorest of the poor and the neediest of the needy."

"That was his life's work," she said.

Iacoi said her uncle was encouraged to attend college by his high school teacher, Lillian Ruisi, but enlisted in the army instead. While serving in Korea, she said, he befriended a Protestant minister who inspired him to become a Roman Catholic priest.

"He was such a joyous person," said Susan Whipple, the director of Providence-Haiti Outreach, the organization Giudice founded with Whipple's father, the late Pat Pezzelli, a co-founding member of the board. "His whole being just radiated."

Whipple said Providence-Haiti Outreach began when Giudice, under the leadership of former Bishop Louis E. Gelineau, placed an ad in the Providence Visitor seeking volunteers to go on a mission trip-retreat to Haiti. Her father answered that ad, she said, and went along with Giudice. The two soon became best friends, began fundraising and bought a piece of land in Haiti to build an orphanage for 50 children.

"Today it’s a school for 700 with a computer lab and a playing field," Whipple said. "In fact, we're about to graduate our first high school class."

"It's an amazing tribute to my father and to Father Giudice," she added.

"He was a great man," said Father Joe Protano, the pastor of St. Andrew's Church on Block Island, where Giudice often served, especially when Protano was on vacation. "He was a beautiful man who did beautiful things. He was a pioneer."

And he was generous, added Protano.

"He would never take a stipend," said Protano. "And he said a lot of Masses ... and it was a nice stipend."

"Instead, he'd say to make the check out to Providence-Haiti Outreach."

"When we gave him checks for the Masses and services he provided for us at St. Pius ... those checks were never made out to him personally ... they were always made out to Providence-Haiti Outreach."

"Father Giudice was like a magnet," said Fiore, noting that Giudice served as president of the St. Pius School when he was school principal. "You just couldn't say 'no' to such a beautiful Italian man."

He was also wise, said Fiore, recalling a time he expressed concern to Giudice about "the events going on in the world."

"'Just read the Old Testament'," Giudice reassured him. "This stuff has been going on since then. Everything will be okay. It always is."

Bringing down the house

"I cherished the times I was blessed to talk with him at the school," added Fiore, who said one of the biggest honors of his life was when he served as the emcee for a fundraising roast in honor of Giudice back in 2013.

"We broke the record for fundraising in one night," Fiore recalled. "We raised thousands of dollars for the school."

Part of the reason they raised so much money, Fiore explained with a laugh, was because the guests were regaled with hilarious stories of the unlikely partnership between Giudice and Suriani — two very different priests.

"Father Ray brought down the house with true stories from the rectory," joked Fiore. "It was Westerly’s own [version] of the sitcom, 'The Odd Couple,' with neat-freak Father Ray and not-so-neat Father Giudice."

Suriani also inspired laughter when he spoke of Guidice's driving habits ("I used to call his car the Demolition Derby-mobile," he joked) and the ongoing issue of the alarm system at St. Pius X Rectory and Giudice's constant forgetting to turn it off.

"People with police scanners probably thought we were getting robbed every other day," Suriani said.

Despite their differences, Fiore added, "The bond between Father Ray and Father Giudice was unique and one of mutual love and respect."

Eileen Fiore, who is married to Henry, is a Stonington Public Schools teacher. When she started a school club called "Helping Haiti," she invited Giudice to come and speak.

"He really impressed the students when he talked about his organization raising enough funds to build a school after the Haiti earthquake in 2010," she said. He impressed one student so much that she told the priest she had become "very inspired," thanks to him and his talk.

Fiore said she will always remember his response.

"When you feel inspired, you are excited," Giudice told her students. "That's when you go and light the same fire in the hearts and minds of others."

Donations in the memory of Father Francis Giudice can be made to Providence-Haiti Outreach, 125 Scituate Ave., Cranston, RI 02921.