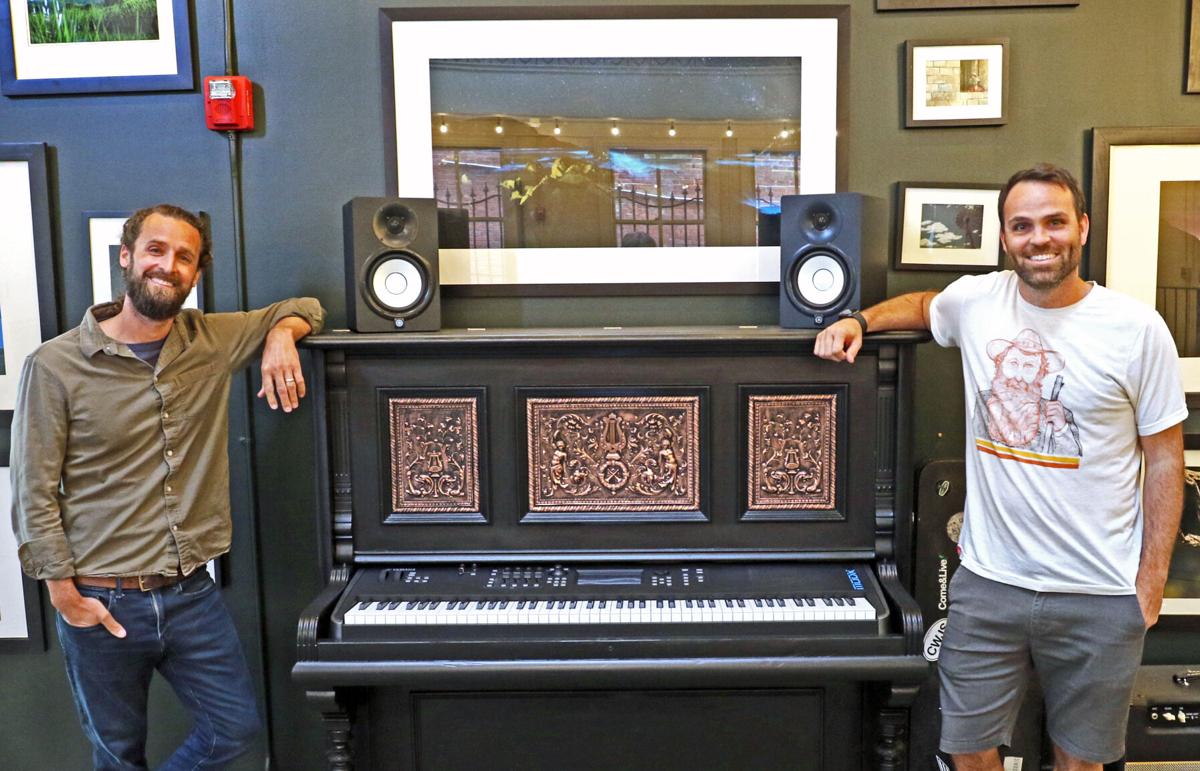 Gnarly Bay founders Dana Saint, left, and Dan Riordan pose beside an old upright piano that has been retrofitted with a soundboard. The headquarters for Gnarly Bay, a local video production service, has recently relocated to the former Industrial Trust Company building on High Street in Westerly. | Harold Hanka, The Westerly Sun 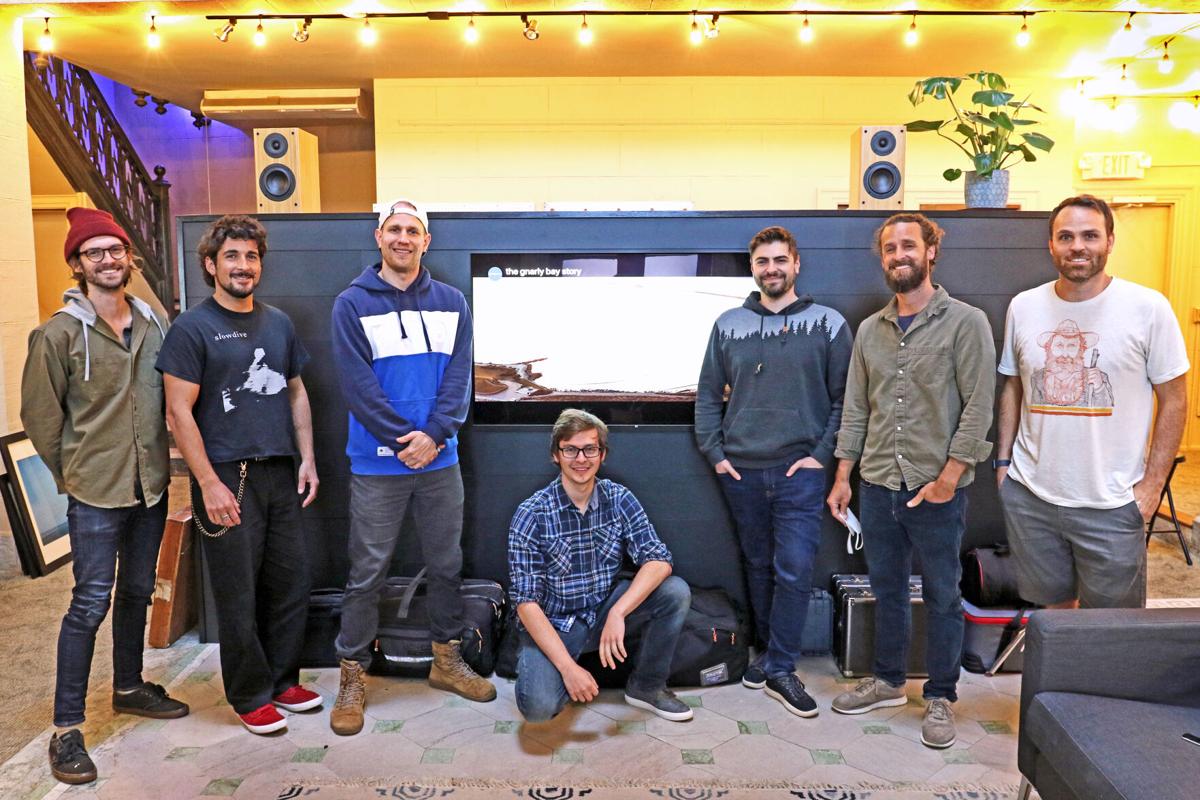 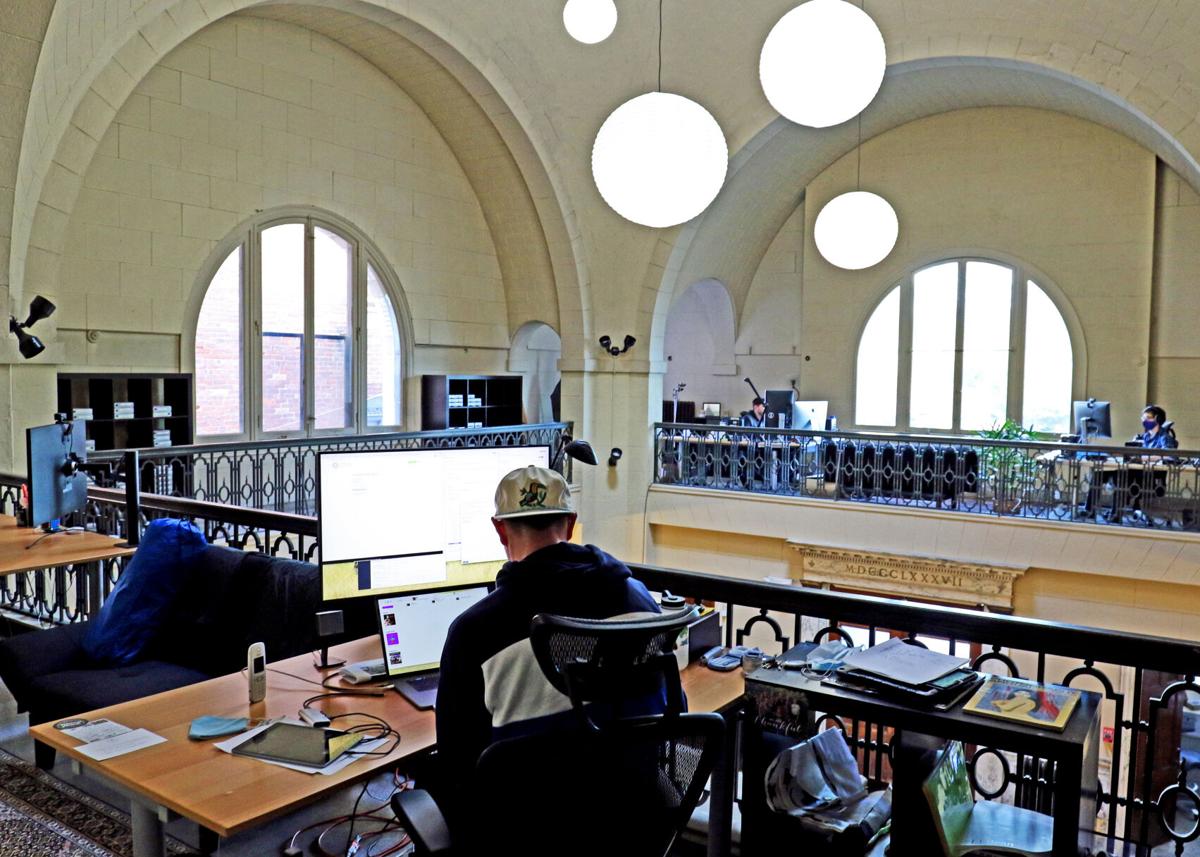 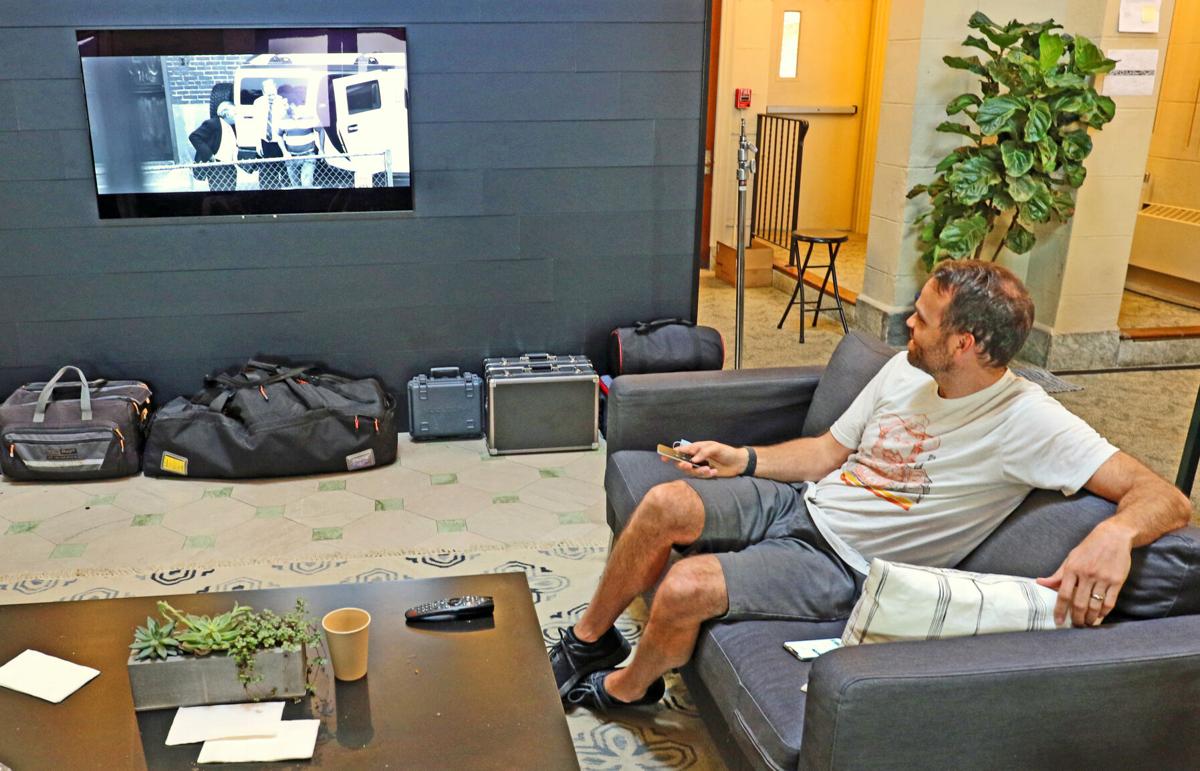 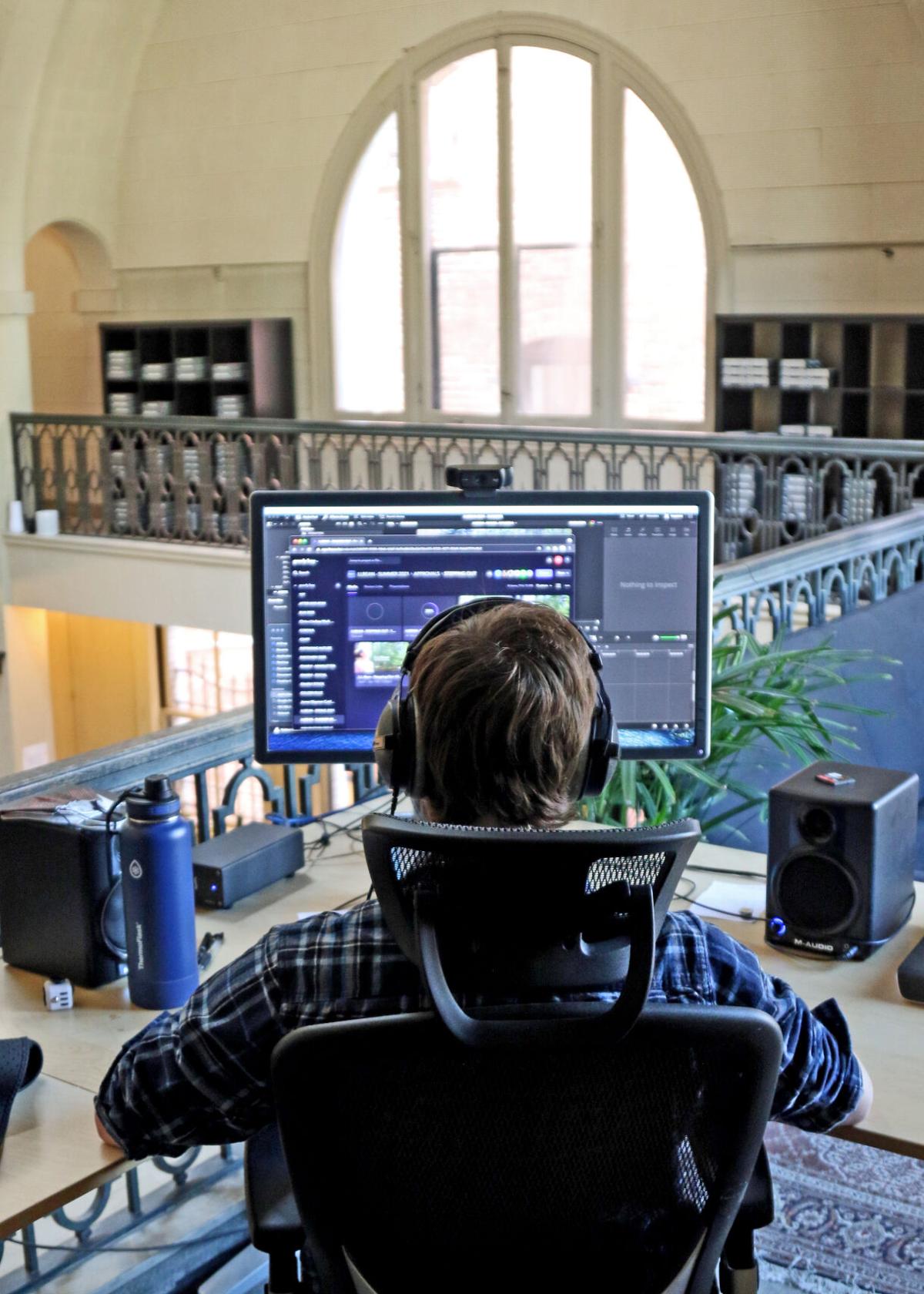 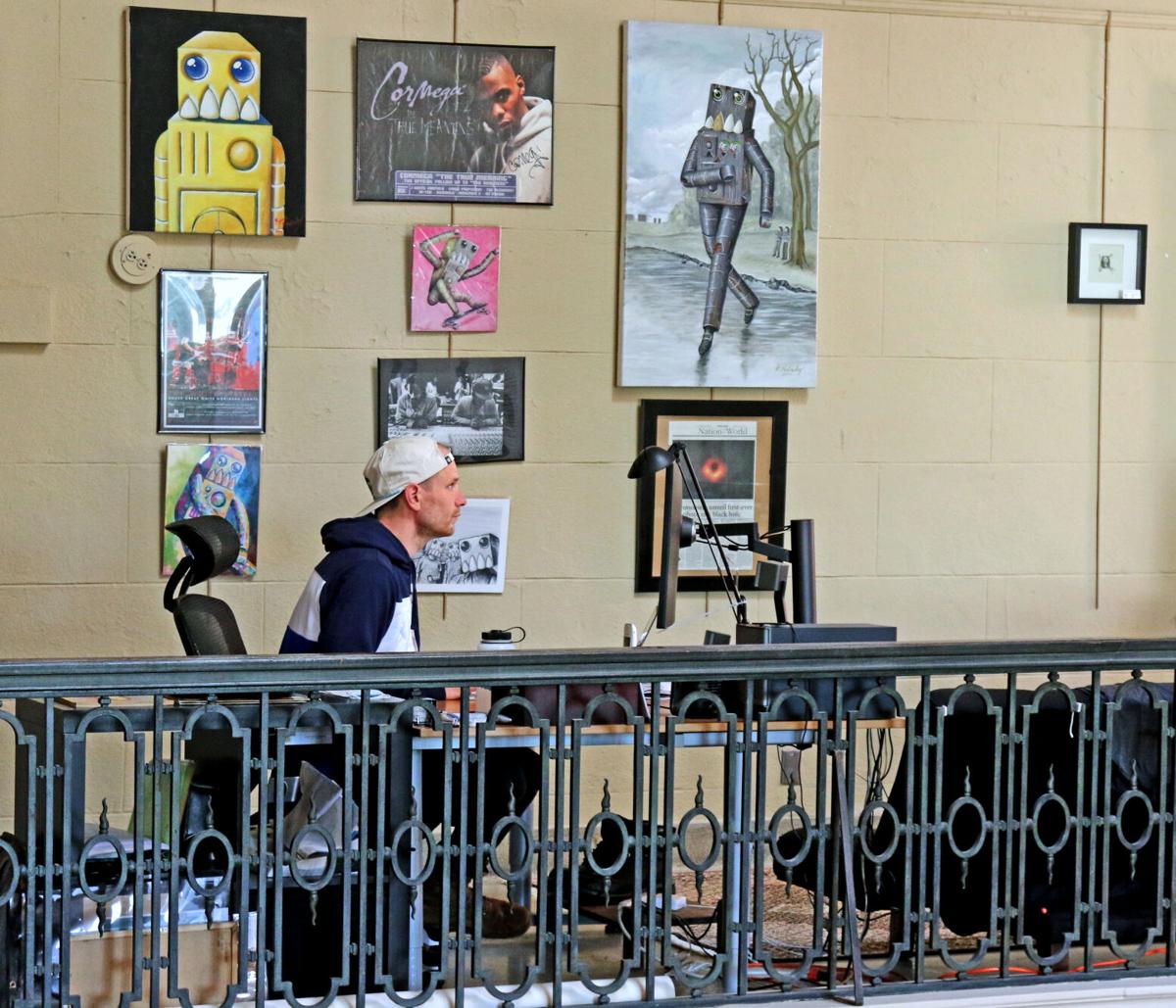 Gnarly Bay founders Dana Saint, left, and Dan Riordan pose beside an old upright piano that has been retrofitted with a soundboard. The headquarters for Gnarly Bay, a local video production service, has recently relocated to the former Industrial Trust Company building on High Street in Westerly. | Harold Hanka, The Westerly Sun

WESTERLY — If you've ever watched one of those Lifespan commercials — the ones featuring regular folks doing regular things accompanied by music that tugs at your heartstrings — and felt a little catch in your throat or tear in your eye, then Dan Riordan and Dana Saint have accomplished their mission.

Riordan and Saint, who first met when they were kids attending Chariho Middle School, are partners in the Westerly-based video production company called Gnarly Bay. Their mission, they say in one of the videos they created about the company, is to "make work that inspires and connects ... work that emotes ... maybe through laughter or nostalgia, kindness or love."

The pair have been making videos for more than 20 years now and have created not only the compelling Lifespan commercials but wedding videos, passion projects, promotional videos and spots for a number of national clients, including L.L. Bean. One of their videos— a "Rambo"-inspired film about a bachelor party — drew roughly 10 million viewers.

"We've been lucky to do what we love," Riordan said one afternoon last week as he and a few members of the Gnarly Bay team sat in their new home inside the historic Industrial Trust Building on High Street.

The childhood friends, who started the company in 1999, moved the business recently from the basement of the Brown Building next door to the wide-open, expansive Industrial Trust Building that once served as headquarters for the Westerly Land Trust.

"We're moving up," Saint said with a laugh. Or, as they say in another company video, they moved "about a hundred feet away  ... to an ancient cathedral of a bank right next door with towering ceilings, inspiring old-school architecture and all the steel vaults a small video production company could ever need to store their 500 terabytes of hopes and dreams."

There had been talk of renting space in the United Theatre, Riordan said. They've worked with the team at the United on a number of projects already — such as the annual Time and Tides Film Festival — and will continue to do so. But, with a growing staff — there are 11 staffers, nine in Westerly and two on the West Coast — and a need for more space for editing, meetings and planning, the Industrial Trust Building seemed a better fit. The building is officially still owned by the land trust under a loan agreement from the Royce Family Fund. The fund's executive director, Daniel King of Westerly, said he's looking forward to more collaborations and partnerships with Gnarly Bay.

"We have the ultimate respect for their boundless talent and creativity," King said, "and marvel at their unbridled passion for life."

That unbridled passion actually began with horror movies, Riordan and Saint recalled as they laughed and told stories of the early days of their partnership.

"We had a JVC video camera with a huge battery pack that they commandeered," she said in an email. "They fell in love with creating videos.

"They were both so talented and artistic," she added. "It quickly became their passion, and Gnarly Bay blossomed into the profession they love.

"How lucky they are to spend every day doing what they enjoy in the place they grew up," she continued. "I always knew they'd find success ... they are a great team and they have surrounded themselves with talented young people."

Ken Richmond of Wakefield, a retired businessman, hired Riordan and Saint back in the early days of Gnarly Bay to make a commercial for his now-shuttered shoe store, Feet First, which was a mainstay at the Dale Carlie Shopping Center for decades.

"They were a couple of goofy teenagers doing the goofy things teenagers do," Richmond remembered with a chuckle. But the commercial they made  — which featured a friend flying down the streets of Wakefield and into the shoe store while sitting in a reclining chair, will go down in the annals of Rhode Island video history, no doubt.

"They had mounted a camera on the hood of a car to do the videotaping, recalled Richmond, who appeared in the commercial. "They were so focused they drove right through a red light."

Riordan continued to make short films and documentaries while he was a student at the University of Rhode Island, including one about the Sept. 11 attacks at the World Trade Center. Riordan, a 2003 graduate, garnered praise and awards for his work during his time at URI. Now 37, Riordan and his wife, Kateri, have four children: Wes, 6; Iris, 4; Willa, 2; and June Magnolia, who arrived a little more than a week ago.

Gnarly Bay has changed quite a bit over the years, a narrator says in a video about the move to the bank building. "New faces, new clients, operating systems, software, hardware and workflows," the narrator says, "through weddings, growing families, purchased homes, rising decibels of construction noise ... and even a pandemic. We are finally moving out of the basement."

"It's cool that we're still in Westerly and it's cool that we've been able to make a career of this," added Saint, who lives in Charlestown with his wife, Nina, and children Oliver, 4, and Marlo, 2.

Or as the narrator says in the Gnarly Bay video, "It's a new beginning ... we’re so excited for what’s in store for this incredible space in this beautiful small town we call home."

The home, by the way, that includes the inspiration for the company's name: Gnarly Bay, a fictitious body of water near Napatree Point.

"The story is that the waves in that little inlet are tiny but perfect," the narrator says on the Gnarly Bay video. "Maybe someday they will be big enough to break — and surf."

Council members go back to school to study condition of facilities

1 arrested in connection with Hitler stickers in Bristol