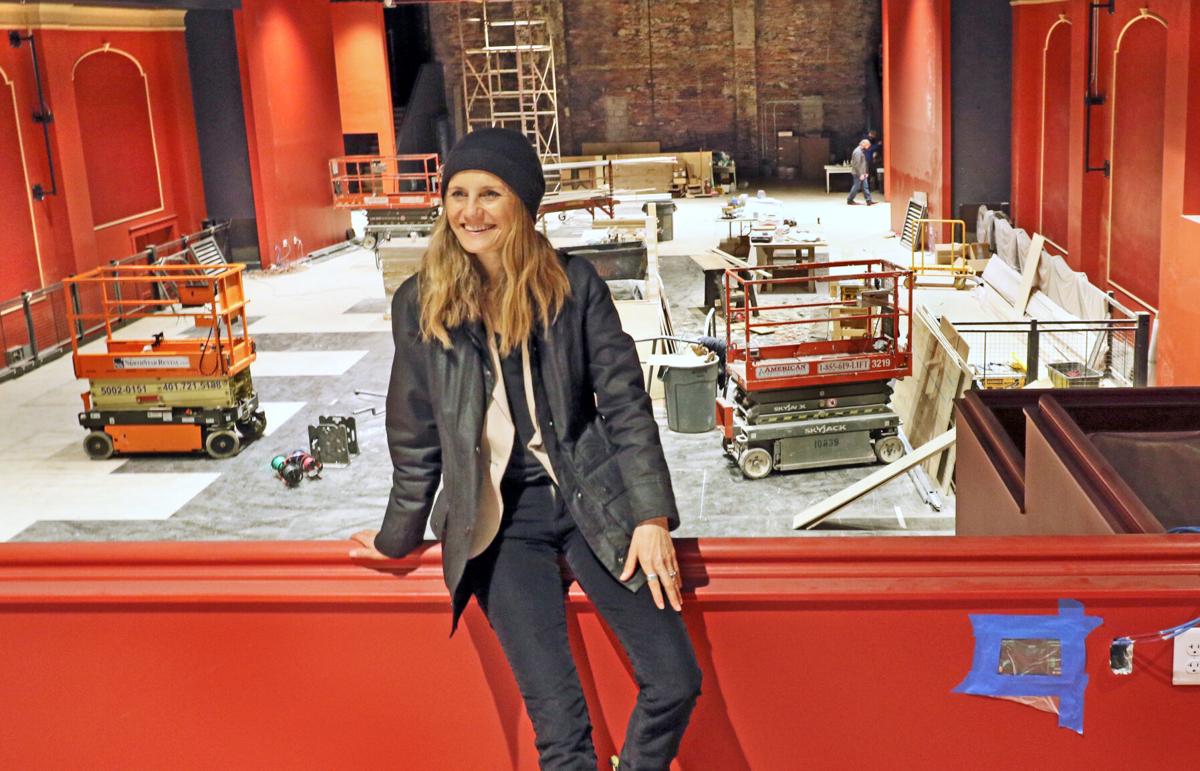 Lisa Utman Randall, executive director of the United Theatre, is pictured above the complex’s theater area. Randall led a group tour to show the progress being made on the renovation of the theater last Tuesday. | Harold Hanka, The Westerly Sun 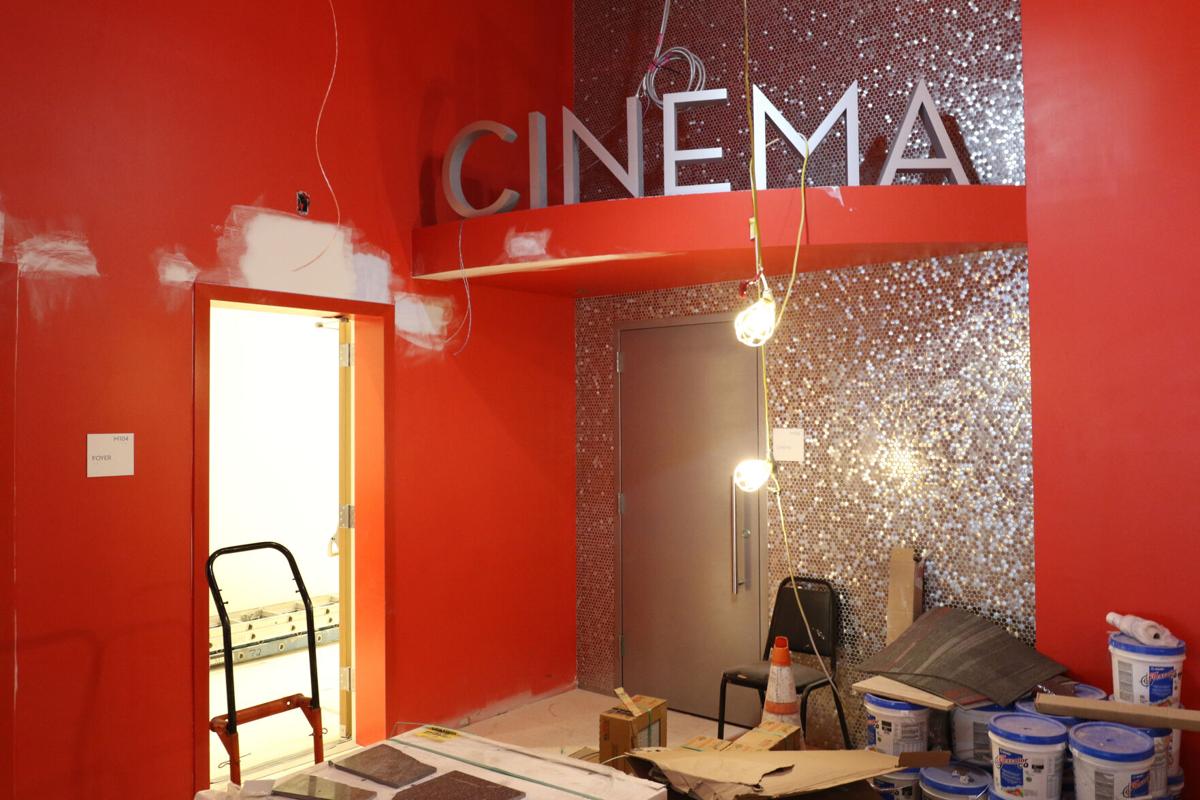 Work continues in the lobby area near the main auditorium of the United Theatre. | Harold Hanka, The Westerly Sun 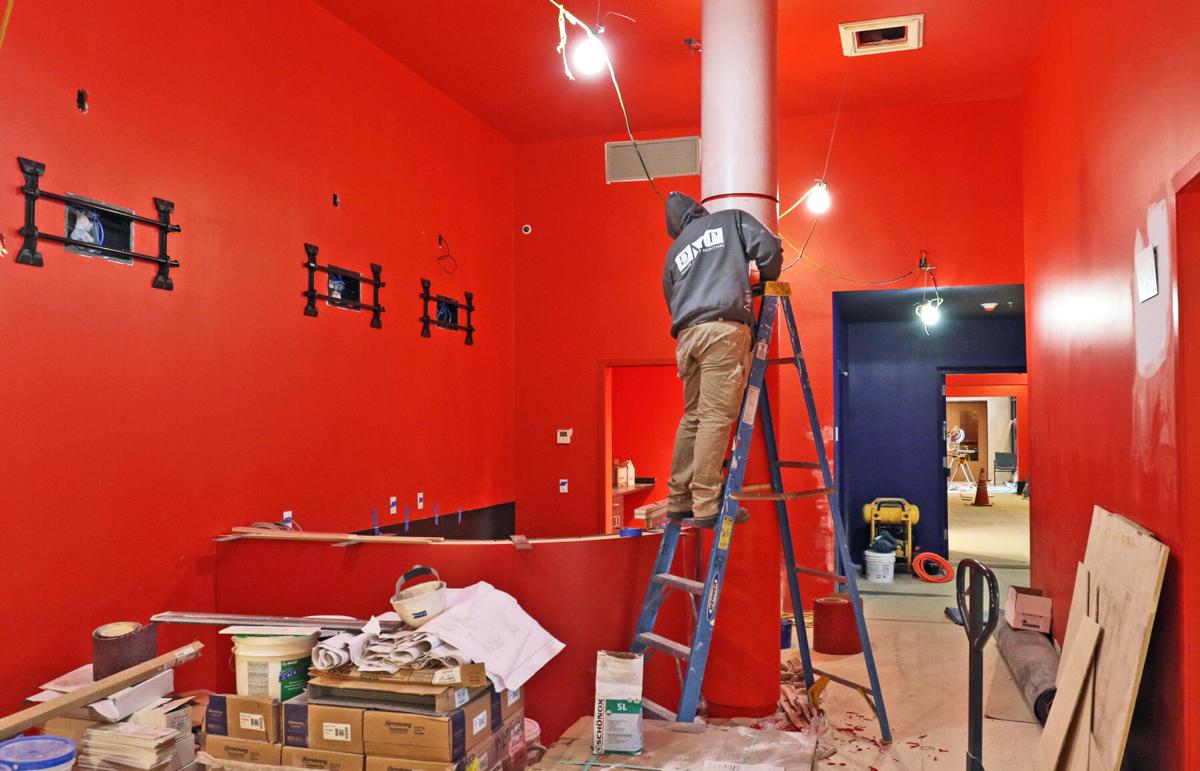 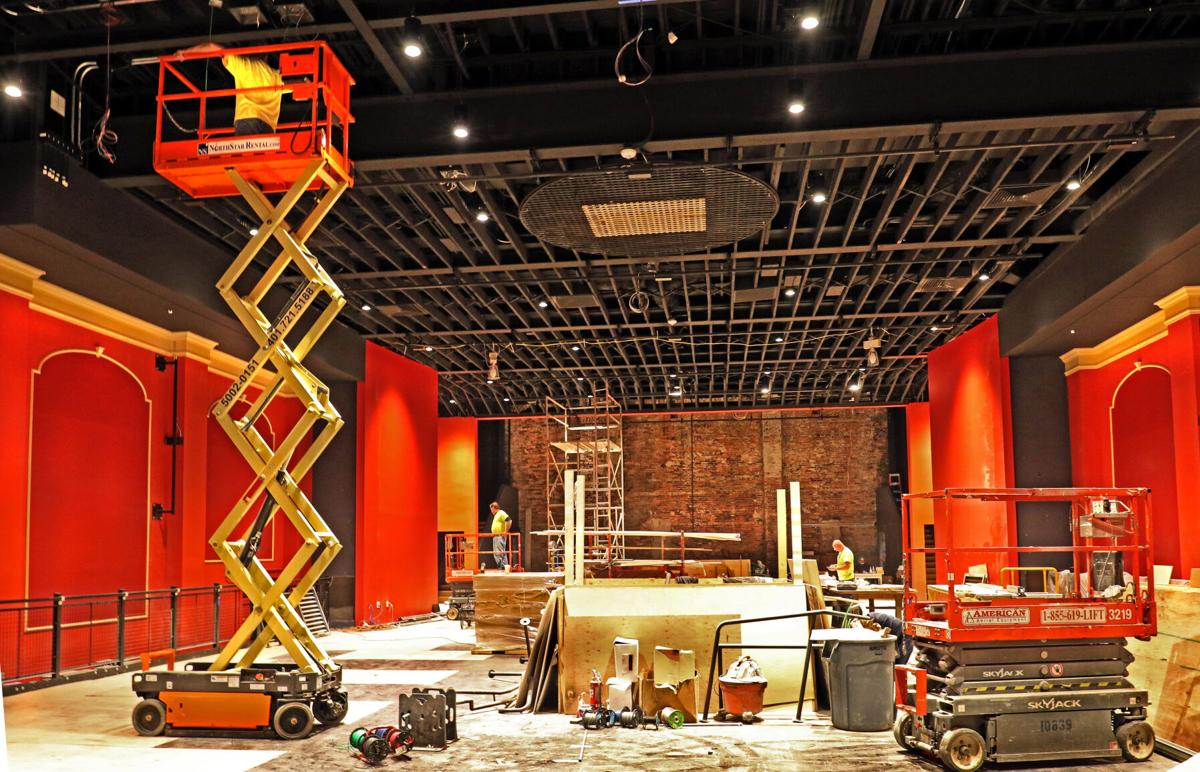 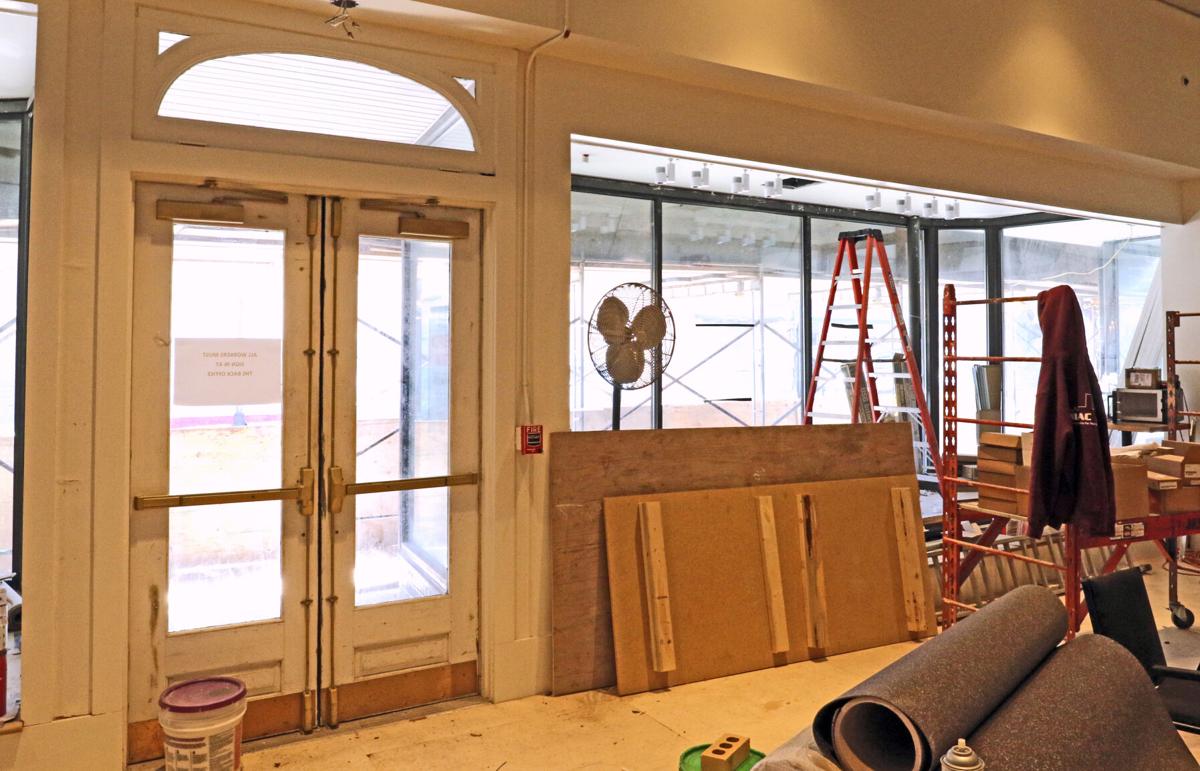 A view of the front entrance to the United Theatre, the former art gallery space. | Harold Hanka, The Westerly Sun 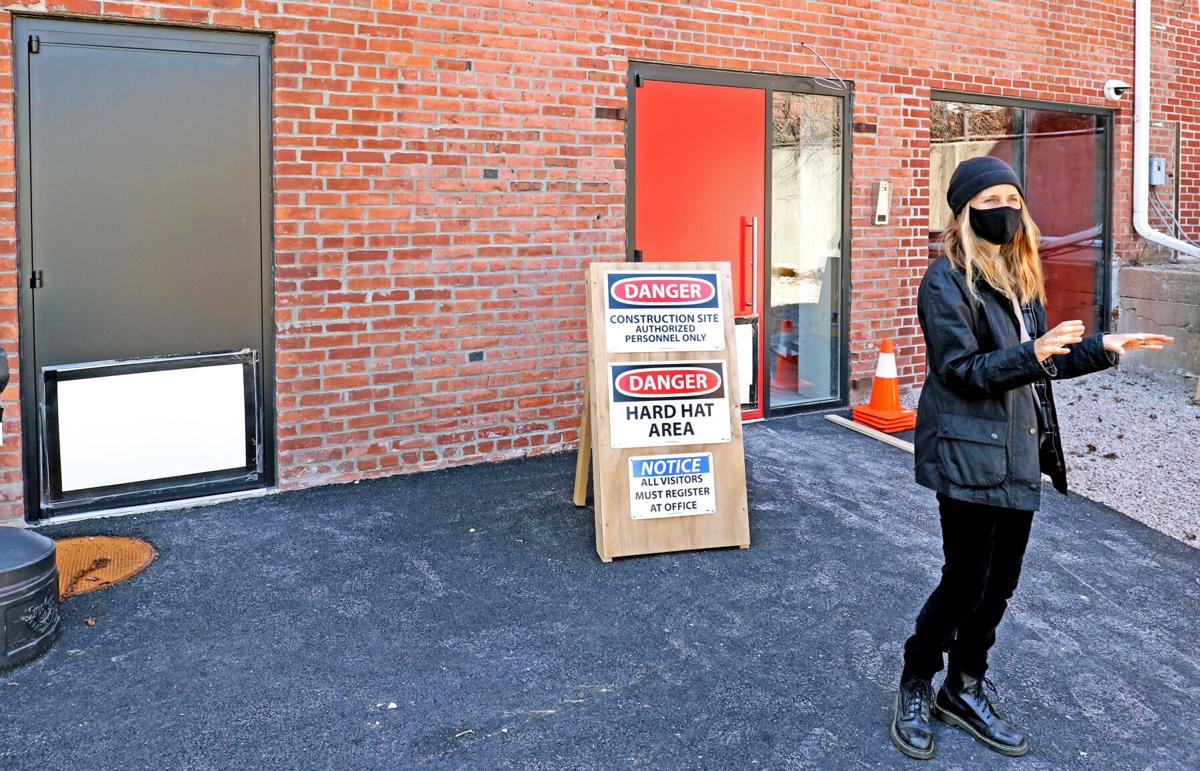 Lisa Utman Randall, executive director of the United Theatre, is pictured above the complex’s theater area. Randall led a group tour to show the progress being made on the renovation of the theater last Tuesday. | Harold Hanka, The Westerly Sun

Work continues in the lobby area near the main auditorium of the United Theatre. | Harold Hanka, The Westerly Sun

A view of the front entrance to the United Theatre, the former art gallery space. | Harold Hanka, The Westerly Sun

WESTERLY — Film lovers will soon be able to sit comfortably in one of the United Theatre's three state-of-the-art movie houses and enjoy first-run art-house movies every day of the year.

"Three hundred and sixty-five days a year," said a smiling Lisa Utman Randall, the theater's executive director one afternoon last week as she led a group of people on a tour of the building, which is near completion and on track to open in June. "It's going to be amazing."

Amazing is certainly one way to describe the $12 million renovation of the Canal Street property, which includes not only the original United Theatre — which opened as a Vaudeville theater in January 1926 — but the adjacent former Montgomery Ward building.

From the beginning of the renovation, which started when The Westerly Land Trust purchased the theater as part of the Urban Program in the winter of 2006, plans have called to develop the property into somewhat of a "mini Lincoln Center" for the region.

And now, as opening day inches closer, and The United Theatre makes plans to officially open its doors as the region's premier arts complex, the breadth, depth and scope of the project is there for all to see.

While no official opening date has been set, there are a number of films and live events planned for the summer, Utman Randall said, and an upcoming events calendar will be published next month.

"It's just so exciting to be at this point," Utman Randall said as she led the group from the back-door entrance — where she envisions a sculpture pad where local artists and "artists from afar" can share works — through the downstairs area where the Rhode Island Philharmonic Music School will be located with its soundproof classrooms, past the elevator, and up the stairs to the main entrance, pausing here and there to point out the green room, the concession area, the art house cinema and finally to main stage.

"There's lots of red," she said with a flourish, motioning toward a brightly crimson-colored wall behind her. "It's all very theatrical ... very dramatic."

The main section — the black box theater area — also includes the 100-plus-seat balcony, which can turn into its own cinema with a series of curtains and a drop-down screen.

Utman Randall said much of the space has been left "intentionally flexible" so people or organizations renting space inside the theater can design it to their liking.

As she walked from the main entrance to the restaurant — which runs alongside the theater, in a space once occupied by the Twisted Vine — Utman Randall stopped at a small glassed-in storefront area facing Canal Street.

"This is the Public's Radio space," she said. "They'll broadcast live from here."

Alex Nunes, the Public's Radio's South County bureau reporter, who plans to occupy the space once the renovation is complete, said he is looking forward to moving in and having access to the professional studio booth.

During these days of the pandemic, he said, he's been working from his Westerly home, where he's recorded many a story from a closet in which coats, jackets and sweaters help muffle sound.

"It will be a major upgrade," Nunes said with a chuckle. "It will be awesome to have access to a professional mixing board."

Although Nunes said he has been getting out into the community to report on local stories despite the pandemic, having such a prominent home base will make a big difference in terms of coverage.

Being in the public eye, he said, will help bring visibility to the station, thus connecting him to more people, and making more coverage possible.

"We'd like to find voices in the community and offer training," he said, training that can give an outlet to new voices and bring more stories into the public.

"We hope to do a lot of co-programming," Utman Randall said, noting that collaboration could lead to podcast development as well.

Utman Randall, who has been giving small, COVID-19-appropriate tours of the space, said the fact that the United's opening will occur during a pandemic, makes it all the more remarkable, exciting and experimental.

"A lot has changed in the world of the performing arts during COVID," she said. "It's a changing landscape."

Arts organizations, musicians, bands, actors and theaters are all trying to adapt, she said, and are experimenting with virtual and live performances. The United would like to be a catalyst and a support, she said, stressing the various rental opportunities available.

"It is very exciting to see," said Mary Carol Kendzia, executive director of Literacy Volunteers of Washington County, who toured the building recently with Utman Randall. "Even if only half of what they hope to have happen happens, it will still be amazing."

Kendzia said she was grateful that Utman Randall reached out to her and invited her on a tour. She and her board members have been discussing the idea of "branching out" and holding more and different special events.

The United would be an ideal space for a Literacy Volunteers-sponsored speakers series, she said, or a film series, or even musical events.

Lisa Konicki, president of the Ocean Community Chamber of Commerce, who also serves on the United board of directors, called the renovated space "vibrant, welcoming ... with a palpable energy of passion and positivity."

The United, she said, "will greatly enhance the cultural offerings in our region and breathe new life into this historic space."

The theater will also be a destination, Konicki added, one that will draw from neighboring communities and "allow visitors to  discover our charming and thriving downtown business district."

"It’s very exciting to have this anchor attraction at that end of downtown," she said. "We expect people will come downtown before shows to eat and walk around town.

"I love that this will be a multi-generational center that will bring a wide range of programs and people together to experience the arts. Between the movies, music school and events, there will something happening every day at the United."

"That’s pretty special when you consider how that will positively impact our downtown shops and restaurants," she added. "I am proud to be serving on the board."

PHOTOS: A following of gulls near the Watch Hill Light

Quahog harvesting expects boost after 35% drop during the pandemic